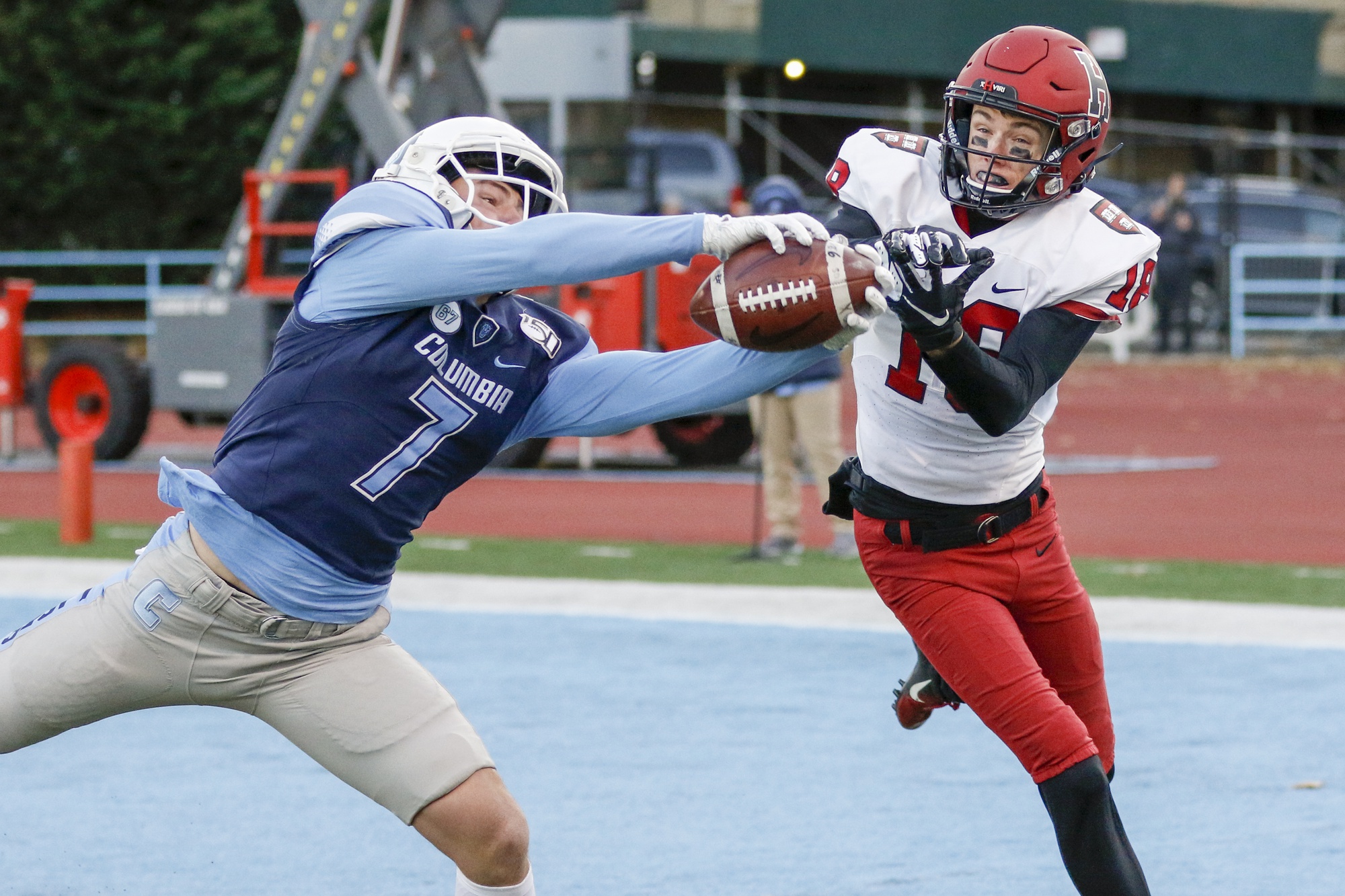 An overtime interception by Columbia defensive back Ben Mathiasmeier sealed the win for the Lions, marking the first time Columbia has beaten Harvard since 2003. By Timothy R. O'Meara
By Joseph W. Minatel, Crimson Staff Writer

NEW YORK, N.Y. — For the second straight week, Harvard football ended its game in heartbreak. The Crimson dropped yet another walk-off contest, this time to Columbia in overtime as the Lions intercepted Harvard late to seal the game, 17-10.

“Today the margin again was very thin,” Harvard coach Tim Murphy said. “It went to overtime and I thought our defense played really, really well. Obviously caught us on a big play in overtime and couldn't reciprocate when we got our opportunity.”

For the second consecutive week, the last play of the game resulted in a clinching win for Harvard’s opponent. Sophomore quarterback Luke Emge, who was substituted late in the third quarter for struggling junior quarterback Jake Smith, lofted a ball down the right sideline intended for junior wide receiver James Batch. Junior defensive back Ben Mathiasmeier undercut the flag route and made a tip-toeing interception down the sideline to secure the Lions’ victory.

Harvard won the overtime coin toss and elected to start its first overtime possession since 2016 on defense. The Crimson defense quickly made its presence felt, starting the period with a sack from sophomore defensive lineman Jacob Sykes. The Lions, however, did not waiver, as Columbia senior quarterback Ty Lenhart found senior tight end Rory Schlageter for 25 yards down to the Harvard one-yard line. Sophomore wide receiver Mike Ruossos would punch in the score on the ensuing play to give Columbia its first lead of the day, 17-10.

The Crimson offense, knowing that it needed a touchdown to stay alive, would not give itself much of a chance to do so. On the first play of the drive, Emge’s throw down the sideline was intercepted by Mathiasmeier, and Columbia celebrated victoriously.

“I thought we played well defensively,” Murphy said. “We didn't score enough points, we gotta score points. And we’ve struggled a little bit to do that the last couple of games.”

The struggling offense attempted to change up its recent woes by making a personnel switch late in the third quarter, swapping its starting quarterback Smith for the backup Emge.

“I just felt like we needed a spark,” Murphy said. “I couldn't guarantee that we were going to get a spark from putting another quarterback in, but Jake just didn't have it today, and I thought Luke came in and did a very solid job. But at the end of the day, it wasn't a quarterback thing, it wasn't a one person thing, we just were not consistent enough.”

The second half started without much incident, as the defenses reigned supreme. Three consecutive punts to start the half kept the quarter moving along. On the third punt, a muffed punt from the Crimson led to a scramble for the ball. The fumble was eventually recovered by Harvard, seemingly ending the excitement. A late flag just outside the scrum, however, resulted in a targeting call against Columbia, but a review overturned the flag and returned the second half to its slow pace as Harvard would soon punt following a three-and-out.

Discontent with the back-and-forth play resulting from four consecutive punts, the Lions elected go for it on fourth and short once again. For the third time in the game, Columbia was stuffed by the stout Crimson front for a turnover. 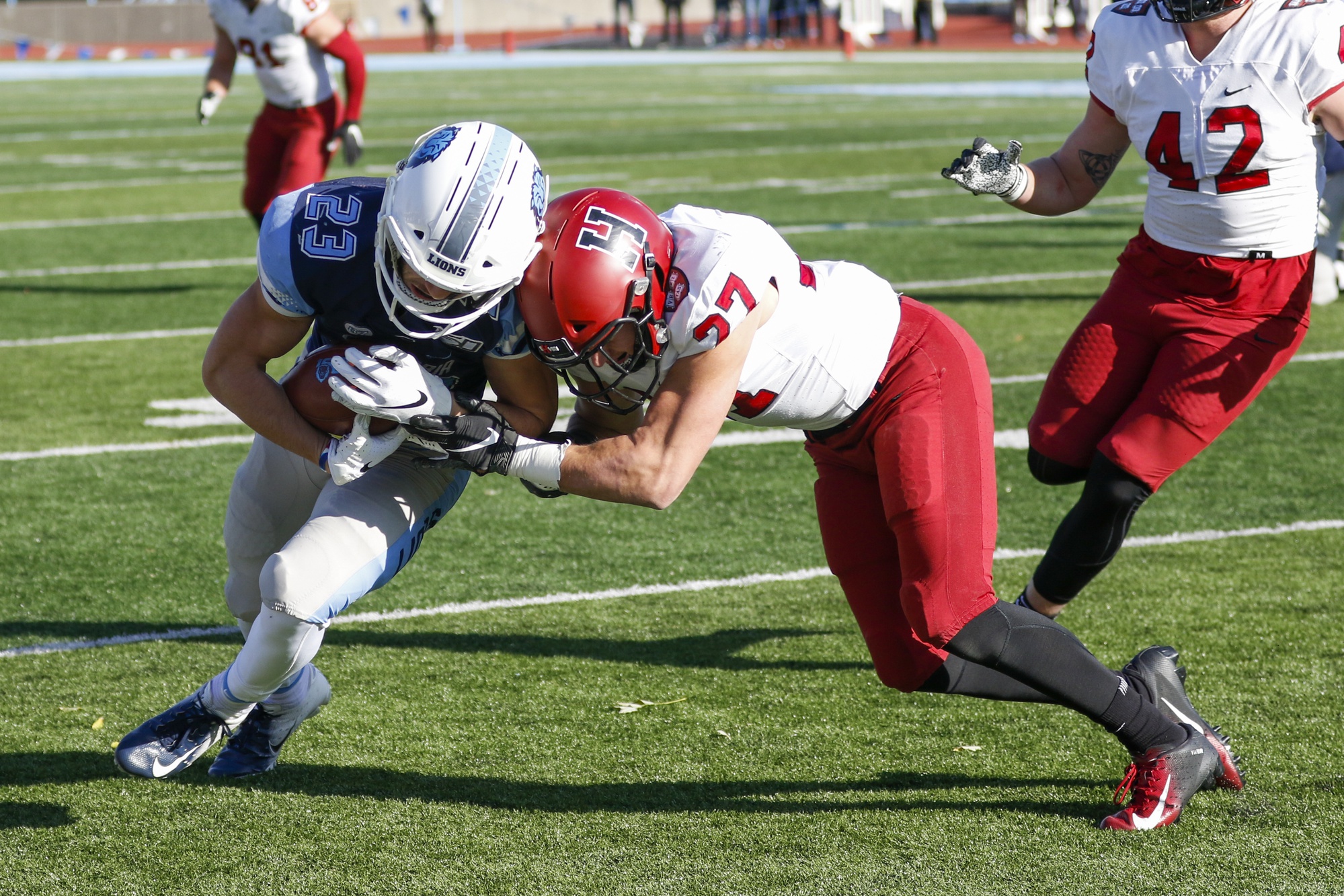 Harvard took the turnover as an opportunity to change the script of the early third quarter. Swapping out the struggling Smith, who was 6-for-16 with 111 yards, one touchdown, and no interceptions, the Crimson entered Emge into the game. Harvard attempted to change the pace, taking three immediate deep shots through the air, connecting with junior tight end Ryan Reagan for an acrobatic 26-yard reception. The spark was just enough to push the Crimson into the red zone, taking the 10-7 lead thanks to a 25-yard field goal from senior kicker Jake McIntyre with 13:22 to play in the game.

The Ivy League’s worst ranked rushing and passing offense refused to roll over, however, as Columbia finally gained its first conversion on its fourth attempt at a fourth and short. The Lions would come up just short of points, however, as junior defensive back Max Jones would secure an interception at the Harvard one-yard line, his second consecutive game with a pick. 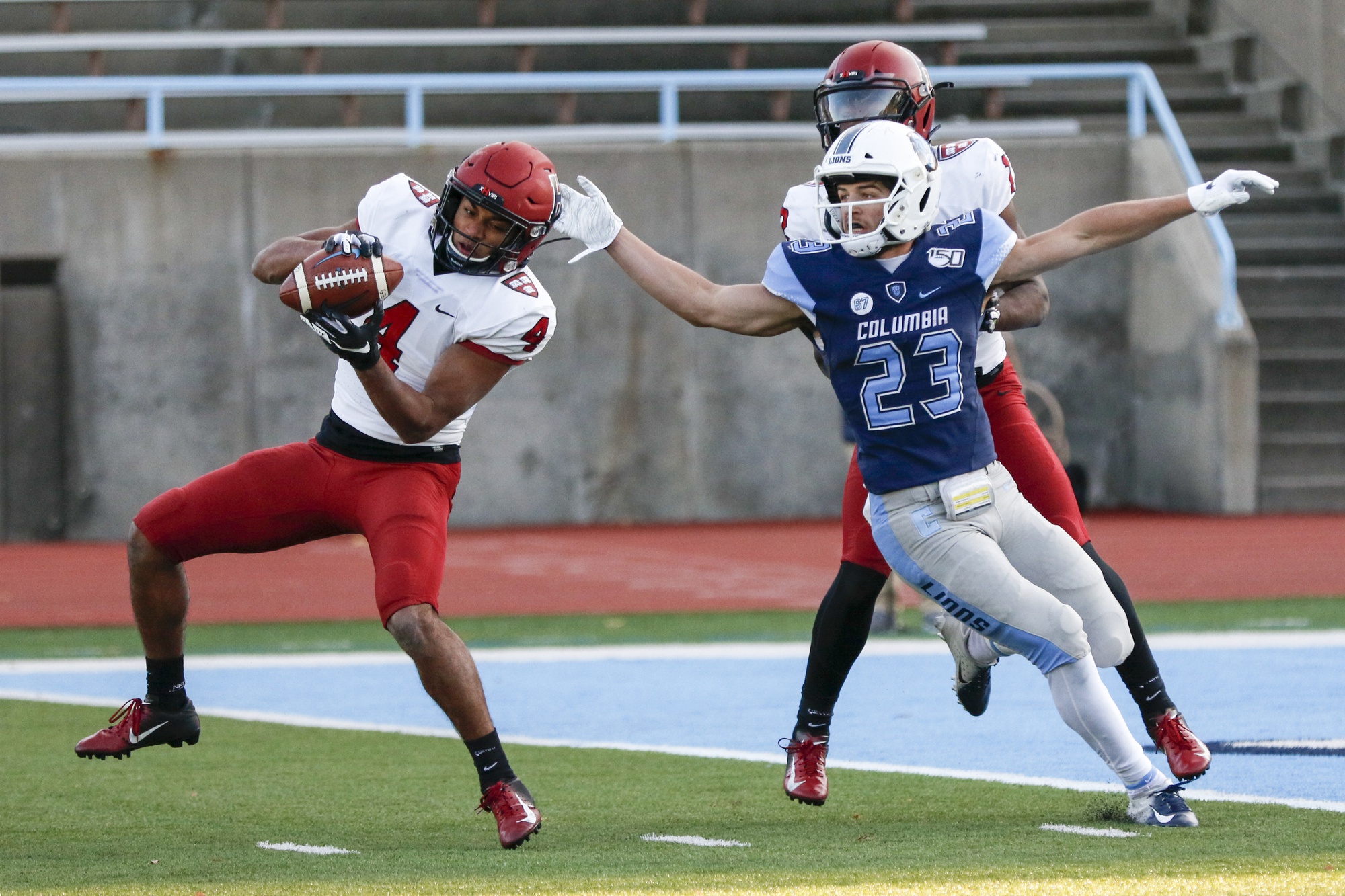 Backed up deep into its own territory, however, the Crimson would be forced to punt, giving Columbia the ball in excellent field position at the Harvard 47-yard line.

The Lions slowly but surely marched down the field, running the clock inside of two minutes heading into a third and goal from the eight-yard line. Once again, Jones came up big in the red zone and broke up a pass in the end zone to prevent the touchdown and force Columbia into a 26-yard field goal, tying the game 10-10 with 1:45 to play.

The Crimson offense stalled on its next drive, with the Lions forcing a quick three-and-out. Emge was forced into a hurried throw well behind the line of scrimmage, tossing the ball directly into the hands of Columbia junior defensive lineman Oganna Oradeu, but, luckily for Harvard, the pass was dropped and the Crimson would punt.

The Lions would start the drive at its own 30-yard line, but the field position would not matter. Despite calling timeouts on defense to preserve a manageable 1:22 on the clock for the offense to attempt a game-winning drive, Columbia elected to run the football twice in extremely conservative fashion and take the game into overtime as the home crowd barraged the stadium with boos.

“We were into the wind, and we really would have had to get the ball down to probably the 30 to have a realistic chance,” Columbia coach Al Bagnoli said. “I think you have to take calculated risks.”

As with the result, Harvard’s first few minutes of football mirrored last week’s contest as well. The offense stalled on the opening possession, quickly punting on a three-and-out. Keeping its momentum, however, the defensive front stood tough. Facing a fourth down and two to go at midfield, Columbia made the gutsy call to go for it. The Crimson defense stuffed the run and forced the ball out, with sophomore defensive lineman Chris Smith scooping up the ball and switching possession.

Harvard wasted no time in capitalizing on the takeaway. A pass from junior quarterback found senior wide receiver Cody Chrest, who weaved his way down the sideline for 27 yards. The very next play, Smith dropped a ball into the back of the endzone as Batch hauled in the catch for a 22-yard touchdown, giving the Crimson a 7-0 lead less than five minutes into the contest.

Harvard started its next drive right where it left off, with a blatant Columbia pass interference well downfield drawing an obvious flurry of flags, gifting the Crimson 15 free yards on its first play. Later in the drive, facing a third and seven, another obvious tackle in the secondary led to yet another pass interference call, keeping the drive alive. A later third-down sack from a pack of Lions, however, saved the drive and forced a Harvard punt.

On its third drive, the Columbia offense finally showed some life. Finally moving the chains for the first time in the ballgame, the Lions quickly marched down the field. Once they moved into enemy territory, however, the miscues returned. A penalty erased a third-down conversion, and the ensuing punt was blocked by sophomore safety James Herring. The specialist used a little help from his facemask to block his third punt of the year, and the Crimson as a unit have blocked a nation-leading six punts.

“That particular special teams unit has been coming up big for us many times this year, and James has a particular knack for it,” Murphy said. “I felt we put him in a good position, and it was a really big play. We needed to take advantage of it.”

Following a Harvard three-and-out to start the second quarter, the Columbia offense picked up the momentum broken by the penalty and blocked punt. Recovering a lucky bounce on a fumble on a punt return, the Lions methodically marched down the field once again. This time around, a Crimson pass interference would setup a first and goal. Lenhart took a shot from multiple Harvard defenders as he floated a ball to the back of the endzone. With no defenders seemingly in the same zip code, sophomore wide receiver Mozes Mooney had only gravity to outrace. Catching up to the pass in the corner of the endzone, the receiver extended his arm and hauled in a diving, one-handed snag to tie the game.

An apparent interception from Smith seemed to keep the momentum in the Lions’ favor, however, Columbia’s fourth pass interference in the first 25 minutes of play took the turnover off the board. The Lions quickly regained steam, stopping the Crimson on fourth and two by stuffing freshman running back Aidan Borguet for a loss of 10 to switch possession. Columbia would attempt its own fourth down on the Harvard 35-yard line, once again coming up short on fourth and two. 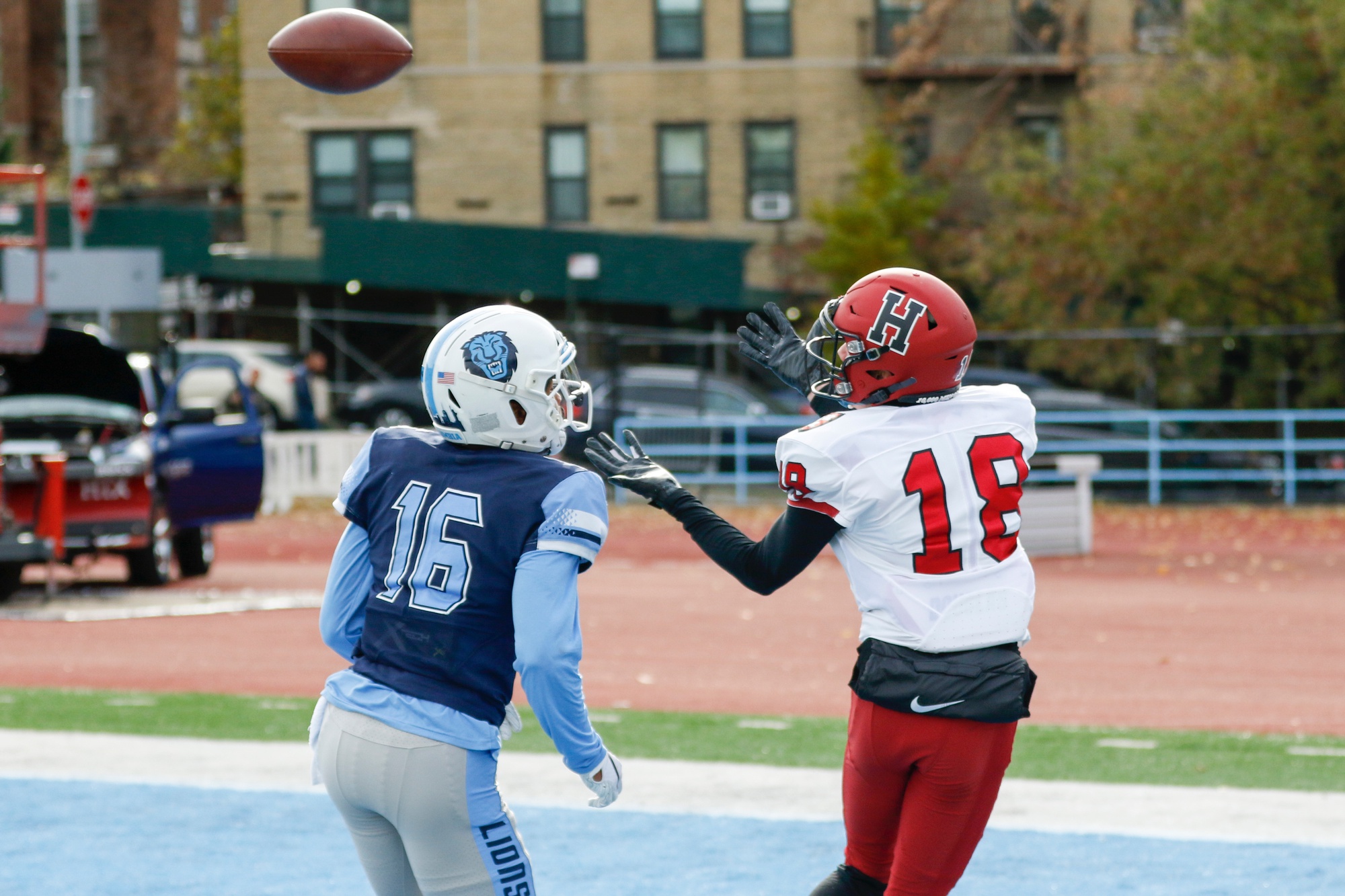 Junior receiver James Batch hauls in a touchdown pass in the back of the endzone to give the Crimson an early 7-0 lead. By Timothy R. O'Meara

The Crimson quickly took advantage of the defensive stop, as Smith found Chrest for a 39-yard gain on the opening play of the drive. An unsportsmanlike conduct penalty on Chrest following the play, however, would reduce the net yardage to only 22. For the third consecutive drive, a stop on fourth and short would flip possession. Both teams would head into halftime 0-for-2 on fourth down, with this recent failed conversion enough to take the game into the break and clear the field for Columbia’s recently reinstated marching band.

As the final script would show, the defensive matchup continued throughout the game, with only six total points being scored throughout the rest of regulation. Fittingly, a defensive play would conclude the contest in the Lions’ favor.