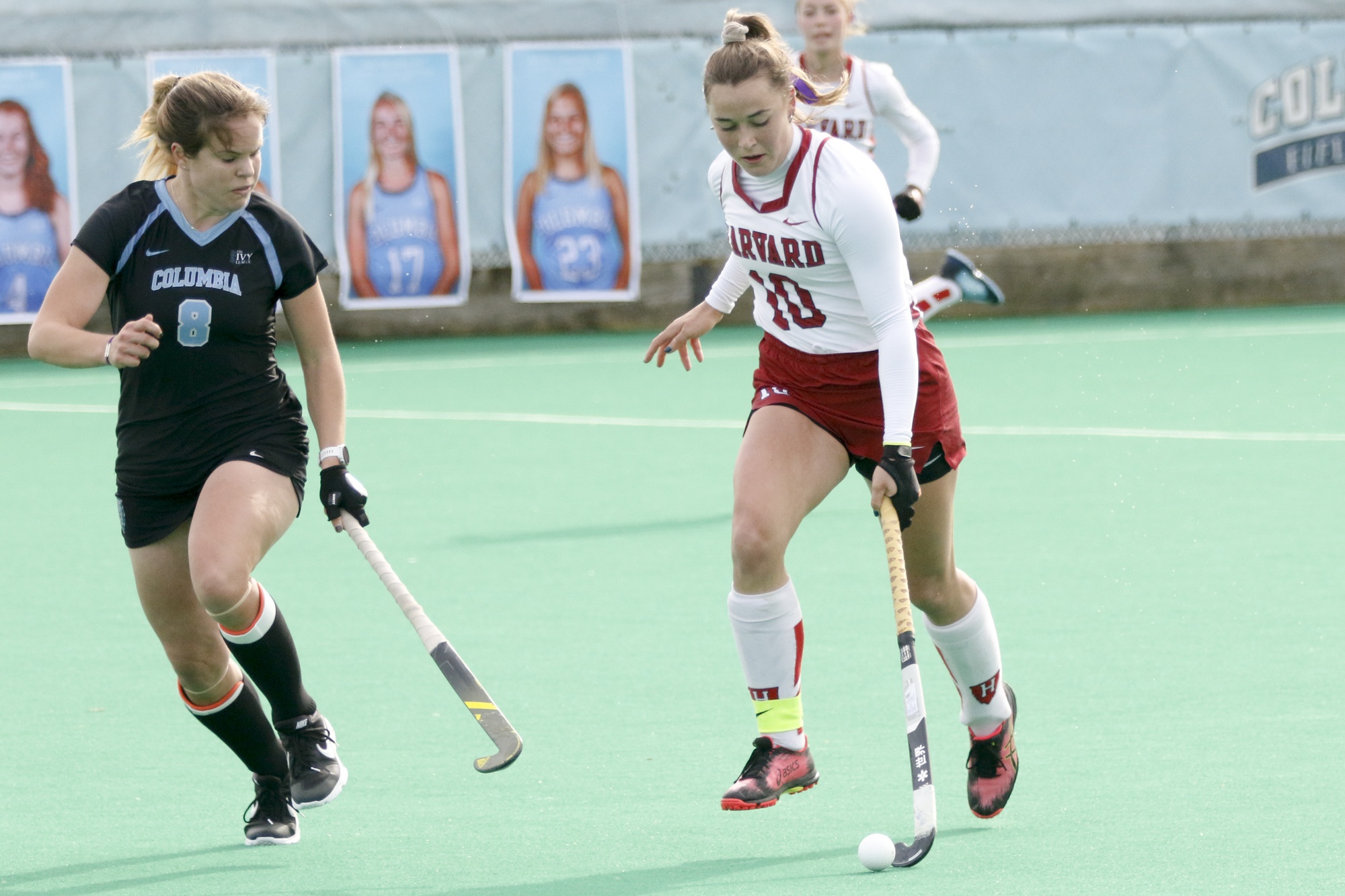 Senior Bente van Vlijmen moves the ball up the field in the final game of her career.
By David Aley, Contributing Writer

Huddling in a circle on a brisk morning in New York City, donned with purple ribbons in their hair and around their arms, the athletes on the Harvard Women’s field hockey team were motivated to win for a few particularly meaningful reasons: to make the best of their last shot at impressing the NCAA voters in hopes to receive a bid for the NCAA tournament selection, and to raise awareness for Meningitis, a neurological disease that affected one of the members of the team, senior forward Maddie Earle.

“Obviously, the game was super important to us, both from a field hockey point of view, as well as due to the fact that [Earle] and [senior midfielder] Olivia Ostrover had organized it as a Meningitis Awareness game,” said junior captain Mimi Tarrant. “I really think that honoring the game for that cause helped us keep everything in perspective. Our main message before the game was to enjoy playing and to play for those who maybe aren’t able to.”

The No. 15 Crimson women (13-4, 6-1 Ivy League) defeated Columbia (7-9 3-4 Ivy League) by a score of 2-1 in the final regular season match of the season. Led by a pair of goals by captain Bente van Vlijmen in the first and third quarters, the Harvard team reached 13 wins for the third straight year, a first for the program.

But to van Vlijmen, although the team came out with a win, there is still much room for improvement.

“We really had to show the NCAA and the people who make the decision for the bid [in the NCAA tournament] in this game that we can take on teams and really dominate them,” said van Vlijmen. “We only beat them by two to one, and that, I think, was a little bit of a disappointment because I know we can do better as a team.”

Although a few unfavorable circumstances threw the team off their game—a frozen field Friday night forced the game to be moved to Saturday morning—van Vlijmen didn’t want to make excuses for the team. It was a game where the Crimson expected to win and win big, so a finish as close as this one showed the team that they need to be more focused and ensure they don’t underestimate any more teams moving forward.

Still, van Vlijmen made sure that the team didn’t walk away without a few highlights. At 12:38 in the first quarter, she put in a shot during a designed play on a penalty corner shot.

“I think [the designed play that led to the goal] really was a big team effort and if one of those little parts of the chain doesn't go right, nothing will go right,” said van Vlijmen. “You score as a team and not as an individual.”

It wasn’t until around four minutes into the third quarter that Harvard netted its second goal, and van Vlijmen noted that the team struggled for a while to find its flow and structure with the offense.

“I started on [Columbia’s] 25-yard line, and when that happens, I really don’t think I just try to put all my power behind what I do and try to be decisive and quick,” said van Vlijmen of the second goal. “We had all hoped that we had scored [the second goal] a little earlier on, but it was still a very important goal.”

The second goal put van Vlijmen in second place on Harvard’s all-time points list. And while she feels grateful to be recognized for such an achievement, the senior noted that this was in no small part due to the help of the rest of her teammates. Without the help of her teammates, especially the defenders, who seldom get recognized van Vlijmen explained, the achievement would not have been possible.

While the Crimson women eventually learned that they did not earn a bid into the NCAA tournament after the selection of teams on Sunday evening, both van Vlijmen and Tarrant had time to reflect on the season.

“Our team has definitely taken big strides this season,” Tarrant said. “With nearly a whole new backline coming in as we got six new freshmen, it was always going to take a bit of time to gel as a new team. Luckily, we managed to do that pretty early on, and we have definitely seen our freshman grow in confidence throughout the season. I think what has been most rewarding to see is the variety of people who have stepped up to take responsibility for the team.”

And in her final season with the team, van Vlijmen is optimistic about the future of the team.

“Overall, I think we’ve shown that this program can compete at the top now,” van Vlijmen said. “We played some games incredibly well, and some games not as well, so I think a huge area where we can grow in as a team is finding consistency and utilizing our talent.”