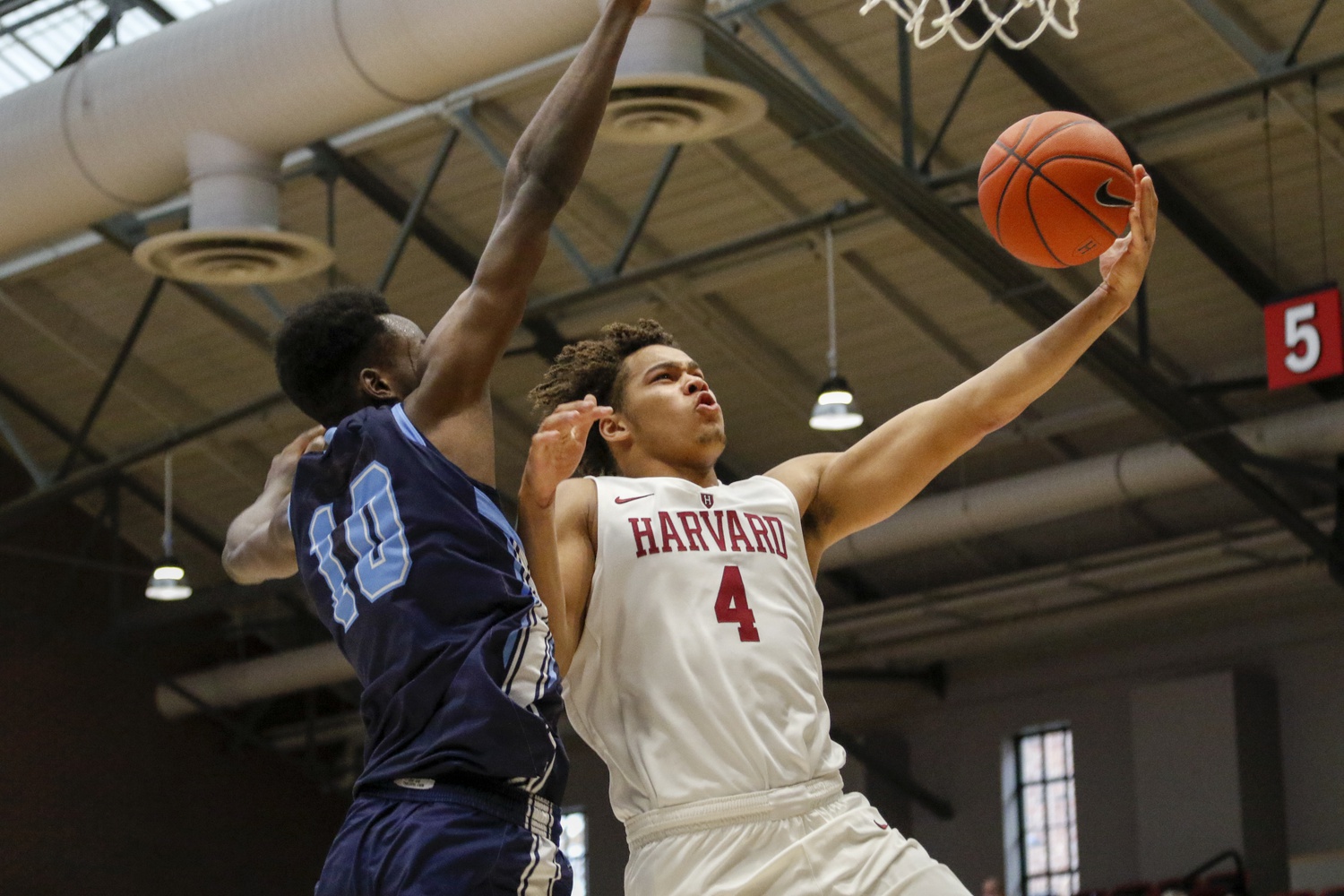 First-year Chris Ledlum drives in for a lay-up against Maine on Sunday. By Timothy R. O'Meara
By Mahtab Shihab, Crimson Staff Writer

Harvard men’s basketball blew out Maine 67-46 this past weekend thanks to a dominant defensive effort in the second half of the game.

The Crimson came into Lavietes looking to avenge a tough road loss to Northeastern that saw the team give up a school-record 44 points to senior captain Jordan Roland.

Despite Harvard (2-0) being heavily favored against the Black Bears(1-1), defending its home court would be difficult without the services of seniors Bryce Aiken, Seth Towns, and Christian Juzang. The Crimson was able to able to respond to this adversity coming off a quick turnaround from its loss to the Huskies.

“I think our kids in terms of what we talked about going into this, regrouping and responding and it’s impressive to me how they were able to do that,” coach Tommy Amaker said. “And again, we’re coming off a loss and those kids, you know, have to kind of show that they were veterans and savvy and also tough, so it was very impressive to me.”

Harvard’s victory did not come easy, as the Crimson’s first half woes continued against the Black Bears. Harvard struggled to score from the perimeter early on and allowed Maine to have easy scoring opportunities off turnovers and offensive rebounds. The Black Bears won the rebounding battle 20 to 14 in the first half and limited the Crimson to 43 percent shooting.

Harvard would go through significant stretches in the first half where the offense stalled, including two separate four-minute intervals where it couldn’t score a single point. The team made only one three pointer in the frame before the final possession and never had the lead in the first period following the 15 minute mark.

As has been the case in its last two games, the Crimson came into the second half with renewed energy and focus. The team played stalwart defense, holding Maine to only 15 points on 23 percent shooting. The strong defensive play was a result of Harvard’s depth and balanced scoring, which wore down the Black Bears’ offense.

“I thought our defense was outstanding in the second half,” Amaker said. “I thought we were able to wear down [the opponents], something we were hoping to be able to do this season. We used our depth and had it become a factor. Just very pleased with our growth from the last game.”

The increased communication between players improved the flow of the offense in the second half where the Crimson shot 62 percent. The team had eight assists in the period as opposed to the three they had in the first half.

“All of us interchanging [in the offense] know helping each other out, it goes a long way over the course of the game, so I think that was the biggest thing,” junior guard Rio Haskett said. “We’re moving that ball around and getting touches going inside out. I think that goes a long way with everybody getting a feel for the game, and you know, they get more comfortable, and play better together.”

With the team missing some of its key players, it was important for the bench players to step up and play a bigger role. First-year guard Chris Ledlum, playing in just his third collegiate game, brought much needed energy and hustle, contributing nine points and six rebounds. 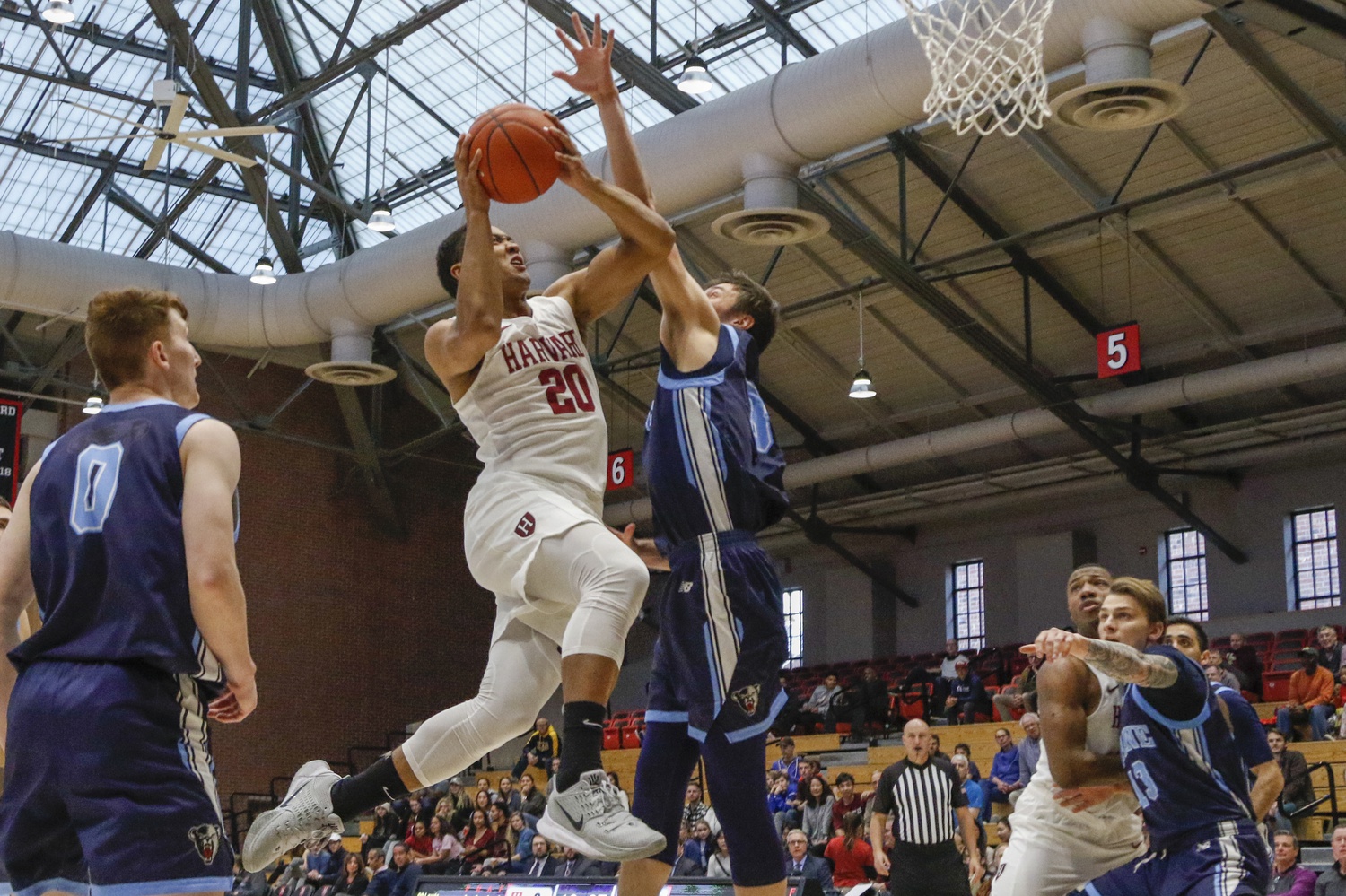 With the bevy of injuries facing the Crimson early in the season, senior Justin Bassey has assumed a more significant role on offense. By Timothy R. O'Meara

“He’s one of the most athletic guys I’ve seen in awhile,” senior forward Rob Baker said. “He’s a very special talent and he’s gonna flourish this year for sure.”

Along with Ledlum, the play of junior guard Rio Haskett, was critical to rejuvenating Harvard’s offense. The Richmond, V.A. native led the Crimson with 14 points, and made several pivotal plays, including a three pointer to end the first half.

“He has a much more mature game and you know is playing smart on the floor and using his athleticism the right way,” Amaker said. “He's having fun playing and it's nice to see him rewarded you know with some solid play and certainly had his hands all over this game for us here this afternoon.”

Harvard’s improved bench play and lockdown defense was too much for Maine to handle in the second frame. The Black Bears’ bench only scored two points in the game as the Crimson cruised to victory in the waning minutes of the game.

Harvard hopes to remain undefeated at home as it continues its non-conference slate against Siena on Thursday.