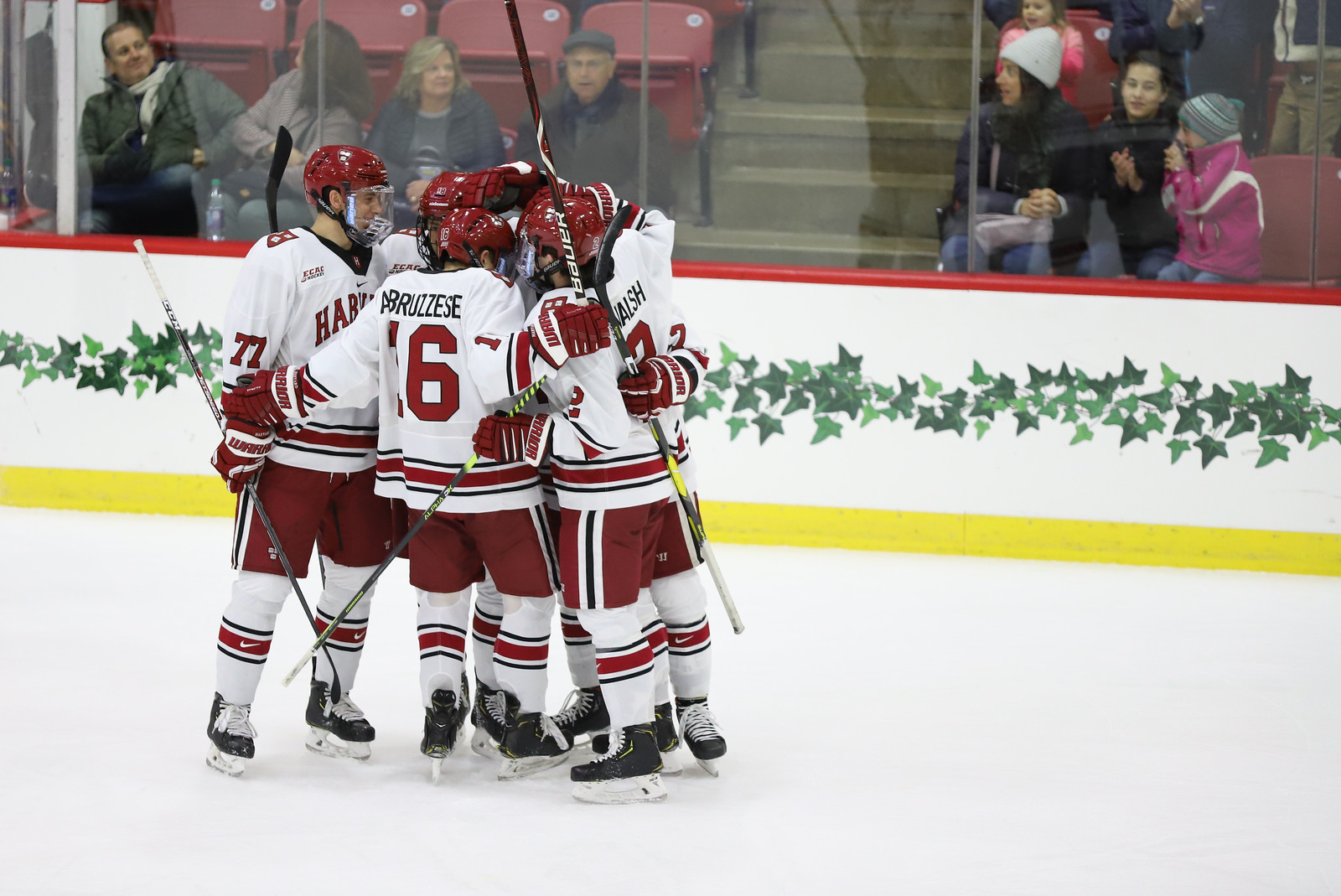 The Crimson is off to its best start to a season since 1993-1994. By Quinn G. Perini
By Spencer R. Morris, Crimson Staff Writer

In 2018-2019, the Harvard men’s hockey team entered the campaign’s third week still looking for an elusive first victory. After suffering the longest winless start to a season in eight decades, the squad finally notched the win column when it visited Brown.

As with any ambitious program, though, a promising opening slate has not fostered any complacency among Crimson coach Ted Donato ’91 and his group.

“I didn’t think we played very well in the first period,” the bench boss said. “Even though we came out of the period with a 1-0 lead…too often in the game we were just getting beat to loose pucks. And I give [Brown] credit. They looked like they were hungry.”

With one minute remaining in the second period, the Crimson powerplay cashed in on the eventual game-winner. Junior blue-liner Reilly Walsh ripped a one-timer home from his usual man-up office courtesy of a cross-ice feed from freshman winger Nick Abruzzese.

The goal, Walsh’s first of the year, should serve to ignite the offensive defenseman, who is off to a modest start production-wise — only by his standards, as he is coming off a near-point-per-game sophomore campaign (12–19—31).

Abruzzese’s primary assist on the play was the first of his two helpers on Friday, which give him sole possession of Harvard’s scoring lead through four contests. The Slate Hill, N.Y. native has made an immediate impact with the Crimson’s first forward line, picking up points in each game this season en route to a two-points-per-game pace (2–6—8). The dish to Walsh marks Abruzzese’s first powerplay assist as part of the team’s top unit.

“[Abruzzese is] super skilled, very competitive, and he’s one of these guys that passes the puck, it seems, almost always at the right time,” coach Donato said. “He’s equal parts playmaker and goal-scorer…. He’s very slippery on the powerplay. He’s got an element of speed, too.”

Thanks to the late-period strike, Harvard took a lead into the locker room after 40 minutes. A strong first five to open the final frame, featuring two even-strength goals, distanced the Crimson from the hosts and sealed victory.

Within 90 seconds of the third-period faceoff, sophomore R.J. Murphy continued his stretch of solid performances when he broke up a play in the neutral zone and called his own number on the ensuing three-on-one rush, finding twine on Bears net-minder Luke Kania (4 GA, .846 SV%). Murphy has pocketed three points (1–2—3) in his last two games and is plus-four in that span, filling out Harvard’s nominal second line alongside impact juniors Henry Bowlby and Jack Badini.

Just three minutes later, sophomore forward Casey Dornbach put the dagger in the Bears, firing a wrist shot from the left circle over Kania’s far-side pad. After a stellar freshman campaign (7–22—29) worthy of ECAC Rookie of the Year honors, Dornbach is firmly in the mix again this season to be among the group’s scoring leaders.

“In the third period, I thought we played much better and started to win some battles,” coach Donato said. “Our message in the second was, ‘Hey, we haven’t played great here, [but] we have a one-goal lead.’ It’s not often you get a chance to go out and have one real good period and win a game, and that’s kind of what we did.”

A major factor in the Crimson’s undefeated start to the 2019-2020 schedule resides in the crease. After senior Cameron Gornet (1-0-0, 3.00 GAA, .936 SV%) posted a solid outing in the team’s season-opener against Dartmouth, coach Donato opted to give freshman Mitchell Gibson (3-0-0, 1.00 GAA, .968 SV%) his first start of the season. A 31-save shutout win against Princeton earned Gibson the start the following night, when Harvard trounced a ranked Quinnipiac team.

With his first NCAA weekend — and an impressive one at that — under his belt, the first-year tender heard his name called again on Friday and recorded yet another sturdy performance (1 GA, .966 SV%).

The only blemish on Gibson’s sheet against Brown came in the second period, when junior forward Chris Berger broke through on the Bears’ second man advantage opportunity of the night.

“He’s calm in there, he’s square to the puck a lot,” said coach Donato after Gibson’s pair of starts last weekend. “We feel like we’re in a good spot. We have two guys we have faith in that are going to give us a solid effort…. Having faith in more than one goalie is usually a good sign for your team.”

Berger’s second of the year evened the tilt after Harvard’s ice-breaker, which came more than 20 minutes earlier in the opening frame. For the third straight game, Bowlby potted a puck on the rush. The junior received a stretch pass from freshman defenseman Ryan Siedem and showcased his speed as he streaked down the left side before finishing in-alone on his backhand. Siedem’s two-line apple marks the first point of his young collegiate career.

Through four games, the Crimson has received notable production from its top two forward lines, among other skaters. Both trios are anchored by reliable two-way centermen, with sophomore Jack Drury pivoting the first pairing and Badini manning the second.

A critical but oft-overlooked element of these centers’ contributions is their aptitude in the faceoff circle. Last season, Badini won 66.0 percent of his draws, good for second-best in Division I. Drury’s 58.2 percent clip was among the top 20 nationwide.

On Friday, Badini won 10 of his 14 draws, and Drury won 11 of 19. As a skilled Harvard team looks to continue its successful stretch to begin the season, puck possession will remain a key enabler of the group’s effective high-scoring style.

“[Faceoffs are] something, as my career has progressed, I’ve taken more pride in,” Badini said. “Playing triple-A hockey growing up, my teams liked to run a lot of faceoff plays, so if you can’t win the faceoff you can’t run the play.”