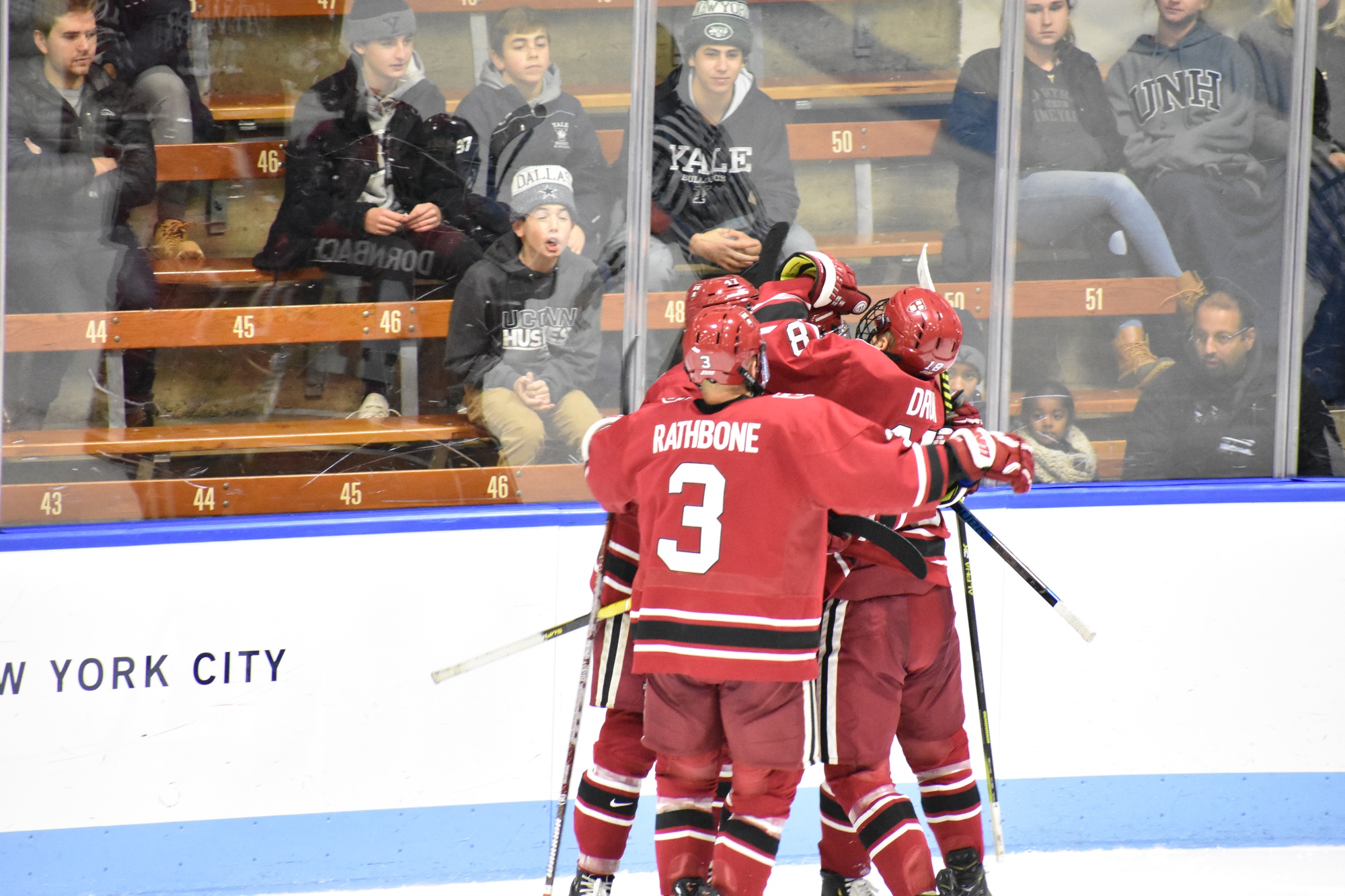 NEW HAVEN, Conn. — In another chapter of a storied rivalry, the No. 13/12 Harvard men’s hockey team faced off against Yale to finish the young season’s first road trip. Thus far, the Crimson’s offensive power and quick-strike ability had made up for the squad’s occasional puck mishandling. Facing a struggling Bulldogs team, Harvard looked to collect another two conference points and add another notch to its undefeated play.

In the end, the Crimson’s performance was a microcosm of the season so far. The visiting team capitalized on its chances, and solid goaltending nullified its defensive errors, as Harvard (5-0-0, 5-0-0 ECAC) defeated Yale (1-5-0, 1-5-0) by a score of 6-1. Two goals from rookie forward John Farinacci and a stellar showing from senior net-minder Cameron Gornet (1 GA, .976 SV%) put the contest beyond reach for the hosts.

“[We’re] always excited to be able to come here and get two points,” head coach Ted Donato ’91 said. “I thought we just battled. It’s a tough place to play, obviously.” 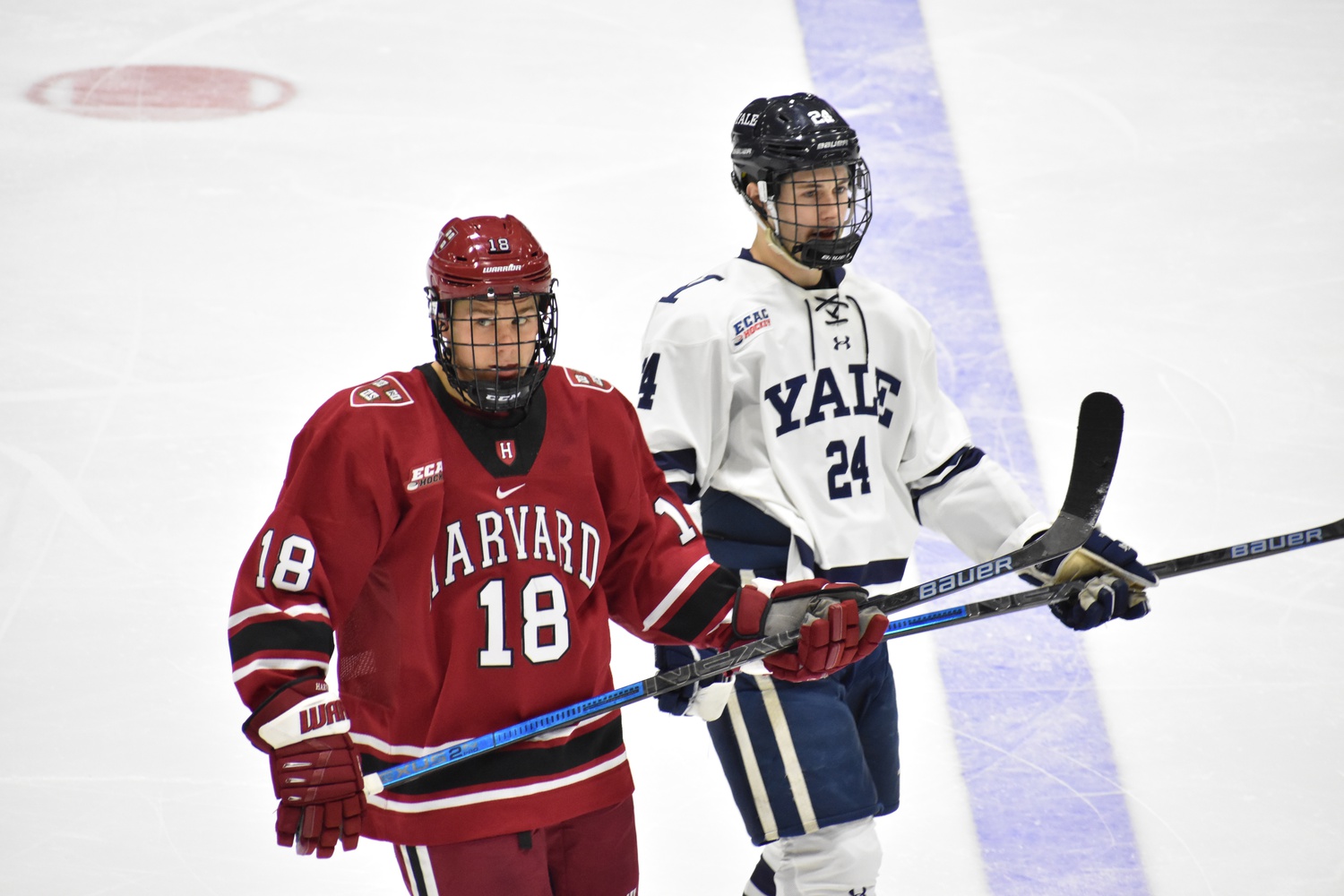 Clashes between the Crimson and the Bulldogs tend to be fast-paced and close, but it took Harvard less than a minute to take the lead on Saturday. By Amanda M. DiMartini

Just 50 seconds into the game, Yale got a taste of the Crimson’s punishing offense. In the Bulldogs’ zone, Harvard junior forward Henry Bowlby found himself surrounded by opponents but managed to get the puck to sophomore linemate R.J. Murphy. Murphy made no mistake, putting the puck by senior net-minder Corbin Kaczperski to give the visitors the early lead. Murphy now has goals in three straight games, while Bowlby has netted points in each of the past four tilts.

The Crimson doubled its lead as the first period came to a close. Freshman defenseman Henry Thrun shot the puck from the left point, where Farinacci collected it at the side of the net and banked it in off Kaczperski.

“I really don’t know how that went in,” Farinacci said. “I saw [Thrun] shoot it from the point. I went behind the net and tried to wrap it around, and I think it might’ve hopped up the goalie’s pad and off his helmet and in…. But you’ve got to take [goals] how you can.”

The Bulldogs’ own pace brought plenty of chances, however. The hosts were the beneficiaries of a too many men penalty assessed against Harvard in the first, as well as three more minor penalty calls in the second. Gornet, who played backup to rookie Mitchell Gibson for the previous three games, was up to the task.

“I think every team, especially Yale, they’re going to want to try and get in my grill,” Gornet said. “Maybe they saw that I hadn’t played in three games, and so they thought maybe they could get into my head. But…at the end of the day I think I would prefer a game where I get a lot of shots.”

With Yale attempting a comeback from the outset of the contest, Gornet faced a barrage of shots but was able to turn them all aside — by the halfway mark, the Bulldogs had put up 20 shots already. 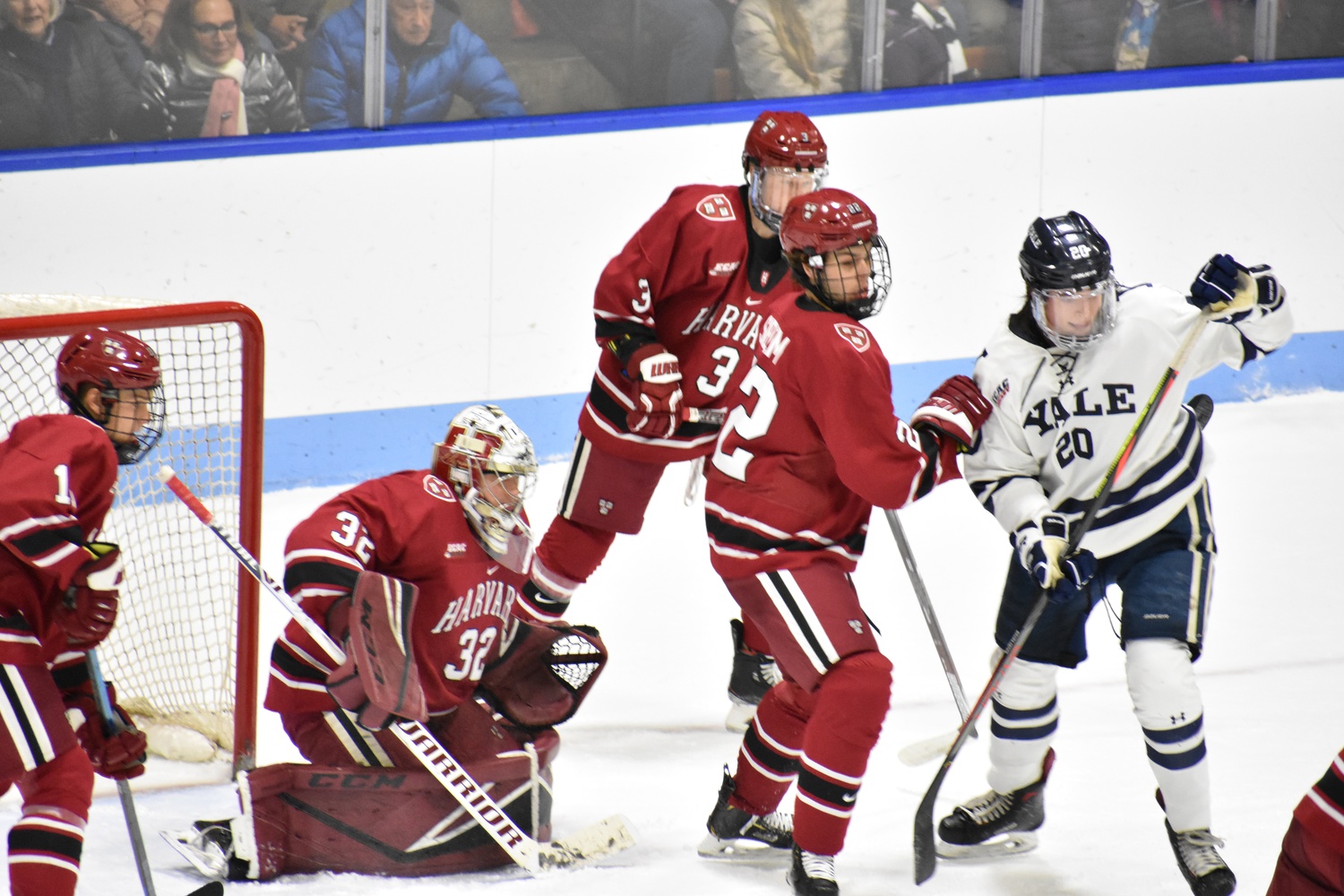 Gornet's .976 save percentage came with another 40+ save performance. His number on the season (.955 SV%) is good for second in the country, behind only his teammate, rookie Mitchell Gibson. By Amanda M. DiMartini

“I thought Cam was excellent tonight,” coach Donato said. “He looked calm, he looked confident. I think you could feel it on the bench, that the guys knew that he was locked in…. It’s a credit to him, after watching for a couple games, to come in and play that well.”

The Crimson opened the third with 1:30 remaining on a power play chance, having been outshot 28 to 15 to that point. The 16th shot was another dagger: unable to set up the man advantage effectively, Harvard carried in on an odd-man rush instead, and junior defenseman Reilly Walsh fired a shot past Kaczperski from the high slot. Just like that, the visitors were up 3-0, with most of the final period still remaining.

But the scoring was far from over. Both Farinacci and captain Nathan Krusko added tallies for the visitors, the latter with a shorthanded strike for his first goal of the season.

On the same penalty, however — a call that had coach Donato fuming on the bench — the Bulldogs finally broke Gornet’s shutout bid. A pretty passing play ended with senior forward Mitchell Smith punching the puck home; Gornet’s cross-crease lunge was to no avail.

Nevertheless, the Crimson rode out the last few minutes of the game, and added a goal courtesy of junior forward Jack Badini, to earn a weekend sweep. The triumph extends the current unbeaten streak to five games, which is the team's longest since its Frozen Four season in 2016-2017 — although there is lots of winning to be done before coach Donato's group even approaches that memorable 16-game stretch. 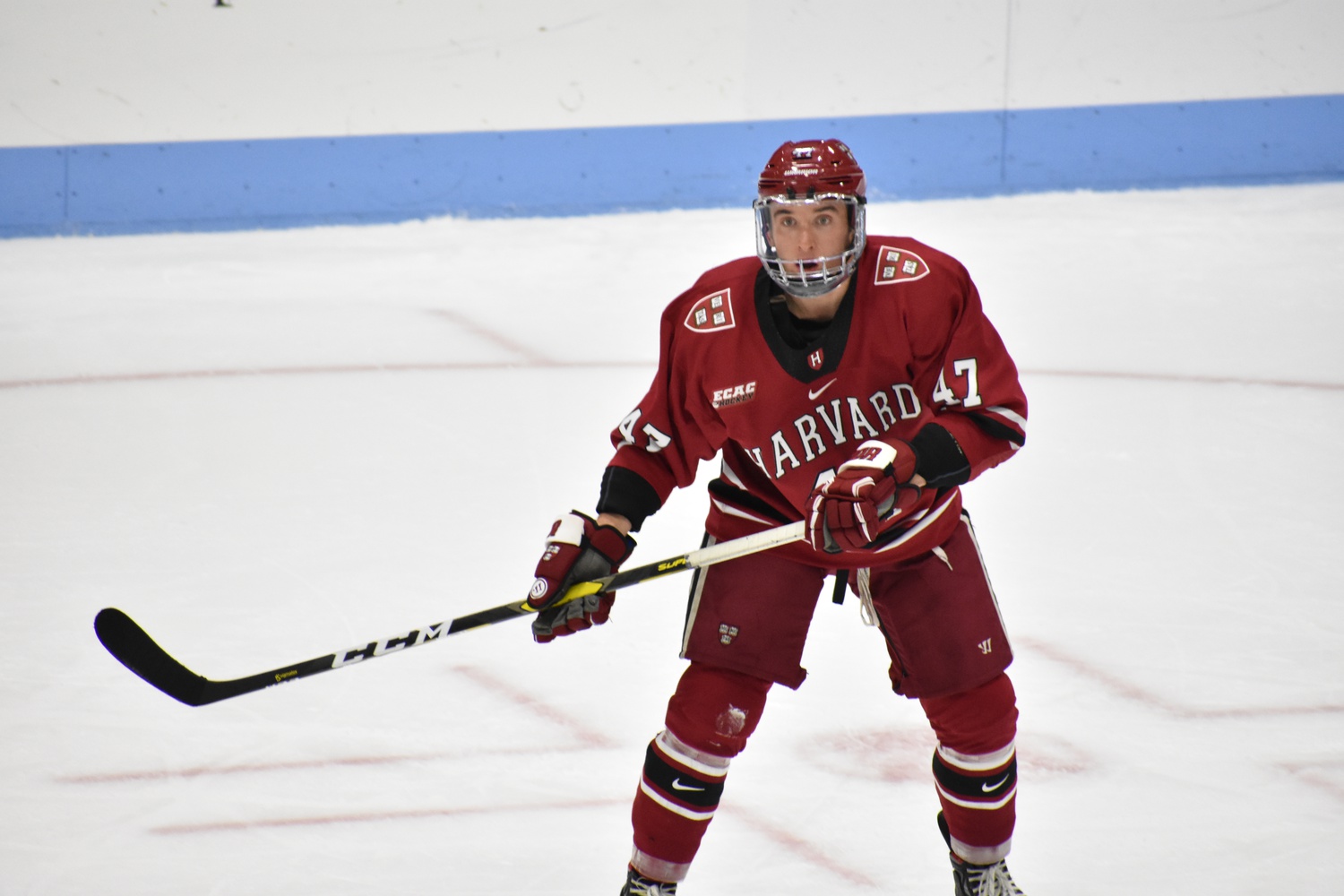 Dornbach's two assists on the night have put the sophomore on a three-game point streak. He has earned a point in four of five games so far this season. By Amanda M. DiMartini

Despite the fact that Harvard outscored opponents 10-2 on this road trip, shot differential remains an area for improvement. By the final buzzer, the Crimson was outshot 42-28, a number that might not entirely be explained away by the team’s game-long lead. As long as Harvard has the kind of performances in net it has been seeing, though, it can afford for its team defense to be a work in progress.