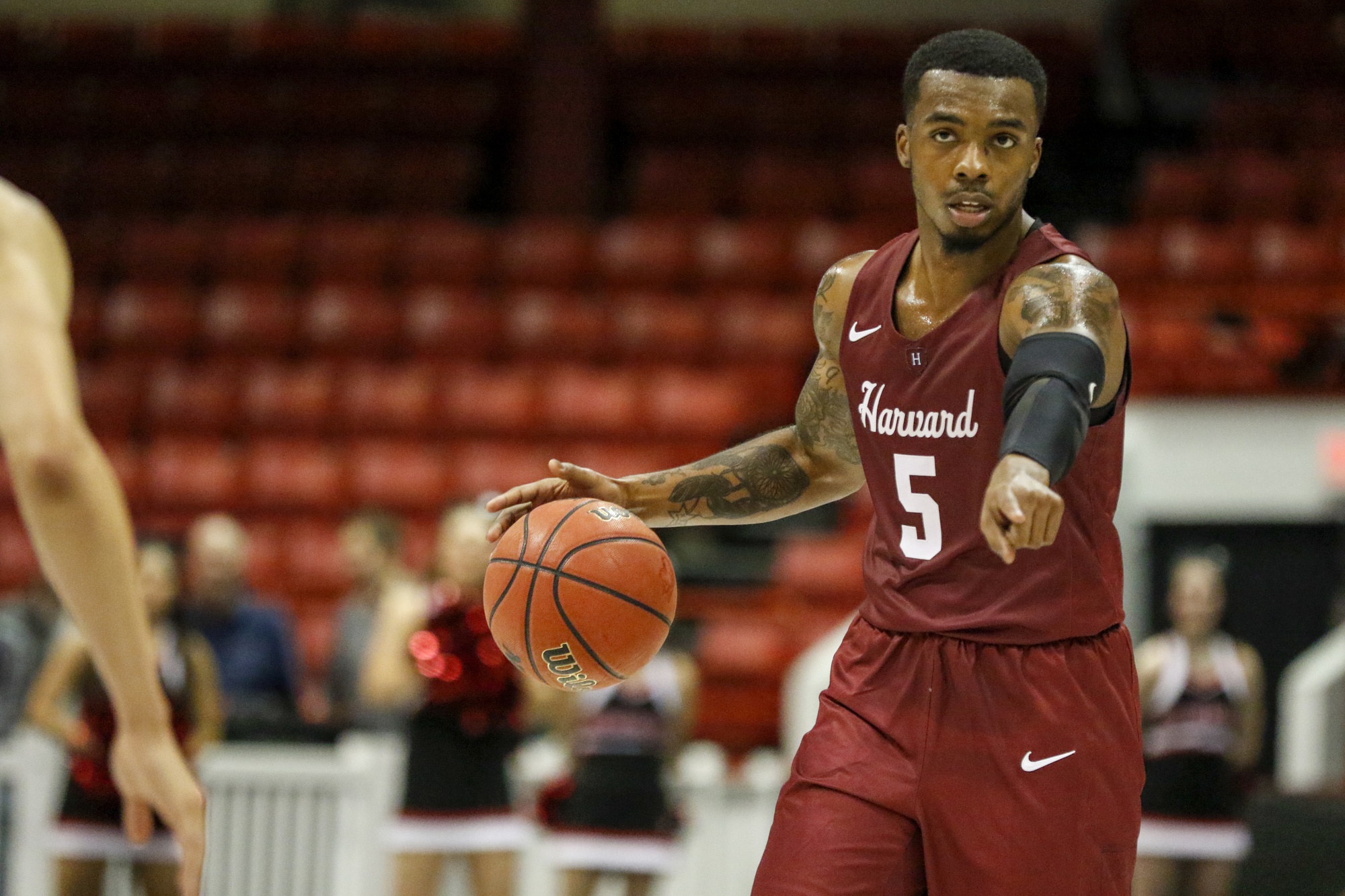 Fans of Harvard men’s basketball might have hoped that a return from No. 11 would spark the Crimson to victory at Scotiabank Arena in Toronto, Ontario.

But despite the first appearance of the season for senior guard Bryce Aiken, Harvard was swept away by a second half barrage from beyond the arc by the Buffalo Bulls. The Crimson (3-2) eventually fell by an 88-76 score after surrendering 48 second-half points.

Despite Harvard dominating most of the first-half, a buzzer-beating three-pointer from nearly half-court by Jayvon Graves gave Buffalo (2-1) a 40-38 lead entering the half, proving to be a harbinger of things to come after the intermission. In the second half, the Bulls drilled triple after triple on kick-out passes and behind screens.

Saturday afternoon’s defeat was particularly disheartening for an Amaker-coached team which hangs its hat on defensive ferocity. Coming out of halftime, Buffalo knocked down 57 percent of its three-pointers in the final 20 minutes, led by an outstanding effort by sophomore guard Ronaldo Segu.

The Orlando, FL., native had an ultra-efficient 6-of-7 afternoon from the floor, converting on all three of his three-point attempts, and hitting all six of his free-throws in the building that Toronto natives still call the “ACC”. Segu finished with 21 points, along with five rebounds and six assists, out-dueling Aiken in his return to the old Air Canada Centre court.

The Randolph, N.J., native’s return to the floor was a welcome sight for Crimson fans and Coach Amaker. Despite playing only 20 minutes, Aiken led the team with 18 points, drilling 2-of-4 three-pointers, but turned the ball over five times in his first taste of live action of the 2019-2020 campaign. Despite any rust that he had to shake off, Aiken was the most explosive player on the court for Harvard.

In the first ever regular season Division I basketball game played in the province of Ontario, Amaker started his three Ontarians, with freshman Luka Sakota, sophomore Noah Kirkwood, and junior Danilo Djuricic all taking the court at tip-off. Kirkwood played 36 minutes in his return to the lineup after missing the game against Siena with an illness. The Ottawa, Ontario native scored 10 points but mis-fired on all three of his triples.

Djuricic, a native of Brampton, also scored 10 points and secured nine rebounds in 20 minutes of action. Djuricic and Kirkwood were amongst five Harvard players to score in double figures, but ultimately the outcome of the game was determined by Buffalo’s three-point shooting and the team from Western New York’s opportunistic points off of turnovers.

The Bulls were able to convert 17 Crimson turnovers into 27 points, outscoring Harvard by 12 points in that department, matching the margin of victory for Buffalo. Turnovers are a problem that have frequently plagued the Crimson early in the past few seasons, an issue that proved to be one of the differences at Scotiabank Arena.

Coach Amaker acknowledged the team has to adjust to who they’ll be now that Aiken is back, given how the dynamic has been different without him in the rotation.

“We all have to give of ourselves a little bit more, including him, of course, to figure out how our team can become better...certainly he’s a dynamic scorer,” Amaker said post-game. “We also have to learn how to play with him and he's going to learn how to play with us because it's his first game...so we’re not in sync, and hopefully we’ll find the rhythm that we need going forward.”

The Crimson are slated to play Texas A&M in the first round of bracket play on November 28. The winner will face the victor of Maryland and Temple in the semifinal the next day. USC, Davidson, Fairfield, and Marquette round out the rest of the eight programs competing.

This next week of practice will be important for the team to regroup and rest after several players went into the game “banged up” according to Amaker.

“I’m hopeful that our leadership will show up at this time to right the ship for our team after tonight,” Amaker said.

The Crimson’s next home game will be on December 7 against Massachusetts after their stint of away matchups.