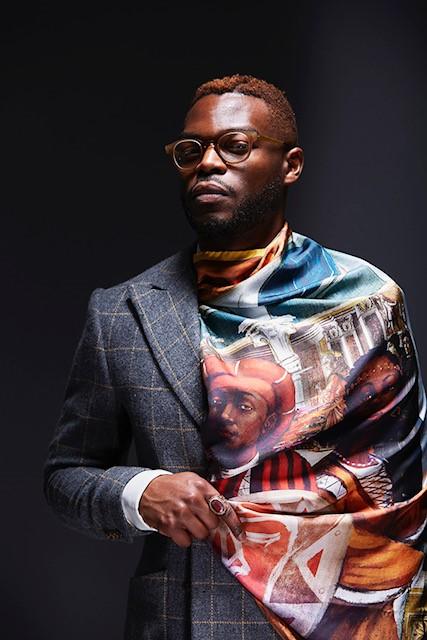 Walé Oyéjidé is a lawyer, fashion designer, and creative director whose fashion work was featured in the movie "Black Panther." By Courtesy of the Harvard ArtLab
By Jaden S. Thompson, Contributing Writer

“Picture a refugee,” Nigerian fashion designer Walé Oyéjidé said, standing at the front of Menschel Hall in Harvard Art Museums on Nov. 12. “Do you see someone who is covered in ash, sitting in the back of an ambulance?”

Oyéjidé prefaced a screening of his short documentary, “After Migration: Calabria,” by urging his audience to challenge their preconceptions of refugees, underscoring the mission of his overarching project “After Migration.” “After Migration” aims to humanize migrants and share aspects of their stories that are often left out. Oyéjidé discussed this project with creative writing Professor Teju Cole at the Harvard Art Museums event called “After Migration: In Defense of Using Beauty to Illustrate the Journey of Those Who Have Suffered.”

A former lawyer, Oyéjidé is now the creative director and founder of the fashion company Ikiré Jones. His designs featured prominently in the 2018 Marvel blockbuster “Black Panther.” The Ikiré Jones website describes its work as “intended to serve as a reminder that the luxury of birth should not dictate one’s capacity for compassion.”

The event began with the showing of “After Migration: Calabria,” which Oyéjidé co-directed. The documentary follows two young African migrants who move to Calabria, Italy to seek better lives and opportunities. One migrant is an 18-year-old boy from Gambia who wants to pursue soccer professionally. “I wish there was a way to make us physically closer or able to see each other more often,” he said to his family back home. The other migrant is a young woman from Nigeria, who brought her toddler with her to Calabria. “When she grows up, I have a lot to tell her,” she says, in reference to both her journey to Europe and her family that remains in Africa. According to Oyéjidé, the documentation of their lives in Calabria is intended to portray migration as multidimensional, focusing on the human element of their journeys.

The migrants in “After Migration: Calabria” were also paid to model Oyéjidé’s designs, which they showcase in the documentary. Against Italian vistas, they wear clothes from his line, which feature depictions of medieval, renaissance, and baroque European art.

“It’s taking the highest apex of beauty and injecting oneself into that,” he said. “We have been historically programmed, and I think rightly so, [to think] that a Michaelangelo or a Caravaggio are gorgeous works made by humankind. If you’re thinking about a population that is seen as less than, what [is the] most effective way to make them be treated otherwise, but to inject them within the most classically accepted form of beauty.”

Cole and Oyéjidé went on to discuss why the topic of migration, as well as the danger and incarceration it encompasses, are not topics of urgency in society the way that climate change is. They agreed that this omission can be explained by the fact that migrants usually don’t look like most Americans, and their experiences may feel far removed and unrelatable to some. Taking into consideration the reality that all Americans who are not indigenous to the land have immigrant ancestors, Cole suggested that the urgency of immigration is deliberately suppressed, and distance from borders encourages this suppression.

“[We have to] be infuriated by and just staunchly refuse any notion that our human responsibilities stop at arbitrarily drawn national borders,” Cole said.

The way that Oyéjidé and Cole encouraged people to consider immigration resonated with their audience. “The biggest thing that’s coming up for me is what we forefront when we talk about migrants and these narratives of migration, and how the different depictions of that not only affect the larger conversations but also how the individuals feel about themselves,'' audience member Molly Copeland said.

“My biggest takeaway is that we all should endeavor to hold space for each other, as much as we can while still staying committed to what’s important to us — meaning carry our pain, honor our pain, but also realize that everyone does not walk with our experience,” Torya Beard said.

At the center of Oyéjidé’s After Migration project is storytelling.

“Storytelling is the lifeblood of migration itself,” Cole said. “That’s how you keep yourself alive through the desert. That’s how you keep yourself going through the water, and that’s how, when you arrive on the shores of people who think you’ve shown up empty handed, you have a sense of the wealth of your stories and how complex they are side by side with anybody’s stories anywhere.”