At the Brink of History

The Crimson’s commander has led teams to victory on the gridiron, but he has also shaped many lives of young men.
By Joseph W. Minatel 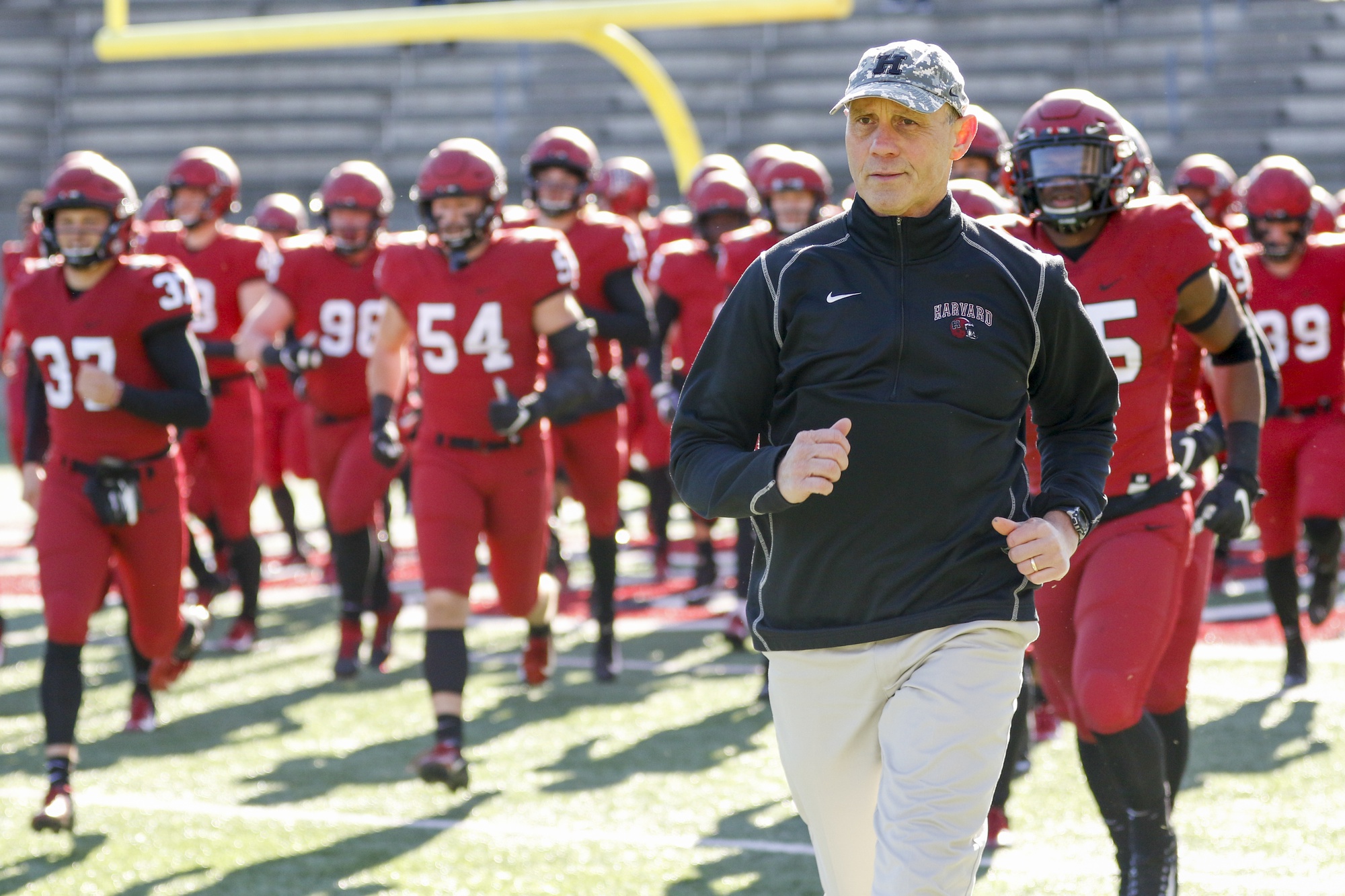 Coach Tim Murphy leads his players onto the field, an exercise he has now performed for the Crimson for 26 years. By Timothy R. O'Meara

“He’s just such a classy individual.”

These were the very first words out of the mouth of Dartmouth coach Buddy Teeevens when describing fellow head coach Tim Murphy following a matchup between the two peers. While an outsider could seemingly trust the opinions of another coach who has also headed an Ivy League team for over 20 seasons, the pair of coaches have actually known each other since the seventh grade, with parallel careers through the Ivy League.

“He’s a close friend, but we’re competitors on gameday,” Teevens added. “We’ll say hello before and goodbye after, and we’ll get together on Thanksgiving and commiserate a little bit.”

This competitiveness is no new development.

“Buddy and I are very close,” Murphy explained. “We’ve known each other since seventh grade, when we met in junior high school. We were both very competitive guys.”

It is this very nature as a competitor that has led Murphy to where he is now: one victory shy of the record for most wins ever by an Ivy League football coach.

While I have interviewed him on many occasions as a reporter, I first met Harvard football coach Tim Murphy in the late spring of 2017. I was 18 years old, just a high school student living in Louisville, Kentucky. I had just recently been accepted to Harvard College, and was warmly invited to an alumni reception at a fancy country club. A surprise guest, Tim Murphy announced to the group that he was on a recruiting trip near his old stomping grounds in Cincinnati, Ohio, and had heard that there was an admitted students event just 90 minutes away. He shared that he could not possibly pass up the opportunity to meet Harvard’s newest members, and greeted new students with intense enthusiasm. Murphy headlined the event with an articulate speech about passion, initiative, and success.

Success is definitely one of the first things to come to mind when Murphy’s name is invoked. In addition to the approaching record, the longtime Harvard coach has captured nine conference titles and his Harvard teams have the best winning percentage in the FCS since the turn of the millenium, among these three undefeated campaigns.

Murphy, however, has never been only a football coach. The Crimson’s commander has led teams to victory on the gridiron, but he has also shaped many lives of young men. Sending nearly two dozen players to national-level academic recognition, Murphy always understood his all-important role not only as a coach, but also as a mentor and supporter to many that have cycled through Harvard.

While it seems that Murphy is Harvard football at its core, he has not been in Cambridge forever. Even so, the path for the next winningest coach in Ivy League history started in the Ancient Eight forty years ago. Following four years as a linebacker at Springfield College, Murphy’s first coaching job came as a part-time assistant at Brown.

“My first job out of college was as a 22-year old graduate assistant at Brown,” Murphy said. “I was in the Ivy League and I was really impressed by the kids, and how they could truly be real Division I athletes. They were high-character kids and high-character academic kids.”

Eventually, Murphy would team up with his childhood friend Teevens once again, serving as the offensive coordinator for Maine. At this point in time, however, his coaching future was far from guaranteed.

When opportunity came knocking, however, Murphy answered the door.

“Out of the blue, the head coach left and they offered me the job, and I was like, ‘wow, this is exactly what I always wanted, I just did not know if I would have the opportunity,’” he said. “We were very fortunate our first year.”

Murphy would succeed his friend Teevens in the head coaching position. The ever-driven Murphy was only 30 years old, the youngest head coach in the country at the time. New on the scene, the young gun helmed the Black Bears to a conference title and their first-ever Division I-AA tournament berth in school history, leading to his next job with the University of Cincinnati.

Not much had changed before his next job. As of 1989, Murphy was still the youngest head coach in the nation at 32 years old, and the team he inherited faced even more adversity than Maine.

“That was a really challenging job,” Murphy explained. “I inherited a job that was going to be on three years of probation.”

With a condemned stadium, 19 lost scholarships due to previous coaches’ infractions, and no practice facilities whatsoever, Tim Murphy took the reins of a doomed program in the Cincinnati Bearcats.

No stranger to adversity, Murphy faced an uphill climb in reversing his team’s fortune. In his final season with Cincinnati, Murphy finally turned around the Bearcats with an 8-3 record, its first winning mark in 11 years.

After conquering yet another mountain of intense odds, Murphy turned his sights toward Harvard.

“I told my wife, ‘I really think I want this Harvard job,’” Murphy said. “I was the first and only one in my family to go to college. I thought it would be great for our children to grow up in an environment that really made people understand that education is important and that education is powerful.”

“Like anything else in life, you go with your gut,” Murphy said. “And it’s the best decision I’ve ever made.”

Now, 26 seasons and 178 wins later, the Crimson’s leader finds himself at the brink of history, yet it is the last thing on his mind.

At my admitted students event nearly 1,000 miles from Harvard Stadium, Tim Murphy made sure to walk around to every table and shake hands with students all over the banquet room. It became clear very quickly to everyone in the room that Murphy serves as much more to the Harvard community than the coach of the football team. While he sits at the edge of reaching an impressive record, anyone who has met the coach knows that Tim Murphy has meant much more than a set of statistics to Harvard over the past 26 years, and he will continue to do so well after any records are broken.