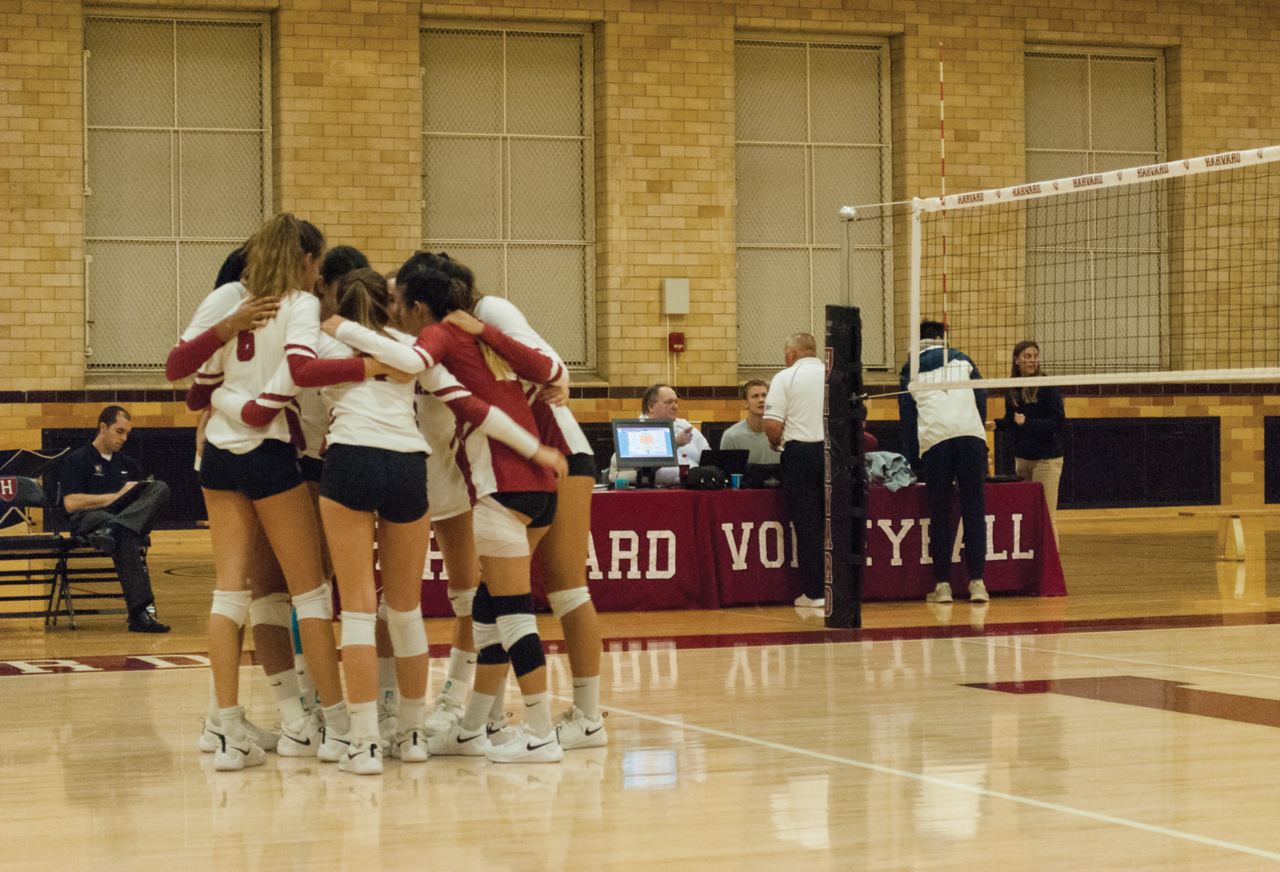 The Crimson dropped its last two games of the season, but has shown glimpses of great play against Cornell and Columbia By Amy Shi
By David Aley, Contributing Writer

Going into its last weekend of the season, Harvard had some big things to keep in mind: finish the final stretch of the season on a high note and help send off the seniors in the best way possible. And while the Crimson (5-18, 3-11 Ivy) failed to secure victories against fellow Ivy League opponents Cornell (17-5, 10-3 Ivy) on Friday and Columbia (12-12, 3-9 Ivy) on Saturday, the team fought hard until the end in each game, leaving a silver lining for the season to come.

Harvard came into its Senior Day showdown against Columbia with a chip on its shoulder after falling to Columbia 3-0 on Oct. 11.

“There were a few key players on Columbia that we knew that we needed to slow down. We did a great job of practicing that throughout the week and executing at game time,” said Fields. “Going into the game, we were just focused on ending the season on a high note, fighting hard, and enjoying every minute of it.”

The Crimson dropped a hard-fought first set 27-25. However, the team came back strong in the second and third sets, taking them over the Lions 26-24 and 25-16, respectively. Mabry and senior Grace Roberts Burbank, who ended the night with 15 kills and a 0.389 hitting percentage, led the way on offense, while senior Sope Adeleye’s six blocks helped the stout Crimson defense.

“We have a saying, ‘E.T.T’ which means ‘Empty the Tank’. We say it during a long practice or a tough game. Emptying the tank means leaving everything that you have on the court for your teammates. It means pushing yourself harder than you think you can,” said Fields. “We just reminded each other that that game was the last chance we had this season to empty the tank. I was so proud of the whole team because we did just that.”

Despite the hole they dug themselves into, Columbia fought back hard against Harvard in the fourth set, taking it by a score of 25-20. It was a back-and-forth set for both teams, but Columbia eventually shut the door with seven straight points. In the final set of the season, Columbia again secured the set with a score of 16-14 to close out the match.

But even with a defeat in the final game of their careers, the Crimson seniors could sense a bright future ahead for the team.

“It felt very special for all four of us seniors. Given that it was our last Harvard volleyball game, I think all of our emotions were very high. But we just wanted to leave it all out on the court,” said Fields. “Even though it didn’t go our way in the end, I was so proud of how the whole team fought. It is still surreal to me that I’ve played my last game as part of the Crimson. I’m just grateful for all the memories and relationships that I’ve made. I’ve been so lucky to grow as a player and an individual in a program with great coaches and teammates, and I’m excited to watch the younger players continue to grow, too.”

Harvard started out with a bang, trading blows with Cornell in the first set until the score was tied at 13. At this point, the Crimson began to turn it up, rattling out a 4-1 scoring run on its way to forcing a Cornell timeout.

Senior Maclaine Fields cited the team’s preparation as a key to their successes in the game.

“We always have a specific game plan… our coaches spent a lot of time scouting [Cornell], and then we went over the key takeaways and watched film as a team,” said Fields. “We always have to be ready to adjust, because we never know exactly what the other team is going to show us.”

After Harvard’s initial hot streak in the first set, however, the Big Red began to take over. Answering with a scoring run of its own, Cornell fought its way to the first set, 25-23. In the second and third sets, Cornell continued to surmount a lead over the Crimson, taking the second by a score of 25-19 and securing the third and final set, 25-15.

Led by Fields’ four total blocks and junior Mindie Mabry’s eight kills on the night, the team still found some areas to improve in despite the loss.

“We always expect Ivy League matches to be close ones,” said Fields. “We know that we are going to have to fight for every point. We just embraced that and trusted our training. The tight games are always the most fun, anyway.”