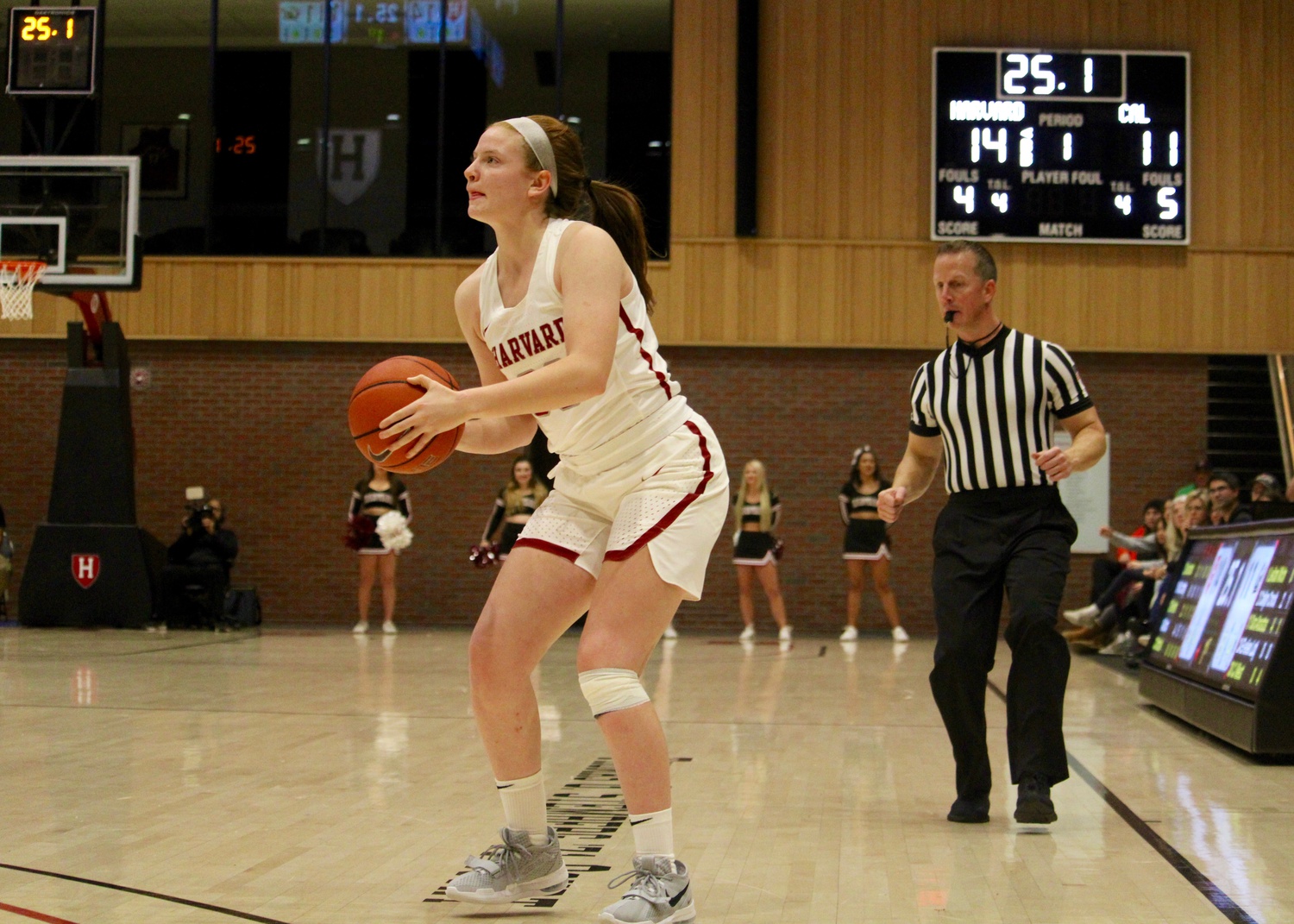 A breakout performance from first-year guard Annie Stritzel propelled the Crimson to a 53-44 victory over winless Hartford on Friday night as Harvard preserved its undefeated home record.

The Chicago, Ill. native had previously totaled 15 points in her first five games donning the Crimson uniform. She more than doubled that mark tonight, finishing the contest with 17 points on 5-of-8 shooting.

“A goal of mine is to always bring energy no matter what,” Stritzel said. “It’s just kind of fit and flow of the offense today, I was being aggressive and the shots fell so that was nice.”

Seven of the first-year’s points came in a rejuvenating second quarter in which the Crimson (4-2) held the Hawks (0-5) to just two baskets while building up a 15-point lead. Stritzel provided an instant lift for the team off the bench. After drawing a shooting foul and scoring her first two points from the charity stripe, the guard ensuingly broke Harvard’s curse of eight missed attempts from deep with her first triple.

Showing her tenacity on the defensive end, Stritzel also notched a steal and reciprocated with another lay-up, extending the Harvard lead to six at the halfway point of the second frame.

“She’s very selfless, and just finds a way to get things done and she will only get better now that we figured out she has a comfort zone regarding her knee,” said coach Kathy Delaney-Smith, who added that Stritzel had just received positive news on her still ongoing recovery of a knee injury.

“It’s been a little crazy, but a good crazy,” added Stritzel on her transition process. “Working out a lot, it’s much different, much stronger, much faster. But as soon as you get settled, the game starts coming to you more.”

Senior Jeannie Boehm was another bright spot in the Crimson offense, cementing her second double-double of the season with a 12-and-12 night. Holding Hartford interior anchor Lawrencia Moten to just six points, Boehm also added four rejections in the low-scoring affair.

“I’ve had a lot of long talks with Kathy [Delaney-Smith] and Mike [Roux] on really focusing on the defensive end and other areas of my game,” Boehm said. “Tonight was just like that on the floor, just really trying to impact the game in any way that I can.”

Harvard held as large as a 22-point lead heading into the final six minutes of play, but saw that margin dwindle to single-digits by the horn. Two Stritzel free throws were the only offensive points in that extended drought as the Hawks’ centerpiece scorer, Jada Lucas, broke through to finish the game with 18 points. Delaney-Smith, outside of Stritzel and Boehm’s performance, acknowledged much work still needs to be done in the maturation of this young and untested team.

“It’s hard for young teams to distinguish between playing too fast as opposed to running fast,” Delaney-Smith said. “So we ran fast and then we weren’t able to slow ourselves down in a new system. And it’s just I’m prepared for it to be ugly for a while, so my main criticism was in the defensive end. I thought we were a very poor marginal defensive team tonight.”

Outside of Lucas, the Hawks saw contributions offensively from sophomores Jordan McLemore Charlette Leurs, who finished with nine and seven points, respectively. Coach Morgan Valley’s side attempted only 13 shots from deep — about a third of the Crimson’s total — but similarly converted at a low 23.1 percent.

Both teams struggled from the field, with near identical results — Hartford finished the night 19-of-61 (31 percent), while Harvard did slightly worse of 19-of-63 (30 percent). Leading team scorer Lola Mullaney had a quiet night with just six points and junior co-captain Rachel Levy, who had a career-high 20 points last weekend against La Salle, shot 1-of-6. Levy did however snatch three of Harvard’s ten steals, matching a career-high.

From the three-point arc, the Crimson launched 35 attempts — a season-high — but converted on just five, three of which came in the second quarter divided amongst Stritzel, Mullaney, and co-captain Mackenzie Barta.

The team began to make some adjustments following a 10-point first quarter, focusing more attention on attacking the paint with greater ferocity. 14 of the Crimson’s first-half points came in the paint, led by Stritzel and sophomore guard Maggie McCarthy’s aggressiveness. Still however, it was on the defensive end and overall decision-making where Coach Delaney-Smith felt more improvement was needed.

“The whole first quarter we didn’t play very good defense stopping the drive,” Delaney-Smith said. “I didn’t feel we were communicating very well, I didn’t think we were using our heads. I thought we were getting up in the grill when this is a team that just wants to drive.”

As the Crimson continues to mesh and improve its form heading into December, both Stritzel and Boehm noted the progress that the team has made in strengthening chemistry and building the foundations for success in Ivy League play.

“The beauty of our team this year is that everyone is so unselfish on the floor,” Boehm said. “I think we had a different high scorer, every single game. And no one really cares about that. There’s no focus on individual stats. We are still refining a couple things in our offense and in our game but I’m feeling really hopeful given the team mentality.”

“The relationships off the court, I think that’s where it starts,” Stritzel added. “It’s not going to transfer to the court unless you really work at it outside the court.”

Harvard will have a quick transition in a schedule that cuts right through the Thanksgiving Break, as the BU Terriers will host the Crimson on Nov. 26 followed by a contest four days later against Quinnipiac.