‘The Two Popes’: An Endearing Introspection 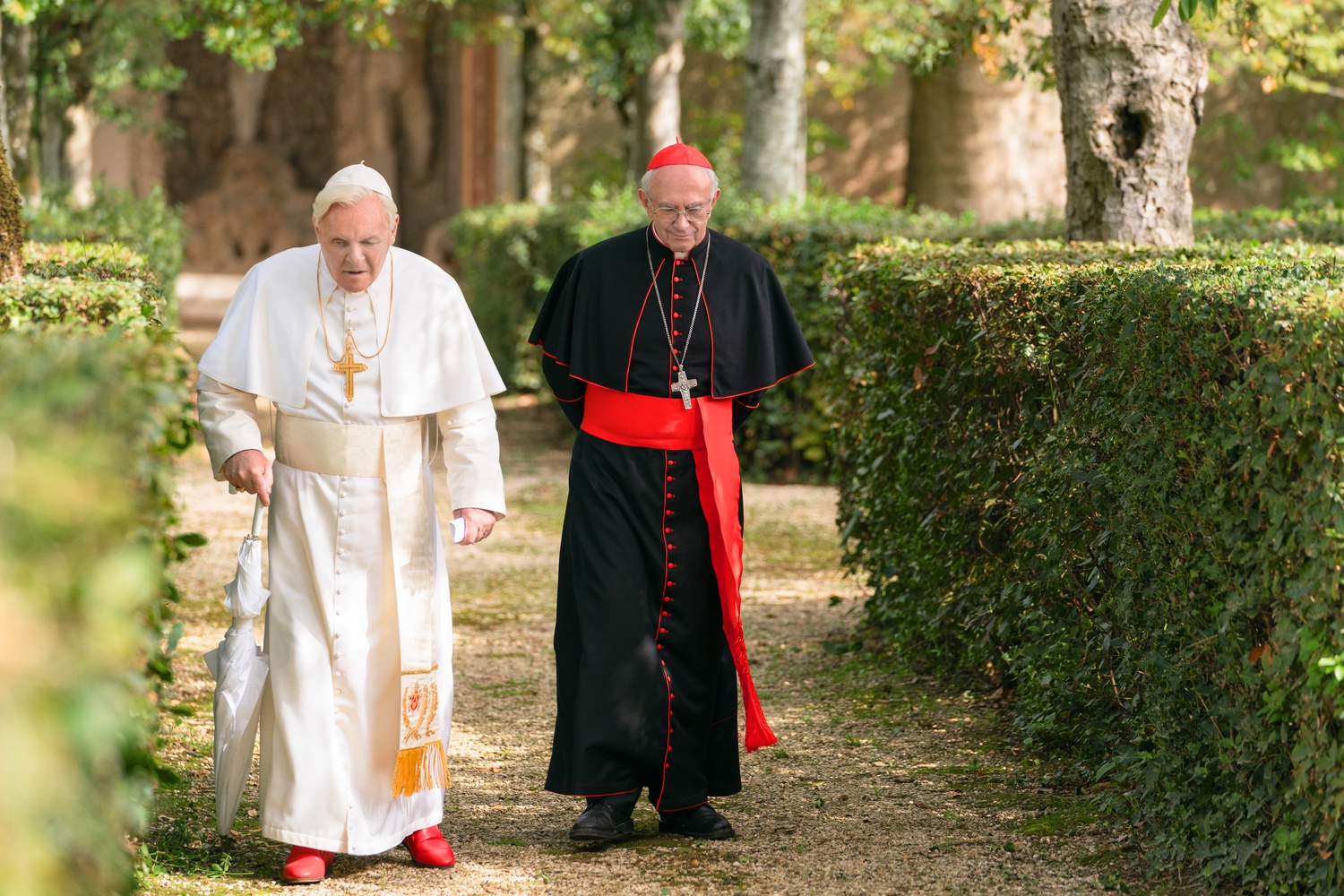 Charming, introspective, and as ambitious as its two spiritual leaders, Fernando Meirelles’ “The Two Popes” takes a look behind the charismatic papacy of Pope Francis (born Jorge Mario Bergoglio) and his humble rise from Argentine priest to sovereign of the Holy See. Meirelles buoys his enlightened film with witty dialogue and magnetic performances from Jonathan Pryce and Anthony Hopkins in their titular roles, even though the impact of such thoughtful conversations are sometimes undermined by overbearing editing.

The film follows the historic transition between the two popes — from the erudite Ratzinger (Pope Benedict XVI), who embodies the stiff conservatism that enveloped the Catholic faith in the wake of Pope John Paul II, to the energetic Bergoglio, who recognized the exigency for religious reform. “The Two Popes” soars when it focuses on this central relationship: At times, it’s largely strenuous (as one would expect from two men with such diametrically opposed ideals), but their exchanges gradually change from blatant disagreements to thoughtful meditations on forgiveness, guilt, sin, and friendship.

Jonathan Pryce disappears into the role as Pope Francis, slipping between foreign tongues from Spanish to Latin with apparent ease. Hopkins doesn’t fare as well in that regard; the legendary thespian sounds predictably English, which is unnervingly obvious considering Ratzinger's thick German accent. However, both Pryce and Hopkins play their respective roles with an uncanny physicality; Pryce with an earnest charisma and Hopkins teetering with old age (despite having a drastically different body build from the diminutive Ratzinger).

Meirelles cleverly allows audiences to understand the context of the acutely religious drama. All viewers, regardless of religious leaning, will be able to understand the film’s central conflicts: the old versus the new; immovable tradition versus inevitable change; the silence of prayer versus the potency of faith. These conflicts are shown, not told. We see Ratzinger enjoying his grandiose summer home on the Italian countryside as Bergoglio rejects the bishop’s palace in Argentina. Ratzinger is committed to following papal traditions, down to wearing the red papal shoes, while Bergoglio rejects these norms. And Ratzinger locks himself in his study to contemplate theology while Bergoglio spends time with the people in his parish.

One way Meirelles signifies the inevitability of change, one of the major themes of his film, is the dissonance between the steeped tradition of religion and the threat of modern technology. Riding in a helicopter makes it difficult for the two popes to converse. Ratzinger has a medical device that inconveniently beeps and interrupts his conversation with Bergoglio. There’s a clear disconnect between the intricate oil paintings in the Vatican, which drip with romanticized melodrama, with the blocky, depersonalized television that inhabits the same room. However, these technological advances mean that the popes can travel with urgency. It means that Ratzinger can care for his health. And it means that Bergoglio can watch his dear football games. Meirelles' takeaway seems to be that change is welcome, even if it can be uncomfortable.

Much of “The Two Popes” is also impeccably shot by cinematographer César Charlone. Whenever Meirelles presents a wide shot, it’s a breathtaking gift: From the pristine paintings of the Sistine Chapel to the imposing marble columns of St. Peter’s Basilica, the immersive tracking shots imbue the interiors with a dizzying grandeur. The production design of “The Two Popes” in these scenes is undeniably incredible — enough to convince audiences that the film was shot on location ("The Two Popes" was filmed at Cinecittà Studios in Rome and received no assistance from the Catholic Church).

Unfortunately, “The Two Popes” is not without its missteps. Just as he did in his earlier directorial efforts “City of God” and “The Constant Gardener,” Meirelles incorporates elements of crime and thriller in “The Two Popes.” There’s a backstory of corruption, oppression, and political turmoil in Bergoglio’s home-country, and while that adds an unexpected layer of thriller elements to the film, “The Two Popes” would have done better without its extended detour into Argentinian politics: It's a jarring interruption of the film's otherwise careful introspection. In these flashback sequences, the cinematography also takes a turn towards dull shades of sepia and grey, complete with bland lighting and uninspired production design. It's clear that Meirelles aimed to visualize the contrast between the uncertainty of Bergoglio's past and his shining future, but these flashback scenes look unforgivably amateurish for a film of this magnitude; it feels like a made-for-TV docudrama doomed with a pitiful budget.

The best film editing should be inconspicuous; it dissolves behind the screen but guides mood and story. That is the antithesis of some sequences in “The Two Popes.” The editing is invasive, and particularly evident when Meirelles uses a handheld camera when he tries to create a more intimate atmosphere between Bergogli and Ratzinger. The uncomfortable zooms and off-centered camera angles interrupt the crackling chemistry between Hopkins and Pryce, ultimately keeping audiences from fully realizing the profound spiritual experience that "The Two Popes" offers.

“The Two Popes” is a stunning thematic achievement in building bridges; it’s unabashedly politically charged (and unmistakably pro-Francis), but Meirelles’ film does what it sets out to do well. Even though it has a clear agenda, there is an abundance of thoughtful, constructive conversations in "The Two Popes" that more than overcome the inconsistencies in the plot and the over-editing.
—Staff writer Lanz Aaron G. Tan can be reached at lanzaaron.tan@thecrimson.com and on Twitter @LanzAaronGTan1.