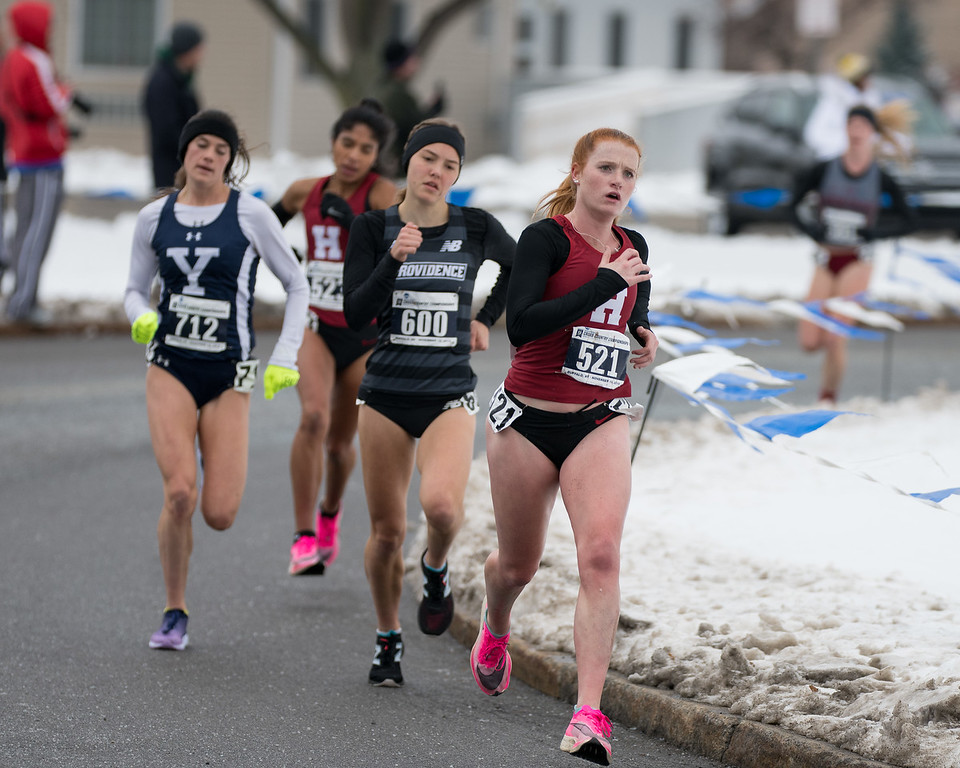 The abysmal conditions in Terre Haute, Indiana, did not stop the Crimson runners from competing in the NCAA National Championships. By Courtesy of Svenne Juul
By William Connaughton, Crimson Staff Writer

Down in a cold and rainy Terre Haute, Indiana, the Harvard Men’s No. 23 Women’s No. 25 Cross Country teams wrapped up their outstanding seasons in the NCAA nationals race. The men’s team pulled out their best performance since 1968 finishing in 15th place while the women’s team finished in 31st concluding a historic year for the cross country program as a whole.

For the men, the day was highlighted by a number of fantastic individual performances. Most notably, senior Kieran Tuntivate crossed the line in 28th place with a time of 31:12.7. This run was good enough for Tuntivate to be selected as an USTFCCCA All-America and marked the best Crimson finish since Maksim Korolev '14 captured third place as a senior. In addition, the Delaware product just the 7th runner in Harvard history to be named an All-American. This performance for Tuntivate is strong bookend of a fantastic career in cross country as the senior will have the spring to run his final races in the crimson uniform.

Behind Tuntivate was standout first-year Colin Baker who placed 48th and steady junior Matthew Pereira who placed in 75th. Baker was the second-highest finishing true freshman in the biggest cross country race in the nation. As talented seniors like Tuntivate and Will Battershill graduate, younger members like Baker will have to step up and continue to perform. If this race is any indication, the Crimson are still set with Pereira and Baker returning next year.

“We wanted to be the drivers of Harvard’s transformation into a national powerhouse,” said senior captain Charlie Davis on the future of the team. “This season is just the beginning, and future teams will have it on their shoulders to make sure Harvard cross country smashes the bar we set this season.”

Just outside the top 100 were Battershill who placed in 108th and junior Milner who placed in 196th. Jumping a couple of spots for the final few scorers for Havard could have meant knocking on the door for top ten in team scoring. Nonetheless, the Crimson squad raced well and, in a year of so many records, placed the highest they have ever placed as a team in over half a century.

“At the beginning of the season 3 months ago, we sat down as a men’s team and talked about where we wanted to take Harvard cross country this year. All the guys really came together around making the commitment to establish ourselves not only at the top of the Ivy League, but to really put ourselves on the map at the national level,” commented Davis on the team’s season. “On Saturday we did that. Watching our guys come through the finish chute executing a race that was a culmination of years of hard work for this group was incredible.”

The Harvard women wrapped up their underdog season with a respectable 31st place finish in a strong field of runners. Leading the Crimson, as she has for much of the season, was junior Anna Juul who broke into the top 100 finishing in 94th with a time 21:13.2. In addition to her strong performance on course, Juul was also selected for the prestigious Elite 90 award. This award acknowledges athletes who show incredible dedication both on and off the field by going to the competitor at the NCAA championships for a given sport with the highest GPA. In addition to Juul’s strong running season, the religious studies major has a perfect 4.00 in the classroom. Juul is just the third Harvard athlete ever to receive the award, as she embodies what it means to be a true student athlete.

Behind Juul was standout first-year Iz Sagar in 185th, junior Brooke Starn in 204th, senior co-captain Gillian Meeks in 229th, and to wrap up the scoring for the Crimson junior Judy Pendergast in 251st. Needless to say, the Harvard women didn’t have the performance they wanted. However, simply getting to the NCAA nationals is an incredible accomplishment for a team who placed 6th in the Ivy League last year.

“To be honest, it wasn’t looking great from a team scoring perspective in the beginning of October. However, we not only had our injured team members work hard to get back quickly and smoothly from injury, but also everyone, including people who were racing and those who weren’t, really banded together as a team once Heps came around,” Meeks said. “We put away the doubts we had about whether or not everyone was fully ready to race, and just raced for each other. Incredibly, that mindset rubbed off on everyone and we ended up having our best finish at Regionals since I’ve been here and the best place for Harvard at Regionals in many years.”

Across the program the runners have had overwhelming success at least in part due to a talented and hardworking coaching staff. As a result, Associate Head Coach Alex Gibby was given the award for the coach of the year for both the men’s and women’s teams in the Northeast Region.

For many talented seniors, this race was their last as a Crimson cross country runner.

“There is something really special about achieving a goal that is the culmination of thousands of miles run, committing to recovery day in and day out, and racing with grit, not just for yourself but for the guys on the line with you and for the H on your chest,” said Davis when reflecting on his time with the team. “It has been an incredible past few years on this team. It has taken so much hard work and dedication on the part of all of our guys to get to this level, and I’m so happy that it’s paying off.”

Many seniors have not fully internalized what it means that this was their last race in the crimson uniform. Meeks had strong words about her experience on the cross country team.

“My time on the Harvard cross country team has been one of the most challenging yet most rewarding experiences of my life. I feel so lucky to have been able to compete in every cross country race with the team since arriving on campus, and to witness the immense growth of the team culture from my freshman year until now,” Meeks commented. “I’m incredibly grateful to have ended my time on Harvard’s XC team on such a high note, but most importantly I’m so thankful for the everyday experiences on the team and the lifelong friendships I’ve built. I’m excited to watch the team crush it next year from afar as I think Harvard XC is just going to keep getting stronger. It still hasn’t hit me that I won’t be here next year wearing the Crimson H, racing through the mud with my teammates.”

Tuntivate echoed similar sentiments when asked about his reflection of his time with the team.

This being my last season hasn’t really registered,” Tuntivate said. “We’ve always had a ‘let’s be better next year’ mindset and it’s kind of hard not to have that even though I’m not going to be on the team next year. I’m really excited for the future of Harvard XC, we have really good runners and an awesome coach and I look forward to seeing what they do in the future.”

Harvard Cross Country will return in official capacity next fall but most runners will be competing in the spring in track. Tune in to the track season to watch these talented runners continue to compete and impress on the biggest stages.