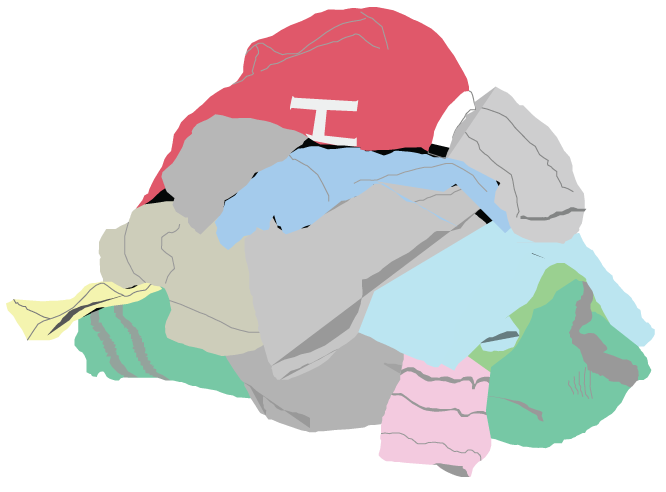 "The sun set on the other side of the river and the air got chilly. My friend Olivia ran back to her room in Lowell to get us blankets and sweaters and sweatshirts."
Advertisement
Advertisement

Why We Don't Wear Harvard Gear

No one wanted to wear it. We threw it around the circle like we were playing a game of hot potato, chucking it from one person to the next, shrieking “You wear it!” “No, you wear it!” Everyone wanted to wear Olivia’s other sweatshirts, which were faded and looked vintage, or her fisherman sweaters. To wear the Harvard sweatshirt would mean being the odd one out.
By Paul G. Sullivan

Before classes started, when the days were warmer and slower and campus felt more like camp than college, my friends and I had a picnic on the Charles River. We sat by the Weeks Bridge and ate loaves of bread, spreadable cheeses, and strawberries. One person brought a speaker and another brought an inflatable, solar-powered lantern so we could stay out past sunset. It felt like a dream of college: red bricks, cheap sugary wine, somewhat intellectual conversation, and nearby bells ringing out the hour.

The sun set on the other side of the river and the air got chilly. My friend Olivia ran back to her room in Lowell to get us blankets and sweaters and sweatshirts. She came back a few minutes later, carrying a confusion of cotton items. She dumped the pile in the middle of our circle, and we all fished for the sweater or sweatshirt we wanted. One of the items in the center of the pile was a Harvard sweatshirt.

No one wanted to wear it. We threw it around the circle like we were playing a game of hot potato, chucking it from one person to the next, shrieking “You wear it!” “No, you wear it!” Everyone wanted to wear Olivia’s other sweatshirts, which were faded and looked vintage, or her fisherman sweaters. To wear the Harvard sweatshirt would mean being the odd one out. Someone — the rotten egg, I suppose — finally ended up with the sweatshirt. She put it on with a look of defeat and distaste.

Most of my friends and I came to college from metropolitan areas and take pains to present as such: chunky dress shoes, high-waisted pants with big pleats, wool sweaters, whimsical blouses, well-worn tote bags. A Harvard sweatshirt isn’t part of that look. My ex-not-quite-boyfriend criticized me about a number of things and one of them is my college friend group. He points out that my friends are also from cities in the Northeast and this, he says, means I’m only attracted to people who came to Harvard with my level of cultural capital.

He isn’t totally wrong. For me and most of my friends, Harvard was never a far-off reality, but rather, adjacent to our lives growing up. For me, it was literally adjacent: I lived two minutes away from Pfoho. For a lot of my friends, Harvard was adjacent via prep school or well-funded public high school and legacy status. Like some of my other friends, I’m here at Harvard on heaps of financial aid. Still, I grew up with an intimate familiarity of this place and the attitudes and the information that can get you far inside of it — the cultural capital my ex was talking about. Cultural capital affords you many things, and one of them is the ability to treat going to Harvard as no big deal, as another box you checked off the list. You can be blasé about it. You can dismiss it with an air of coolness. You can toss it aside or toss it around a circle like a playground ball.

I played the game of tossing around the Harvard sweatshirt. It was silly, but there was something more happening. I played this game because there is, as I’ve noticed in the social spaces I belong to, a certain conception of students who wear Harvard gear. It’s the image of the starry-eyed student who walks into Annenberg and spins around like a small-town girl with big city dreams, who is simply excited to be here. To express such enthusiasm, my friends and I tell ourselves, would be gauche. All of my friends were acting the same way, so I can only assume that this particular flavor of snobbery is endemic. I was with my cool friends; we were having a cool picnic, listening to cool music, talking about the cool things we did over the summer. I wanted to wear a cool French workwear jacket. I did not want to wear a Harvard sweatshirt.

The actual things that people consider cool change with time and place (Birkenstocks may be cool at the Harvard Outing Club, but not at The Fox; vaping might seem cool to you, but not to your mom), but the governing logic behind why we think about things as cool is pretty constant. In their 2004 book “The Rebel Sell,” philosophy scholars Joseph Heath and Andrew Potter argue that cool exists only in comparison with things considered less cool. Coolness is created out of a need not for conformity but for status and distinction. Coolness is about detachment from the norm, about distancing yourself from the masses.

In an article for the magazine Philosophy Now, Thorsten Botz-Bornstein proposes that coolness is about moderation. “The cool person stays close to real life without getting absorbed by it,” he says. Following the masses is as uncool as being overly eccentric. Wearing a Harvard sweatshirt would be uncool, an embarrassingly earnest embrace of the norm. It would be conformity to the point of complete absorption. Throwing a Harvard sweatshirt in a bonfire and cursing the Powers That Be would be, well, crazy. But showing that you don’t want to wear a Harvard sweatshirt even while part of the institution , and displaying a healthy amount of aversion — that is cool.

After the picnic, I walked back to my dorm alone. I reflected on the evening and shivered with embarrassment when I thought about us chucking around the Harvard sweatshirt with haughtiness and abandon. I hoped no one had seen us: loud and obnoxious Harvard students, blaring music, throwing a Harvard sweatshirt on the ground, turning up our noses at it.

Coolness is always supported by a level of success and affiliation — reminding me of the way comps function on this campus. When someone gets cut from a comp and then gripes about the organization that cut them, we regard them as insecure or spiteful. When someone makes a comp and then proceeds to act aloof about the organization, to not care that they’re part of it, we regard them as cool. If you haven’t made the comp, if you haven’t surpassed the threshold, there’s not much that you can do besides look up at that threshold and feel small. Once you’ve surpassed the threshold, you have freedom: You can embrace it and parade it around with insignias and Instagram posts, or you can look down on it and cast it aside. The latter option puts you above the other members already deemed special, because you’re unfazed by something that they’re so earnest about. Detachment supplies distinction, as it did with me, my friends, and the Harvard sweatshirt. We felt cool and smug in our dismissal of what some people don’t have and what some people are excited to have.

My friends don’t fully agree with me. They think the reason for not wanting to wear a Harvard sweatshirt is much simpler: Why advertise your cultural capital? They recall this guy we once saw at a coffeeshop in the Square. He looked like Armie Hammer, tall and broad-shouldered with hair full of pomade. He was sitting at a table in the back, wearing loafers and a Princeton sweater. My friends and I all agreed he was obnoxious, the kind of person who really wants — no, needs — you to know that they spent four years walking down cobblestone pathways into ivy-covered buildings. We thought he truly believed in the exceptionalism and specialness that the sweater connoted. He believed that what the sweater was communicating somehow elevated him above others. Why would we want to be like that guy?

I’m not saying that we should frolic around campus in Harvard gear and clutch our Harvard brethren with glee. I’m certainly not saying that the institution of Harvard is without fault — there are good reasons to turn up our noses at Harvard as an institution, renounce it or cast it in the mud, though there are certainly more meaningful ways of doing that than simply a cavalier refusal of a Harvard sweatshirt. Many of my friends are doing some of that meaningful work, actively trying to fix this place. I’m also not saying we should count our lucky stars that we go here. I’m just saying that, on that night during the picnic, having the option to wear the Harvard sweatshirt or throw it in the muddy grass was a pretty rarefied position to be in precisely because there was choice involved. In order to distance yourself from something, you must have been adjacent to it in the first place.

I own a Harvard sweatshirt but I rarely wear it. It’s still stiff, barely worn-in, and a little too big. But throughout the winter of my senior year of high school, I wore it constantly. I danced around my bathroom in my underwear and Harvard hoodie, feeling giddy and collegiate and sexy. Now, it just sits at the bottom of my dresser. I’ve tried on the sweatshirt a few times this year, thinking about wearing it to class or to Carpe in Adams. I leave it on for a minute or two, but I always end up taking it off.