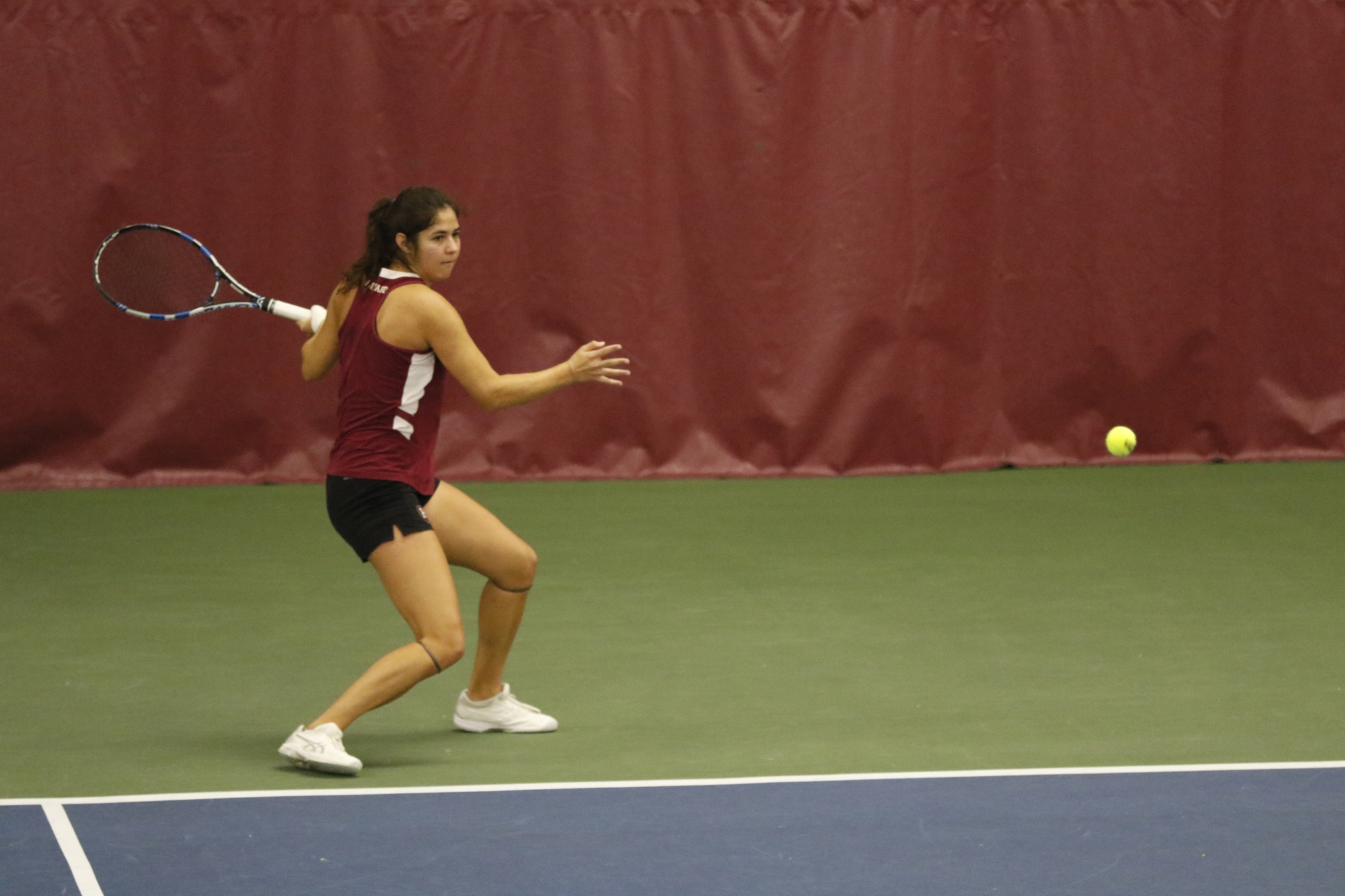 The Crimson won 15 of its 20 singles matches and nine of its 13 doubles matches en route to five flight victories at the Harvard Invitational By Timothy R. O'Meara
By Eliot Min, Contributing Writer

Captain Natasha Gonzalez ripped a vicious cross-court forehand at her opponent, Erica Di Battista of Boston University. Di Battista was unable to handle the shot and missed the return long: once the ball landed beyond the baseline, Gonzalez turned towards her teammates and let out a triumphant roar.

With the point, Gonzalez had won the finals match and the flight A singles bracket for Harvard at the Harvard Invitational last weekend. Her performance highlighted the team’s outstanding showing at the event, which included teams from Boston University, Cornell, and Georgetown. The Crimson won 15 of its 20 singles matches and nine of its 13 doubles matches en route to five flight victories. Gonzalez, who also won the flight A doubles alongside sophomore Rachel Eason a day prior, ended the invitational with a first-place finish in both flight A singles and doubles.

“We’ve been training really hard all fall,” Gonzalez said. “So it's really exciting to get to put what we've been working on in practice in matches, and to see the hard work pay off. The whole team did very well which is very exciting.”

On the first day of the event, Harvard won six of its eight doubles matches and seven of its nine singles matches. In the flight A doubles bracket, Gonzalez and Eason powered through opponents from Cornell and Boston University to reach the championship round, which took place on day two of the invitational. Sophomore Rachel Lim and freshman Sophia Ho also won their matches against Cornell and Georgetown to set up an all-Crimson clash in the flight A championship match. In their singles matches, the team swept all six matches across flight A, flight B, and flight C.

“I think we were really excited for this weekend because we've been putting in a lot of hours on court and also on fitness. So I think everybody was really ready training for this weekend,” Lim said. “And I think the results this weekend are just a really great reflection of all the work that we're putting in.”

The Crimson women responded to tougher competition on the second day of the invitational with another set of strong performances. In the flight A doubles finals, Gonzalez, Eason, Lim and Ho put together a fantastic match that eventually ended with a hard-fought 7-6 victory in favor of Gonzalez and Eason.

In the flight B doubles finals, first-years Demi Snyder and Mihaela Marculescu posted a dominating 6-2 victory over their Boston University opponents to secure the doubles crown. Harvard also performed strongly in singles play, with Gonzalez, Marculescu, Lim and Ho all winning their semifinal matches to advance to finals on day three.

On the third and final day of the invitational, the Crimson continued to shine by winning the flight A, flight B, and flight C singles championship matches. Gonzalez, Marculescu, and Ho each secured titles for Harvard to conclude an incredible weekend for the hosts.

The Crimson does not have another competitive match until next March, when it squares off against Rhode Island at home on March 7th. However, the team will look to keep working hard and avoid complacency during the offseason.

“We are lifting a little bit more now. And we’ll keep practicing. And we'll just be doing practice matches with ourselves, probably play a tournament over winter break, and then come back in January sharp and ready to go,” Gonzalez said. “There's still things [we] want to work on that [we] are going to work on now. And we're going to build on so that when we come back in the spring will be stronger.”

“We're really happy with [the results from this weekend], but even more so it's motivation for us to keep working hard to get to the level where we want to be as we head into the spring season,” Lim added. “[We’ve] been working out in the gym, we've been doing a lot of hard work like increasing the weight of everything, we've been getting faster and stronger. And I think we've been focusing a lot on like holding each other accountable, trying to get each other to be really focused on pushing each other and having that immense team support.”