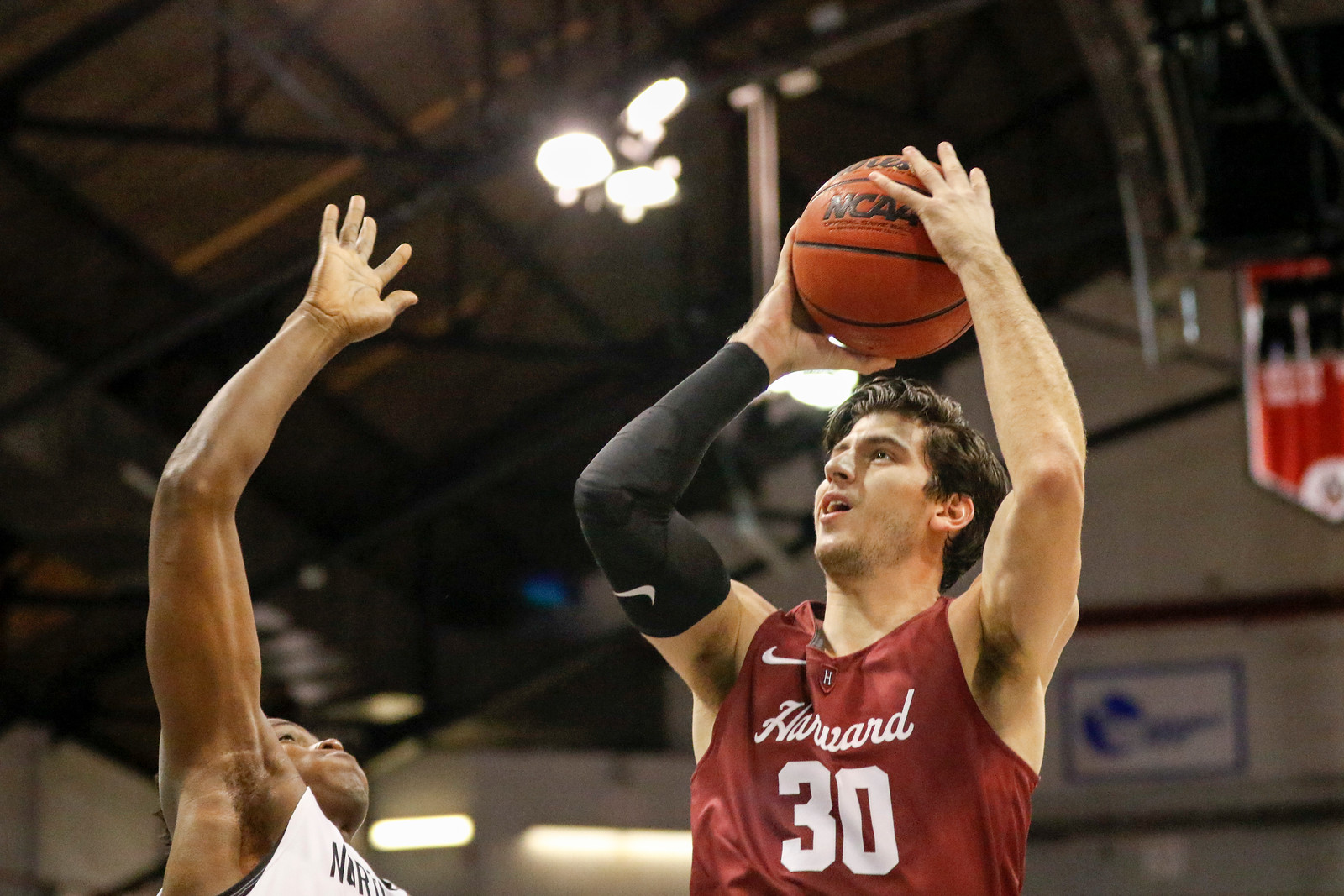 Harvard rallied for much of the second half but to no avail. By Timothy R. O'Meara
By Mahtab Shihab, Crimson Staff Writer

In a game that came down to the wire, the Crimson’s spirited second-half comeback attempt fell just short.

On the road for the first time this season, Northeastern handed Harvard its first defeat off of a record-setting 44-point effort from captain Jordan Roland.

Still without senior point guard Bryce Aiken (who is day-to-day with a calf injury) and senior forward Seth Towns (who is still rehabbing a knee injury), the Crimson went into Matthews Arena with the formidable task of upending a tough Huskies team that it had fallen to last year.

As was the case in its last game against MIT, Harvard’s performance was a tale of two halves. The team only had 27 points in the first period and shot 39 percent from the floor, while giving up 63 percent shooting to Northeastern. In the second half, despite scoring nearly twice as many points and shooting at a 54 percent clip, the team could not make up for the 17-point deficit entering halftime.

“I thought their first half performance, getting us in a hole right out of the blocks, was a huge difference in the game,” coach Tommy Amaker said. “We talked about getting off to a better start and it didn’t go that way.”

The Crimson had the unenviable job of figuring out how to defend senior guard Jordan Roland, who just scored 39 points on 15-of-24 shooting against Boston University in the Huskies’ season opener. The Syracuse, N.Y. native notched 35 against Harvard last season and continued to have his way against the Crimson defense throughout the game, finishing with a career-high and school-record 44 points.

“Certainly, the effort by Roland was outstanding this game, like he was the previous game against BU,” Amaker said. “[He is] a tremendous threat and player all over the floor, and played a full 40 minutes without ever looking like he was sweating or tired. Just an outstanding performance by that team and by that kid in particular.”

In the early minutes of the game, Roland immediately made his presence felt by scoring 11 straight points to start the game including three triples, giving Northeastern an early 11-2 lead. He would continue to be a scoring threat throughout the first half, ending with 20 points in the frame.

Even when Roland wasn’t scoring, the Huskies continued to capitalize on his penetration, leading to open three opportunities for his teammates throughout the first period. The lead would balloon to double digits in the first three minutes of the game and remained that way for the rest of the first half. 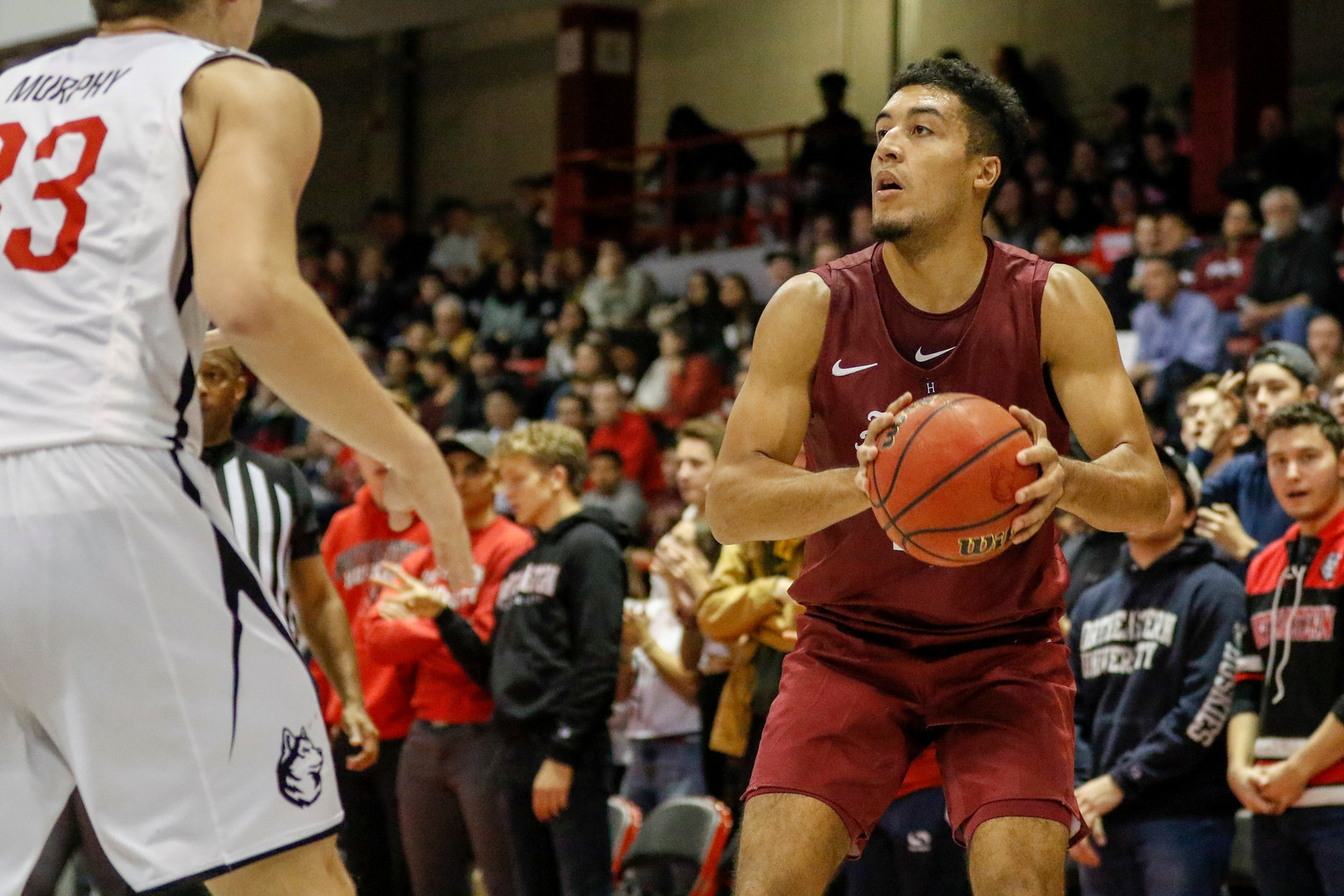 The Crimson could not withstand a 44-point outpour from Northeastern's Jordan Roland. By Timothy R. O'Meara

In the second half, the Crimson changed the momentum of the game with better perimeter shooting and reduced turnovers. After being outscored in the field by 18 points in the first half, Harvard limited Northeastern to only three triples in the second period.

“We honestly thought at the half we should get our confidence and our hope up,” Amaker said. “We certainly hoped they wouldn’t shoot as well as they did in the first half, and we talked about that, stayed with our discipline, stayed with our game plan, [and] stayed with our coverages ... I’m pleased we were able to cut down the turnovers from the previous game, especially as something that bothered us last season.”

The team came in with a renewed energy and would go on an 18-3 run that would ignite its comeback. The bench scoring of sophomore guard Noah Kirkwood and junior forward Danilo Djuricic — who contributed a combined 27 points — was integral towards the Crimson’s efforts at counteracting the Huskies’ hot scoring.

“We did a tremendous job of fighting our way back and we talked at halftime about making sure we were going to fight and we were going to play with intelligence,” Amaker said. “And we thought if we did those two things we might have a chance at making a run at it. I was very pleased and proud of that.”

Nevertheless, Northeastern did not collapse and managed to close out the game thanks to consistent scoring from Roland and critical free throws down the stretch. The Huskies star continued where he left off in the first half, tallying 24 in the second period and hitting clutch baskets down the stretch.

Harvard will continue its non-conference slate on Sunday as it returns to Lavietes Pavilion to face Maine in a heavily-favored matchup for the Crimson.