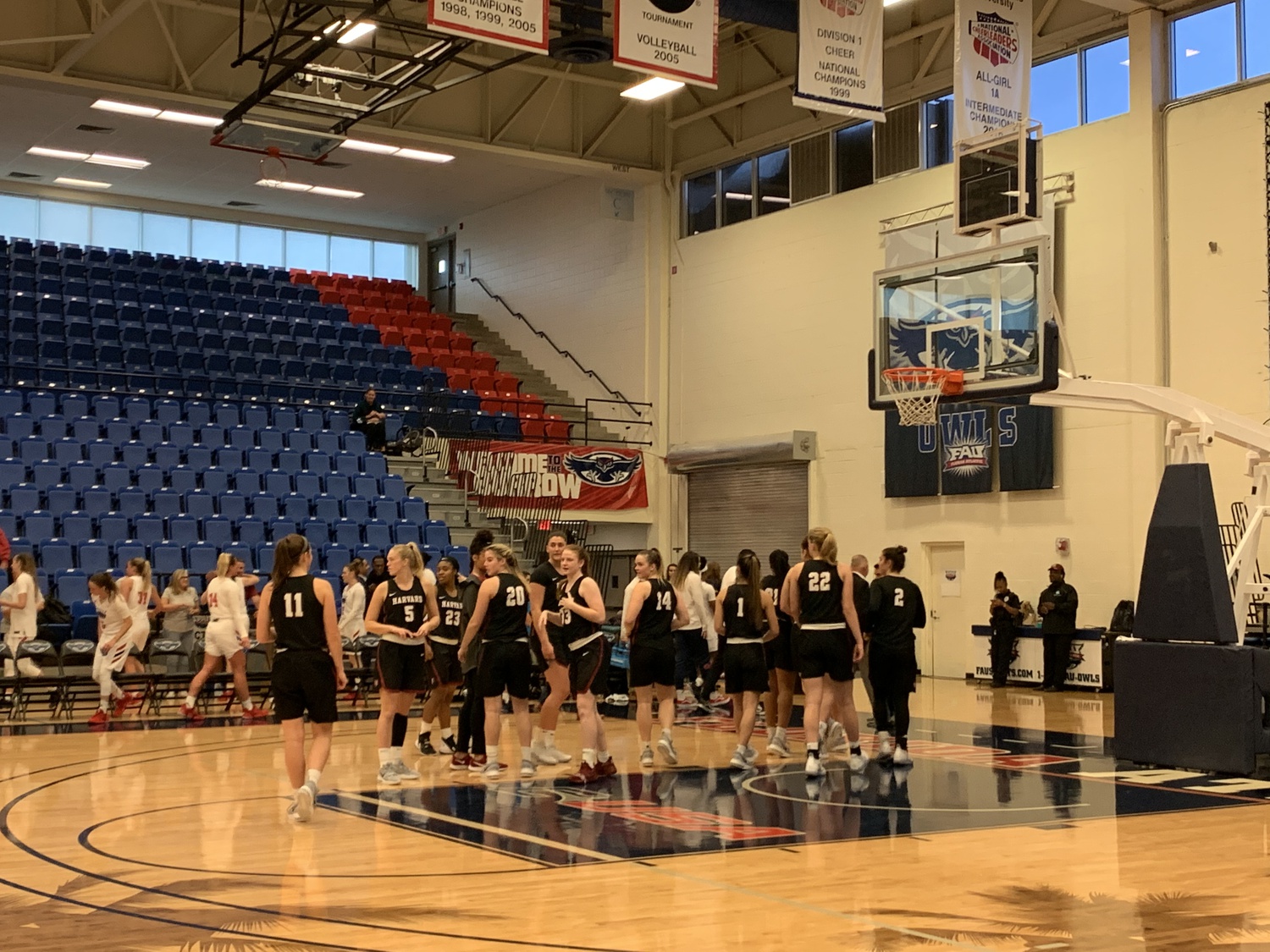 After finishing their final papers and exams in frosty Cambridge, members of Harvard Women’s Basketball flew down to Boca Raton to play in Florida Atlantic University’s Holiday Classic this past weekend. In addition to the Crimson, the tournament featured host FAU, Saint Joseph’s University, and Furman University. Taking the court for the first time in 13 days, Harvard had one of its worst performances of the season against Saint Joseph’s, losing by more than twenty points. The squad bounced back the following day in dramatic fashion, easing by FAU on its home court in the second half. The game served as an uplifting coda to the decade for the Crimson (8-4), who will now enter highly-anticipated Ivy League play in January.

Leading by a point at halftime, Harvard bested FAU (6-5) thanks to the Crimson’s ferocity on defense and patience on offense in the second frame.

FAU outmaneuvered Harvard’s woman-to-woman defense in the first half. FAU ball handlers made precise entry passes to their forwards fronting in the post and dished back-door bounce passes to guards who finished at the rim.

Harvard adjusted to FAU’s cutting-heavy offense in the third quarter by jumping in passing lanes. Repeatedly, FAU players passed the ball directly into Crimson players’ hands. Once Harvard foiled the bread and butter of FAU’s offense, the host team had few other options. FAU scored only 8 points in the third quarter, six of which came from consecutive three-pointers from sophomore forward Juliette Gauthier, and coughed up the ball five times in the period.

“I think their work ethic is especially deep in the defensive end, game in and game out,” Delaney-Smith said. “That's where they're at their best.”

Sophomore guard Maggie McCarthy led the Crimson’s defense against FAU. McCarthy displayed grit in an action-packed 35 minutes of play. She repeatedly sacrificed her body, diving on the floor for loose balls and colliding with opponents while fighting over a rebound.

A player whose greatest contributions to her team often reside in intangibles like hustle and leadership, McCarthy’s statistics in Saturday afternoon’s game truly reflected her impressive performance. She ended 2019 in personal-record-setting style, tallying a career-high seven steals, a career-high 15 points, and a personal-record-tying 11 rebounds.

McCarthy also set the tone for Harvard’s offense in the second half by slowing down her teammates and orchestrating the team’s motion.

Moving the ball around the court quickly, though in control, Harvard’s guards found openings to lob the ball into senior forward Jeannie Boehm, who was being fronted in the post. Boehm’s formidable presence in the paint opened up her teammates from behind the arc, enabling Harvard to take smart shots.

“It was fun to get it in and out and just play really selfless basketball like we do,” Boehm said. “When we move the ball like that, it seems like just good things happen.”

Boehm also finished 2019 with a personal-record performance, grabbing a career-high 16 rebounds. She completed the double-double with 12 points while also dishing out four assists.

Though Harvard played some of its best basketball in the second half, its first half proved rather lackluster. Despite leading FAU at halftime, Harvard responded to its opponents’ unremitting full court defensive pressure by rushing. Consequently, the Crimson failed to find a rhythm on offense and turned the ball over nine times.

Careless free throw shooting compounded Harvard’s poor offense in the first half. By going 0 for 4 from the line in the neck-and-neck first half, Harvard allowed FAU to hang around.

Harvard led at the end of the first frame thanks to senior guard and co-captain Mackenzie Barta’s shooting. Barta was shamelessly confident from the perimeter; showing off a scary quick release, the co-captain knocked down three-point shots with defenders in her face. Barta hit three triples in the first quarter alone and finished the game with 14 points.

Saturday’s game served as a barometer of progress for Barta, a player who started her senior season by only shooting uncontested three-pointers.

For Delaney-Smith, Barta’s development is gratifying and not a total surprise.

“She's playing like we want her to play, like a shooter,” she said. “I've been trying to get her to do that forever.”

Sometimes it takes the Crimson a quarter or two to find its rhythm on offense. In Friday’s game, that rhythm never came.

“It's not unusual for Harvard kids after exams,” Delaney-Smith explained.

For whatever the reason, Harvard did not show up on offense. The team went 3 for 22 from three point range and 2 for 6 from the free throw line.

Only one Harvard player scored in double digits, as junior forward Rachel Levy tallied 10 points off the bench. The Boca Raton, Florida, native looked at home playing in her hometown. The following day, she scored six points in the fourth quarter against FAU to build on Harvard’s lead.

Saint Joseph’s went on to drop its next matchup to Furman in the championship game Saturday afternoon. En route to its 63-48 victory, Furman’s senior guard Le’Jzae Davidson led both teams in scoring with 24 points, including seven three pointers.