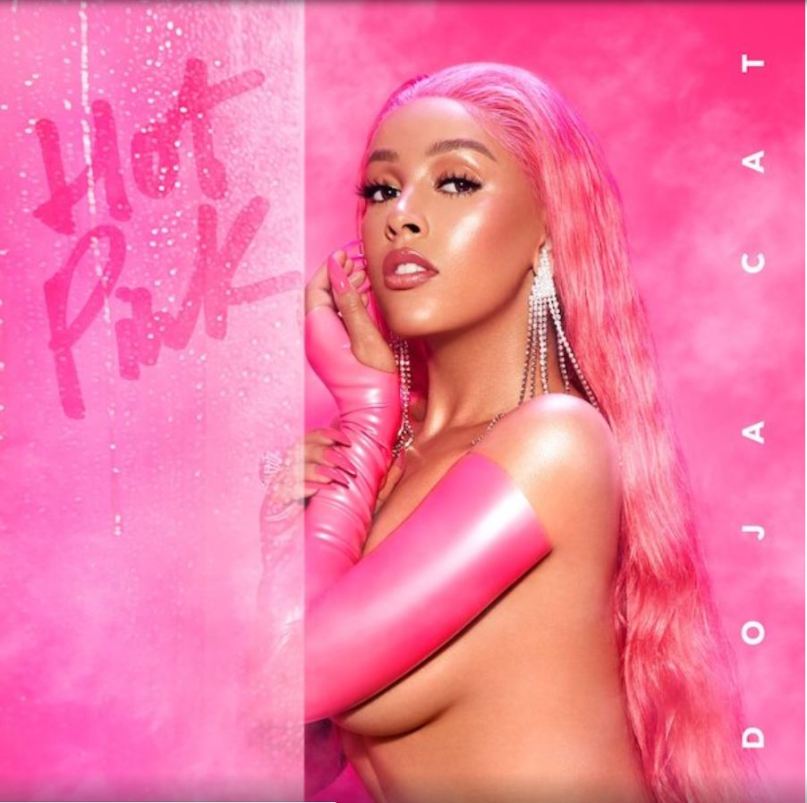 Doja Cat has come a long way since her song “Mooo!” went viral last year. After gaining national attention from the cow-themed song, the rapper released a deluxe version of her debut album “Amala,” collaborated with fellow rapper Rico Nasty on the hit single “Tia Tamera,” and saw the remix of her song “Juicy,” featuring Tyga, reach the Billboard Hot 100 — her first song to do so. Despite facing controversy over resurfaced homophobic tweets from 2015, Doja Cat continues to ride out her success with the release of her second studio album “Hot Pink.” On “Hot Pink,” released Nov. 7, Doja Cat raps and sings about sexual desire and authority. Through her sexually explicit lyrics and dynamic rap verses, Doja Cat makes it known that, when it comes to relationships, she is in charge.

Those familiar with “Amala” know that Doja Cat is not one to shy away from singing about sex or what she wants. (See: “Amala’s” opener “Go To Town,” a song about cunninlingus.) While the songs on “Amala” do refer to Doja Cat’s sex life, the references are wrapped up in metaphors. On “Hot Pink,” the artist is more explicit about her experiences. The opening track, “Cyber Sex,” is a perfect example of how personal Doja Cat’s music has become. “Cyber Sex” is like a rated R version of Beyoncé’s “Video Phone,” with lyrics that reflect Doja Cat’s reluctance to let physical distance spoil her sex life (“When he off work, he calling me on Skype” and “Can’t give head, you give me the FaceTime”). The song is just the beginning of Doja Cat expressing her sexual freedom and demanding what she wants from her partners.

On what might be “Hot Pink’’’s most NSFW song, “Rules,” Doja Cat sets some parameters for her partners. With the first lyrics of the song, “Said play with my pussy / But don’t play with my emotions,” the rapper immediately takes charge of both her lover and her listeners. The second verse of the track is the best verse on the album. Over a smooth bass line, minimal guitar, and steady drum beat, Doja Cat raps about wanting a partner who is devoted (not deceitful), has money, and knows how to please her. The artist’s flow is completely original as she switches from fast, steady wordplay about pleasure to a breathy taunt to or to rhythmic shouting for a lover who does not play mind games. Doja Cat’s lack of modesty coupled with her unique rap game makes “Rules” a standout song.

The first half of “Hot Pink” is strong and self-assured, but the second half tapers off. Songs like “Cyber Sex,” “Rules,” “Bottom Bitch,” and “Won’t Bite” (featuring Smino) — a song that has barking sounds in the background — are uniquely Doja Cat. The artist showcases her songwriting and performing abilities best on these songs. “Say So” and “Addiction” are fun and upbeat, but the rapping on both tracks is not up to par with the verses on “Rules.” In comparison to “Won’t Bite,” “Like That (featuring Gucci Mane)” is flat-out boring — not even Gucci Mane could save it, offering instead an uncharacteristically unspectacular verse. While Doja Cat’s singing on “Streets” is enticing, with lyrics such as “I found it hard to find someone like you / Like you, like you / Send your location, come through,” the song is not particularly unique (recall “Location” by Khalid).

Doja Cat’s sexual freedom, ability to switch flow in the middle of a verse, and fun wordplay are all commendable elements of “Hot Pink.” Unfortunately, the latter half of the album do not reach the expectations set by the former. While none of the songs on “Hot Pink” are so unenjoyable that they need to be skipped, the less unique tracks do not warrant the same attention that the standouts do. “Cyber Sex,” “Rules,” “Won’t Bite,” and “Bottom Bitch” all exemplify the wasted potential of the rest of the album. Still, in spite of its pitfalls, “Hot Pink” in it entirety is still worth a listen or two, if just to hear a woman proudly in control of her sexuality and her sound.

— Staff writer Annie Harrigan can be reached at annie.harrigan@thecrimson.com.