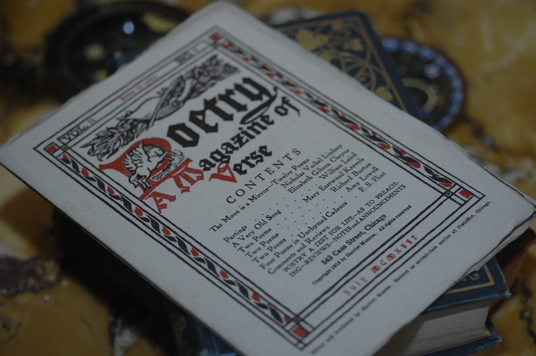 "Poetry: A Magazine of Verse" is one of the leading monthly poetry journals in the English-speaking world. By Courtesy of Jeff W. Whitehead Rare Books
By Nuri Bhuiyan, Crimson Staff Writer

For about half of American poetry’s history, it was actually quite British. That is because British poetry served as the model for many colonist writers around the start of American poetry in the 17th century. It was during the 19th century that we saw the rise of a uniquely American poetry — one that grew more and more distinct as we entered the 20th century. The year of 1912 was an especially important point in the trajectory of American modern poetry, due to the inception of a few key poetry practices and institutions.

In 1911, at age 51, a female poet roamed downtown Chicago in search of support for a publication solely for poetry. This was bold and unprecedented. Never before had the U.S. had such a journal. The context didn’t make it much easier; there was little good poetry and even less demand, and not much hope of Chicago diverting artistic attention away from the well-recognized prestigious forums of the Art Institute and the Chicago Symphony. At the same time, the woman — Harriet Monroe — saw the presence of such forums, in addition to a world-class symphony and opera, theater troupes, dance companies, and so on, as a source of potential in Chicago’s early 20th century cultural landscape. Thus, she set out to elevate poetry in Chicago’s cultural consciousness in the same manner as other arts had. After much work and planning, including performances of her poem “The Columbian Ode” at the opening ceremonies of Dedication Day at the Chicago World’s Fair and constant networking with Chicago’s social elites, Monroe was eventually able to secure the financial backing for the endeavor, and the first issue of “Poetry: A Magazine of Verse” appeared in October of 1912.

This first issue of “Poetry: A Magazine of Verse” from 1912 included Monroe’s “Open Door Policy,” which Monroe put forth this way: “The Open Door will be the policy of this magazine—may the great poet we are looking for never find it shut, or half-shut, against his ample genius!” In this way, the magazine supported and perpetuated poetry with diversity in style, genre, approach, etc. The magazine established its reputation early on by publishing the first important poems of Hilda Dolittle (commonly H.D.), T.S. Eliot, Marianne Moore, Ezra Pound, Carl Sandburg, Wallace Stevens, William Carlos Williams and more now-famed poets, and it quickly became the world’s leading English-language poetry journal. The magazine, now under the less redundant title of “Poetry,” is credited with playing a pivotal role in the “Renaissance in American Poetry” as the oldest monthly devoted to verse in the English-speaking world.

Although the concept of imagism originated as early as 1908, when T.E. Hulme spoke of an exacting poetry with no excess verbiage, imagism as a movement really began in 1912 with the famous modernist poet Ezra Pound’s efforts. In 1912, after reading H.D.’s “Hermes of the Ways,” Pound signed the poem “H.D., Imagiste” before sending it to Monroe’s Poetry magazine in October of that year, and he himself used the term “Imagiste” when publishing Hulme’s Complete Poetical Works. Imagism — a style of poetry favoring simplicity, clarity of expression, and extreme concision through concrete visual images, as a response to the romanticism of its Victorian predecessors — has been described as the most influential movement in English poetry.