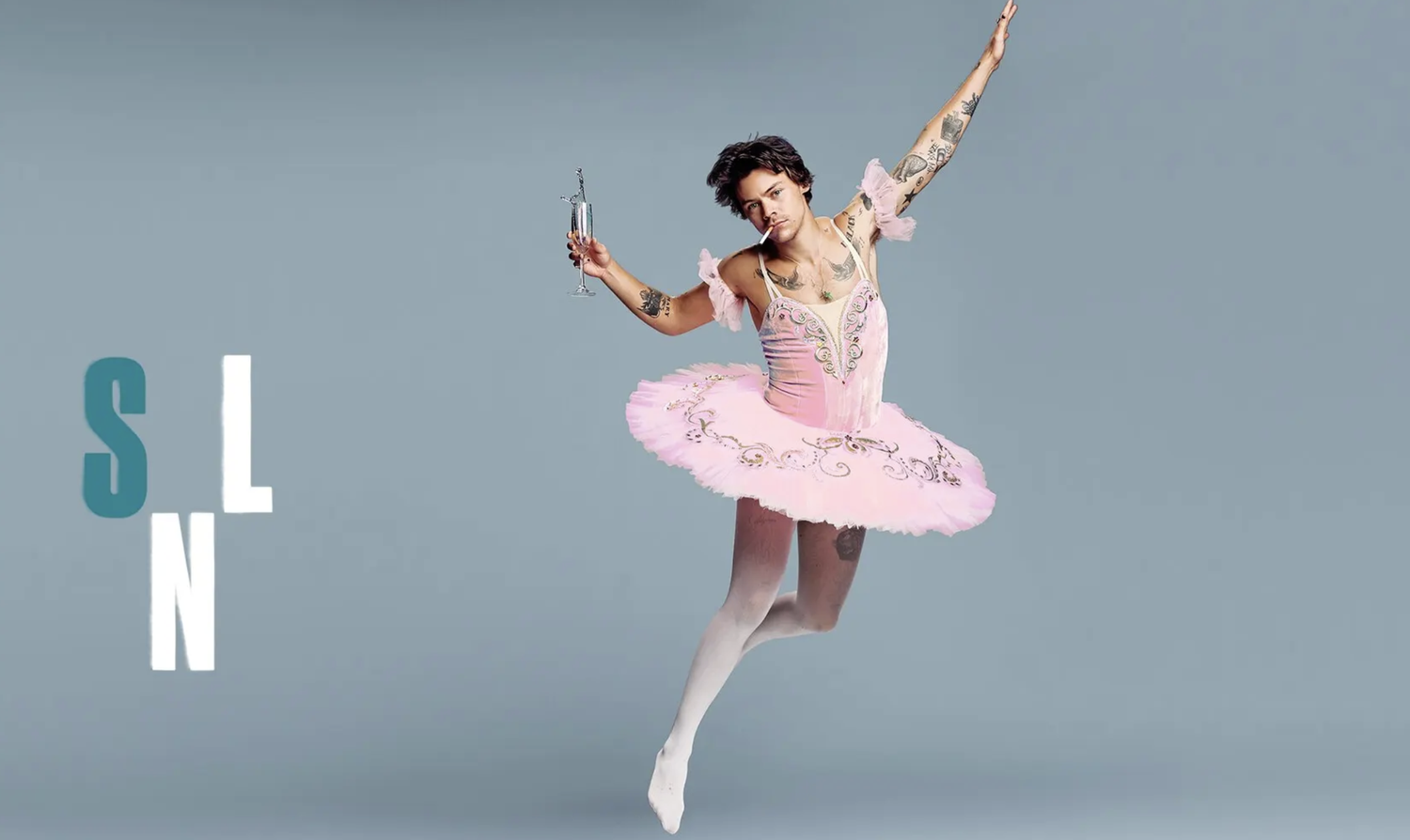 Harry Styles' appearance on SNL made a splash. By COURTESY OF NBC
By Sara Komatsu, Contributing Writer

Harry Styles recently made his debut in the coveted spot of SNL host — doing double duty, in fact, as both host and musical guest. His episode included skits about Sara Lee (yes, the bread company), impeachment, airline pilots, a childbirth class, and more. Beyond his dry humor, Styles, as expected, donned several spectacular outfits for the show: This time, the repertoire included a full tutu and tights for the promotional photoshoot. Styles’ style has always been a point of controversy and a highly discussed topic — but this particular photoshoot is a departure from his usual flamboyant style.

Styles’ photos, which both he and Saturday Night Live posted on their respective Instagrams, showed the singer posed with champagne glass in hand and cigarette clamped between his pouty lips.

Though it seems dramatic to call it appropriation, that is essentially what these photos feel like to the ballet community. Popular use of ballet aesthetics almost never comes from a place of genuine respect and wanting to represent the art form truthfully. Rather, it often stems from a caricature of the hyper-traditional, classical, and uptight image people tend to have about ballet and ballerinas — prim, proper, and conservative.

Styles, though garbed in a legitimate tutu, is not so convincing in his poses, even for a still photo. He clearly has no knowledge of dance, and shows no regard for representing it in a respectful way either.

And it isn’t the fact that Styles is male presenting, either. There are, in fact, men who wear tutus and pointe shoes — Les Ballets Trockadero de Monte Carlo is a world-renowned example — but they are professionally trained and incredibly talented dancers with extensive backgrounds in the art form. They have the creative agency to create comedic ballets with the awareness and care for the history of ballet that such work requires.

Styles is not the only celebrity to have appropriated the art form. In 2016, Kendall Jenner’s photoshoot with Vogue featured the model prancing around a ballet studio wearing pointe shoes that she clearly has no idea how to wear — and the ballet world blew its top. Reactions pointed out that “Ballet dancers don’t train 7+ hours a day, 7 days a week, to be represented by Kendall Jenner and her dodgy feet…” (This tweet has since been deleted.)

Even the notorious Abby Lee Miller of “Dance Moms” commented on the shoot on Instagram, writing, “… I cannot be a fan of this shoot. There are so many amazing dancers in the world… Kendall Jenner is not one of them!”

As Miller and many others pointed out: Why not use a real, trained ballerina? Ballet dancers hold no issue with promoting the ballet art in popular culture, but celebrities with no real dance background misrepresenting the art form is simply disrespectful.

Though, as some have pointed out, “It’s not that deep” — and though appropriating ballet is nowhere near as serious as cultural appropriation, it is demeaning to see Styles or Jenner in a tutu, posed in such a way that could be read as mocking to ballet as an art form. This free use of ballet aesthetics with no education about the history and even the reality of the work ignores and belittles the immense hard work and talent that ballet requires. There is no awareness or respect of the ballet world and its lengthy history and many traditions among celebrities who put on tutus and pointe shoes for entertainment purposes. Even as a ballet student, I remember not being given a proper pancake tutu until I was much older, with many years of training under my belt. If Styles, or anyone else, wants to put on a tutu, they should put in the hours of work to earn that right.