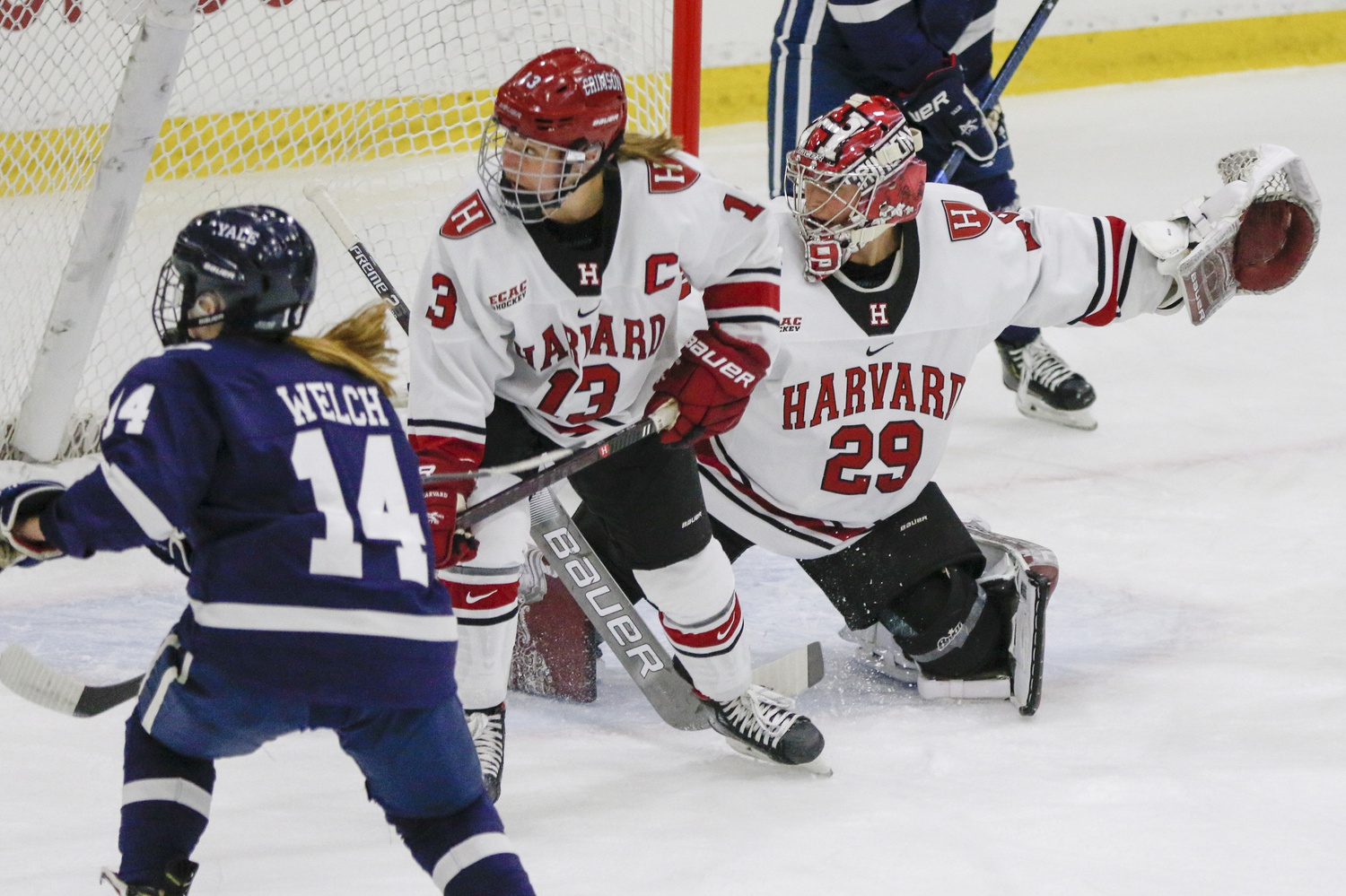 The Harvard defense rallies in front of its own net en route to putting together a 5-2 victory over Yale on Nov. 2. By Timothy R. O'Meara
By William C. Boggs, Crimson Staff Writer

After a 5-0-0 start in ECAC play and an appearance in the top 10 of national rankings, Harvard has since cooled off in a 4-game nonconference skid. Nonetheless, although ultimately coming up short, the squad battled to hard-fought finishes against the nation’s top two teams—No.2/2 Wisconsin and No.1/1 Minnesota—last weekend at the Country Classic, a showcase hosted at the Ford Ice Center Bellevue, the NHL’s Nashville Predators’ practice facility. With the tournament in the books, the Crimson (5-4-0, 5-0-0 ECAC) will be looking to leverage the momentum as it returns to ECAC play this weekend on the road against Yale (6-5-0, 3-3-0 ECAC) and Brown (1-10-0, 1-5-0 ECAC), seeking to both end the losing streak while maintaining a perfect conference record at the same time.

“We got better as the weekend [at the Country Classic] went on, and I think we’re going to carry that steam into this weekend and then hopefully after winter break too,” said sophomore goaltender Lindsay Reed, who posted 91 saves outside of Nashville and has also backstopped the Crimson with a .902 save percentage on the season.

In early November, Harvard squared off with the same two conference foes in a weekend home set, prevailing with a 4-1 victory over the Bears and a 5-2 defeat of the Bulldogs. With these wins already recorded, the Crimson has a blueprint for this weekend and season sweeps over the two opponents on its mind, which would go a long way in the ECAC and Ivy standings—not to mention the importance of righting the season’s momentum before exams and winter break. Since all Ivy teams that sponsor varsity programs also play in the ECAC, games within the Ancient Eight take on an added intensity and double-count in the standings.

“We have to realize we’re still undefeated in league play—we’re 5-0,” Reed said. “Everyone still wants to beat us...These are two huge Ivy League and ECAC games.”

Looking back at last weekend, the shots on goal battle presented Harvard with a challenge and should be a pivotal element to the Crimson’s success. Against the Badgers, Harvard found itself locked in a 2-1 game into the second half of the third period. However, the disparity in offensive opportunities added up, and Wisconsin managed to ice the game with three late third-period goals. By the time the game had ended in a 5-1 Badger victory, Wisconsin had toppled Harvard in shots on goal, 57-15, so the offensive advantage eventually translated into a win, albeit sealed late in the last stanza. The next day, a similar trend repeated, with the Gophers turning a 2-0 third period lead into a 4-0 final behind the weight of a 43-21 shots on goal advantage. While the Crimson lost these two games, Harvard put up very different numbers in its early November wins. In the first Brown game, the Crimson demolished the Bears in shots, 59-14, and in the first go-around against Yale, Harvard narrowly trailed for the game, 30-27, but initially outshot the Bulldogs, 21-18, in the first two periods.

“We definitely tried to be a little cute at times and didn’t take the shots when we could,” junior forward Becca Gilmore said. “First peppering the goalie—getting a ton of shots again—that kind of opens up the more finesse plays closer to the net. We can definitely learn from Wisconsin and Minnesota. It’s something they did well [taking a lot of shots].”

While the Crimson has only tallied four goals over its last four games, the offense clicked on all cylinders before the non-conference foray. In the opening five contests, Harvard put up a whopping 25 goals in its first five games due in large part to the offensive prowess of Gilmore and sophomore forward Anne Bloomer, who have totaled 10 points apiece on the season. Sophomore forward Dominique Petrie and junior forward Keely Moy have also paced the attack with nine points each.

An offensive jumpstart does not just depend on volume, however, but also on timing. Fast starts can set a tone for the entire game. Against Yale, the Crimson managed to jump out to a 3-0 lead, and against Brown, a 2-0 advantage. While both the Bulldogs and Bears did cut the Harvard advantages to one eventually, with the Bears sticking around at 2-1 in the final frame, the early momentum proved to be enough to set the Crimson over the edge. On the road—especially in rival games against nemeses like Yale and Brown—setting the momentum takes on added importance and would go a long way to creating a victory.

“While we always focus on playing a full 60 [minutes], we definitely focus on the first few minutes of a period and the last few minutes of a period,” Gilmore said. “The practice this week has been phenomenal, and we’re coming off a really good weekend of playing together. If we just keep that momentum, we’re looking pretty good for this weekend.”

Notably, closing games on the offensive was a key to the Crimson in the last Yale-Brown pair of matchups and will be again this weekend. In each of the two games, Harvard converted one-goal nail-biters into three-goal comfortable margins, taking 2-1 to 4-1 against the Bears and 3-2 to 5-2 against the Bulldogs. Ultimately, this ability to make a final push boils down to intangibles more so than any particular set of skills.

“That’s really just relying on bench energy, and just heart,” Gilmore said. “Our team has a lot of it; we have good chemistry [and] we believe in each other. None of us ever really doubt that [we’re all working hard]. Lifting that energy, using the bench energy to escalate the game, is definitely what we’re going to rely on.”

In addition to offense and tenacity, defensively, the Crimson will be looking to put together a full, simplified game. To some extent, tilting the ice back to the offensive side will alleviate pressure and allow the team to focus more fully on individual roles.

“We need to keep it simple,” Reed said. “By keeping it simple, [I mean] protecting the house and everyone doing their own respective job. Then everything will take care of itself…We can score more goals and pull away from a one-goal lead or come back from being down.”

As for the opponents, Yale and Brown have gone in very different directions entering the weekend set with Harvard. While the Bulldogs have not been stellar, they have positioned themselves above .500 overall and remain a threat in the league. The Bears, on the other hand, have struggled, only winning one game so far on the campaign. Nonetheless, with the parity in the conference, any team can win on any given night, especially given the proximity, rivalry, and familiarity between Harvard and its opponents—not to mention that both Yale and Brown will be looking to avenge games that them saw them cut the deficit to one before Harvard pulled away.

With the stage set for a pivotal conference weekend, the puck drops tonight at 6:00 pm in New Haven before a 3:00 pm Saturday matinee in Providence.
— Staff writer William Boggs can be reached at william.boggs@thecrimson.com. Follow him on Twitter @BoggsTHC.