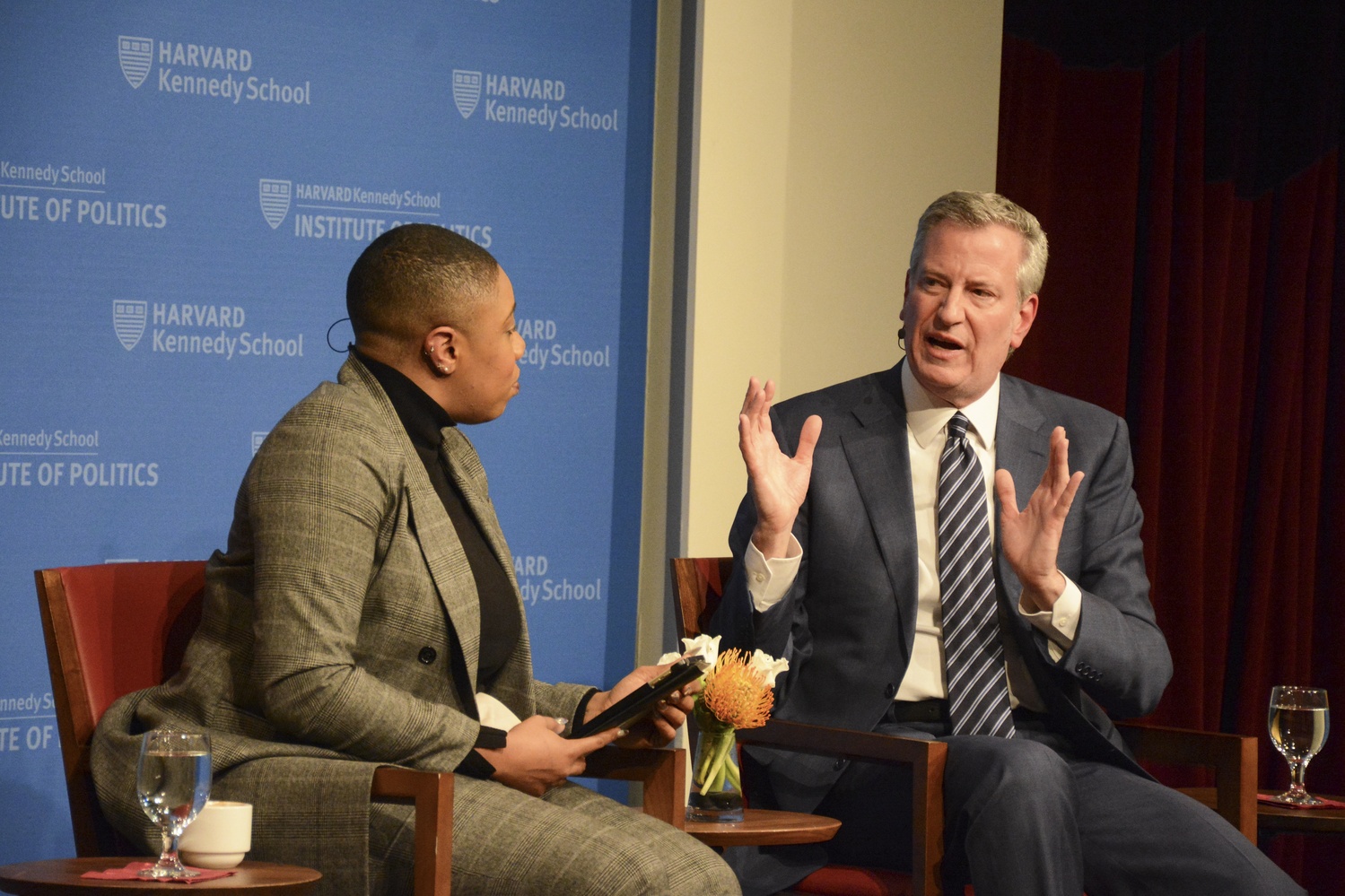 New York City Mayor Bill de Blasio criticized Amazon for walking away from a planned second headquarters in Long Island City at the Harvard Kennedy School Institute of Politics Thursday evening, hours after the withdrawal was made public.

Event moderator Symone D. Sanders, former national press secretary for Bernie Sanders’s 2016 presidential campaign, opened the conversation with de Blasio by reading from a statement he released Thursday afternoon in which the mayor lambasted Amazon for “[throwing] away” the opportunity to build a new corporate office space in New York City. De Blasio reiterated his thoughts at the IOP, saying that the combative attitudes of Long Island City community members should not have deterred Amazon from following through with its plans.

De Blasio and New York Governor Andrew Cuomo were major supporters of Amazon’s HQ2 proposal, which was expected to generate $27.5 billion in tax revenue over 25 years, and bring 25,000 new jobs to the city. Amazon said pushback from politicians was a major reason for the cancellation.

“A number of state and local politicians have made it clear that they oppose our presence and will not work with us to build the type of relationships that are required to go forward with the project,” Amazon wrote in a statement Thursday morning.

De Blasio said it was appropriate for activists and politicians to voice concerns about Amazon’s proposal, but he added that the company should have stuck with their decision and addressed those concerns.

“That’s democracy, and that’s okay, and this is why this whole thing is so strange and so distressing to me,” de Blasio said. “Instead of an actual dialogue to try and resolve those issues, we get a call this morning saying we’re taking our ball and we’re going home. I’ve never seen anything like it.”

In the conversation on Thursday, Sanders also asked de Blasio about the challenges of governing a city renowned for its ethnic and cultural diversity. De Blasio acknowledged that such challenges exist but shifted the focus to the issue of socioeconomic inequality.

“All of the communities are trying to move ahead and sometimes people feel there’s not enough for everyone,” he said. “If there’s something that unites us — and I believe this fundamentally — it is our economic reality. We’re all struggling to get by, except the one percent.”

“If we’re so scared to create a fair tax rate, we’re going to be stuck in a very unequal, very dangerous situation,” de Blasio said. “The social fabric in this country is starting to fray. And I’m amazed by the way that more people in the elite don’t see the danger they’re creating for themselves.”

When asked by Kennedy School student Korey M. Te Hira about a potential 2020 presidential bid, de Blasio said that he has not ruled out the idea. He said though he has observed a trend of politicians rushing to announce their candidacy, he does not take the “exceedingly personal” decision to run lightly.

“What we are seeing in these last weeks is not the norm,” de Blasio said of recent announcements by Democratic presidential candidates. “There’s more than one way to do things.”