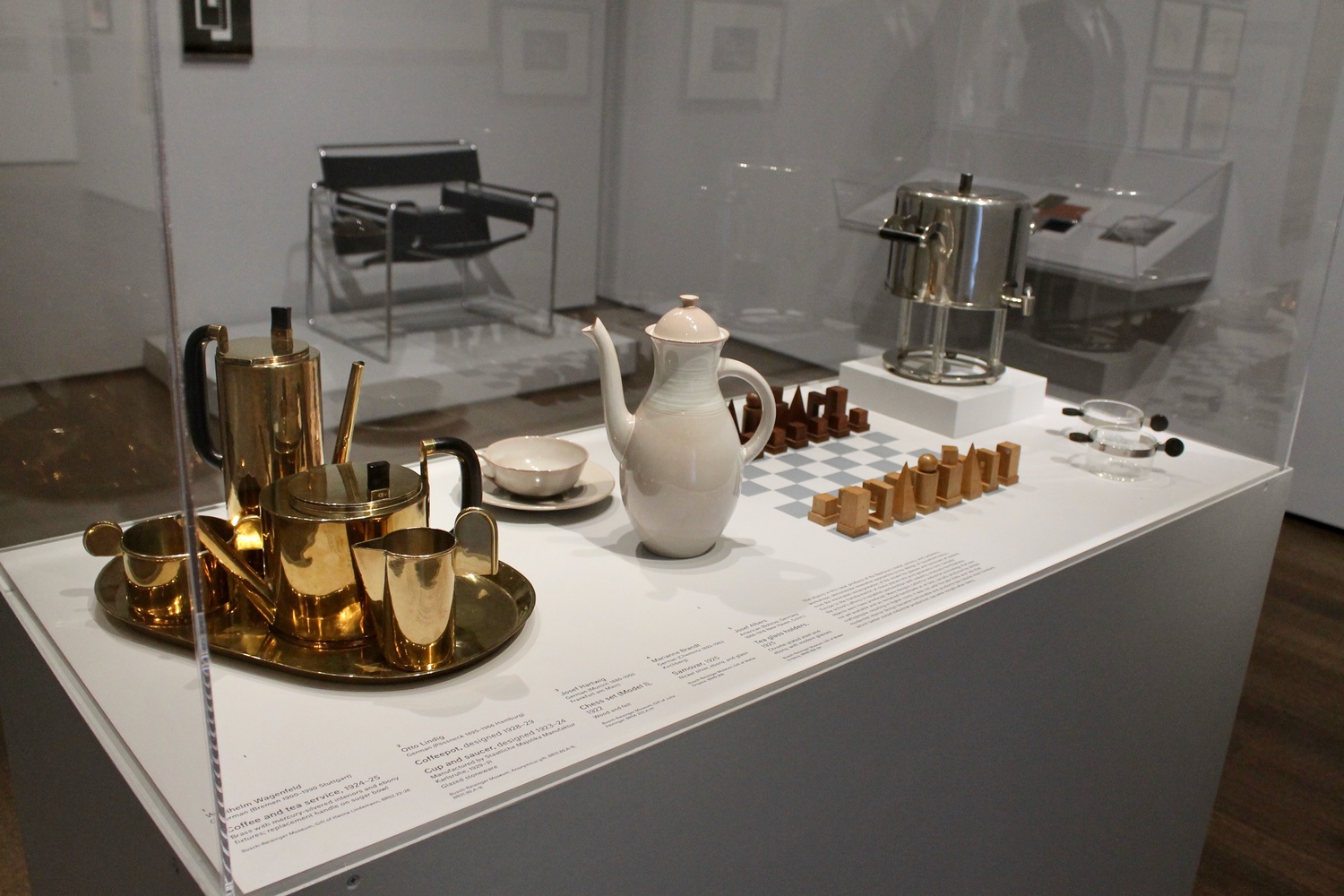 The Harvard Art Museums’ newest exhibit, “The Bauhaus and Harvard,” which opened on Feb. 8, showcases the interconnected history of the Bauhaus school — now 100 years old — with Harvard itself.

The term “Bauhaus” refers to a crafts and fine arts school founded by Walter Gropius, an architect and scholar who later joined Harvard’s Department of Architecture. Although the school was open for just 14 years between the two World Wars, the school is far from forgotten today. The exhibit’s 200 works by 74 artists encapsulate the diversity of both the Bauhaus and of Harvard’s own collection, which is typically housed at the Busch-Reisinger Museum. It includes a wide variety of artwork, from paintings by Lyonel Feininger to household contraptions by Josef Albers and Herbert Bayer to textiles by Gunta Stölzl and Anni Albers.

Berlin-based artist and author Judith Raum was the guest speaker at the opening celebration. Her speech and film, “Fabric In Space, Fabric Out of Space,” both attest to the exhibit’s commemoration of lesser-known figures. One of those figures was Otti Berger, a Bauhaus weaver, who despite her instrumental role in the school, could not build her legacy after being lost to the Holocaust.

Raum’s film, now on display at the Lightbox Gallery, shows a series of photographs of Berger’s textiles accompanied by a reading of her text, “Fabrics in Space,” on the tenets of weaving. The photographs display textiles lit and folded to show how their materials glisten and fray, mirroring Ernst Nipkow’s photography on view in the exhibit.

Raum lauded Berger, whom she said “managed to pull weaving out of an obscurity, which was the effect of the textile medium being traditionally associated with crafts and seen as a female medium, and as such, widely debased, also at the Bauhaus.”

While this exposition of Otti Berger and weaving as an art is central to the exhibit, “The Bauhaus and Harvard” contains a plethora of other forms and instrumental artists. Laura Muir, the exhibit’s curator, prefaced many of these additional items at the opening exhibition.

“I think one of the biggest choices was to focus on three main areas,” Muir said in a later interview. According to Muir, those three areas were “looking at material produced at the Bauhaus in Germany, material that represented the influence of Bauhaus instruction in the United States, then material related to the Harvard Graduate Center.”

As the exhibit snakes around, there are wall hangings of exemplary textiles, paintings by artists like László Moholy-Nagy, and architectural plans by Gropius and colleagues. “Verdure,” a painting by Bayer that used to span the dining hall at the Graduate Center, centrally occupies a back wall. Pieces such as a chair designed by Marcel Breuer, a lamp, tea glass holders, a chess set, and a curtain used to separate dormitories at the Graduate Center reference the practical and everyday appearances of the Bauhaus. The exhibit features artists like Lucia Moholy, who — despite not being credited for much of her work — contributed to the permeation of the Bauhaus’ widespread brand.

“The Bauhaus and Harvard” is not limited to the primary exhibit at the Fogg Museum. Muir said that it also includes a complementary exhibition at the Harvard Law School and at the Houghton Museum, interpretive signage at the Graduate Center, three courses this semester, and broader campus outreach.

“I like the exhibit because it gives a synoptic summation of all of the collections that Harvard has of the Bauhaus,” Erin A. Freedman, Harvard graduate student, said. “I had taken a class on the Bauhaus before, and I was really interested in the emphasis they put on female weavers and feminist approaches to abstraction.”

Muir also highlighted the role of students in the Bauhaus, which was foremost an instructional institution.

“Harvard played this major role in the reception of the Bauhaus in the United States,” Muir said. “And one of the most exciting things I think, is that the Harvard Society for Contemporary Art, which was an undergraduate group, staged the very first Bauhaus exhibition in the United States here at Harvard … it was really a student effort.”