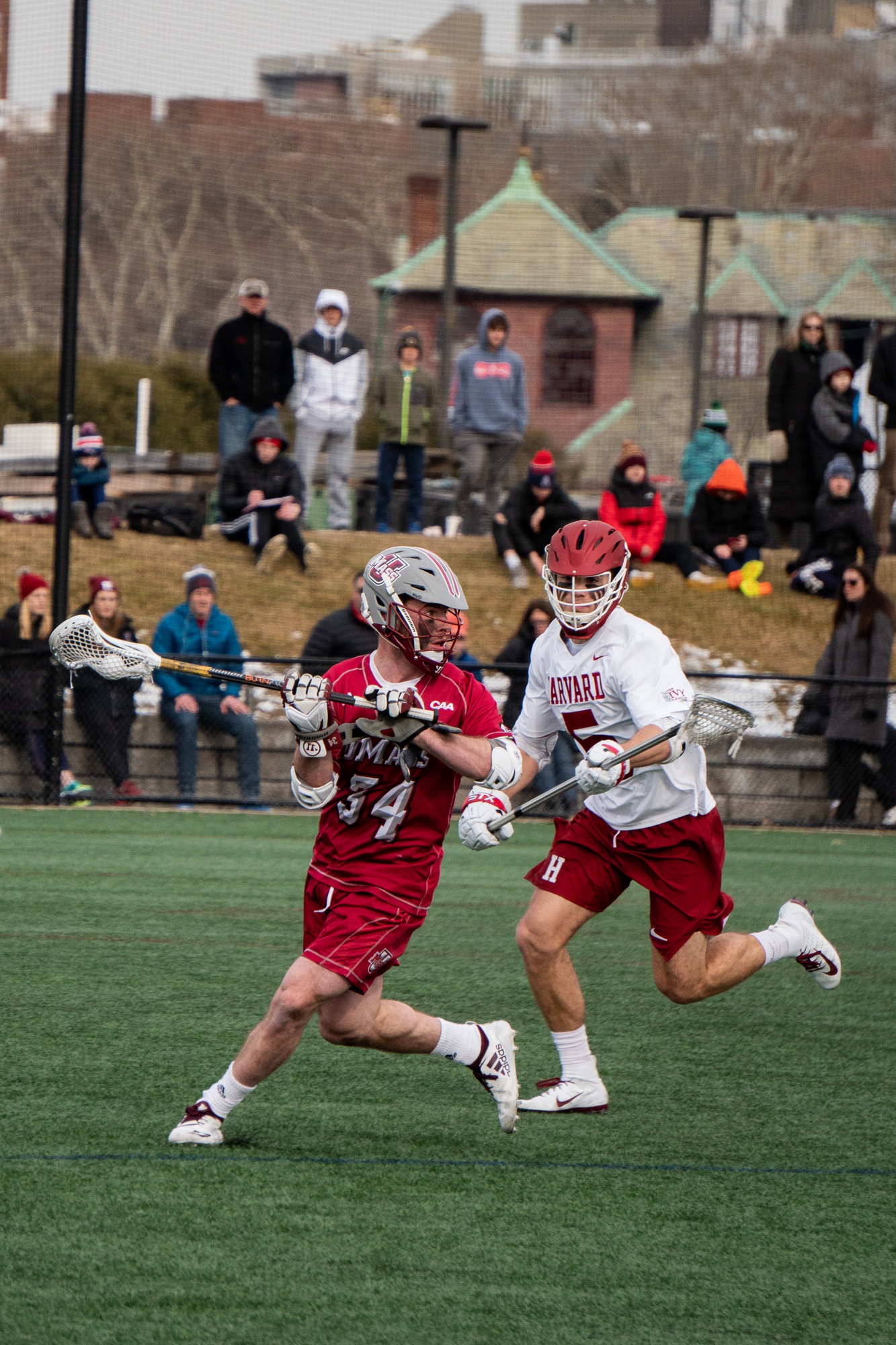 Five ties and two lead changes, but it was one minute and 26 seconds that made all of the difference.

At the end of a back and forth affair, Harvard (0-2, 0-0 Ivy League) fell by a score of 12-9 to UMass (1-2) at Jordan Field on Saturday. The Crimson will now have to wait until its next time out to try to pick up their first win of the season.

A week after a tough loss against the ranked North Carolina Tar Heels, the Crimson came into its second game ready to take on its in-state rival, the University of Massachusetts. Despite being 0-2, UMass looked solid in its games, falling in a close 12-11 overtime battle to Army in its season opener, as well as in an 11-7 defeat at the hands of No. 13 Ohio State. With both teams chomping at the bit to prove themselves and pick up their first win of the 2019 season, the stage was set for Harvard’s home opener to be an intense battle.

Neither the chilly 40 ˚F temperature nor the early 1:00 pm faceoff deterred fans from attending the big game. In addition to the ticket line that stretched all the way back to Harvard Stadium, the entire bleachers were full and the range of standing spectators spanned across the entire East end of the field. Finally, with both teams warmed up, the game got underway, and would not disappoint.

The Crimson pushed the tempo early, as the team launched four shots within the opening minutes of the game. Finally, Harvard was able to break through when sophomore defenseman Frankie Tangredi scored off of a UMass turnover. Despite the quick start by the Crimson, UMass remained unfazed, and two minutes later, sophomore attackman Chris Connolly netted a tying goal. With the game back to being even, each side stepped up the aggressiveness in an attempt to go out ahead.

After UMass junior midfielder Charlie O’Brien was penalized for holding, Harvard was given the edge and made sure to take advantage. 25 seconds into the 30-second penalty, reigning Ivy League Rookie of the Week Austin Madronic, an attackman for the Crimson, stormed through to net his fourth goal of the season. With the momentum back with Harvard, the team continued to force the pressure, and by the time the buzzer sounded that signaled the end of the first quarter, junior midfielder Nigel Andrews and junior attackman Kyle Anderson each added a goal to give the Crimson a 4-1 lead.

At the start of the second quarter, many of the 1,233 fans in attendance were still pouring into the stadium. UMass was determined not to give in, and, after winning the opening faceoff, the team marched downfield and launched shot after shot. Great physical defense by senior defenseman Jonathan Butler, combined with excellent goalkeeping from sophomore Kyle Mullin, allowed the Crimson to hold off the initial attacks.

However, UMass remained relentless, and soon enough, Conolly led a quick counter-attack and put one through for UMass. In the following five minutes, UMass launched six shots, all of which Mullin was able to save. Although senior defenseman Issac Paparo and junior midfielder Jeff Trainor led a majority of the UMass attack, it was sophomore midfielder Kevin Tobin that ripped a deep shot that nearly got by Mullin to make it a one-goal game halfway through the second quarter.

After a goal from Trainor shortly after, UMass found itself in a tie game, but appeared to change up its playing style. In a surprising move, the team switched off its fast-paced play and tried to slow the game down in an attempt to gain the lead. However, the tactic did not work out, and on a quick turnaround, freshman defenceman Chase Strupp set up Madronic for a much-needed goal that gave Harvard the lead. Harvard was still unable to break away, as, after a continual back-and-forth battle in which each team netted another goal, UMass found itself down only 6-5 at halftime.

UMass looked to up the pressure at the beginning of the second half, yet Mullin continued his stellar play and fended off shots by Trainor and freshman attackman Scott Del Zotto. After the game, Butler had high praise for Mullin, saying “Kyle Mullin was great for us in goal again, but we can’t rely on him to continue making big saves for us.” The rest of the team would have to step up.

Five minutes into the third, a cutting Madronic attempted a behind-the-head shot that UMass senior goalie Sean Sconone was barely able to knock away for one of his 13 saves on the day. Although momentum seemed to be building with Harvard once again, UMass quickly turned things around, and, after a beautiful minute-long penalty kill in which Harvard could not get a shot off, freshman midfielder Gabriel Procyk stormed down the field and re-tied the game.

During an offensive possession, a pass from junior attackman Ryan Graff flew just above the stick of Anderson, who turned into an absolutely brutal hit by Paparo. Madronic, taking exception to a cheap hit on his teammate, flew over to have some words in the face of Paparo, which caused the teams to have a little skirmish on the UMass end of the field. Although it took several minutes for the referees to sort things out, the play resulted in Madronic, as well as two UMass players, each receiving a minute long penalty.

35 seconds into the penalty kill, Anderson got his revenge, and off an assist from sophomore attackman Myles Hamm, scored the go-ahead goal for Harvard. Unfortunately, this was not enough to break the pattern of the game, as once again, UMass was able to strike back. This time, it was Trainor who fought his way in from the left wing to tie it up. Both teams fought to try to gain an advantage in the final minute of the third, but as the quarter came to a close, the score remained 7-7.

The game was set for a dramatic finish that would come down to the wire. Fans from each side were cheering as loud as they could for their teams, each trying to outdo the other. Tensions ran high and could be felt through the air as the players made their way back onto the field, preparing for the battle that would determine the final result.

It did not take long for the action to pick up right where it had left off. Seven seconds into the quarter, Paparo picked up a two-minute unnecessary roughness penalty for a hit on Cuccurullo as the two fought for the faceoff. Harvard, smelling blood, knew it had to capitalize during this time. 40 seconds into the penalty kill, Graff found Hamm who ripped a go-ahead goal for the Crimson. However, with 11:27 left in the game, Paparo got out on a breakaway and beat Mullin to the top left corner, tying the game for a fifth time.

Harvard continued to push and hold off counter attacks, looking for any attempt that would allow for some breathing room. However, a momentary lack of focus resulted in a major disadvantage for the Crimson. UMass had not led for a single second of the game, but in a span of one minute and 26 seconds, Del Zotto and Connolly scored three goals. With 5:30 left, Harvard now found itself down by three goals. The turnaround was incredibly quick and left the Crimson fans in a stunned silence.

Harvard fought until the bitter end, but it simply was not enough to overcome the three-goal deficit. Hamm was able to notch one more goal for the Crimson, but a late, open-goal score by UMass with 17 seconds left, put the game away for good.

“That was a tough one to lose because of the rivalry we’ve developed over the years against UMass, but the good news is we have another game at Holy Cross on Tuesday and we’re hoping to start taking our season in the right direction,” Anderson said.

Although the final score was 12-9, the game felt far closer throughout its entirety. Despite the hard loss, the team is keeping its head up and focusing on rebounding for a great year.

“I thought we played really hard through the first three quarters and just didn’t make some key plays in the fourth quarter” Butler said. “We still feel very confident in our team’s ability to execute better in our next couple of games against Holy Cross and Hartford.”