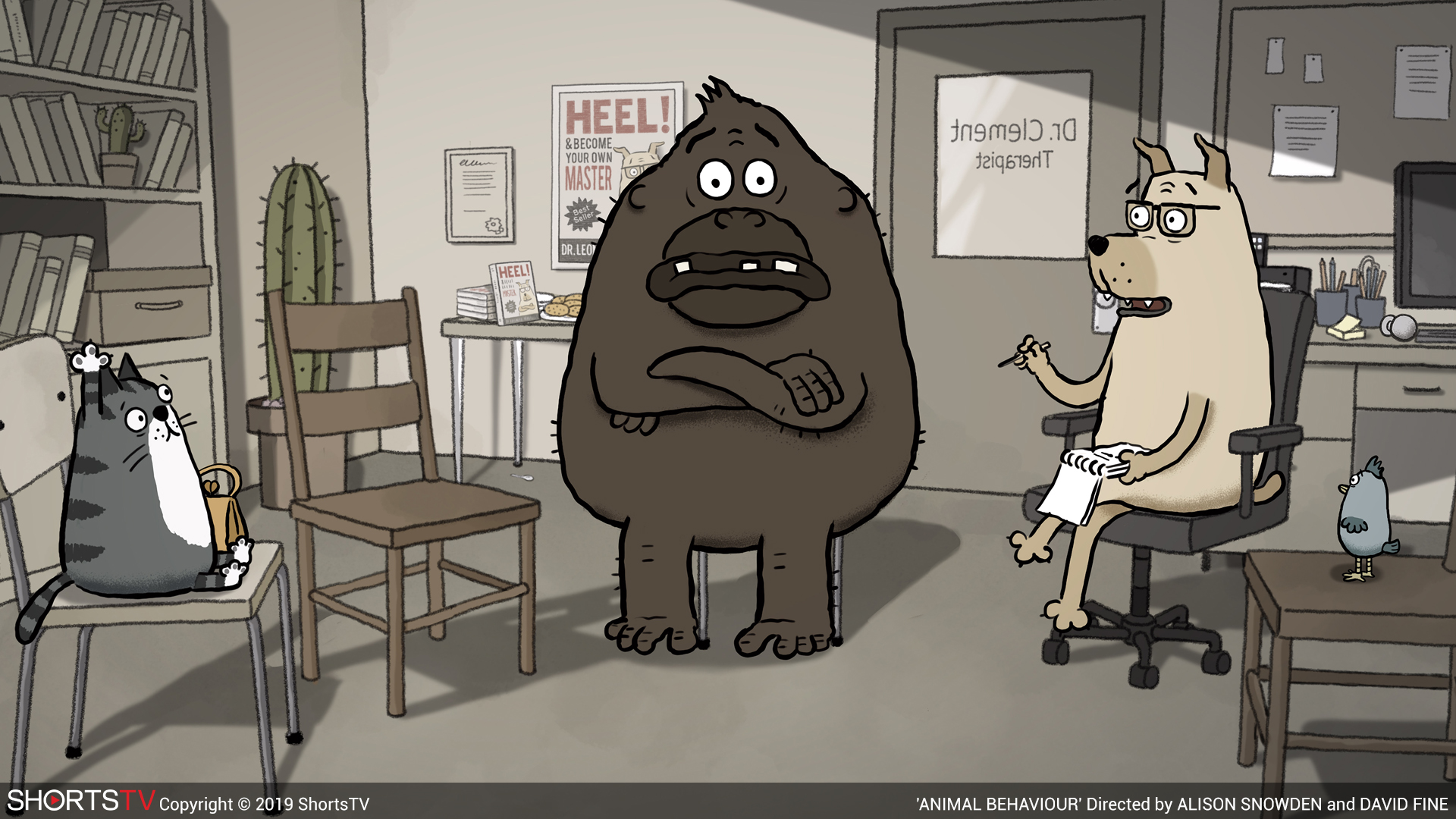 When the credits roll on Oscar Sunday and this year’s many controversial races are laid to rest, no one will remember who won the Academy Award for Best Animated Short Film. And they certainly will not remember the shorts that lost out on the top trophy. That, simply, is nothing less than a shame.

The animated short is both critically and criminally underrated as an art form. Every scene is not only the product of careful storyboarding and months of skilled animation, but must also advance a compelling narrative that has no more than 20 minutes to unfurl itself. Ranging in tone from absurdist allegorical comedy to deeply felt portraits of family and illness, the animated shorts selected by the Academy this year are a true testament to the creative largesse of the medium. Below, this year’s nominees reviewed. 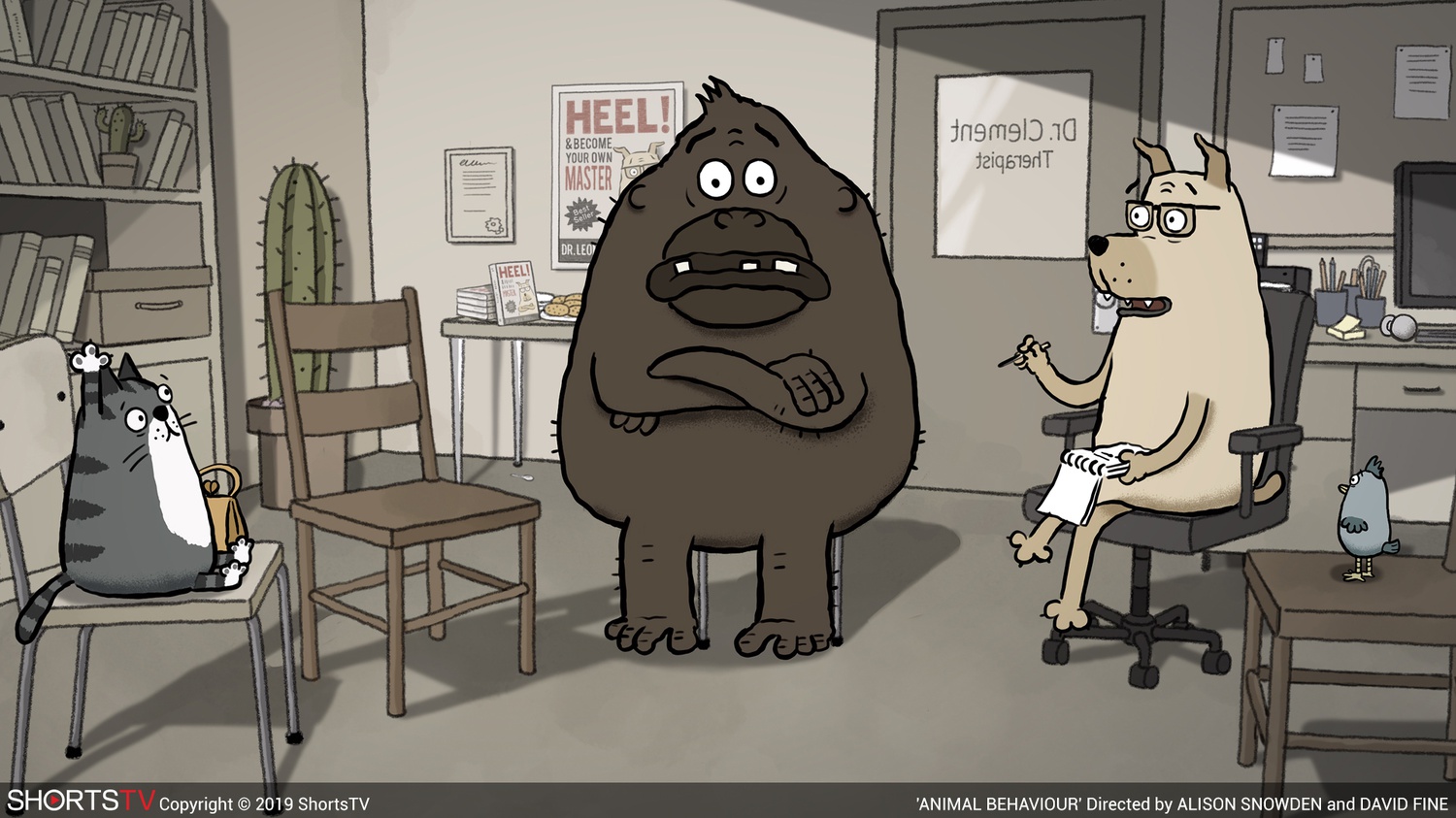 "Animal Behavior" (2018) is an animated, Oscar-nominated short film directed by David Fine and Alison Snowden. By Courtesy of the Academy Awards

“You need to stop gazing at your own navels and just get on with your lives,” an ape says to a text-savvy praying mantis, a boy-crazy leech, a dog with a psychology degree, a bird with a traumatic past and a pig, among other animals. “Animal Behaviour” takes the absurdities of modern human behavior and manifests them in their logical extremes, as character traits of various animals that gather together for a group therapy session. Lorraine the leech has attachment issues, Victor the ape can’t manage his anger, and Jeffrey the bird has nightmares of pushing his little brother out of the nest to his death. The animal stand-ins for human behavior certainly aren’t subtle, but are delightful nonetheless.

Snowden and Fine utilize a muted, familiar animation style, one that evokes the Nickelodeon comics of yesteryear, which adds to the scenes a harsh realism that juxtaposes wonderfully with the antics unfolding on screen. Notably, the short relies heavily on an actual script to advance its concept and develop its characters; none of the other entries in this category come close to this level of hyperactive dialogue, and many have no dialogue at all. But of course, only “Animal Behaviour” has a talking praying mantis. A group of Vancouver-based actors turns in fantastic voice performances — Ryan Beil as the mostly calm, canine psychotherapist is a standout.

The film climaxes in a literal dogfight, as a conventional shrink’s office becomes the animal kingdom writ small. This hilarious twist, though a bit heavy-handed, packs a startling punch. The audience remembers, perhaps with a jolt of discomfort, that they were in the animal kingdom all along. 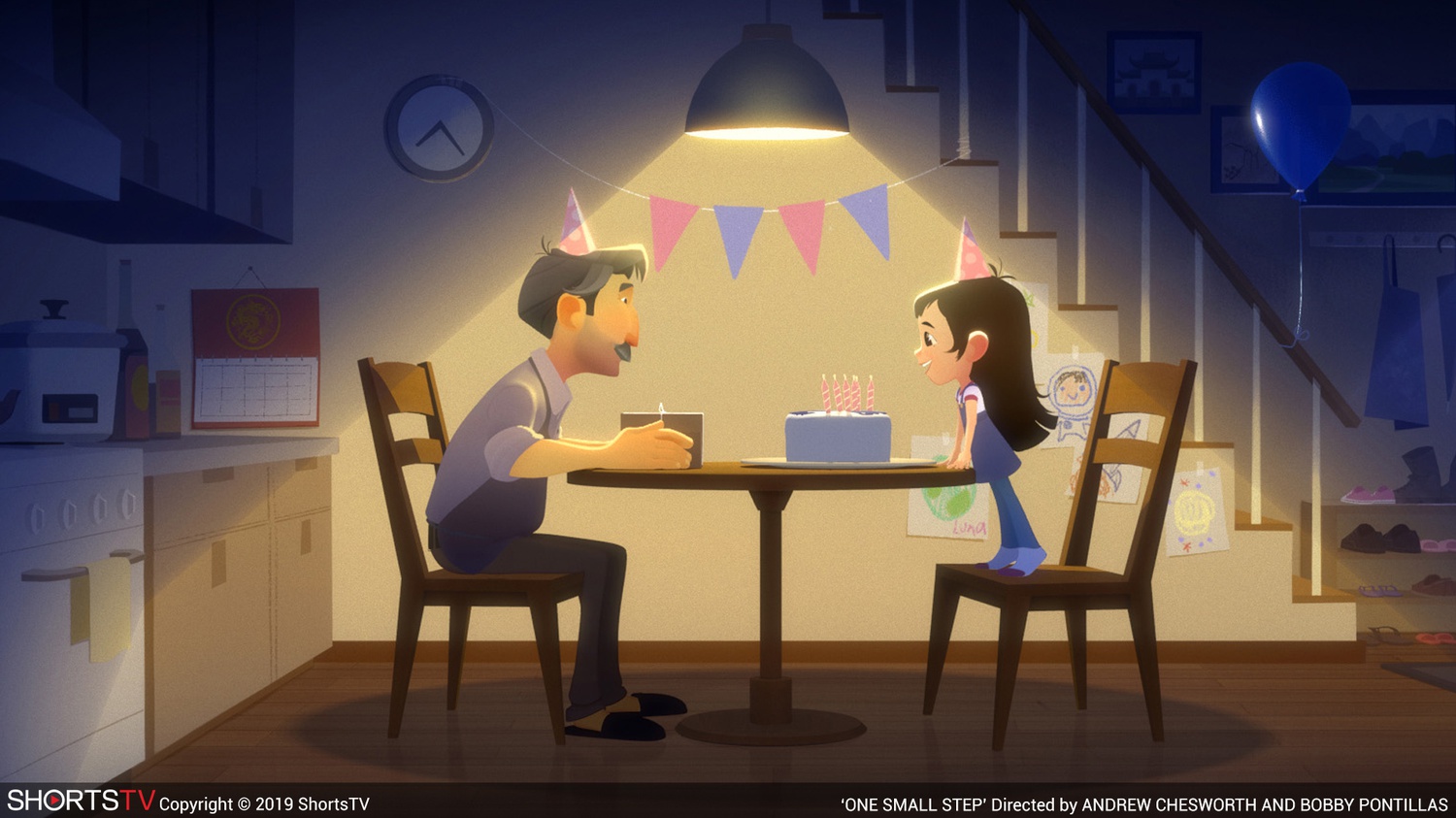 "One Small Step" (2018) is an animated, Oscar-nominated short film directed by Andrew Chesworth and Bobby Pontillas. By Courtesy of the Academy Awards

Every little kid dreams of going to space one day, but not as fiercely as Luna Chu, the young girl around whom “One Small Step” revolves. Luna wears moon boots and decorates her room with stars and spaceships. Her father, a loving single parent, supports her dreams, and the two whiz around the house pretending to be astronauts. But, as seems to be a theme in many of these family-oriented shorts, the trials and tribulations of high school and adolescence test the bonds between Luna and her father. The film doesn’t shy away from tragedy in its precious few minutes. But the ending, literally uplifting, resolves Luna’s turmoil in a rich, gorgeously rendered sequence.

The eight-minute film covers at least two decades of Luna’s life, from when she is a young, idealistic dreamer to when she gets the chance to make those dreams come true. For this task, the filmmakers return to a couple of memorable visual motifs that they thread throughout the story. The strongest is a seemingly real sky of stars and moons that are actually Calder-esque pieces hanging from the ceiling, as Luna and her father zip past the objects in their cardboard spaceship like skiers hitting the gates of a slalom course. In this way, “One Small Step” can serve as a textbook example of consolidated storytelling. Every shot, every visual motif, and every pair of shoes that Luna wears has meaning. The film does suffer from predictability — this father-daughter tale is poignant, but not groundbreaking. Accordingly, its ambitious animation occasionally masks some moments of thinness in the story itself. Nevertheless, “One Small Step” is a thoughtful take on a father’s love, a girl’s aspirations, and how the two transcend space and time to care for each other. 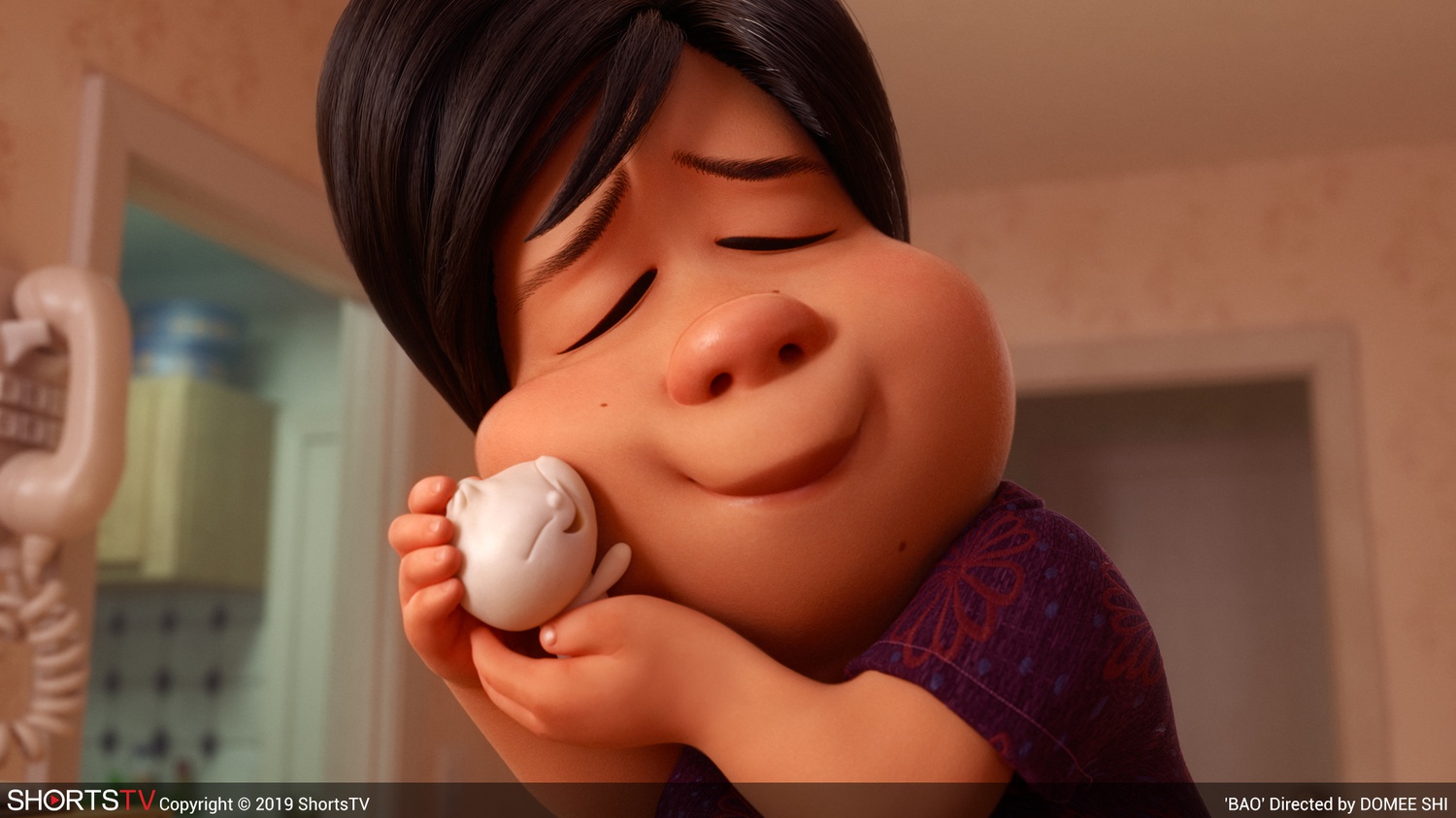 "Bao" (2018) is an animated, Oscar-nominated short film directed by Domee Shi. By Courtesy of the Academy Awards

“Bao” might have the distinct honor of being the most-viewed Oscar-nominated short film of all time. Pixar’s decision to run “Bao” before every screening of its smash hit “The Incredibles 2” certainly gives the humble baozi dumpling a leg up in terms of popularity. However, “Bao” stands strong all on its own, and is compelling and quietly radical, without any dialogue, as a big-budget portrait of a Chinese-Canadian family.

Rendered in the classic Pixar animation style that has spawned millions of devoted fans and billions of dollars, “Bao” tells the story of a mother who copes with an empty nest by adopting an anthropomorphized homemade bao as her charge. The scenes of the young bao growing up are gorgeously detailed, from the toothbrush that the mother uses to lovingly clean her young bao, to the sweet buns she buys him for a snack, to the punk rock posters that appear on his door during his angsty adolescent years.

Within a few short minutes, the two grow apart, as teenagers and well-meaning parents are wont to do. A short with a plot twist is not rare, but this one is especially good, so no spoilers are forthcoming. All that’s left to say is that “Bao” is a heart wrenching, uplifting, seven-minute story of motherhood, adolescence, family, and delicious food. 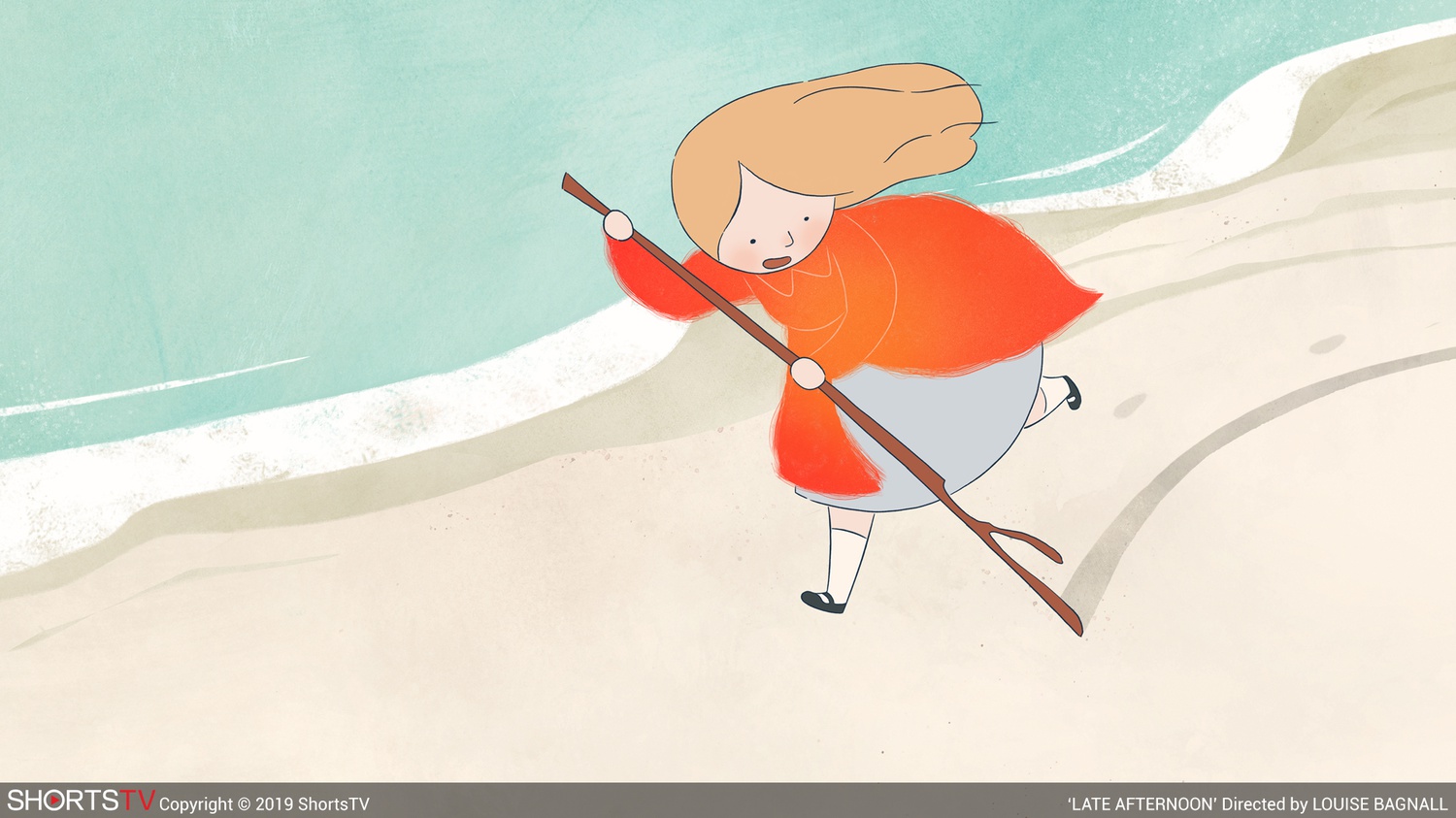 "Late Afternoon" (2018) is an animated, Oscar-nominated short film directed by Louise Bagnall. By Courtesy of the Academy Awards
Advertisement

The year’s most devastating tale of aging and illness comes by way of a minimalist animated short from Ireland. “Late Afternoon” tells a gentle story of Emily, an elderly woman deep in the throes of dementia. A biscuit falling into the abyss of a teacup sends her on an aching mental whirlwind of her life. These scenes of a young and curious Emily are so joyful that the audience might lose itself in the memories, just as she does. The pain is that much sharper, then, when Emily returns to the present and does not remember her caretaker.

The stunning artistry of the animation sets this short apart. “Late Afternoon” looks like a watercolor painting come to life, with fractals of muted color swirling across the screen as the film catapults through time. The character’s faces are sparsely sketched, but with such careful detail that somehow two dots for eyes and a line for a mouth can convey the barely perceptible sadness of Emily’s caretaker as she watches her charge decline. The stunning score is both melancholy and uplifting. And the final moments, between a mother and daughter, are more emotionally affecting than many a skilled actor could ever muster in person. “Late Afternoon” is an absolute must-see. 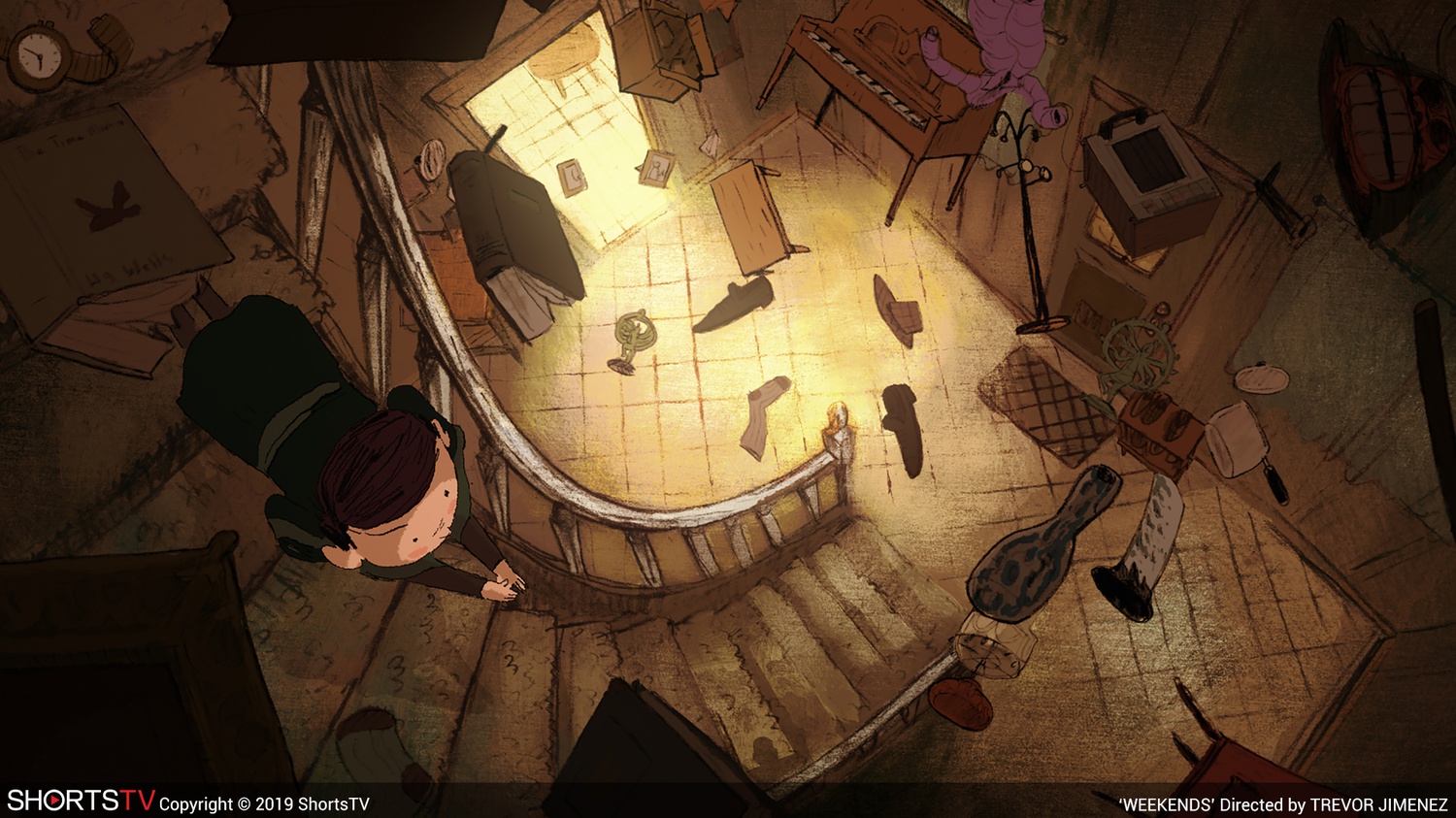 "Weekends" (2017) is an animated, Oscar-nominated short film directed by Trevor Jimenez. By Courtesy of the Academy Awards

The notable weekends in this short film are the days in which a young boy with divorced parents gets to see his father. The lovely simplicity of the film’s premise — following its protagonist as he passes from his mother’s house to his father’s house, and back again — is so richly detailed and symbolically evocative that the base narrative ultimately transcends simple description into something much more powerful and ineffable.

In “Weekends,” the characters’ personal spaces speak volumes about their personalities — the effortlessly cool father’s dark, urban bachelor pad in downtown Toronto is decorated with samurai swords, while the warm yet distracted mother’s suburban country rooms are filled with light, but littered with boxes and loose papers. A spatial sketch of the film, perhaps, would allow for the the most apt analysis of the character’s interiorities; it would include the lush tree that changes with the seasons outside of his mother’s house which the boy passes on his way to and from his father’s car every Friday and Sunday. Indeed, “Weekends” is told in geography, through a sumptuous, often surreal mapping of the quiet ties that bind a divided tripartite family. The world surrounding this child of divorce is more hopeful than that of, say, “The Squid and the Whale,” but less saccharine than in “The Parent Trap.” The world of “Weekends” is literally simple — two-dimensional, and anchored by just two spaces — yet poignant, with both the pain and promise of having separated parents etched lovingly into every careful shot.

Jimenez’s animation style, a bit like Claymation but with elegant drawings, lends a slow, hazy feel to each scene. As the film goes on, and the compact unit of two divorced parents and one son starts to expand, Jimenez amplifies its young protagonist’s growing sadness with increasingly dreamlike, escapist visuals. But it is the stunning, almost trippy final shot, full of love and wistfulness, that will stay with you for a while. Animation is rarely so painterly.