Ghungroo 2019 on the ABC’s: The American-Born Confused Desi Experience 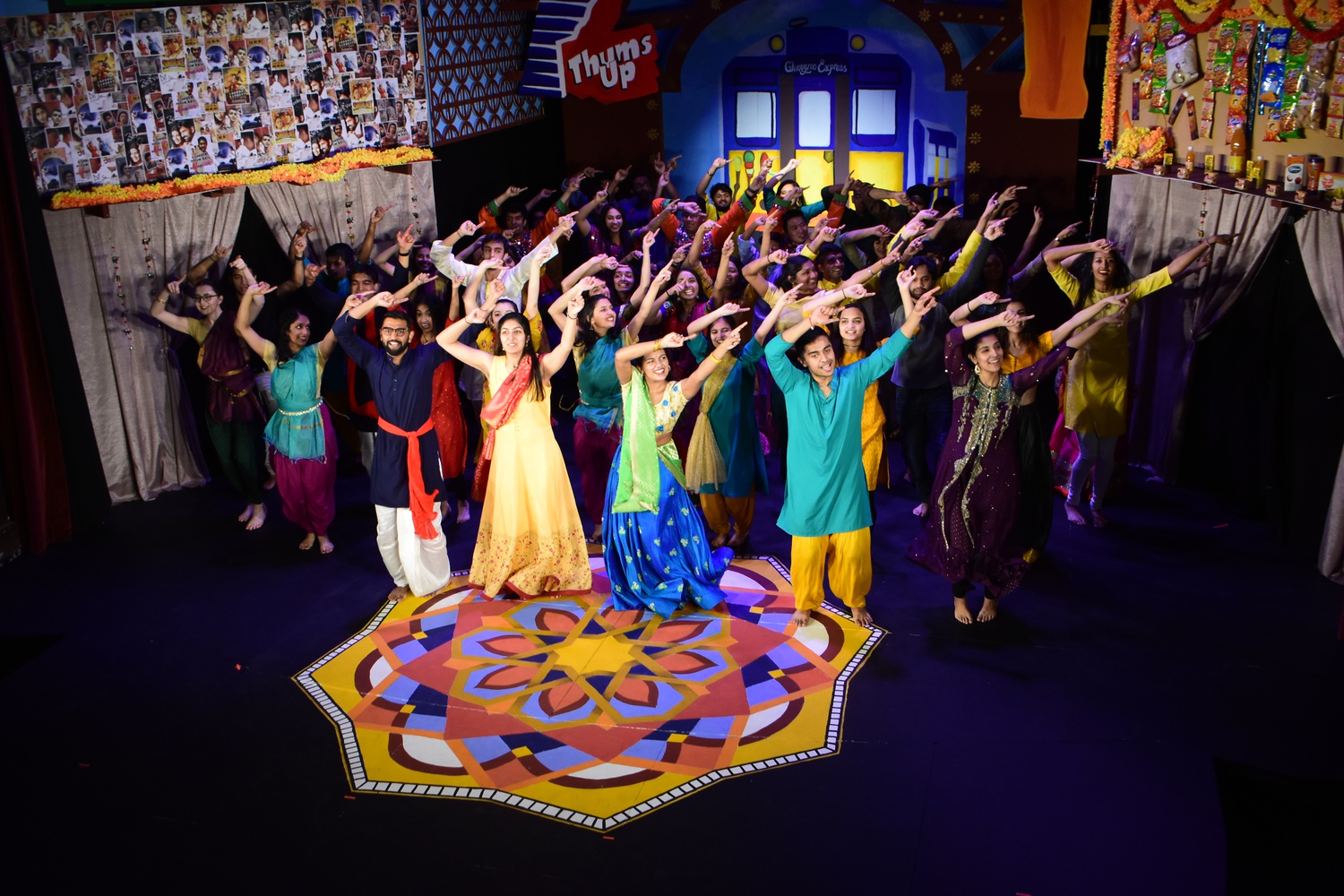 Ghungroo 2019 began with a staticky announcement, as if over an intercom: “Welcome aboard the Ghungroo Express!” Directed by Apurva Kanneganti ’20, Suruchi A. Ramanujan ’20, and Sumhith V. Aradhyula ’20, and produced by Raahul A. Acharya ’20 and Rameen A. Rana ’20, this year’s Ghungroo show transformed the Agassiz Theater stage into a spectacularly vibrant train station. Bright colors and a visually busy set, filled with multi-hued signs for station vendors, filled the air with a bustling, palpable excitement. Every year, Ghungroo, presented by the Harvard South Asian Association, interrogates what it means to be a South Asian American. But this year’s show in particular, which ran Feb. 28 through Mar. 2, was dedicated to the heart of this transpacific experience: diaspora. A train station, both a transitory locus and a site of collision of diverse peoples and cultures, indeed seems a most fitting symbol that — like Ghungroo as a whole this year — cut to the crux of the South Asian American experience.

The show was comprised of a series of musical and dance performances interspersed with independent narrative fragments. The nine skit scenes functioned as standalone comedic acts, yet were inextricably connected: All were humorous explorations of the cultural anxieties and uncertainties of a diasporic Desi experience. The music and dance acts explored this topic as well, examining its central tensions and representing its intense pride and joy. The scenes came together to form an undeniably and uniquely South Asian American production.

Ghungroo’s skit scripts, written by Ajay V. Singh ’21, Dhruv Gupta ’20, Fariba Mahmud ’22, Gaurang Goel ’22, Gopal K. Vashishtha ’19, and Juhee Goyal ’22 were deeply sociopolitically aware at their core. The themes ranged from an exploration of ethnic distance as a result of the generational, geographical, and cultural estrangement of diaspora to humorous criticisms of patriarchal and heteronormative expectations. One skit poked fun at the tired diversity signaling of Harvard administration. An actor playing Dean Khurana, about to attend Priyanka Chopra’s wedding, announced, “It’s gonna be a melting pot of all these cultures and people. It’s gonna be a transformative experience!” Also included was a roast of Mankiw’s spotty attendance record at his own class as well as a parody of Kendall Jenner’s horrifically politically insensitive Pepsi ad. Another skit was an (deservedly) scathing and hilarious criticism of interactions between white teachers and brown students: The scene opened with the character of a white teacher exclaiming, “I’m so excited to teach such an exotic class!” and atrociously butchering the names of South Asian American students while taking attendance. Each skit, with brutal honesty, managed to be unrelentingly funny without needing to filter some of the less pretty baggage that comes with being a diasporic Desi in America, such as the not-so-ideal racism of white teachers.

The dance and musical acts were no less spectacular. The funky “Fusion” dance number, for instance, synthesized Western and South Asian influences into a South Asian American production that its choreographers Adriana Rotaru ’21, Priya P. Kukreja ’21, and Sruthi Palaniappan ’20 likened to ‘Chicken Tikka Masala’ in the program description. From “Fusion” to the “Classical” dance performance of Bharatanatyam, Ghungroo was truly a distinctly South Asian American project. Particularly skillful was the “Percussion Ensemble” of Act 2, performed by Aditya Mahadevan ’20, Akshay Swaminathan ’19, Keshav M. Rastogi ’21, and Nikita Jindal ’22, described in the program as a “unique fusion of instruments from South Asia with Western cajon” and a “conversation of beats to bridge continents.” Each musical and dance performance was an intimate conversation between the two sides of the hyphenated Desi-American identity and coalesced brilliantly into a fully South Asian and fully American, fully South Asian American performance.

Just as the celebration of and pride in South Asian American identity was palpable in the performances, the set was also lovingly built. The cheerful, vibrant wall-mounted decorations crowded against each other, as if vying for the attention of the audience. The stage floor featured a painstakingly-painted geometric mandala design, and a painting of the front of a steam engine formed the backdrop for the set. Colors were beautifully complementary. Costume directors Anagha B. Kumar ’22, Setu Mehta ’21, Sonya Kalara ’21 and Sreya R. Sudireddy ’21 and lighting designers Aditya Mahadevan ’20 and Leena A. Ambady ’20 coordinated color themes of costumes and lighting to create harmonious visuals.

A high energy, captivating production, Ghungroo calcified the ABC’s of the South Asian American experience: “the American-Born Confused Desi” experience, a phrase that has made its way into popular vocabulary and into the Ghungroo program description of the “Fusion” dance. But the show came together with such cohesion and striking beauty that, despite the puzzling paradoxes of the diasporic experience, this Desi production, at least, did not seem confused about the joy, pride, and singularity of a South Asian American subjectivity.