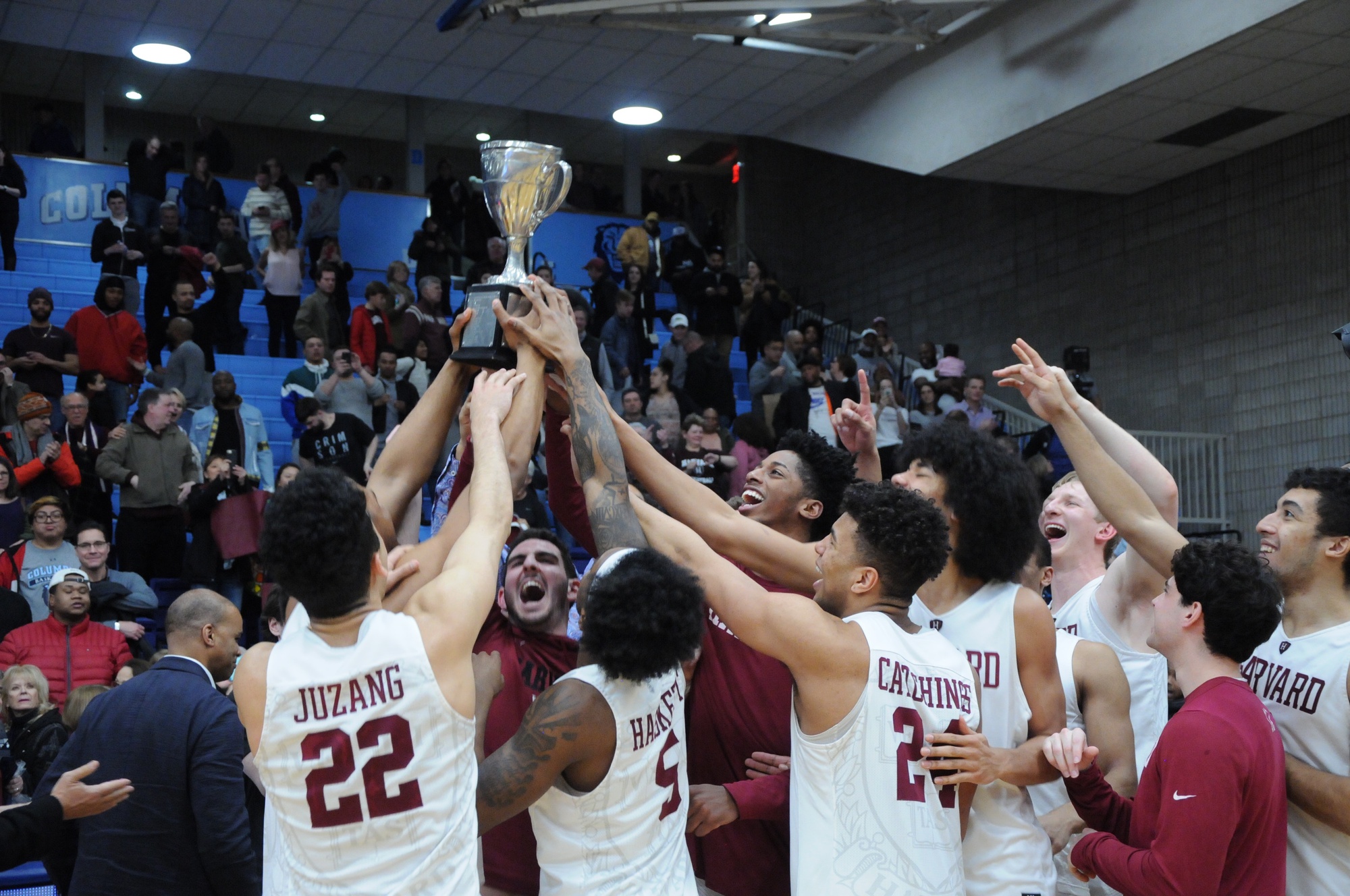 The Crimson had already played through 20 minutes of extra time this conference season, 15 of those which came against the Columbia Lions in the Feb. 8 triple-overtime classic. Adding five more minutes to the regular season finale only seemed appropriate to a game featuring 15 ties and 13 lead changes — and a season defined by last-minute nailbiters.

Propelled by the individual scoring prowess of junior guard Bryce Aiken — who drilled six triples in a 36-point showcase — as well as three momentum-shifting dunks by sophomore Danilo Djuricic in overtime, Harvard had all but sealed its place atop the Ancient Eight heading into the final seven seconds of the game. Junior wing Justin Bassey was fouled and swished in both of his free throws, giving Harvard a 83-78 lead.

But as is the case across the Ivy League this season, no lead is ever safe.

Columbia sophomore guard Gabe Stefanini sprinted downcourt and knocked in a desperation three to bring the game within two as 2.7 seconds remained on the clock. But Djuricic’s ensuing inbounds to Aiken was mishandled, gifting the Lions one last chance to spoil the party.

And a good chance Columbia had indeed. In what was senior Quinton Adlesh’s final shot of his college career, the three-point specialist rolled to the left corner and briefly escaped the reach of defender Christian Juzang. But his high-arching triple was a tad too strong, nicking off the back iron as the horn sounded. A well-represented Crimson contingency at Columbia’s Levien Gymnasium could finally exhale and rejoice in the victory.

“I’m at a loss of words for what these guys have been able to do to make it happen, after a loss last night [to Cornell] that we were so disappointed in,” Amaker said. “But now to be able to do it, to say we are Ivy League champions again, back-to-back. We’re really proud of what these kids have done.” 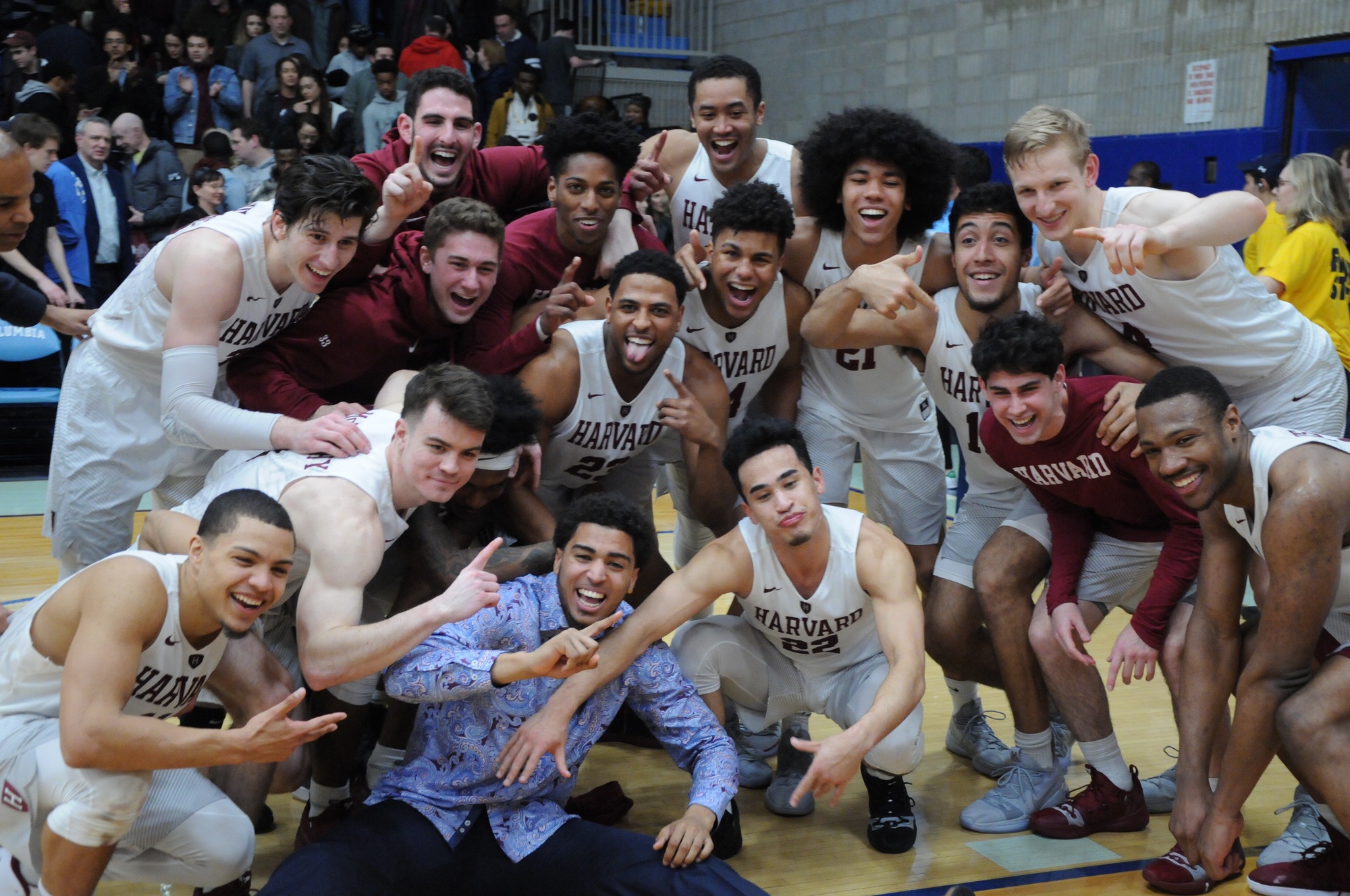 Saturday’s win, beyond placing the Crimson at the No. 1 seed in the four-team Ivy tournament and booking a meeting with Penn in the semifinals, also preserved Coach Tommy Amaker’s regular-season-title “winning record”. Over the coach’s 12 seasons in Cambridge, Harvard has either shared or won the Ancient Eight crown outright in seven of those campaigns. The one-time Seton Hall and Michigan coach earned his 400th career win last month and was named the all-time winningest coach in Harvard men’s basketball history in 2016.

“I think when I get a chance to start to look and analyze and reflect a little bit, I think we’ll have a better sense of it,” Amaker said. “But I do feel right now that it does have a special meaning. I don’t know exactly what that really means yet, but I just know how this road has been with this team and injuries and different things that we are fighting in the league. It is very competitive and incredibly hard.”

Outside of Aiken’s offensive output on Saturday night, freshmen Noah Kirkwood and Mason Forbes provided a combined 19 points. The latter first-year in particular energized the Crimson offense at the start of the contest, quickly tallying seven points to push Harvard ahead 15-11 in the opening 10 minutes. Forbes had seen just four minutes of game action in the last two contests, but was clearly in demand in order to combat the Lions’ imposing set of bigs including Patrick Tapé, Randy Brumant, and Ike Nweke.

Nweke in particular gave the Crimson some difficulties defensively in the first frame, reciprocating Forbes’ seven points after similarly coming off the bench around the 13-minute mark. The Lions retook the 21-20 lead five minutes later, but the back-and-forth bout would continue.

Before heading to the locker room, the home side threatened with two runs. The Crimson matched the first 8-0 spurt to level the game back at 33, but saw the second swing linger into the latter half, as the home side gained some traction in the final 1:26 with a triple from Adlesh, a Brumant dunk, and a buzzer-beater layup from Tapé who weaved through the Crimson with less than five seconds remaining on the clock.

Columbia built on its seven-point halftime lead, briefly flirting with a double-digit margin in the opening three minutes. But it was the Crimson’s turn — specifically Aiken’s turn — to uplift the languishing offense. The Randolph, N.J., native knocked down two triples and made a astute dish to Forbes who jammed it in for two, narrowing the Lions lead to one-possession within eight-and-a-half minutes to play. The point guard then drained another triple while drawing the foul to put Harvard ahead for the first time in 15 minutes, and saw an additional trey go down two minutes later.

The Lions regained its momentum, embarking on its own 9-0 run that was capped off by a three from junior Jake Killingsworth with four minutes to play. The scoreboard read 65-59 at that point, but much like the second overtime in the two teams’ prior meeting, Columbia could not close out a late hot streak.

Aiken attacked the basket three times in the next three possessions, scoring twice and finding Lewis inside once. Down 65-67 still approaching the final 20 seconds, the 36-point man attempted to provide a herculean ending himself with one more triple, but this time was rescued by Kirkwood who grabbed the offensive board and was fouled on the follow-through. The freshman calmly converted on both despite losing a bit of vision in his right eye, sending the contest to overtime as Adlesh could not convert on the final triple attempt.

“Bryce had been telling me to dunk the ball since the last couple of minutes and heading into overtime,” commented Djuricic on his aggressiveness late around the rim. “So that was my mentality, to go up there and go up strong and that’s it.”

Lewis’ two made free throws heading into the final 1:47 gave the Crimson a deceptively-comfortable three-point lead, but the Lions gave one last push with an Adlesh three and two free throws from Maka Ellis with 58 seconds remaining. Down two, it was the corner shooting accuracy of Juzang this time that put the Crimson back ahead by one. Harvard held on tight at the end, but not before those scary last few seconds.

“You just got to stay resilient and rebound and that’s what we did today,” Aiken said. “It was a testament of our character and our team spirit and we buckled down and we got the job done on a tough road gym.” 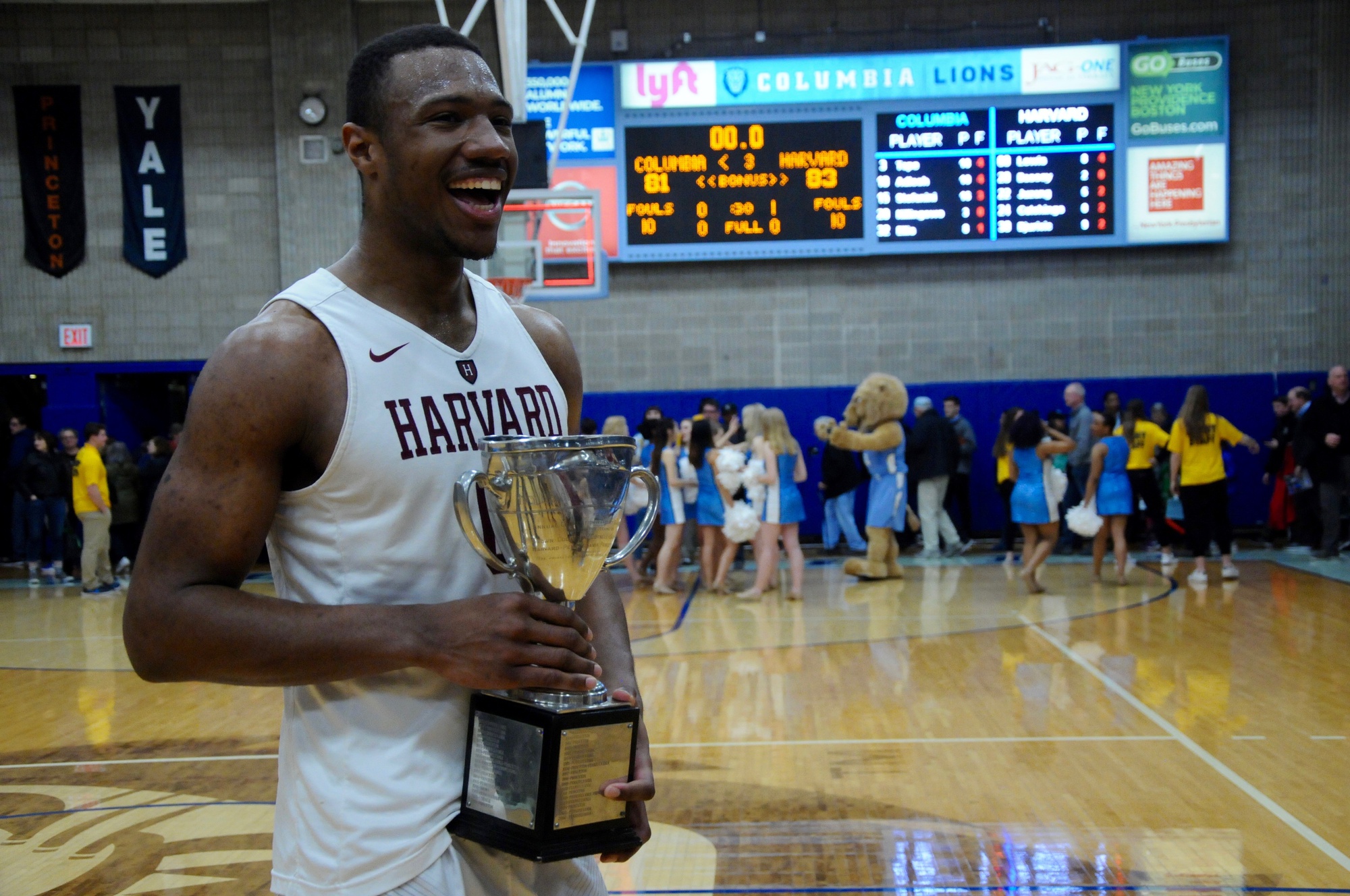 Junior big Chris Lewis was all smiles as he held the championship trophy. By Henry Zhu

As the program will slowly process the significance of this win and title, there are more immediate priorities as the team gears up to play the surging Quakers, coming of a win-or-go-home victory over Brown to secure the No. 4 seed. Harvard has swept Penn in the season series, with both games decided within three possessions including an overtime battle.

“We are just coming together at the right time,” Aiken said. “It's a total team effort, 1 to 20, and we just need to buckle down, play defense, get stops, we just grind wins out. It’s March now so it's elimination, win-or-go-home. So whichever way you get the wins we will take it.”