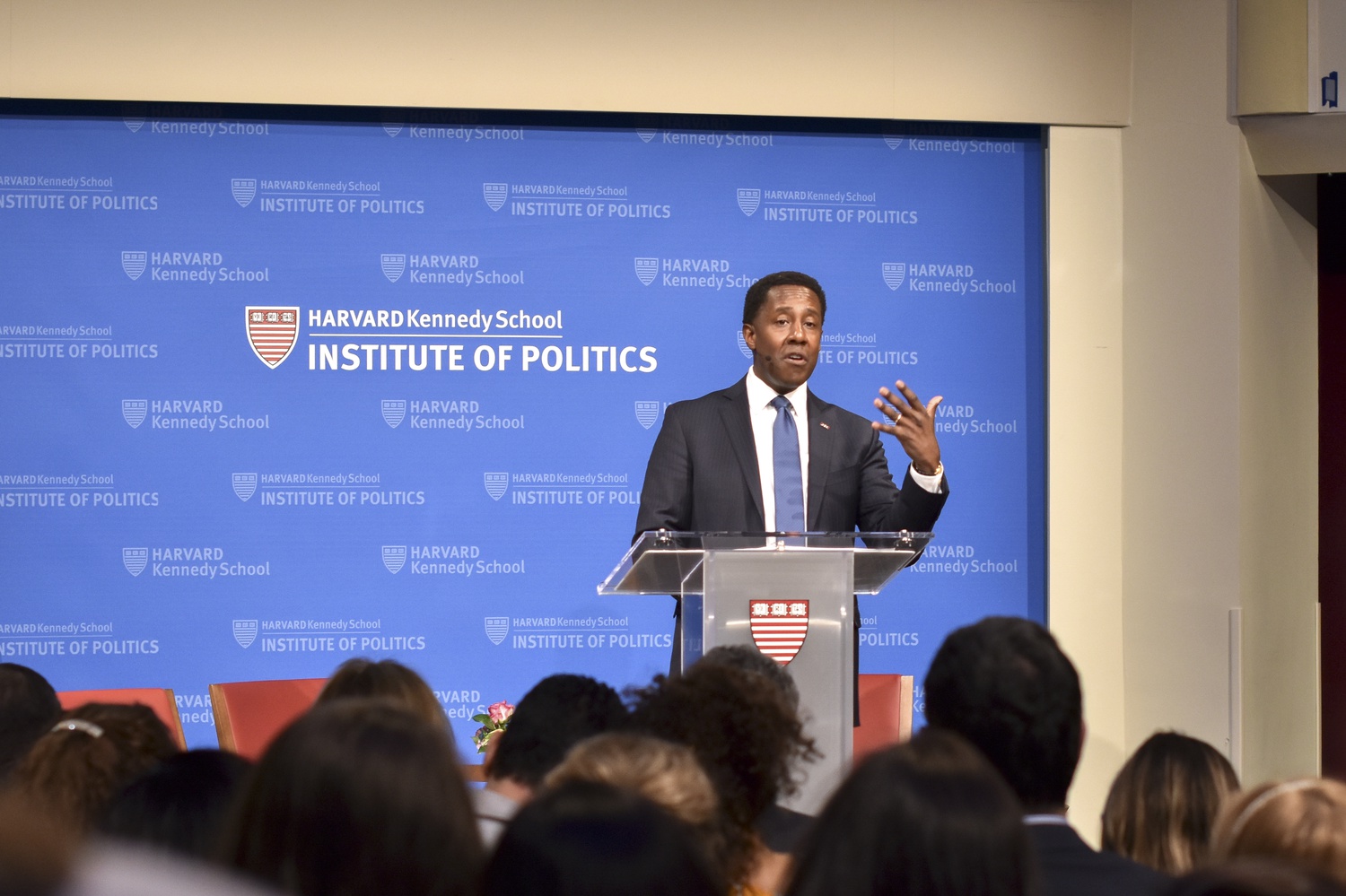 Setti Warren, executive director of the Shorenstein Center, presents nominees at the Goldsmith Awards Ceremony Tuesday. Each nominee received a round of applause for their reporting achievements. By Quinn G. Perini
By Jania J. Tumey, Crimson Staff Writer

Martin Baron, executive editor of the Washington Post, received the Goldsmith Career Award for Excellence in Journalism at the Harvard Institute of Politics Tuesday.

Baron oversaw the Post’s 2014 reporting that revealed the National Security Administration was conducting widespread secret surveillance of civilians. Before joining the newspaper in 2012, Baron served as executive editor of the Boston Globe. The Globe’s 2003 coverage of clergy sex abuse in the Catholic Church, which he supervised, earned the paper the Goldsmith Prize for Investigative Reporting and the Pulitzer Prize for Public Service.

The Goldsmith Career Award “recognizes an individual who has a profound impact on the media and the nation through their commitment to journalism at its highest forms,” Shorenstein Center Executive Director Setti Warren said during Tuesday’s event.

“It’s no understatement to say that Marty’s work, his mission to champion and safeguard free expression, and his unwavering pursuit of the truth have directly improved the lives of millions of people around the world,” Shorenstein Center Director Nicco Mele said.

After receiving his award, Baron spoke about the challenges of building trust in the media at a time when President Donald Trump has leveled criticisms of “fake news” against some media outlets.

“I do think there’s an effort these days not to portray your opponent strictly as an opponent, but actually as an enemy,” Baron said. “I think that’s the way some people view us.”

“What we would like to be, certainly at the Washington Post, is to be independent — to be activists only in service of finding out the facts, and finding out the truth,” he added.

“D’ashon’s story is one of many cases that Dallas Morning News reporters found of giant healthcare companies contracted by the state of Texas systematically denying life-saving drugs and treatments to the state’s most vulnerable citizens,” Warren said. “McSwane and Chavez shone a light on a deeply broken system.”

Other finalists for the Goldsmith Prize for Investigative Reporting included a team from ProPublica that reported on the separation of families at the United States-Mexico border and a group of Wall Street Journal reporters who covered White House hush-money deals.

“The journalists who reported these seven finalist stories are the true unsung heroes of our country,” Warren said.

The authors of three books also received the Goldsmith Book Prize — which recognizes academic and trade books that improve democratic governance — during Tuesday’s event. Matthew Hindman, author of “The Internet Trap,” and Margaret E. Roberts, author of “Censored: Distraction and Diversion Inside China’s Great Firewall” were presented with awards in the academic category. Harvard Government Professors Steven R. Levitsky and Daniel Ziblatt won the trade press category with their book “How Democracies Die.”