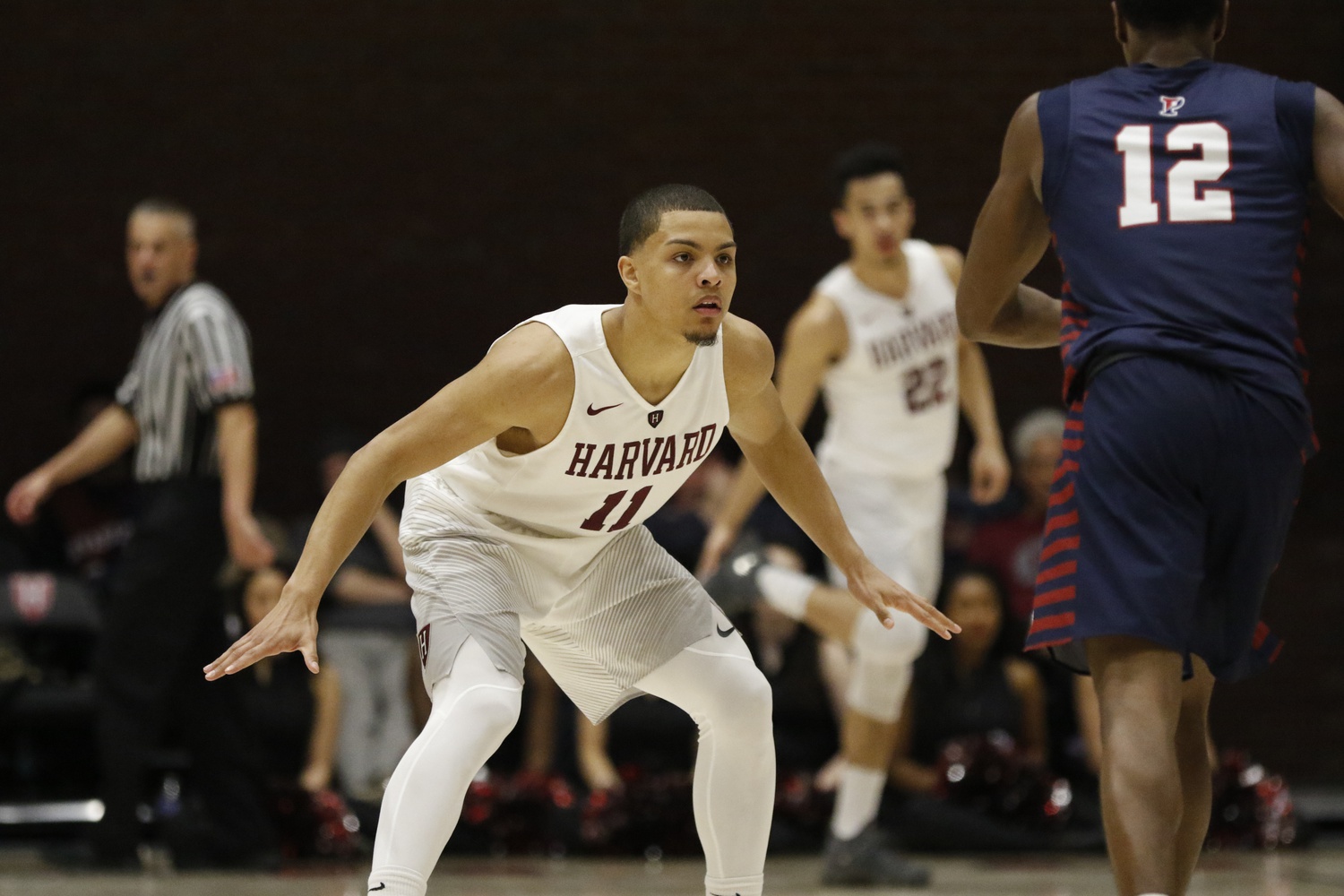 Bryce Aiken has averaged over 22 points per game against Penn, Princeton, and Yale this conference season. By Timothy R. O'Meara
By Henry Zhu, Crimson Staff Writer

As many students prepare to depart campus for spring break — relishing in communal pride with Housing Day still fresh on their minds — the Harvard men’s basketball team will have its season on the line this weekend.

A mere 130 miles south of Cambridge, John J. Lee Amphitheater in New Haven, Conn., hosts this year’s rendition of Ivy Madness — the third-ever win-or-go-home tournament in Ancient Eight history. The Crimson play No. 4-seeded Penn at 12:30 ET on ESPNU, with the winner challenging middle-ranked Yale or Princeton on Selection Sunday at noon on ESPN2.

Harvard fought through three overtime nail-biters and four other conference bouts decided by six points or less to claim its seventh Ivy League regular-season title, clinching the No.1 seed in the four-team tourney. First-team All-Ivy guard Bryce Aiken solidified his return back to dominance after missing the hardwood for almost a full calendar year, pacing the Ivy League in conference scoring at 22.2 points per game over 13 outings. Not to mention the numerous clutch shots he flushed against the likes of Columbia, Penn, Yale, and Columbia again to flip games at risk of L’s into W’s.

The Player of the Year honors, however, went instead to the pride of the Bulldogs — junior wing Miye Oni. The potential NBA draftee has marveled scouts with his versatile playmaking and scoring abilities that have helped him average a third-best 17.4 points per game this season, as well as 6.4 rebounds/game and 3.6 assists/game.

Intra-team sentiment around Lavietes Pavilion obviously leaned toward the man in Crimson (“I thought [Aiken] should have got Player of the Year, but that's just me,” Noah Kirkwood said), but it will be the final products of this weekend that truly matter.

If the Crimson can knock off the Quakers for its third straight win over last season’s Ivy representatives, Harvard will most likely face Yale unless a recently embattled Princeton side can somehow muster an upset.

Amongst all three opponents, Aiken has averaged about 22.8 points per game. Coming off two straight weekends with strong Saturday bounce-back performances, the Randolph, N.J., native can put Harvard in prime position to a tourney berth if he maintains his next-level finishing acuity across two days.

“I thought [Bryce Aiken] had an amazing year,” Amaker said. “We don’t win our league if he’s not anything less than spectacular, and I thought it was that and then some with how he was playing. I was disappointed for him, but we have other good players in our league. Oni was an outstanding player all year as well, so I get it, and I’m biased, but I thought that our guy was outstanding all year for us.”

It has not simply been the Bryce show, however. Ivy League Rookie of the Year Noah Kirkwood broke the Crimson record with seven weekly Rookie of the Week honors, ranking him ahead of previous torch-bearers Siyani Chambers ‘17 and Dan Clemente ‘01. Scoring at a clip of 10.8 points per game in conference play, the first-year Ottawa native has threatened from the perimeter as well as inside with his slashing abilities. Despite his plethora of awards, Kirkwood believed that even more could have been accomplished.

“And if I’m being honest, I felt like I underachieved some of the things I was hoping to do in terms of what my expectations personally were,” Kirkwood said. “...Just getting my assists up or getting guys more involved. I felt I could have done a little better this regular season.”

Although his scoring totals have dropped slightly compared to last season, junior Chris Lewis’ efficiency has continued to hover around the 60 percent mark. Opponents have experimented with the double-team on the Harvard big, forcing kick-outs and some giveaways. But the return of Bryce Aiken has not diminished Lewis’ continued importance inside, especially defensively where the Eliot man is near 2 blocks/game on the season.

With All-Ivy first-teamer AJ Brodeur — who torched the Crimson with 24 points at the Palestra the last go-around — being Lewis’ main defensive responsibility, the Crimson may also need to turn to bench reinforcements to assist in the tall endeavor of limiting the Penn man. Both junior Henry Welsh and freshman Mason Forbes provided relief against Columbia’s Patrick Tapé on Saturday, and Amaker hinted that the same may be the case this upcoming Saturday.

“We are probably gonna have to use different people, he's been that good of a player all year,” Amaker said. “We didn't play you know well against him especially down there at their place, I would imagine that, with Lewis and Henry and Mason, whoever, we could have a variety of different people that could guard him.”

Penn’s top scoring weapons, who have consisted of an overwhelming majority of the team’s offensive output, remain juniors Devon Goodman and AJ Brodeur. The Crimson will have one less complementary player to worry about, however, as freshman Michael Wang will be out with knee issues. Wang had a particularly impressive nine-point first frame against Harvard at the Palestra, but the Quakers will have to look elsewhere — such as wings Antonio Woods, Jake Silpe, and Bryce Washington — for offensive firepower.

“Penn has historically been just a disciplined team, we see that as far as their rotations on defense, them always make an extra pass and making the right plays on offense,” junior guard Christian Juzang said. “...I think whoever wins the small battles is probably gonna come out on top.”

Two other factors defensively for the Crimson? Underclassmen Danilo Djuricic and Kale Catchings, both who have come away in recent games with multiple fast-break dunks after swiping away passes. The two have seemingly fed off each others’ pugnacity inside, offering some strong finishes at the rim while demonstrating the capability to shoot from deep.

Harvard previously beat Penn in overtime off of a thrilling finish, which included a now-signature Bryce Aiken last-second triple. It fell by just six in its follow-up game at Lavietes Pavilion in what was a 59-53 defensive tug-of-war.

John J. Lee Amphitheater, with no Yale uniforms on the court, shall be a peculiar sight on Saturday. But with Penn squeezing by in the tournament with a do-or-die win over Brown to complement three straight wins to close the season, it will be top-ranked Harvard who may face some added pressure.

Not so for Christian Juzang, however.

“I'm more so excited than feeling pressure,” Juzang said. “That's my thing. I'm excited. We got an opportunity to stay alive in this thing and an opportunity to keep our postseason going. So for me, it's just excited to get back to work this week, and to have another weekend alive.”