As this year’s Harvard team prepares for a Division-I playoff push of its own, the lasting impact of the 1989 National Championship is palpable.
By Spencer R. Morris 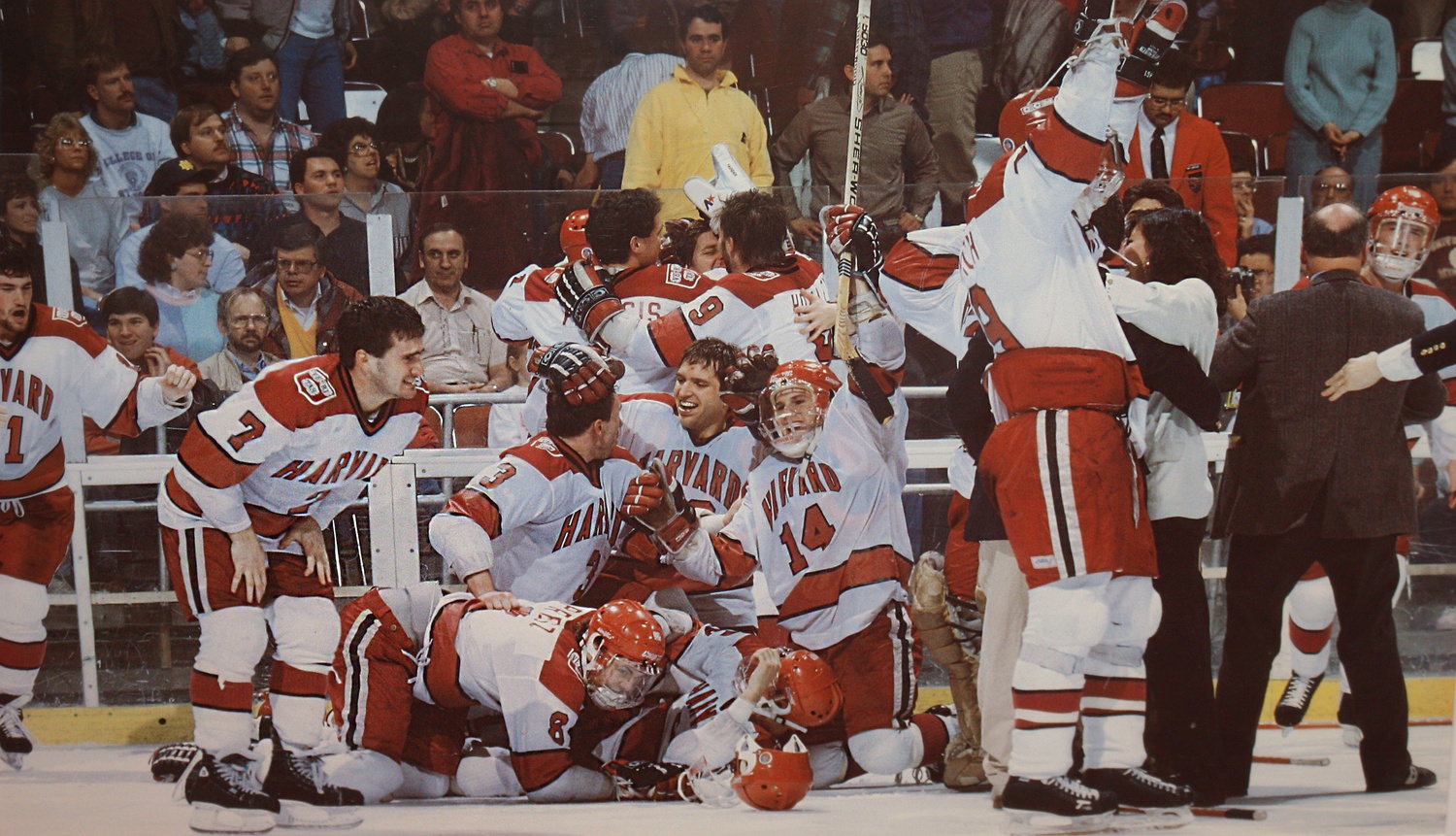 Thirty years ago, the Crimson won its first and only NCAA title in a 4-3 overtime thriller against Minnesota. By Courtesy of Harvard Athletic Communications

On Sunday night, the No. 13/14 Harvard men’s hockey team learned that it would face off against No. 4 Massachusetts in the first round of the NCAA Tournament. The group gathered in the Bright-Landry Hockey Center’s Boynton Lounge to await its draw, eager to embark on the journey to the promised land.

Just two weeks earlier, another Crimson team came together in that very room, eyes similarly glued to the television screens. But they weren’t watching ESPNU’s Division-I selection show in anticipation of matchups to come; rather, they were reliving a past game — one they all shared three decades ago, memories of which scarcely required the visual reminders on the screens around them.

That night, a dozen members of Harvard’s 1989 National Championship team returned to their old stomping grounds for a nostalgic commemoration of the 30th anniversary of school’s first-ever NCAA crown.

“It was really great to see so many guys be able to make it,” said Crimson coach Ted Donato ’91, a member of the 1989 squad in his own right. “It is a testament to how close the group is. I was looking forward to the night and to seeing everybody…but I enjoyed it even more than I was hoping or expecting to.”

April Fools’ day, 1989, was no joke: it marked a momentous win for both the Crimson program and the school at large. Then-junior Ed Krayer ’89-90 played the hero, picking up a rebound generated by a point shot off a faceoff and putting it home in overtime. The goal defeated Minnesota, 4-3, and silenced the effective home crowd for the Golden Gophers at the St. Paul Civic Center — remembered for its transparent boards.

The Crimson was superb throughout the 1988-1989 campaign, going 15 games without a loss to open the schedule en route to a 31-3 overall record. The squad was as deep as a Harvard team has ever been, boasting numerous Olympians and NHL draftees. Chief among them was captain and eventual Hobey Baker Award winner Lane MacDonald ’88-89. Dynamic forwards Peter Ciavaglia ’91, C.J. Young ’90, sixth-year senior Allen Bourbeau ’88, and Donato helped round out the group’s attack, while role players like enforcer Kevan Melrose ’90 also contributed vitally to the championship puzzle.

“As a group, there’s nothing better than achieving a goal together, and having a chance to share it,” MacDonald said. “You sacrifice so much, you go through so much together, and then when you get there, you just get to share it with 25 of your best friends.”

Behind the bench: the program’s most decorated coach, Bill Cleary ’56. Cleary epitomized Harvard athletic excellence for six decades, first as a player, then a bench boss, then the Director of Athletics.

“At that point for Harvard, it was the first NCAA Championship,” MacDonald noted. “For Bill Cleary, for him to achieve that goal was fantastic. For the university to achieve that goal, and the message that it sent about being a student-athlete and the fact that you can do it at the next level, was great.”

In a way, the watch party provided an opportunity for the 1989 champions simply to marvel at the spectacular humans and hockey players on that roster.

“We didn’t need to win the game to be friends forever, but I think having that common bond over something as special as this, it gives us something to connect [around] for the rest of our lives,” said Chuck Hughes, a freshman net-minder during the 1989 season and current co-chair of the Friends of Harvard Ice Hockey. “Harvard hockey players are close to their classmates, but this is a four-year window of friends for life that we have.”

The get-together also served as a celebration of a truly dominant stretch in the hockey program’s history — in no small part due to the caliber of players that comprised those squads. In the seven seasons leading up to and including the fateful championship year, the Crimson reached the NCAA Tournament all but once. By late March, 1989, Harvard had advanced to the semifinal round in three of its last four campaigns, with the 1983 and 1986 teams earning a heartbreaking second place. In short, by 1989, the program craved a fleeting first-place finish and place atop college hockey for all of time. 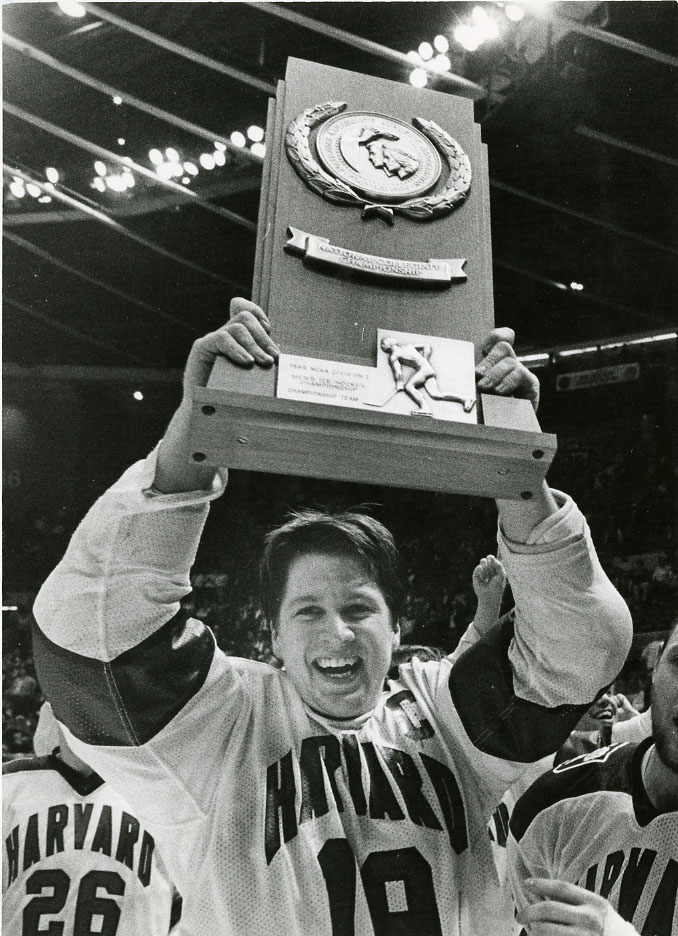 Lane MacDonald '88-89, captain of the national title squad, considers the Division-I crown one of the top highlights of his decorated hockey career. By Courtesy of Harvard Athletic Communications

The group’s senior leadership remembered the painful runner-up finish in 1986 all too well. The Crimson took a 4-3 lead into the final frame only to squander it to two Michigan St. tallies in the opening minutes of the period. With just three minutes remaining in the tilt and the game knotted at five apiece, Spartan standout forward Mike Donnelly stole the trophy away from Harvard with his game-winning goal.

“We played in the National Championship game in ’86,” Krayer began. “We thought we had that game won. We were beating Michigan St. after two periods. We thought we were there. But we lost it. So, there were six of us who were there in the room in ’89 to make sure that that wasn’t going to happen again.”

The loss was a true testament to hockey’s tendency to be decided by the narrowest of margins, the slightest of mistakes, and the shortest of momentum swings. And for the Crimson, it stung. Because of it, most members of the 1986 team never tasted a national title.

Yet, hockey has a funny way of restoring justice. Upon re-watching Harvard’s only college hockey crown to date, the 1989 alumni realized that the “hockey gods” may have returned the favor from 1986’s heartbreak after all. In the first period, Krayer put a hit on an opposing Minnesota player that sent him crashing dangerously into the corner-boards — reason for a penalty back then and almost certainly worthy of ejection in today’s game. Luckily, the Gophers player avoided injury, and the play went uncalled, keeping Krayer in the game to score the overtime clincher.

And that goal changed everything. It’s the reason over half the 1989 team gravitated back toward the Bright earlier this month, and it’s a major reason why the group remains so close, even after three decades of careers and families.

“Coach Cleary had a great line in the locker room before we went out on the ice for overtime,” Krayer recalled. “He said, ‘Guys, if we win this one, we walk together forever.’ And we did. And we do…. We went through a once-in-a-lifetime experience together, so the bonds are tight, the friendships are close. It’s really pretty special.”

As this year’s Harvard team prepares for an NCAA Tournament run of its own, the lasting impact of the 1989 National Championship is palpable.

It doesn’t hurt that the Most Outstanding Player of that year’s tournament currently mans the Crimson bench. Now in his 15th season in the role, Ted Donato has firmly reestablished the winning culture to which he grew accustomed in his playing days, but that eluded the program for the better part of the 1990s. Year in and year out, the team’s goal — its lofty expectation — is to win a Division-I title.

“You come to college to win a National Championship,” said current co-captain Michael Floodstrand, shortly after the selection show on Sunday. “The number-one thing is just being able to play as long as you can with the guys you’ve been working and sweating with all year. That’s the thing that motivates me and motivates the guys that have been there.”

This culture, and Donato’s overall approach to coaching young men, draw direct inspiration from the way Cleary cultivated one of the most successful eras in Harvard hockey history.

“The simplest connection would be that my goal is to have our guys have the kind of experience that coach Cleary provided for us,” Donato said. “Coach Cleary had a unique way of filling us all with a lot of confidence…a way of really empowering the players into thinking that there was nothing that we couldn’t accomplish.”

Reaching college hockey’s pinnacle was undeniably a highlight of Donato’s Harvard experience, as it was for Hughes, Krayer, MacDonald, and others. An extra emotional layer thus exists beneath the surface of Donato’s coaching: knowing the ongoing brotherhood and sense of accomplishment resulting from his own national title, the bench boss strives to give his players the same experience.

When Harvard takes the ice on Friday afternoon, looking to ignite a deep NCAA run with a win over the Minutemen, Donato and his 1989 teammates will be pulling especially hard for their alma mater. Thirty years after their triumphant evening in St. Paul, Minn., the profound pride and glory live on.