Men's Lacrosse Surges to .500 Midway through the Season 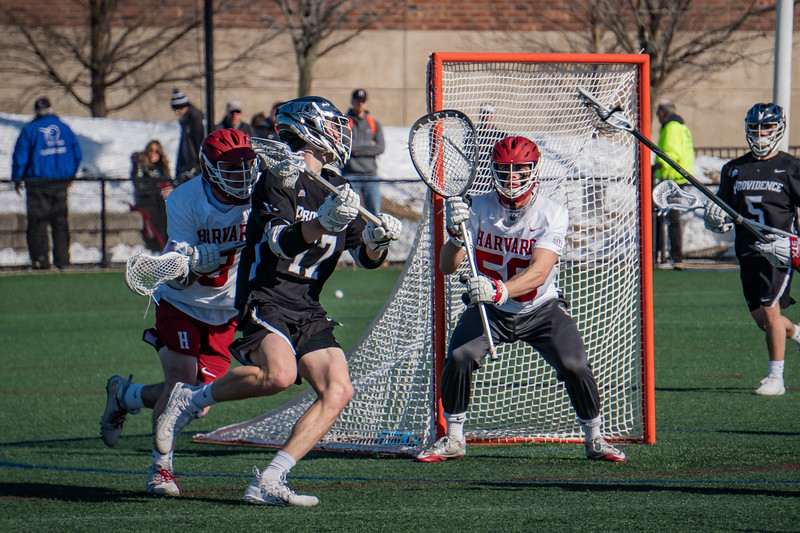 Goalie Kyle Mullin has proven a key player for the Crimson this season. The sophomore posted 19 saves in back-to-back games during Harvard's most recent road trip. By Brendan J. Chapuis
By Ben Morris, Contributing Writer

After starting the 2019 season with three straight losses, many wrote off the Harvard lacrosse team. Yet, after two straight wins against Hartford (1-8, 1-1 American East Conference) and Providence (4-5), the Crimson (4-4, 1-1 Ivy League) went into its week-long road trip full of confidence and motivation.

Harvard’s road trip began on March 16 with its Ivy League opener against Brown (3-5, 1-0 Ivy). The Bears held the lead for most of the game, but the Crimson would not let them break away, staying within three goals at all times.

Freshman attacker Austin Madronic helped lead the comeback effort with a goal in the third quarter, continuing his streak of at least one goal per game in his first six collegiate games. Unfortunately, the breakout star, who was recently ranked No. 6 out of all Division I men’s lacrosse freshman by Inside Lacrosse, sustained a slight concussion that would sideline him for the rest of the game.

With 7:45 left in the fourth, junior midfielder Nigel Andrews tied the game at 14. The teams continued to battle, but Brown was able to break away by scoring two goals in the final two minutes to secure a 16-14 win. Despite the loss, junior attacker and tri-captain Kyle Anderson was able to net five goals, and sophomore goalie Kyle Mullin recorded 19 saves. However, the team cares little about individual stats and looked to bounce back quickly.

Three days later, Harvard traveled across the Charles River to take on rival Boston University (7-3, 2-1 Patriot League). It was an important game for the Crimson, not only because the team was taking on a rival who was undefeated at home, but because the game marked the halfway point in the 2019 season and Harvard needed a big win.

Although the team was without Madronic, the rest of the squad fought hard, and the Crimson found itself in a tight game, down 5-4 at halftime. However, the Terriers came out and played strongly to enter the fourth quarter up 9-5.

“I thought we started out the game poorly, making a lot of mental errors and turning the ball over,” Andrews said. “We improved as we finished out the first half, but then came out in the third quarter making the same mistakes and found ourselves down by five goals.”

The Crimson battled back, though, and with 5:25 left in the fourth, the game was tied 9-9. In the last few minutes, each team scored a flurry of goals, and Harvard briefly took the lead, but a BU goal with one second left forced overtime. Yet, one overtime would not be enough to decide this one.

Mullin was able to make more clutch saves — stopping 19 total for the second straight game — and finally, with 1:45 left in the third overtime, Andrews scored the walk-off goal to give Harvard a much-needed win.

“We were resilient and fought our way back to force overtime, which says a lot about the character of the team,” said Andrews when asked about the win. “Overtime was sloppy, but we eventually found our groove on offense and were able to finish out the game and get a big win.”

On March 23, Harvard traveled to Hanover, N.H., to take on Dartmouth (2-5, 0-1 Ivy League). The game was another important one for the Crimson. A win would secure a winning record for the road trip and put the team back at .500 on the year.

The Crimson leapt out to an early 4-1 lead, but Dartmouth battled back and took a 7-6 advantage in the third before finishing the quarter tied at seven. After falling in several tight games at the beginning of the season, the team made sure to make consistent fourth-quarter play a focal point moving forward.

“Obviously, we don’t want to be in a position where we’re down in the third quarter, but our play in the fourth quarter has definitely improved over the last four games,” said senior defenseman and tri-captain Jonathan Butler.

Harvard scored one early in the quarter, and then, just as the Crimson managed in several games earlier in the year, went on a quick but deadly run, netting three goals in less than three minutes.

Harvard found itself up 11-7 with 5:13 left, and although Dartmouth tried to stage a comeback, there was not enough time. The game ended as a 12-9 win for the Crimson.

The Crimson received major boosts from sophomore midfielder Steven Cuccurullo, who won 20 of 22 faceoffs, and junior midfielder Jeremy Magno, who netted four goals just two weeks after returning from an injury that kept him out for the first four games of the season.

“Overall, it’s great to get an Ivy League win after a tough loss against Brown the week before, so we feel like we have plenty of momentum going into the rest of our league games,” Butler said.

The team looks to continue its play against Albany (3-4, 2-0 American East Conference) at 7 p.m. today.

“At 1-1 in the Ivy League, we still have all of our goals for the season in front of us and we’re hoping to get a big win over Albany on Wednesday in the Stadium,” Anderson said. “The first game in Harvard Stadium always adds some extra energy to our play.”

Just over halfway through the season, the Crimson have battled all the way back, winning four of the last five games and are now back on a win streak. A win against Albany would put Harvard over .500 for the first time this year, but it is safe to say that the Crimson does not want to stop there.