Students Demonstrate in Support of Democracy in Sudan 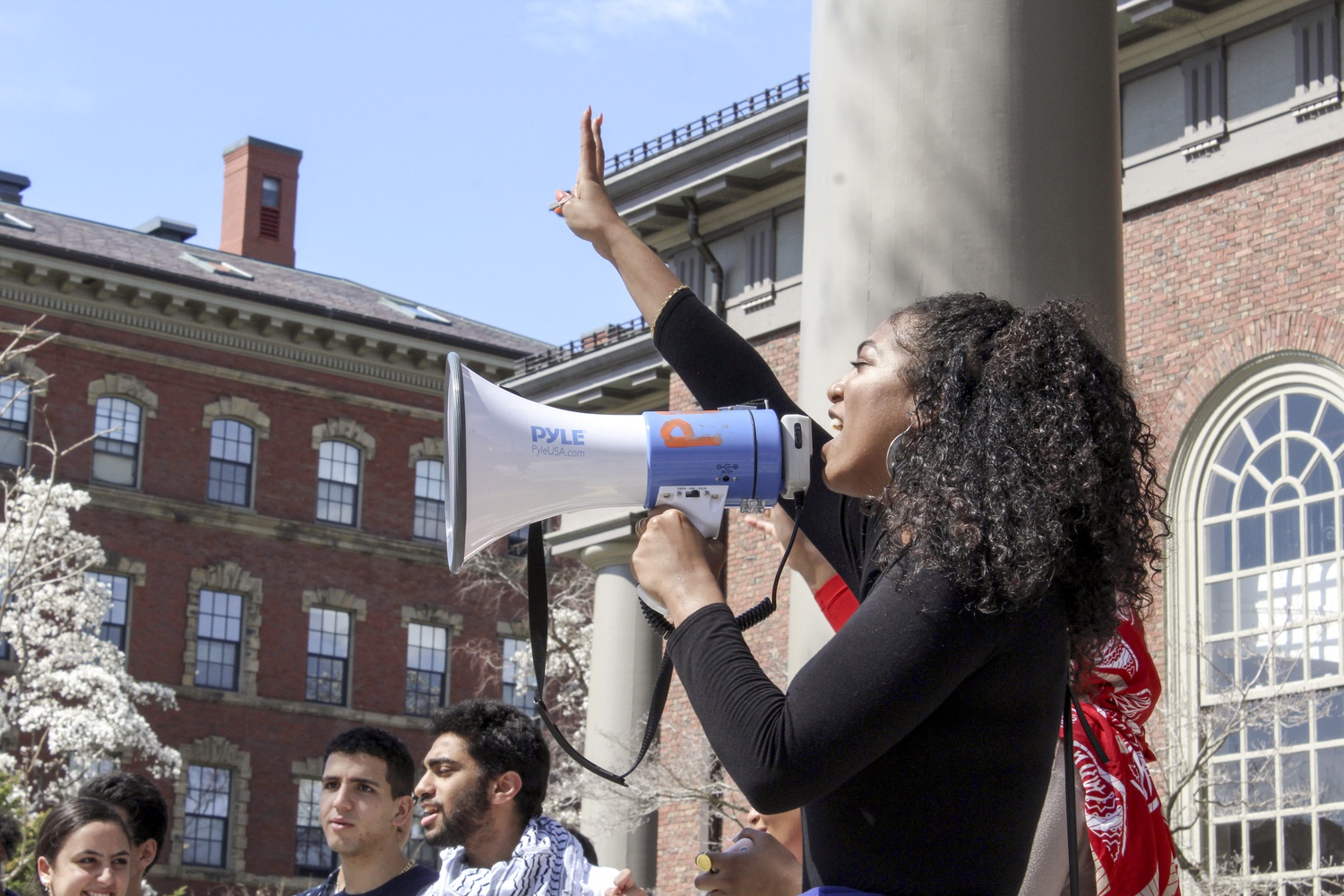 Roughly fifty students gathered on the steps of Memorial Church Saturday afternoon to demonstrate support for democratic governance in Sudan.

The country’s longtime autocratic ruler President Omar al-Bashir was ousted in a military coup on Thursday. Since December, when the price of bread in the country tripled, thousands of anti-regime protesters have demonstrated in the capital city of Khartoum and across Sudan. Sudanese activists estimate that at least 50 people have been killed and more than 800 have been arrested since protests first broke out.

“For the first time in 30 years, there was an actual feeling that we are pushing towards democracy in our country,” student organizer Sahar M. Omer ’20 said to the cheering crowd.

General Awad Ibn Ouf, formerly the defense minister under al-Bashir, instituted himself as a replacement leader for a day before handing power to another general, Abdel-Fattah Burhan, on Friday. The protesters continue to call for a democratic government instead of a military regime.

“The Sudanese students on campus — there are 14 of us, and I am so happy to call them my brothers and sisters from Sudan — have organized this protest to bring awareness to what is happening, but also to give support for the people in Sudan who are in the diaspora who are calling for a democracy,” Omer said.

Throughout the half-hour demonstration, students chanted in Arabic and English, including using a popular phrase during the 2011 Arab Spring: “The people demand the fall of the regime!” 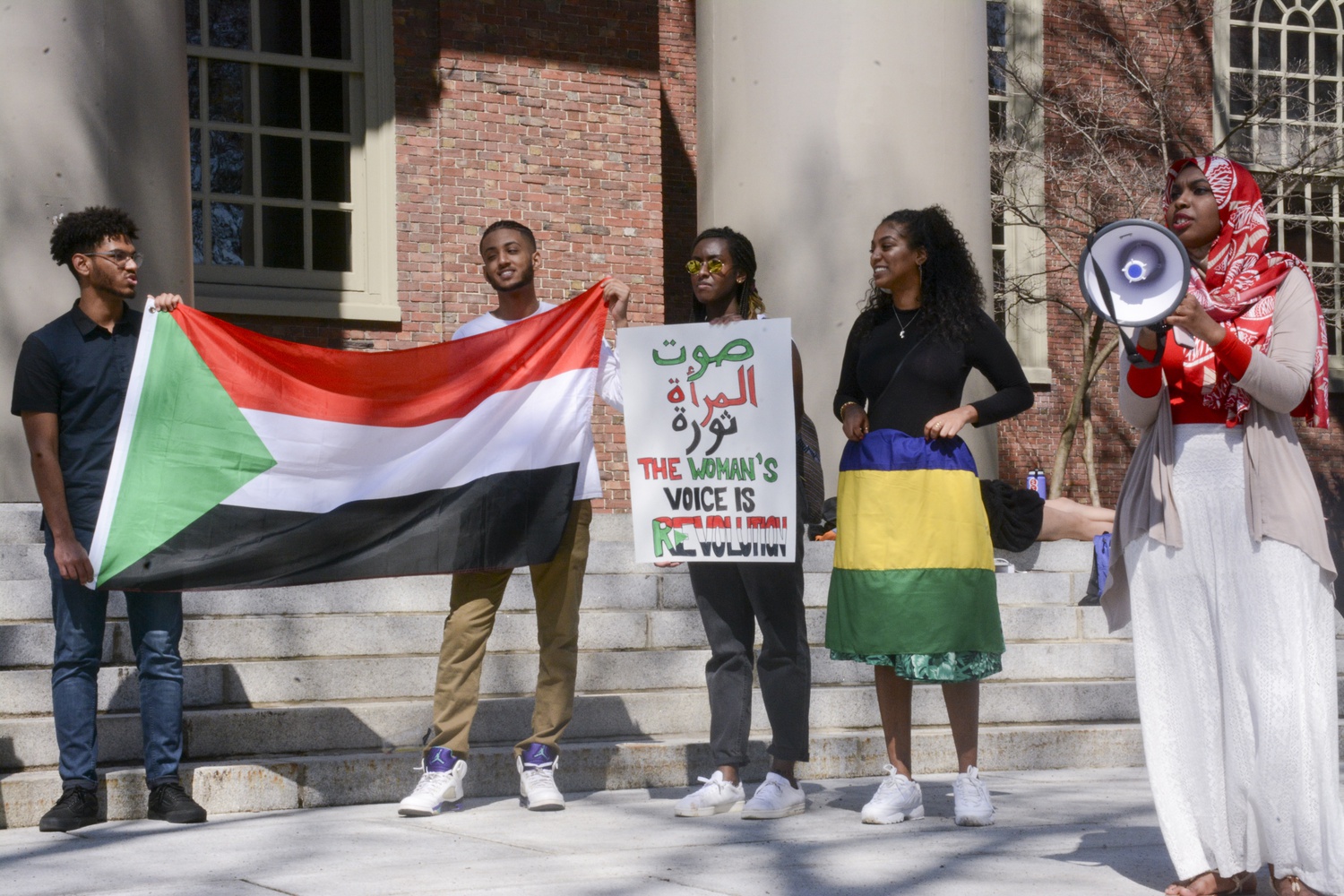 Sudanese students protest in support of democratic governance in Sudan on the steps of Memorial Church on Saturday afternoon. Days before, Omar al-Bashir, the dictator of thirty years, was ousted in a military coup. By Camille G. Caldera

Ilham A.T. Ali ’21 led the crowd in chants, including “Kandake queens and we don’t fear you! We beat the British and we’ll beat you too!” as well as calls for the International Criminal Court to act against al-Bashir.

“Many people still are being killed. We’re doing this for all our siblings in Darfur and South Sudan,” Ali said. “The regime has fallen twice in the past couple of days. It will fall again until we get the democratic civilization we’re asking for.”

Leena A. Hamad ’21, who attended the event and spoke to the crowd, also said she hoped the military regime will lose power.

In a speech at the event, Ali spoke about the how the political unrest has affected her family.

“Whenever I hit up my mom, there’s a chance she’s not picking up because she’ll be using her burner phone so they can’t track her down,” Ali said. “That’s kind of the reality activists live in in Sudan. It’s kind of like a regime of terror.”

Ali also shared a story of a friend who was arrested and beaten by the police at age 18.

“The past few months have been difficult. And just having everyone here supporting us – me and other Sudanese students on campus — when we’re so far from home, so far removed from the cause, yet so in the middle of the cause at the same time, it’s truly amazing and it’s more than I could ever hope for,” he said.

Mohamad Y. Khalifa — a Sudanese Arabic instructor in the African Language Program at Harvard — also spoke at the demonstration.

“I really applaud all of you who gathered here in support of the forces of change and democracy in Sudan,” he said. “It’s a very high time to say enough and to move to restore our democratic system.”

“I see the future in your eyes,” Khalifa told the protestors. “You are the fuel of our future.”