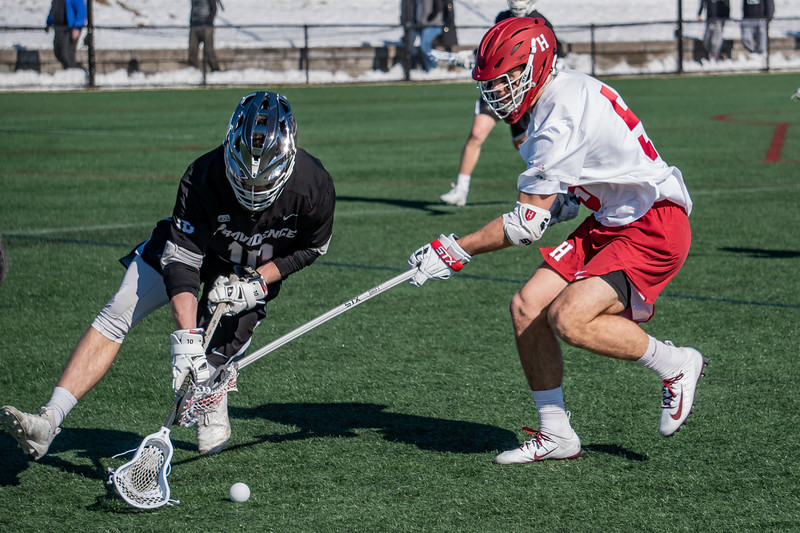 Harvard saw its playoff hopes knocked away with a hard-fought heart-breaker to rival its conference rival Princeton. By Brendan J. Chapuis
By Ben Morris, Contributing Writer

A week after one of the toughest losses of the year against No. 7/6 Penn (8-3, 6-0 Ivy League), tri-captain and junior attacker Kyle Anderson came out and tied his career high with seven goals in a stellar performance against Princeton in an effort to keep playoff hopes alive for the Crimson.

With just two games left in the 2019 regular season, Harvard traveled to Princeton, New Jersey to take on the Tigers (7-6, 2-3 Ivy League) in its final away game of the year. The team knew that it needed a win in order to have a shot at the NCAA tournament, which meant that players would have to step up in order to force the issue.

The first quarter was relatively calm until around the 9:30 mark, when an explosion of scoring took hold of the game. Unfortunately, the frenzy did not swing in Harvard’s favor, and by the end of the quarter, with more goals scored than minutes played in the last half of the first, the Crimson found itself in a 7-4 hole. Leading the team at this point was freshmen attacker Austin Madronic, who was able to notch two early goals.

However, in the second quarter, Anderson began to catch fire. Having already scored one in the first, Anderson went on to add another five goals in the second quarter, but he was not done there. Madronic also added another goal in the quarter, as well as an assist, giving him a hat trick on the day. Yet, Princeton had a response to every Harvard offensive, and the Crimson went into the half still trailing by the same margin as in the first, now down 13-7. “I thought we picked up some good momentum offensively in the second quarter, and even though we were down three going into halftime, we still felt that game was well within reach,” said Anderson.

Harvard came out of the half determined and was well aware that its season was on the line. Despite going down 15-10 early, the Crimson battled its way back, led in a valiant effort by sophomore attacker Myles Hamm, who recorded a hat trick with three goals in the quarter.

As the fourth quarter began, it was now or never for the Crimson, who was down 16-13. Anderson followed up an early goal by junior midfielder Jeremy Magno with one of his own. The goal tied Anderson's single-game record for goals (seven) and points (eight). “I was just trying to do everything I could to get a win,” said Anderson. “We all knew we needed to win that game to keep our playoff hopes alive, so it was just a feeling of desperation.” The goal also brought the Crimson within two (down 17-15), which was the closest margin since 6:28 left in the second quarter.

The team fought as hard as it could and gave its all, but eventually fell 19-15. No words could do justice in describing the emotions surrounding the team at the cry of the final whistle. After working and pushing each other all year, knowing that Harvard was no longer eligible to make the NCAA tournament was not an easy pill for the team to swallow.

Although he had a great game, Anderson was still much more focused on the team. “It was really tough to lose that one and to realize that our season could no longer be extended outside of the regular season. I know it was especially tough for our seniors who have all given so much to this program,” he said.

While the team may not make the NCAA tournament this year, there is still one game left on the schedule. The Crimson have an opportunity to end the year on a positive note, as it will take on rival and No. 4 Yale next Saturday in Harvard stadium.

“The Harvard–Yale rivalry has so much history behind it and it is exciting to be a part of this rivalry,” said Madronic. “I know that we will come out and play as hard as ever, regardless of our standing in the Ivy League.”