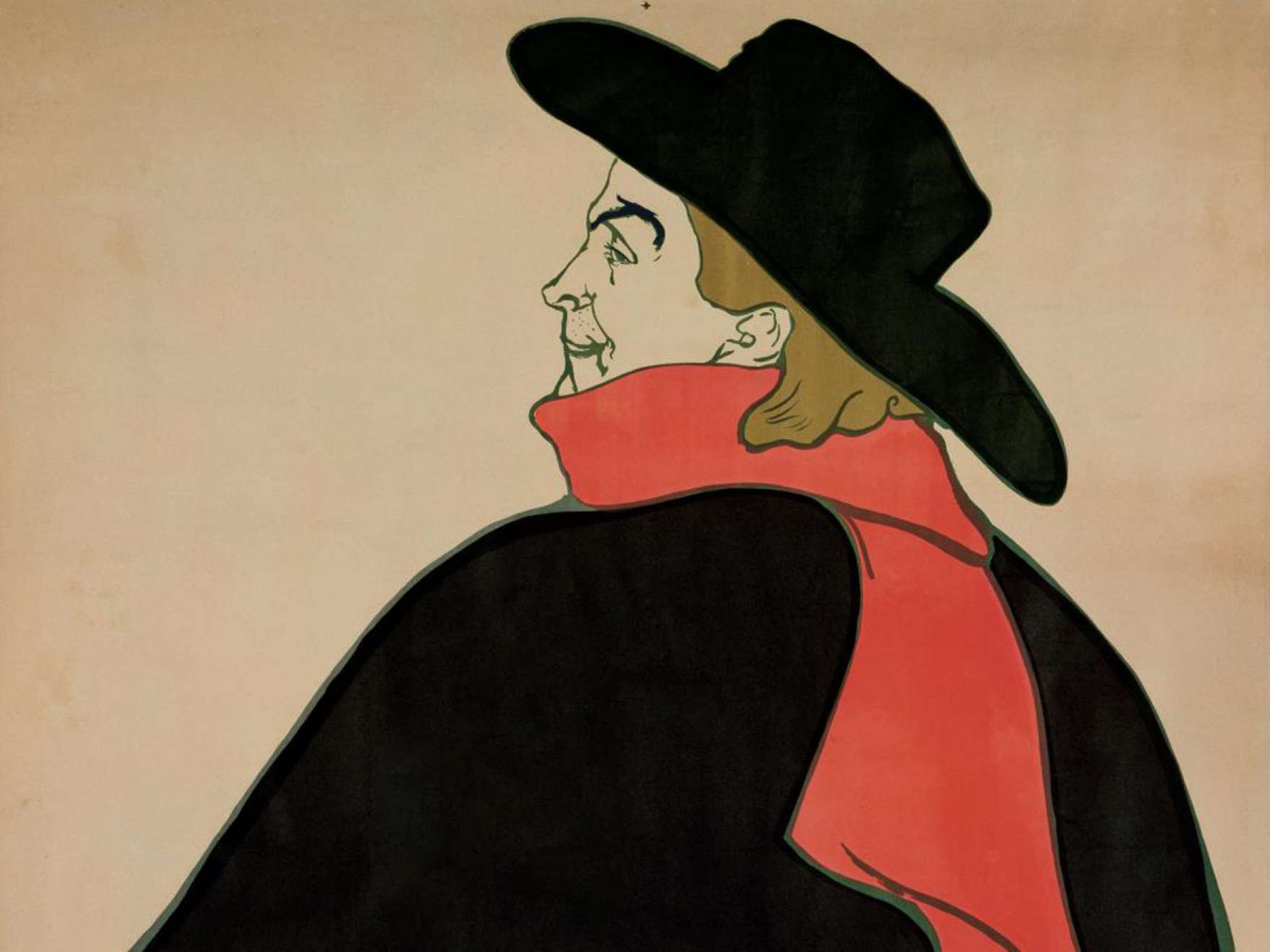 The latest MFA exhibit stars 19th century French artist Henri Toulouse-Lautrec, who is best known for his posters. By Courtesy of the Museum of Fine Arts, Boston
By Cassandra Luca, Crimson Staff Writer

Picture late 19th century Paris and a cat poster might come to mind, advertising a product that many will forget. After all, the image’s style is the important thing: clean lines, black ink. People often associate the image with Henri de Toulouse-Lautrec, an influential painter who rose to prominence when the cat poster was created (the actual artist is Théohile-Alexandre Steinlen, by the way). Although Toulouse-Lautrec himself didn’t create it, that piece and many others are on display in the latest exhibition at Boston’s Museum of Fine Arts, “Toulouse-Lautrec and the Stars of Paris.” The exhibit captures the full range of the artist’s talents, situates it all in the context of his life and those of his contemporaries — and makes a trip to the museum well worth the commute. Though perhaps the adage “quality over quantity” ought to apply to most art exhibits, the MFA took these words too lightly over the past few months when curating many of its sparsely populated temporary exhibitions — but luckily, the same cannot be said for this one. Fans of Modernist French art should find themselves satisfied.
Toulouse-Lautrec is known for his more-than-friendly relationships with prostitutes, his alcoholism, and his posters that gave life to the at-times seedy underbelly of Paris. Amid a sea of his contemporaries, many of whom were poor and could barely make a living on their artistic talents, Toulouse-Lautrec was wealthy and his family subsidized his intended path. Unfortunately, he broke his legs in early childhood and never quite recovered. Toulouse-Lautrec felt like an outsider for the rest of his life, which presumably led him to feel comfortable mingling with other “outsiders” in Paris. The many sketches exhibited at the MFA, including a series titled “The Elles Portfolio,” are a testament to these close relationships: He depicts many women in intimate settings to which he would not have had access if he had not earned their trust. One particularly touching sketch depicts two women making a bed. It is unclear if they are prostitutes, but if they are, the act of making a bed humanizes women in an unforgiving and possibly isolating profession.
Though he died in 1901 at the age of 36, Toulouse-Lautrec was incredibly prolific, producing more than 5,000 drawings and nearly 400 prints and posters. The MFA’s curation is a testament to his wide range of skills: Sketches are displayed next to oil paintings, posters, and watercolors. For his posters, the medium for which Toulouse-Lautrec is best known, he used a technique known as lithography, which involves drawing on a slab of stone with ink or greasy writing implement. The drawing is then affixed to the stone via chemical processes. When pressed onto paper, the image is the reverse of that on the stone. The MFA did a superb job of explaining the technique behind Toulouse-Lautrec’s artistic process. Certainly examining the art without background knowledge is possible, but the information spread throughout the exhibit, which also further contextualized the women he painted and befriended, was crucial for that extra touch: connecting to the art itself.
It is likely a distinctly American perspective to believe that bigger is better, but this point of view is particularly true for art exhibitions. An exhibition requires a certain number of works — difficult to quantify, but it’s easy to tell when there are too few works of art on display — to effectively paint a picture of an artist’s life, their technique, style, and interests, and the people they knew that perhaps acted as influences for their work. The MFA’s exhibition is no exception, and finally breaks its recent tradition of displaying a paucity of works while relying on their respective flashiness and star power to carry the exhibition. (Looking at you, “Takashi Murakami: Lineage of Eccentrics” — the wall-length dragon mural might have been awe-inspiring, and the smiley-faced flower-patterned floor might have been an Instagram-worthy shot, but three or four singular works cannot propel an entire exhibition to success.) As for the cat poster that most people seem to recognize when they see it? It was here too, serving as a delightful way to further demonstrate the influence that Toulouse-Lautrec had during his lifetime. The wall placards, furthermore, humanized a man who likely never felt comfortable in Paris’s upper class. He may have been wealthy, but it is doubtful that those just as moneyed as him ever let him forget about his height — four-foot-eight — or his health problems.
Frequent visitors to the MFA will be delighted to note that a permanent fixture from the Impressionist wing, “Antibes, The Pink Cloud” by Paul Signac, found a temporary home in this exhibition. Toulouse-Lautrec is not the only featured artist, though he is the focal point. Those interested in how others influenced him, or vice versa, can examine works by Maxime Lalanne, Auguste-Louis Lepère, Henri Rivière, and Pierre Bonnard, among others. That the curators at the MFA drew upon the Harvard Art Museums, their own archives, and other lenders, is a testament to the exhibit’s success. It showed their commitment to expanding the display’s focal point, which gives a visitor a pleasurable viewpoint into Paris, its (less-showcased and oft-ignored) inhabitants, and the artists who mingled with them to produce humanizing works of art that still have the power to move the viewer.

— Staff writer Cassandra Luca can be reached at cassandra.luca@thecrimson.com.