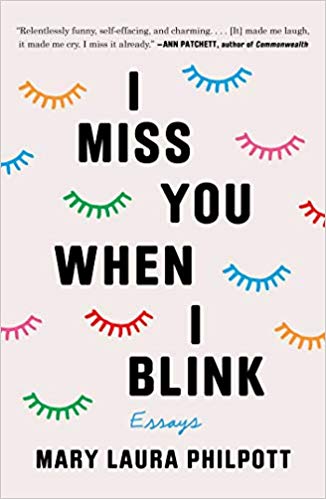 By Courtesy of Atria
By Cassandra Luca, Contributing Writer

Mary Laura Philpott would likely fit in well at Harvard. After all, the first 30 pages of her new memoir, “I Miss You When I Blink,” detail her neuroses about wanting everything to be perfect, her insatiable desire and quest for success, and a crippling worry that she’s not doing enough or wanting the right things. But forget about the negative aspects of those stereotypes for a moment, and Philpott is able to accurately portray the traits and anxieties of people like the average Harvard student who runs on the guinea pig wheel without realizing that the race will never end. Unless, of course, they jump off and discover what it is, exactly, they’re doing or why they’re running in the first place. Philpott’s essays explore interactions with her children, her paralyzing fear of what to do after college (English concentrators, unite!), how to cope with getting that star-studded job but then feeling unfulfilled and empty, and the difficult yet worthy beauties of falling in love. She unpacks a lot, with varying degrees of success.

Like most essays a college student will write over the course of four years, some of Philpott’s are really good and some are just...not. This is to be expected, given that some ideas are much more difficult to express than others — like the inescapable feeling of not having done enough even after having checked every single box that leads to the completed checklist of “success.” Some essays end with no seeming resolution, while others are wrapped up in so neat a proverbial bow that one wonders how many times it took Philpott to craft that on-the-nose sentence.

Philpott’s essays are distributed along a bell curve[, meaning that (bear with me for a moment with this analogy): The early ones are not excellent, the middle ones are, and the ones at the end are also lackluster. Collectively, the balance makes her collection of essays worth reading, even if the reader is sometimes left wondering, “So what?” from the author, and even if some topics are poorly tackled.

An early essay, titled “The Perfect Murder Weapon,” relies predominantly on telling the reader everything. Indeed, one of the sentences even says “My name is Mary Laura Philpott, and I am addicted to getting things right.” It’s an indirect thesis and the clarity is refreshing, but the rest of the chapter proceeds to tell the reader how, when, and why Philpott likes things to be perfect. One learns a lot about her neuroses but in a way that is precisely what ninth-grade English teachers say not to do: She tells instead of shows. A few pages of that make for repetitive reading.

Three essays in quick succession stand out among the rest: “P-O-I-S-O-N,” “Good Job,” and “This Guy.” The first details the problematic bad boy that Philpott dated in college — a boy who was clearly alluring but who, according to Philpott, “was totally wrong but really fun for a little while.” He very clearly came and went as he pleased with very little regard for her feelings, leaving her to sit by the phone waiting for him to call and do a great deal of emotional labor within the relationship. We know this because Philpott told a story in this chapter, making it far more effective than her earlier ones, and, because of the extended anecdote, teaches the reader a lesson about the line between wanting to make a relationship work and doing all the heavy lifting alone.

“Good Job” is predictably about her first job, and opens with a funny exchange between her and a friend: In reference to a Roomba, the friend says, “It’s like a drunk bee,” to which Philpott replies, “Or us in our twenties.” It’s moments like these when one wishes she dropped more one-liners like this throughout her prose — she has the capacity to do it, but chooses to ruminate more often than not. This chapter is indeed full of one-liners. A couple pages later, on the subject of success, Philpott writes “What if work is just a thing we do to distract ourselves from the fact that the world is falling apart? In that case, it doesn’t even matter what job you do or how well you do it.” Harvard students: This is food for thought.

“This Guy” describes how she met her husband, and the inevitable conclusions about love that a happily married person can draw — cheesy perhaps, but arguably true. She writes that “the evolution of a relationship is not something you can entirely control. Falling in love is not a matter of weighing pros and cons. Unlike other big life events — jobs, moves, homes — it’s not a thing you work toward like you’re seeking a personal-life promotion.” Again: food for thought.

Yet the chapters towards the end of the novel miss the mark. They jump from one topic to another within the same essay, which is jarring because the essays themselves are short enough that focus and unity is not only necessary, but doable. Each one should be a microcosm of some larger theme and rumination, and to string together disjointed thoughts and anecdotes without any sense of unification makes for difficult reading.

Philpott’s memoir is somewhat baffling in the range of quality from essay to essay: Theoretically, the same editor read them all, right? Collectively, they are unified under the broader theme of questioning and desiring success in all its various iterations — and the price to be paid for each one. Worth the read, but a shame that enough of the essays read as though they could have used at least one more draft.