No Plot, Little Character, Some Evocative Prose: ‘Walking on the Ceiling’ Cries Out For More 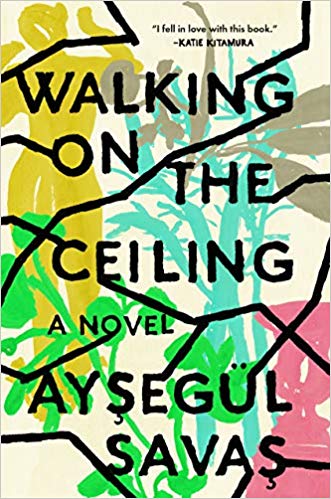 By Courtesy of Riverhead Books
By Cassandra Luca, Contributing Writer

Setting a novel in Paris almost acts as a source of comfort: It’s famous, many people have been there, and inevitably a known landmark or two will make an appearance. The pitfalls begin, however, when the setting becomes more interesting than the story. The plot of Ayşegül Savaş’ début novel, “Walking on the Ceiling,” is situated by the river Seine, near the Gare du Nord, and on the sidewalk of Boulevard Saint-Michel, but what’s notable is that these locations are more memorable than any activity that takes place there. Nunu, the protagonist who has recently settled into the city by way of Istanbul and London, meets M., a British writer who captivates her, intimidates her, and deigns to talk with her. The story chronicles her many conversations with him and her simultaneous exploration of her complicated relationship with her late mother. Yet it seems that even this self-discovery takes place in the context of Nunu’s relationship with the three other men who walk in and out of her life at different points, stifling her own voice and giving no justifiable reason for why anyone should care about this character.

Nunu appears to float along, uncertain of herself and what she’s doing in Paris in the first place. Even before she meets M., she skips the classes she’s enrolled in and finds herself intimidated by her fellow students. Sure, she makes a friend, but he disappears early on when she begins to meander through the city. There’s nothing inherently wrong with such a feeling, which is certainly a relatable one, but inaction can only sustain a plot so far. After all, plot is inherently character-driven, and if one of them, especially the main character, is not doing anything, the affected sense of ethereality and winsomeness wears off quickly.

A character lacking emotional depth is all the more difficult to bear because she should theoretically have a great deal of it: She is in the process of writing her own book, has coped with a father who dealt with a mental illness throughout her childhood, and is haunted by the memories of a mother whom she rebuffed time and time again — actions which she now regrets. Such details, especially the first of these, cry out for more detail and depth. Instead, the reader is regaled with many details about M.s’ writing and interior angst, much of which seems like an act, and is one that diminishes Nunu’s presence in her own story. She even says, “But by the time I saw him again, I knew little more about M. than I did during our first walk. It seemed that instead of covering long distances, we were digging deeper with our heels on a dirt track.”

Perhaps this is one of Savaş’ intentions: Certainly her writing is deft and delicate enough to subtly hint at Nunu’s feeling of being overshadowed by M.’s wow factor. Sentences like the following back up this hunch: “I remember that M. spoke French clumsily, making many mistakes, but without apology. Waiters never reverted to English with him, as they sometimes did with me, even though my French was probably better, certainly more correct, from my studies at university.” Halfway through the novel, Savaş writes that Nunu’s writing imitates M.’s, as if to further show how much their seemingly beneficial relationship hinders her protagonist’s creative process and independence.

If that’s Savaş’ goal, then she succeeded, but at times, it feels as though the novel can’t quite decide what it wants to be. Nunu displays such a lack of agency that she remains stagnant for much of the plot, such that the novel consists of her remembering Luke, the ex who tried to psychoanalyze her into the girlfriend he wanted her to be and remembering her mother, but without much progress. Such is the human condition, to ruminate and frustrate the act of moving forward, but unfortunately a novel must do more than that: It should capture this aspect of the human condition and provide commentary, attempt to resolve even the smallest portion of such angst, or transcend it.

Nunu’s spark of progress, a welcome relief to the lack of plot, comes only at the very (very!) end when she decides M.s’ lack of awareness — selfishness by another name — regarding her emotional needs or inner life simply won’t cut it anymore: She thinks, “It was moments like these that made me think that our friendship meant different things to me and M. At least, it was in those moments that I realized M. had other worlds in which he was equally at ease, and to which he was eager to return.” It’s perhaps the only moment when the reader can cheer for her, or feel much emotion for her at all. Nunu notices M.’s surprise at her own capabilities: “M. remarked that I knew my way around those streets like the back of my hand,” as though he hadn’t expected her to be able to do anything beyond listen to him, enraptured.

Savaş’ description of Nunu’s interior is particularly apt, as are various other phrases and sentences sprinkled throughout — they almost, but not quite, redeem the lack of plot. Particularly memorable is “Women had invisible pantries of wisdom for losing weight, for varicose veins, for reducing cellulite.” But for a novel to be considered holistically worth one’s time, it has to do more than rely on these sentences that are few and far in between.

One of the most heartbreaking and relatable lines is one in the final pages: “I had made up my mind that once he asked me directly why I was upset, I would tell him a true story, something simple and direct. This was the condition I had set and I waited impatiently for him to understand, to want to know and admit he cared.” Nunu expresses, succinctly, one of the ultimate human desires: To be not only seen, but understood — and loved for it. Savaş’ prose is at its finest here — if only some of her descriptions were more purposeful and her characters more developed. Imagine what a distinguishable plot and active character could have done to compliment such a pair of sentences.