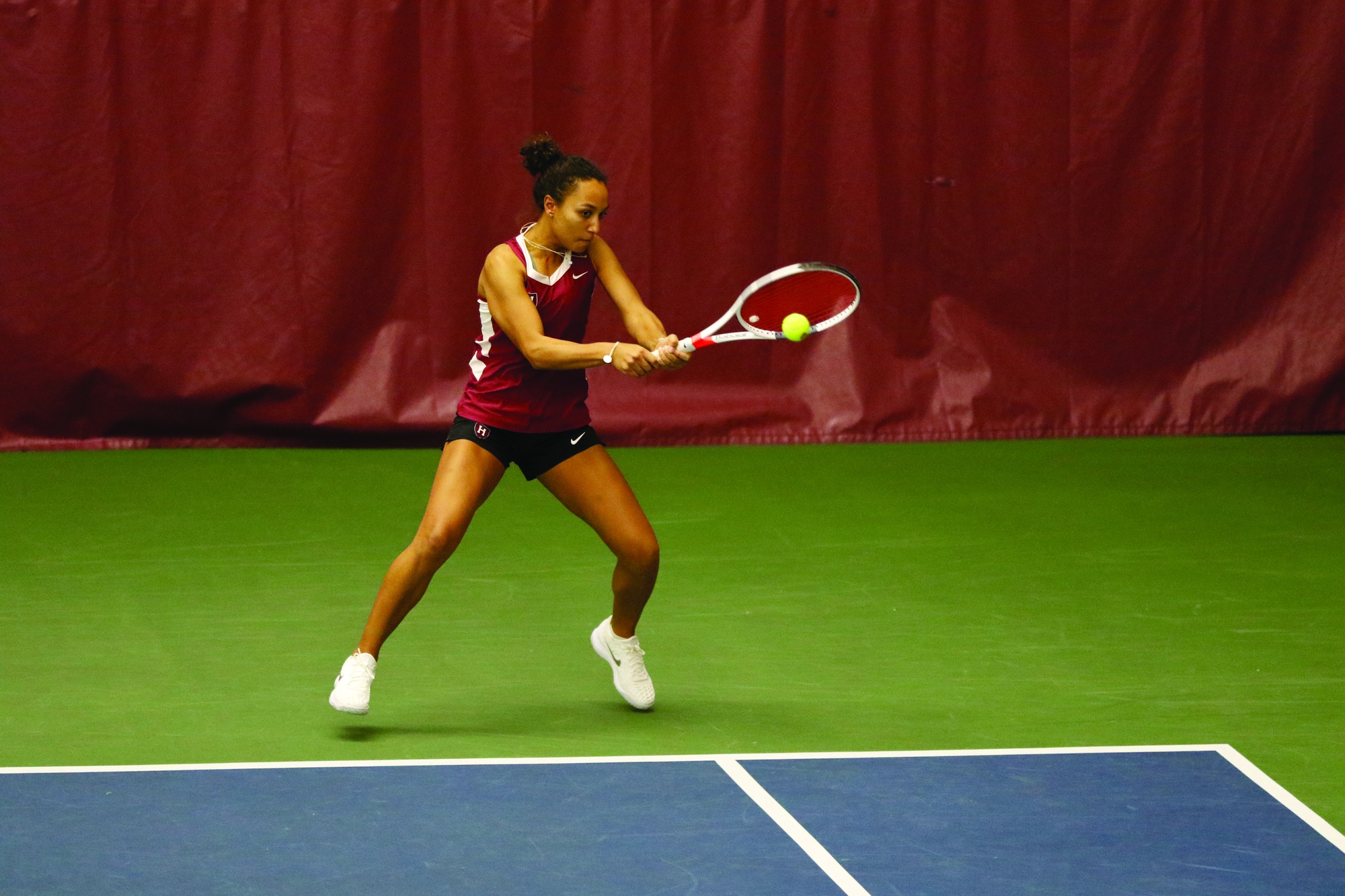 Senior Erica Oosterhout tracks a backhand at the baseline. Oosterhout is playing from the Crimson’s No. 1 singles position this year. She was a unanimous All-Ivy First Team selection in singles play last season, a feat that she will aim to match in her final season playing on the Murr Center courts.
By Eamon J. McLoughlin, Crimson Staff Writer

Senior Erica Oosterhout tracks a backhand at the baseline. Oosterhout is playing from the Crimson’s No. 1 singles position this year. She was a unanimous All-Ivy First Team selection in singles play last season, a feat that she will aim to match in her final season playing on the Murr Center courts. By Timothy R. O'Meara

The No. 44 Harvard Men’s Tennis team finds itself in good form entering Ivy League play this weekend at Penn. Harvard is coming off of back to back victories versus Boston College and Quinnipiac over the weekend, preserving their perfect records all time versus the two schools, at 11-0 and 4-0 respectively. The team now sits at 13-5 on the season, and enters Ivy League play with some momentum, as it currently is on a three match win streak. Harvard has thrived at home so far this year, only losing one match at the Murr Center, the season opener versus Buffalo in January.

Sophomore Robert Wrzesinski has been having a season to remember for Harvard, as he currently sits at 17-6 in singles and 19-9 in doubles on the year. The Vilnius, Lithuania native has been playing often in the 1 and 2 spot in singles for Harvard, and has been up to the challenge thus far. In doubles, Wrzesinski has also found success, most notably when matched with senior Christopher Morrow, as the pair maintain a 12-2 record when playing together this season. Wrzesinski received a Second Team All-Ivy selection in Doubles last season, and will be undoubtedly looking to match this accomplishment this year.

Freshman Harris Walker has also impressed for the Crimson this season, currently holding a 22-7 season record in singles. The move to collegiate tennis has not fazed the South Salem, New York native, with his most recent contribution being a victory in straight sets versus Boston College in the fourth spot last weekend. In doubles, Walker has remained solid, boasting a 12-2 record for the season heading into Ivy League play. The freshman has maintained undefeated doubles records on the season when paired with senior Michael Peters and freshman Steven Sun, racking up 6-0 and 4-0 records respectively.

On the women’s side, the Harvard Women’s Tennis team has similarly been playing impressively this season, sitting at 13-5 on the year and 1-0 in Ivy League play after sweeping Dartmouth 4-0 last weekend in its conference opener. Harvard is on a hot streak currently, as the win versus Dartmouth marked its fifth consecutive win. The majority of Harvard’s matches have been at home, and it has taken this chance to impress its home fans, racking up a 10-2 home record this season. The team continues Ivy League play this weekend, as it hosts Penn and Princeton at the Murr Center this Saturday and Sunday.

Senior Erica Oosterhout has played well in her final season with Harvard, as she currently holds a 10-7 Singles record. Oosterhout has not only been a solid No. 1 for Harvard, but has racked up wins in Doubles as well, sitting at 15-7 on the season in Doubles play. The Tampa, Fla. native has paired well with junior Natasha Gonzales, as the pair is 8-4 on the season, as well as freshman Rachel Lim, with whom Oosterhout is a perfect 5-0 this year. Oosterhout was a unanimous All-Ivy First Team selection in Singles last season, and will be aiming to match this feat in her final season.

Junior Natasha Gonzales has been solid in the No. 4 spot for the Crimson this season, maintaining a 15-4 singles record and leading the team in Singles wins. The Houston, Texas native also has 15 Doubles wins on the season, as she boasts a 15-7 Doubles record entering the second match of conference play. This record includes an 8-4 tally with Oosterhout, with the pair winning their last three in a row. Gonzales had a strong conference showing last season, finishing the year at 7-1 in Singles versus Ivy League opponents, and is on track to perform impressively again this year, as her 7-5, 6-2 Singles win versus Dartmouth got her Ivy League play off to a perfect start.