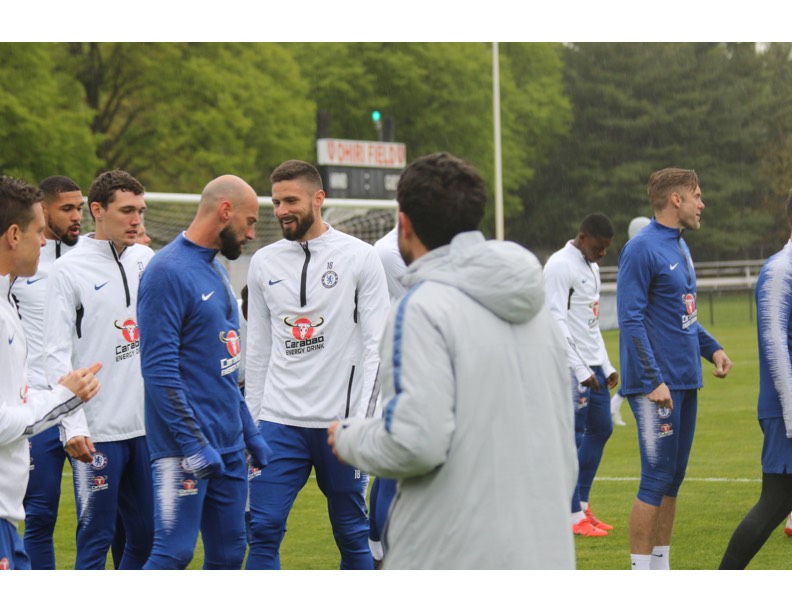 Anyone who has spent any extended period of time at Harvard knows that running into famous people is a fairly common occurrence on campus.

In addition to the world-renowned professors and scientists that are employed by the university, well-known politicians and artists often drop by for a talk, or sometimes just a tour.

One sight that is rarer is an entire professional sports team. On Monday and Tuesday, fans got to see just that as the English Premier League’s Chelsea FC trained on Harvard’s Ohiri Field.

The London-based club, one of the world’s most popular teams, spent two days training on Harvard’s campus in preparation for a friendly match on Wednesday at Gillette Stadium. The match will see them take on the New England Revolution, in Chelsea’s first friendly of the summer.

For Harvard sophomore Smit Chitre, the training session was a once in a lifetime opportunity.

“These are the players that I’m supporting day in day out, that I have supported for the past nine years,” Chitre said. “To see them with all these familiar sites in the background, to see them with Harvard Stadium, and Ohiri Field where we play IM games, to see these two elements of my world intersect is just surreal.”

Wednesday’s friendly isn’t the only way Chelsea is getting involved in America, as they recently completed the transfer of 20-year old American phenom Christian Pulisic from Germany’s Borussia Dortmund.

The winger’s $73 million transfer fee makes him the most expensive American soccer player of all time, and the club’s large American fanbase will surely be looking for the Hershey, Penn. native to make good on his chance with the Blues. Unfortunately for those fans, Pulisic did not travel with the team for Wednesday’s friendly.

Players took pictures and signed autographs on the field after training, rewarding fans who stood in the rain for hours to watch. Following the public training session, club chairman Bruce Buck and former manager Avram Grant took questions from the public at a Q&A event, talking about the role of sports in bringing people together, as well as their respective histories with the club.

The duo was joined by first-team players Cesar Azpilicueta and Olivier Giroud, who answered questions about Chelsea’s off-the-field initiatives, and their careers with the Blues.

“Education is the base to eradicate all discrimination in life and in football. We are lucky that football can move people.” Azpilicueta said. “We can teach a lot of people and they listen to us. We have to use the power of getting to millions of people in the right way.”

“Chelsea is one of the most active football clubs in the world doing campaigns. We participate in a lot of events and we are proud of it. We will keep going because there are still a lot of problems.”

The proceeds of Wednesday’s match, called the Final Whistle on Hate game, will be donated to a variety of charities which aim to combat anti-Semitism and increase tolerance. The match is just one of the ways Chelsea has expanded its role in the community in recent years, as they aim to positively change the image of the club.

Despite the club’s increased involvement with charitable initiatives aimed at fighting racism, the unsavory reputation held by their fans is proving hard to overcome.

Just this season, the team made headlines twice after racist chants targeting opposing players were heard in their stands. While events like the Final Whistle on Hate game help to bring awareness and funds to an important cause, the club has a long way to go given the recent actions of their fans.