Harvard’s gender and sex-based harassment policies hang in the balance. 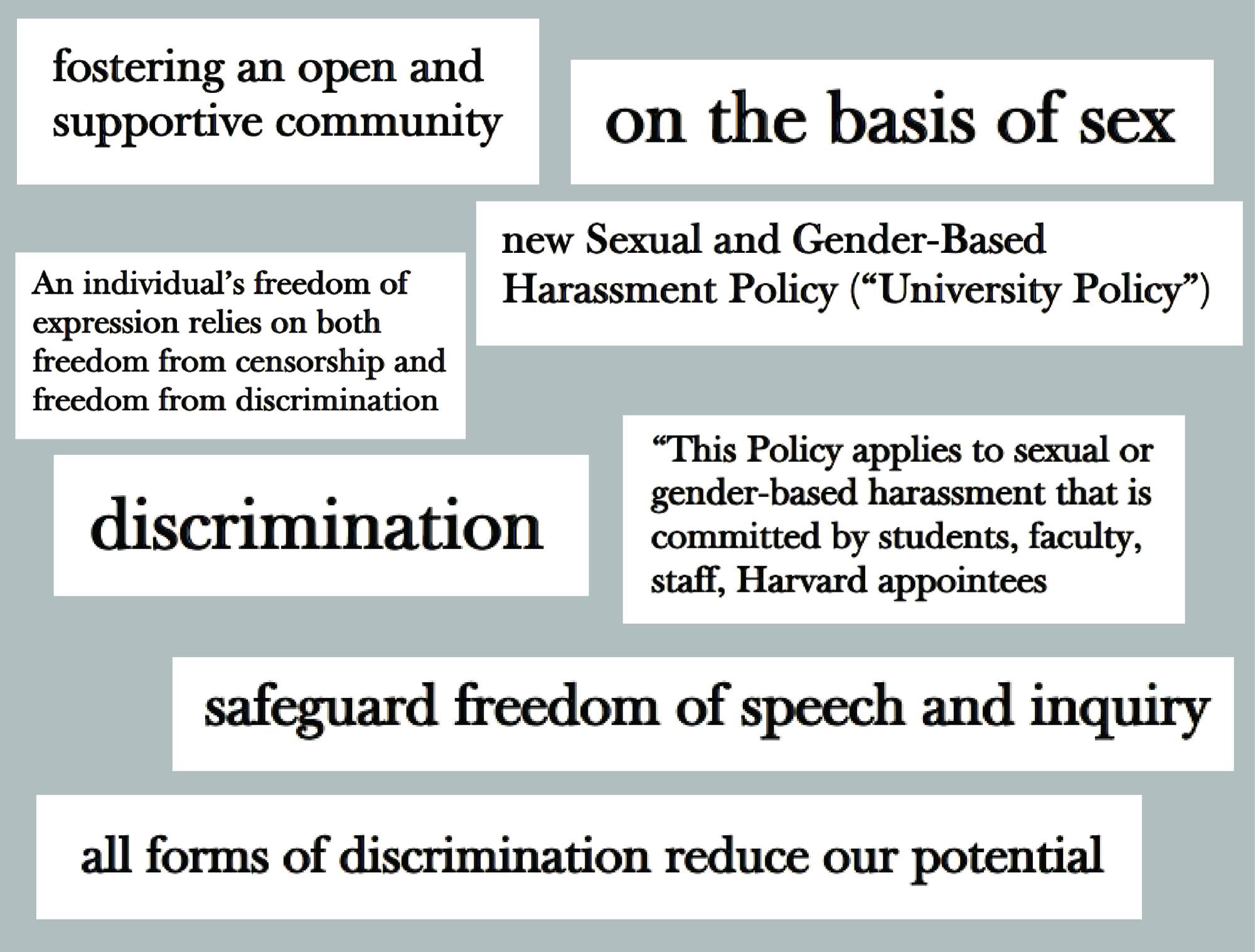 After years of adjusting its Title IX policies, procedures, and administrative infrastructure, Harvard’s system for preventing and addressing instances of sexual and gender-based harassment finally seemed to be laying down roots.

But in August 2018, new Title IX rules from United States Secretary of Education Betsy D. DeVos were leaked to the public, and the foundations of Harvard’s approach were once again in uncertain territory.

The rules officially released to the public in November confirmed initial reports and gave weight to speculations that Harvard’s policies would have to change once again in the near future.

Harvard unveiled its current system in 2014 as the University faced a federal probe into its Title IX compliance. Title IX, a law that prohibits discrimination on the basis of sex in educational institutions that receive federal funding, underpins universities’ sexual harassment prevention and adjudication policies across the country.

In addition to altering its policies and procedures, Harvard has extensively restructured the offices that oversee its compliance in recent years and instituted new training program. DeVos’s new rule, however, threatens to throw years of information gathering and implementation into limbo.

As the higher education world awaits final approval of the new rule, Harvard students and administrators have reflected on the long road to its current position and have grappled with the possibility of having to do it all over again.

Title IX, As It Stands

Before 2014, each of Harvard’s schools was left to its own devices to decide how it would comply with federal Title IX rules. In 2010, Harvard began reviewing the disparate policies across its schools and created a policy working group following the appointment of its first Title IX coordinator in 2013.

Just months after two students filed a complaint with the Department of Education’s Office for Civil Rights arguing that Harvard was not in compliance with Title IX, the University formed a central Title IX office and released its first universal set of policies and procedures for handling sexual misconduct allegations.

Those documents, however, did not settle the matter. Immediately after their release, professors at Harvard Law School launched a fervent campaign to craft a new policy according to their vision for adjudicating these types of cases. After a conflict involving memos and public letters, the University acquiesced and allowed the school to draft its own resolution procedure so long as it kept in line with the University-wide policy.

The universal policy is brief — only four pages — and comprises a policy statement, a series of definitions, and information about its jurisdiction and confidentiality rules. A set of FAQs issued in 2018 clarify the policy and address its application to various instances of misconduct.

Whereas Harvard’s policy document sets the rules for identifying sexual and gender-based harassment, its procedure documents lay out the processes for handling various types of complaints against students, faculty members, and staff.

Besides the Law School, every Harvard school uses the same basic procedures outlined by the Faculty of Arts and Sciences. The FAS uses a “single investigator model,” where an investigator in the Office for Dispute Resolution collects information from parties involved in a complaint and issues a verdict in the case. Once ODR — which is independent from the Title IX Office — has reached its conclusion, each school’s Administrative Board or equivalent body determines what sanctions may be necessary.

Sarah E. Wald, a Harvard Kennedy School Title IX coordinator, said she is “really happy” that ODR is a central investigatory body for students. The office employs trained professionals — not faculty or staff as can be the case at other institutions — according to Wald.

“It does take away at least the perception that there might be some favoritism,” Wald said.

The Law School, however, has a different investigative approach.

“It being a law school, they were very interested in doing a lot of that procedure themselves,” said Deputy Provost Margaret E. Newell, who oversees Title IX compliance at Harvard.

Following years of federal probes into its policies, the Law School sought to create its own procedures for adjudicating cases.

In investigations involving complaints between students, the Law School crafted a policy allowing a hearing process. The school also decided to provide funds for each party to access an attorney, and investigators give evidence to three neutral adjudicators who listen to both perspectives and issue a verdict.

Janet E. Halley, a Law School professor who led the criticisms against the University’s Title IX policy in 2014, said she and her colleagues took issue with the lack of a clause that requires a “reasonable person” to find misconduct disagreeable. She also took issue with Harvard’s definition of sexual harassment more broadly.

“The University presented a definition that takes some of those words [from federal legislation] — not all of them — drops them in a blender, whirls them up and then spills them out on the page in a pretty much random order,” Halley said. “It’s not a useful definition.”

Swain declined to comment on the University’s definition of sexual harassment.

In 2015, Harvard and the Department of Education signed off on the Law School’s procedures, setting it on its own course. These developments, however, were not the only changes to the system.

Two years later, in 2017, Harvard announced that it would split its Title IX Office and create ODR to investigate formal complaints of sexual misconduct. It appointed Nicole M. Merhill as its Title IX officer, and William “Bill” D. McCants as ODR director. 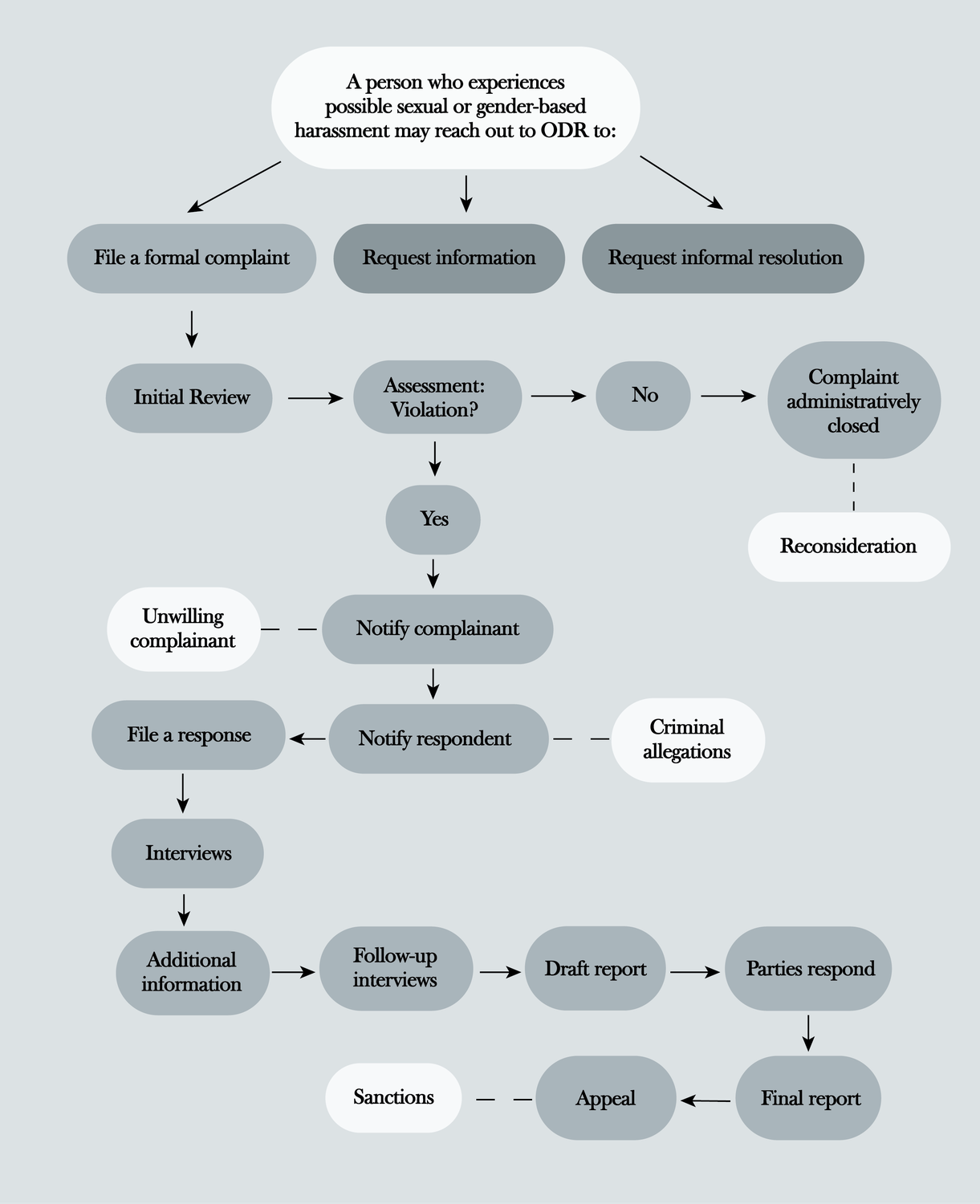 For instance, administrators said training and implementation must often take into account the unique demographic makeup of each school.

Because some of the Kennedy School’s international students “may not come from a culture where this is either talked about or where it's gotten as much attention,” its trainings include background information to better contextualize the law’s importance, according to Wald.

“Everybody here is interested in making the world a better place,” Wald said. “This is a public problem, and you're going to be public leader. So it's your responsibility.”

The Graduate School of Arts and Sciences has also made individualized efforts to combat sexual harassment on campus. The school has conducted its own mental health surveys — in collaboration with Harvard University Health Services — that include questions about sexual assault and sexual harassment, according to GSAS spokesperson Ann Hall.

Hall wrote in an email that findings from a 2015 sexual misconduct climate survey led GSAS to add a second Title IX coordinator to its student affairs team, develop a mandatory online training for students — launched before University-wide training was mandated — and create new workshops and targeted departmental trainings.

Newell said she believes that the differences between schools’ demographics result in different Title IX-related needs.

“The lifestyles and the age and the things to which students are exposed to is different in many cases,” Newell said. “So, if you had a residential situation, as you do in the College, people are spending all of their time together, they're at parties together, they socialize together. That's a lot different than people who come here and take a course, and leave and go back to a family someplace else.”

Despite the schools’ attempts to tailor their policies, students across campus said there is still room for growth — both at their specific schools and on a University-wide scale.

Sydnee Robinson, a law school student and organizer with the Law School’s Harassment Assault Law-Student Team, said she believes it is important that Harvard bolster campus resources dedicated to supporting survivors of sexual assault — like the Office of Sexual Assault Prevention and Response.

“I think that OSAPR is a really, really great resource, and should have way more funding and staffing than they do, especially given how much emotional labor is attached to these issues,” she said.

Some students said they are concerned about the culture surrounding gender-based harassment within their professional fields at large. Activists and organizers from both the Law School and the Kennedy School, in particular, spoke to the gender-based discrimination they feel is inherent to law and politics.

“It’s keeping women out of science, keeping people of color out of the law. It’s keeping all these people out of making real contributions to the world,” Kohnert-Yount said.

Evelyn Nam, a student at the Kennedy School, created a Gender-Based Violence Prevention and Outreach Committee through the school’s student government because she believed there was a need for more education in issues of gender-based violence.

“Gender-related things, particularly gender-based violence, are considered dangerous to talk about as they are political and divisive, so people don't talk about them,” Nam wrote in an email.

Through the committee’s work, she said she hopes to make these conversations more mainstream.

Despite years of honing Harvard’s policies and procedures into their current form, the DeVos rule has the power to significantly alter their course.

The new rule redefines sexual harassment, mandate live cross-examinations, and allow the discussion of investigation proceeding with outside parties. Harvard signed onto official comments on the DeVos rule during a public comment period citing concerns with these changes.

The comments — written by the Association of American Universities and Association of Independent Colleges and Universities in Massachusetts — specifically took issue with the aspects of the rule that they believe are not well-suited to university sexual misconduct adjudication proceedings.

Administrators, however, have refrained from offering individual comments on the policy and have declined to speculate on how Harvard’s policies might ultimately be affected. Though the 60-day period of public comment closed in February, the Department of Education received more 100,000 comments. Until the department finishes reviewing all of the comments, it is unable to put the rule into effect.

For now, Harvard’s policies hang in the balance, shifting priorities for some student activists that previously sought to push the University to further alter its policies according to their vision of best practices.

Remedy H. Ryan ’21, an organizer with anti-sexual assault advocacy group Our Harvard Can Do Better, said that while the group has advocated for policy changes — including a clause requiring affirmative consent — in the past, today it has a different focus.

“There's been a lot of attacks on Harvard's policy from Betsy DeVos’s rules and regulations,” Ryan said. “I think that our priority is definitely defending the policies that Harvard currently has.”