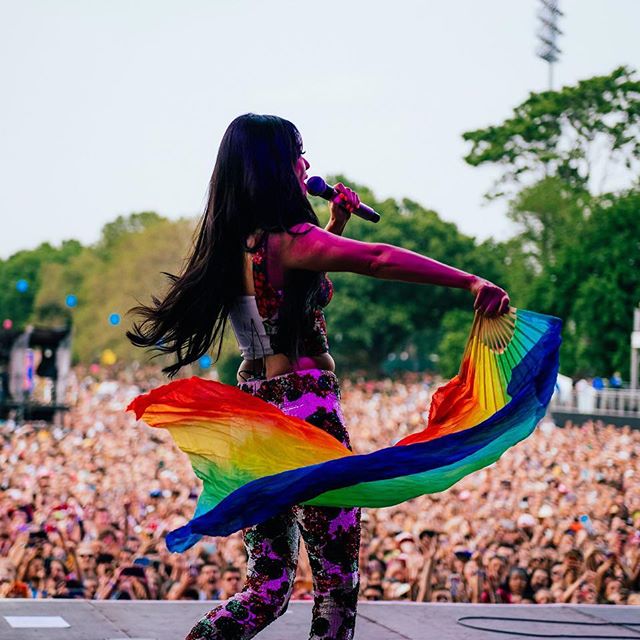 At the Grammy Awards this year, the up and coming Texas-bred singer Kacey Musgraves shocked many by taking home not just all of the night’s major country awards, but the coveted “Album of the Year” award for her most recent album “Golden Hour.” The first country artist to win both album of the year and country music album of the year since Taylor Swift nine years ago, Musgraves beat out nominees with greater name recognition — Drake, Cardi B, Janelle Monaé, and Post Malone, to name a few.

At this year’s Governors Ball music festival, many came to her Saturday set to see what all the buzz was about. Stretched out in front of the stage, despite the above average collection of bedazzled cowgirl hats, it was hardly a “country” crowd. It was Musgraves’ job, then, to win us over.

She started off not with a bang but a “Slow Burn,” a fitting name for the opener on “Golden Hour.” “Born in a hurry, always late, haven’t been early since ‘88,’” she crooned, the twang of her guitar floating beneath sweet and sincere self-deprecation. Her lyrics are witty and easy to remember, and some in the audience managed to sing back every line. Pointedly simple, the stripped-back number excited fans, even if it didn’t exactly fill the space.

After an understated opener, things started to ramp up to another song off “Golden Hour.” “Baby I ain’t Wonder Woman,” she repeated through the chorus, as audience members smiled and nodded along. After the first two songs, she paused to introduce herself and give a few instructions to the audience. “Give your neighbor a high five — now put two middle fingers in the air. Good, we’re ready!” she said with a side-eyed smile.

Kaleidoscopic flowers and insects cycled across the screen behind her as she launched into “Butterflies,” her biggest hit. “Golden Hour” is full of the triumphant simplicity of happiness, the little joys of a love that’s really working. “Now you're lifting me up 'stead of holding me down…” she sings, smiling, “you give me butterflies.”

Her second biggest hit is “Rainbow,” which she pulled out right before closing with the spunky “High Horse.” “Rainbow” is a very Kacey song — as she put it, it's dedicated “to [the LGBT] community, but also to anyone who has any kind of a weight on their shoulders,” epitomizing the double-edged sword that is her attempt to be a “rebel” but also appeal to everybody. “There’s always been a rainbow hanging over your head” seems the chorus of a born crowd-pleaser, not someone breaking the mold. It has little fresh or specific to say about life in general or the queer experience, instead opting for rain metaphors about cloudy skies and keeping your “head above water.” But even the simplicity of the “it gets better” anthem is a bold step forward for country music. In fact, it and previous songs like Kacey’s early hit “Follow Your Arrow” were banned from many radio stations simply for their acceptance of the LGBT community. It’s a testament to her character that this made Kacey even more bold in singing about her beliefs, rather than prompting her to cave for air time. Perhaps, the simple warmth she exudes is meaningful in its own way, albeit absent of specificity. As the breathy closer “it’ll all be alright” washed over the crowd, it was hard not to believe her — and maybe that simplicity is part of her magic.

She’s got a type of positivity that’s decidedly honest, not feeling the need to paint over every bad thing in order to recognize the good in the world. “Love is this little tiny thing that’s gonna find it’s way up through the cracks in the sidewalks,” she said as she introduced “Love is a Wild Thing.” Perhaps she’ll be the Taylor Swift who stays put, content in the warmth of the crowd and the sunlight of her imperfect Texas town — not desperate to keep evolving.

At a certain point, the way we evaluate music is inevitably arbitrary. Is “Golden Hour” the best album in the world? Probably not. Her songs sound like a sunny summary of the human experience, rather than the distillation of something fresh and personal. She enjoys being simple and classic, tying her act together in the ruby on her poppy-patterned pants, red nails, red lips, and red solo cups.

At the end of the day, Kacey Musgraves is just a girl with a guitar — but she sure will leave you with a smile on your face.