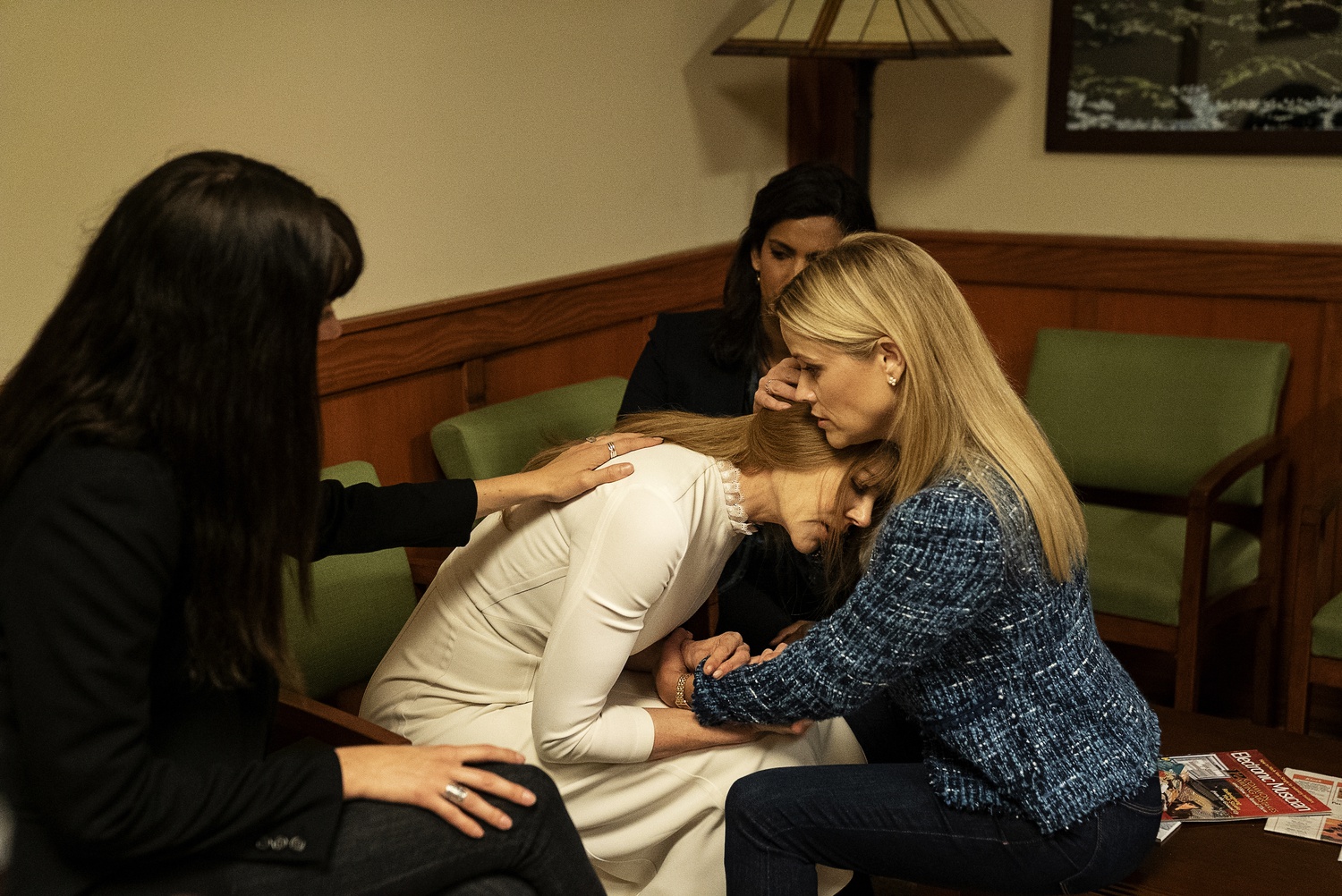 Forget “Kramer vs. Kramer”: The spiciest on-screen courtroom showdown is shaping up to be Kidman vs. Streep. In the penultimate episode of “Big Little Lies”’ second season, Celeste (Nicole Kidman) and Mary Louise (Meryl Streep) go head-to-head in a guardianship battle that exposes the most compromising sides of the former’s life, at the malicious behest of the latter. And all in front of Elle Woods herself!

But in “Big Little Lies,” it appears that the only thing being bent and snapped is the Monterey Five’s collective sanity. “It’s getting you to, isn’t it?” Bonnie (Zoe Kravitz) says knowingly to Madeline (Reese Witherspoon) in the hallways of the courtroom, before Celeste’s big trial. “It” — the lie, their guilt, their fraying allyship — is “getting to” everyone, most of all Celeste, whose fateful verdict rests in her courtroom demeanor. Her lawyer Katie (Poorna Jagannathan) has reminded her for two consecutive episodes that it’s imperative she remains neutral and not “erratic,” as Mary Louise’s lawyer is desperate to prove. (Somehow this is the only piece of advice Katie can give, after which she abandons her line of questioning after a single question! And then lets the judge take over entirely! Very cool lawyer Celeste has hired here.)

The women’s oath to protect each other has already begun to unravel, especially as the impending custody case has tested the limits of their allegiance to each other and to the lie that binds them. Their ad hoc friendship is not much more than a tenuous allyship, as Madeline lashes out at Bonnie during yet another emergency midnight beachside meeting. Yet, if not bosom friends, they must remain at least willing collaborators, given that the custody case (and, ahem, homicide case) literally depends on their ability to stay consistent: “With five witnesses, the odds are in her favor that one of you will finally crack. The first one who does, gets a break. The other four are fucked,” Corey (Douglas Smith) — who is only sort of a police informant! — explains Detective Quinlan’s strategy to Jane (Shailene Woodley).

Who will be the first to crack? Will it be Madeline, intent on using total transparency to repair her unstable marriage to Ed (Adam Scott), who contemplates cheating with Tori Bachman (Sarah Sokolovic), the wife of Madeline’s lover? Or perhaps Celeste, under duress at the witness stand? No, the likeliest informant is Bonnie, who’s already made several furtive trips to the police station out of guilt and moral duty. In this episode, she even pens a dark, introspective confession, admitting that she pushed Perry Wright partially out of resentment for her abusive mother. Elizabeth’s (Crystal Fox) violence has tinged every part of Bonnie’s life with trauma, from the way she sought out sex at an early age, to her settling for a husband she does not… (Here she trails off, but we get it: Nathan is a hard guy to love.) Bonnie’s monologue is a bit of needed development, for a laconic supporting character who has, up to now, preferred to linger in the background — albeit a character arc that disappointingly tends to rely on black stereotypes of abusive mothers and mystical powers.

While Bonnie delivers her rousing (dare I say, Emmy-worthy?) monologue to her comatose mother, Celeste faces suspicion at the witness stand, where Mary Louise’s lawyer attempts to weaponize her supposedly erratic behavior against her. In fact, he points out while clicking through damning slides, that swarthy tattooed bartender was not the only one of Celeste’s one-night escapades; there was Michael something, Brad from that one time, Bobby in that bathroom stall… The story gets complicated.

Except: Does it? Certainly a woman’s sexual life is not a relevant indicator of her parenting capability, beyond the lawyer’s need to slut-shame a woman for being an active agent of her own desire. Desire and motherhood are incompatible, his case insists. Good mothers are by nature unsexual beings! Mary Louise, nodding along in her cardigan and crucifix necklace, surely endorses the case. And for the show that swept the Golden Globes in the midst of black dresses and Time’s Up pins, it is no coincidence that its courtroom drama sequence would follow more or less the same lines of questioning as a sexual assault case. Was the sex that followed abuse ever gratifying, pleasurable? Why didn’t she ever go to the police? Why didn’t she tell anyone, until now? An undeniably upsetting interrogation is mired in victim-blaming, eliciting an all-too-familiar frustration at a court’s inability to put credence in a woman’s experience.

Here, the episode falls prey to a moral simplicity that undercuts the complexity and stakes absent from the season at large. Season One embraced an unwillingness to conform to easy moral dualisms of good and bad, to embrace the “irreducible ambiguities” (in Joan Didion’s words) of fiction. The courtroom drama unfolding in Season Two gives you the sense that “Big Little Lies” is perhaps worthy commentary, but unscintillating art.

Until Celeste turns the tables. To invoke an earlier Kidman-Streep collaboration, Mrs. Wright decided she would question the witness herself! With considerable legal expertise at hand, Celeste demands (against the advice of her lawyer and judge) to personally lead the examination of her mother-in-law. The next and last episode will likely reveal exactly what happened to Perry’s younger brother, whose untimely death was alluded to earlier this season. But most of all, it’ll provide the Celeste-as-a-lawyer content the show has promised from that phenomenal “Avenue Q” free speech defense in Season One. Here, head writer David E. Kelley has laid the groundwork for a shattering season finale, if not one that sees Kelley (the creator of legal dramas like “Ally McBeal” and “The Practice,” among many others) retreating into familiar territory.

Ordinarily, that would be all. End of recap. But it would be negligent to omit the controversy that has overshadowed this week’s episode. After critics have observed a certain disjointed editing quality all season, IndieWire reported earlier this week in a sourced article that director Andrea Arnold “lost creative control” after Season One director Jean-Marc Vallée returned somewhat unexpectedly to the show, imposing an aesthetic vision more closely hewn from the first season under his direction. It is the great irony of ironies that, in a show touted for its commitment to female art — featuring a roster of accomplished actresses, two of whom are credited as executive producers — male creatives would sideline a skilled female director. If true, that post-production dynamic would be a great disrespect to Arnold, whose immense and affecting filmography includes the likes of “American Honey” and “Fish Tank” — not to mention, a compromise in television quality, a great concession to banality. Fiction is laden with irreducible ambiguities. What’s the verdict on real life?