Speaker of the House of Commons John S. Bercow MP Addresses the IOP 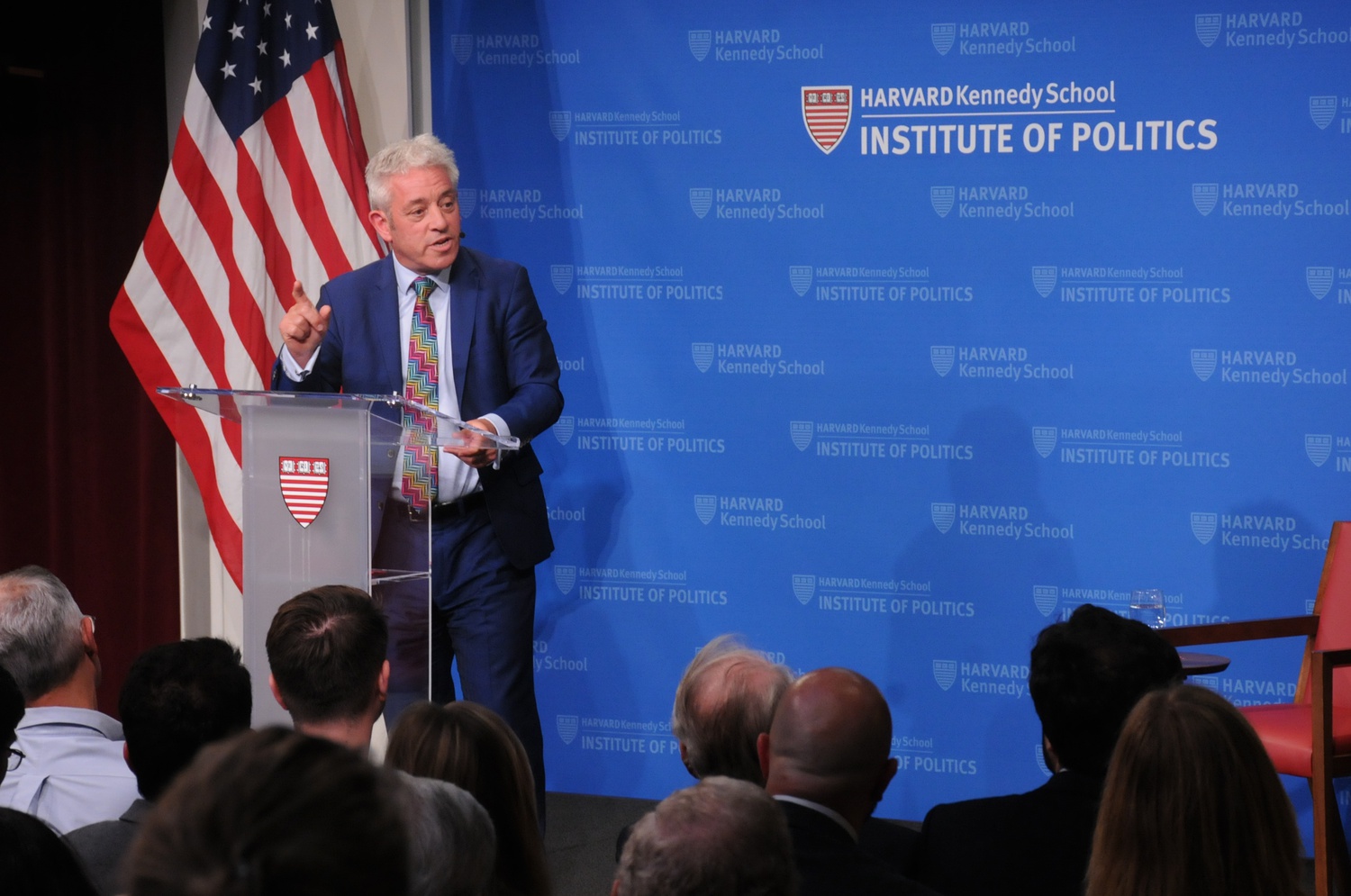 The Right Honorable John Bercow discussed his role as the speaker of the British House of Commons at a public address Monday evening. By Camille G. Caldera
By Isabel L. Isselbacher, Crimson Staff Writer

British Speaker of the House of Commons John S. Bercow delivered a public address on the state of British Parliament to a packed room at the Institute of Politics Monday.

The event was co-sponsored by the Project of the Transatlantic Relationship, an initiative that first launched at the Harvard Kennedy School in April 2018. Cathryn C. Ashbrook, the project’s executive director, moderated the discussion following Bercow’s speech.

In addition to inquiries about Brexit and his role in modernizing parliament, Bercow also fielded a question from visiting Graduate School of Arts and Sciences student Todd Gillespie about allegations of widespread bullying in the Brtish Parliament that were included in an October report. Bercow himself may face an investigation over historical complaints of bullying after an inquiry into the allegations found a culture of “deference, subservience, acquiescence and silence” in the British Parliament.

Bercow categorically denied all allegations of abusive conduct at the forum Monday.

“I totally and utterly refute any allegation against me of bullying. I have never bullied anyone, anywhere, in any way, at any time,” Bercow said. “What I have done is stand up for the rights of the House of Commons, champion the legislature, ensure that intimidation of those who want to speak their mind does not hold sway.”

During his tenure, Bercow — who has announced he will step down at the next election or in October — has asserted the need to protect the authority of the House of Commons while mitigating the growing influence of the government.

“People felt that Parliament had to change,” he said. “The power of government had increased and was continuing to increase, and in my judgement it had to be reduced or checked.”

“Too often there’s a mismatch between what we’re debating and what the public are thinking,” Bercow said. “What we need to do is to revive urgency and topicality.”

Bercow, who spoke of a “democratic renaissance,” touched on many of the other initiatives he has taken to revitalize and diversify the British Parliamentary system. Beyond appointing the first female Speaker’s chaplain, Bercow has also spearheaded efforts to construct a nursery at the Parliamentary Estate and build a civics education center at Westminster.

After the address concluded, the IOP posted a video of the talk to its website. Gillespie wrote in an email Monday night that the online recording cut out for a portion of his question, during which he had detailed some of the harassment allegations against Bercow.

When asked about the missing portion of the recording, IOP Commuications Director Kelsey A. Donohue wrote in an email Monday night that it was “completely unintentional.”

“No one from our team knows the source of the glitch,” she wrote. “We’ve reached out to HKS Media Services to repair the footage but they likely won’t be able to adjust until the a.m.”

“I think he showed how democracy should work and how we can aim to fix it,” Our said. “And that his role is not to take a side but to protect the institutions that we value.”