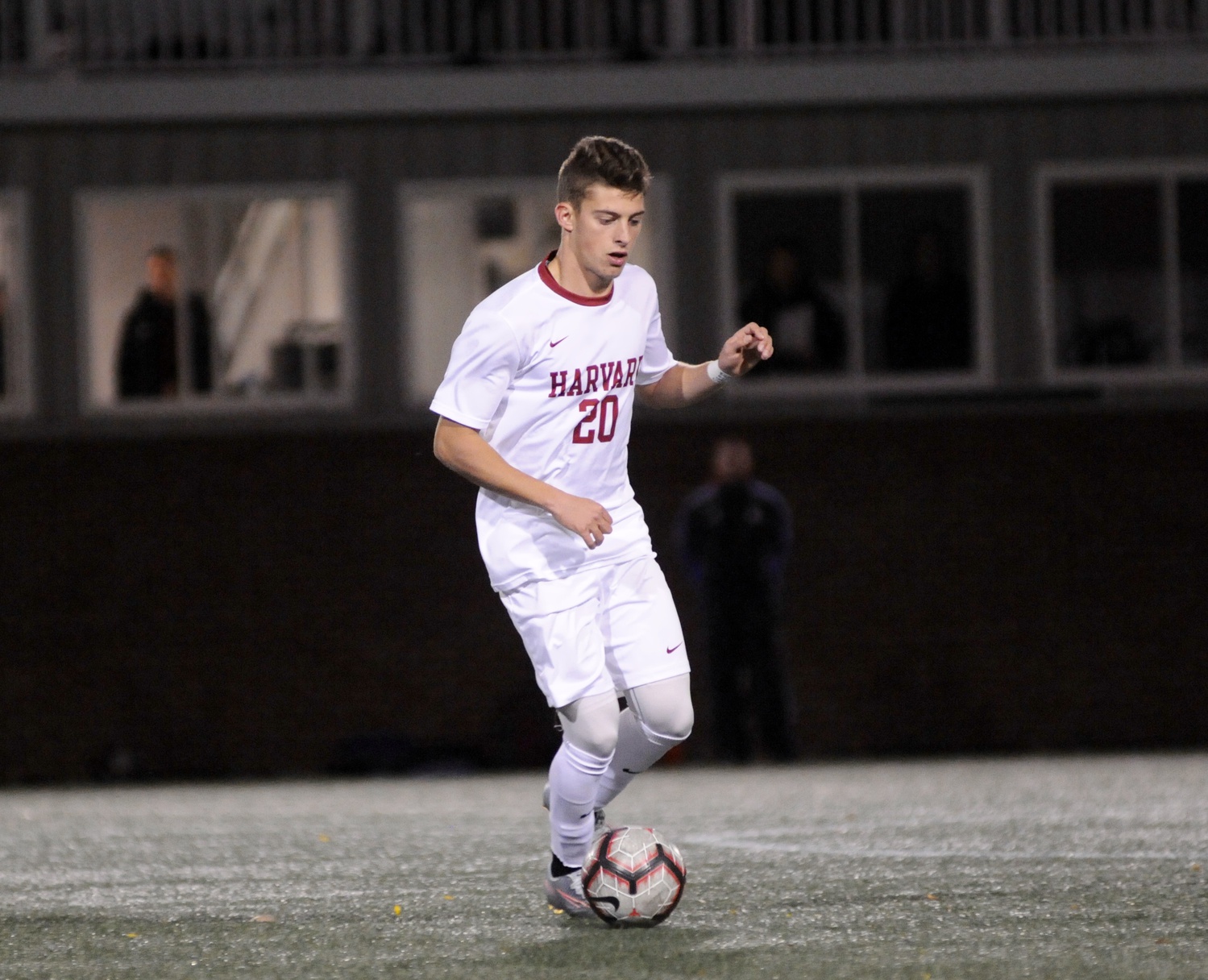 Junior Fernando Docters dribbles carefully upfield in a previous contest. The third year aided the Crimson’s first goal of the season this weekend in an assist to sophomore Alfred Perez against Vermont. By Henry Zhu
By Eamon J. McLoughlin, Crimson Staff Writer

Coming off of an opening weekend which may have seen it play its two strongest opponents of the season, Harvard (0-4-0) rounded out its opening string of away games over this past weekend. The Crimson fell to Vermont (3-3-0) by a score of 4-2 on Friday before dropping a 1-0 decision to Providence (4-2-0) on Monday night.

Harvard traveled down to Providence on Monday for a rematch of its 2018 home opener, which ended 2-1 in the Crimson’s favor. Things were tougher for Harvard this season, as a 21’ goal from Providence’s Tiago Mendonca ended up being the difference in the back and forth affair.

“We gave a strong effort and had our chances but unfortunately lost a close contest,” said junior midfielder Sebastian Lindner-Liaw. “We’ll regroup and start preparing for our home opener next Tuesday.”

The result, while far from ideal from the Crimson’s point of view, shows that progress is being made by the team this season. The team showed signs of promise, registering three shots on goal, and at least a couple of chances to come away with a tie.

Harvard has been experimenting with its lineup throughout the start of the season, and Monday night’s game was no exception. First year goalkeeper Oskar Nilsson played his first minutes of his career for the Crimson, registering six saves in a full ninety minutes.

Nilsson is a member of the small army of six goalkeepers currently on the Harvard roster. Following the departure of would-be junior goalkeeper Matt Freese over the summer, who now plays for the Philadelphia Union in Major League Soccer, the Crimson has been looking to replace his spot in the net.

While fellow first year Bobby Harraka has the most minutes of the six goalkeepers so far, tonight’s team selection makes it seem that the goalkeeping position is still open for the taking.

First year forward Duncan Sutherland also made his career debut on the night, playing about 40 minutes up top and registering a single shot for Harvard.

Harvard scored its first goals of the season on Friday night, but was not able to pull out its first result, as it fell 4-2 in Vermont.

The game was one of multiple momentum shifts, with neither team putting the other out of reach until the very end. Vermont took a 2-0 lead in the first half, scoring through a well-executed set piece and a looping cross, but the Crimson was not deterred. While Vermont maintained some control through the rest of the half, the game was far from over.

Just seconds into the second half, Harvard got on the board for the first time this season through sophomore forward Alfred Perez. Perez grabbed his fourth career goal for the Crimson, with it coming off of a cross from junior midfielder Fernando Docters less than a minute into the second half.

As the saying goes, goals change games, and this goal did just that. With the Crimson continuing to commit players forward, Vermont began to sit back, allowing pressure from Harvard. This paid off, when in the 61st minute, it scored on a breakaway to go ahead 3-1.

Harvard again slimmed the margin to a single goal in the 71st minute through first year forward Martin Vician. The Bratislava, Slovakia native got on the end of a free kick from fellow first year midfielder Willem Ebbinge. With 20 minutes to go, the Crimson was again within touching distance.

Dreams of a first win coming through a dramatic comeback were shattered when Vermont tallied a fourth goal just a couple minutes later to pull ahead 4-2. Although Harvard did not give up after this goal, it did not have enough remaining in the tank to pull out a result.

Bobby Harraka racked up nine saves on the night for the Crimson, which put his season tally at an Ivy League-leading 24. While he did not get the nod for Monday’s game in Providence, he continued to make a case for himself between the sticks with his performance on Friday.

Although the road trip was not kind to Harvard, the team will have ample time to rest and prepare for its next outing. The Crimson will finally get to play in front of its home fans next week, as it hosts Merrimack in its home opener on Tuesday at 7 p.m. on Jordan Field.