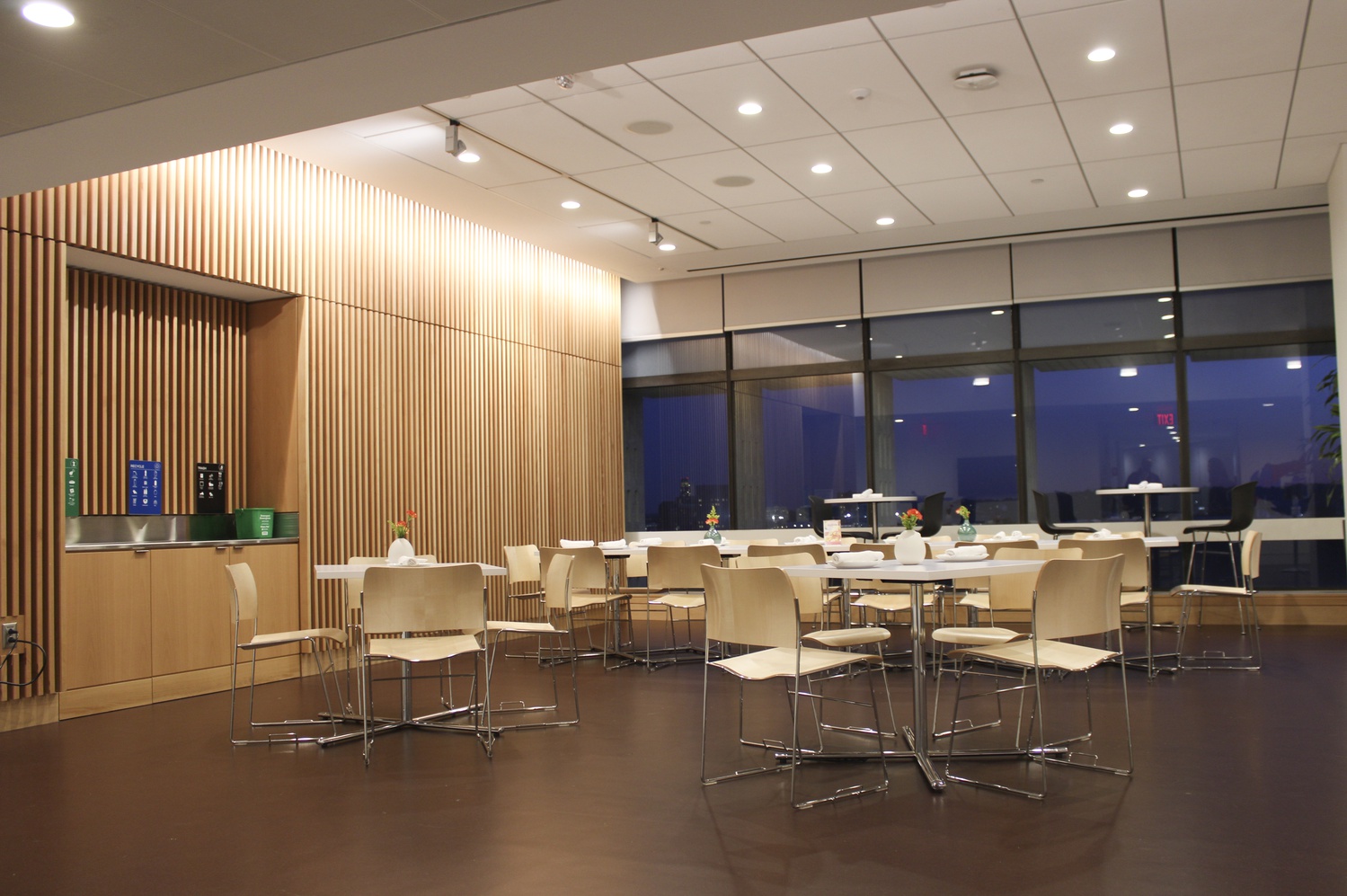 Student body presidents from each of Harvard's graduate schools convened in The Heights restaurant on the 10th floor of the Smith Campus Center Thursday. By Shera S. Avi-Yonah
By Luke A. Williams, Crimson Staff Writer

The meeting also covered diversity and inclusion grievance processes, lactation room standardization, and transportation to the new Allston campus. Bryan O. Buckley, president of the HGC — an umbrella student government with members from all twelve graduate schools —, convened the presidents as an effort to revitalize the meeting. Previously, Presidents’ Circle meetings had been held sporadically, but Buckley said he would ensure they happened every semester in the future.

The regular meeting schedule is part of Buckley’s mission to increase collaboration among graduate students.

Zachary M. Hayworth, president of the Graduate School of Arts and Sciences’ Graduate Student Council, advocated at the meeting that the HGC create a graduate student union liaison position to facilitate communication between the two organizations. He also suggested that the other graduate student councils cooperate with the union on some level.

Elected in the spring, Hayworth’s executive board is the first among the 12 graduate school student governments to explicitly cooperate with the union on advocacy opportunities. The GSC has already created a union liaison position.

“It’s a matter of how long until the union has a contract. I think it’s in all graduate students’ best interest that the union gets a contract as soon as possible. That’s the point of the cooperation. It’s not a matter of being pro- or anti-union,” Hayworth said.

Buckley said he agrees that graduate students should cooperate with the union. He added that HGC met with the union over the summer to explore possible collaborations and disagreements between the two groups.

The group also discussed differing grievance processes across the University and how they could standardize the procedures.

“Some of the issues were around diversity and inclusion, specifically a grievance process, which the College actually has already,” Buckley said. “How can we have a more systematic way of doing that at the graduate schools, when a student feels discrimination happening because of a faculty member?”

Buckley said the presidents suggested creating a standardized grievance procedure framework based on previous policies and experiences across the schools.

The issue of lactation room disparities also came up at Thursday’s meeting. Though each of the graduate schools houses lactation rooms, the reservation procedures, availability, and quality of equipment vary from school to school. During her tenure, former GSC President Blakely O’Connor spearheaded the standardization of lactation room policies and equipment across campus — an effort now taken up by Hayworth and the Harvard Office of Work/Life.

“We were talking about, ‘Do you have a changing table in the men’s bathroom? Do you not? Does the lactation room have pumps? Does it not have pumps?’ None of the rules are standard like that, things that should probably be essential,” Buckley said.

The group also discussed transportation issues that could arise when the University opens its new School of Engineering and Applied Sciences campus in Allston. Buckley said some presidents are concerned graduate students may find it harder to move between schools for class as Harvard’s campus grows.

“As we think about the Allston campus, the M2, how do we have students that want to cross-register across all these different schools, and if there is even a simple way to actually get to all these schools.” Buckley said.