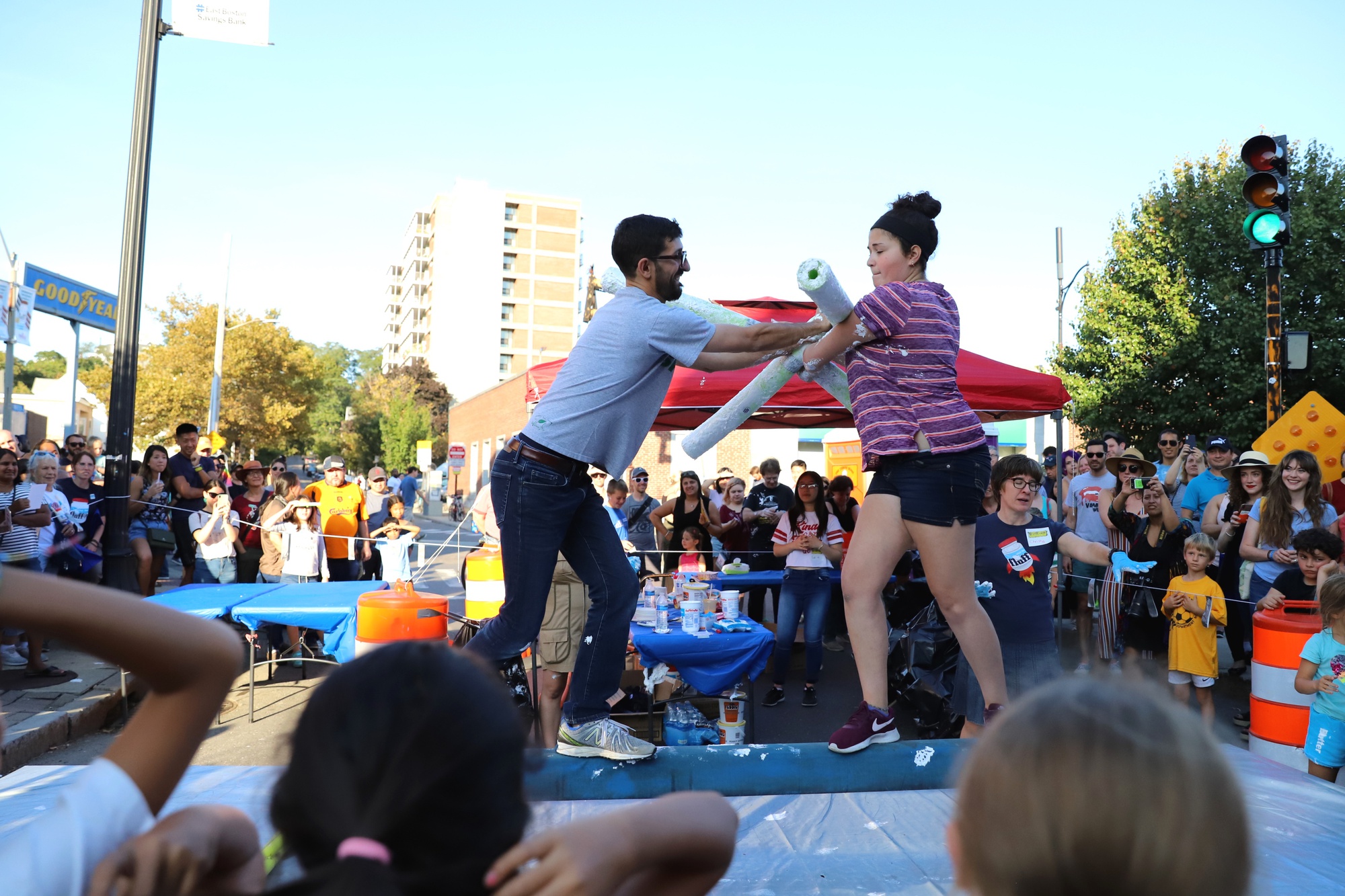 Fluff jousting, a game involving people balancing on a balance beam while hitting each other with Fluff-covered pool noodles, was one of the games held at the "Dept. of Shenanigans Stage."
Advertisement
Advertisement

All Roads Lead to Fluff

The “What the Fluff” festival, jointly organized by Union Square Main Streets and the Somerville Arts Council, celebrates the creation of marshmallow fluff, which turns 102 this year.
By Jane Z. Li

At 4:45 p.m., I step onto a barricaded street and shoulder my way through a large crowd of marshmallow enthusiasts. I’m surrounded by parents ushering their children to the front of a stage, young couples feeding each other marshmallow pops and “fluff” empanadas, and clusters of teens giggling as the sticky treat adheres to the corners of their mouths.

Next to him, two boys circle a chair covered with a black trash bag. The chair’s seat is slathered in marshmallow fluff, and the boys’ clothes have already been stained white by the sticky spread –– they’ve clearly braved several rounds to make it to the final showdown.

The music stops, and one boy falls into the seat, raising his arms in victory.

The crowd cheers. As he tries to rise from the chair, the fluff on the back of his pants tugs him back down.

The “What the Fluff” festival, jointly organized by Union Square Main Streets and the Somerville Arts Council, celebrates the creation of marshmallow fluff, which turns 102 this year.

Archibald Query invented the treat in 1917 at his home in Somerville. After peddling his invention door-to-door for three years, Query finally sold the product to the Durkee-Mower Company in 1920 after sugar shortages in World War I hindered his personal fluff production.

Today, Query’s name and creation live on via the Fluff Festival. This is the fourteenth year the Union Square community has celebrated his innovative dessert. But to Jessica L. Eshleman, Union Square Main Streets’s executive director, it’s more broadly a celebration of the square’s spirit.

“Mayor Curtatone has been saying for many, many years: ‘Our freaks are better than your freaks,’” Eshleman says. “And I think people who choose to move here, who choose to live in the densest city in New England, who choose to live under the construction and all the things that are Union Square — we embrace that.”

Marshmallow fluff isn’t a cultural phenomenon confined to Somerville, however. It’s the defining ingredient in the fluffernutter sandwich, a Massachusetts staple composed of white bread, peanut butter, and fluff that nearly became the official state sandwich in 2009. It even has its own holiday –– October 8 is National Fluffernutter Day.

However, the sandwich has endured its fair share of controversy. In 2006, then-State Senator Jarrett T. Barrios attempted to ban fluffernutters from public schools after learning that his son had been served the treat at his elementary school. Eshleman says the decision to celebrate fluff in the face of this pushback illustrates “the Union Square brand.”

“It’s not the most healthy, nobody can contest that… [but] the spirit of Union Square [is] really exemplified by taking controversy over a peanut butter and fluff sandwich and turning it into 20,000 people having a really amazing and memorable time.” 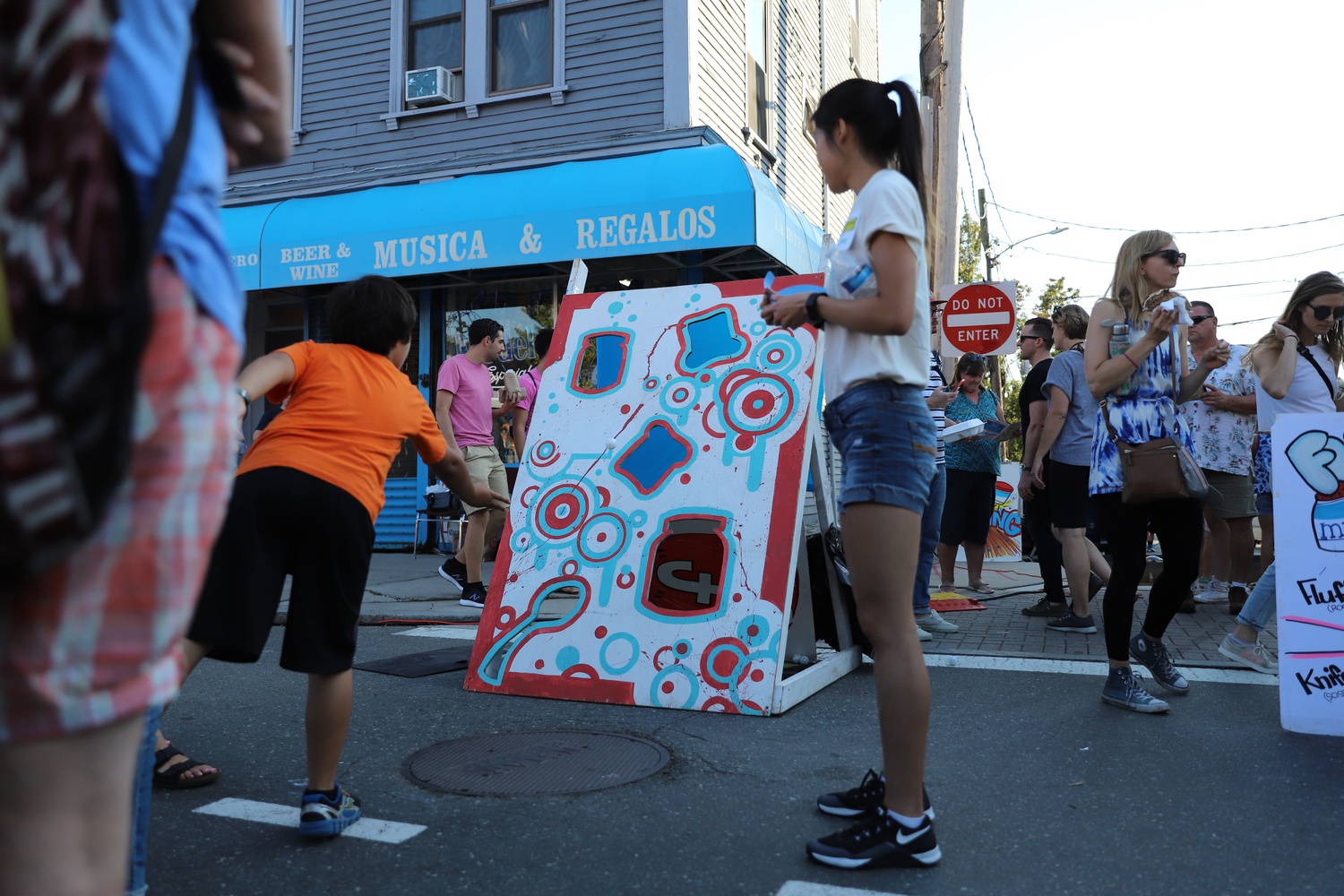 Somerville Avenue is lined with local restaurant vendors, and the air is filled with the competing aromas of curry, barbequed meat, and shumai. The array of international cuisines aligns with this year’s theme of “All Roads Lead to Fluff” — an attempt, according to the festival’s website, to celebrate the “culturally rich” city of Somerville, “paying homage to the many roads traveled to Union Square from all over the world.”

Live music mingles with cries of “Fluffernutters! Get your fluffernutters here! One for three, two for five!” Trios of students weave through the throngs of people crawling down the street. Vendors lug boxes laden with the coveted fluffernutter sandwiches. I finally cave and purchase one. ‘For later,’ I tell myself.

I break through the crowd to find the second, main stage — better known to festival-goers as the Fluff’n Jam Stage. Various acts rotate throughout the afternoon, including the Julia Bomfim Brazilian Quartet, the Flufferettes, and most intriguing to me, Keytar Bear: a man dressed in a bear costume and a Red Sox jersey whose instrument of choice is the keytar.

While I’ve unfortunately missed Keytar Bear’s performance, I’m just in time for the announcement of the cooking contest winners. Participants compete for the title of either Most Innovative Recipe, Most Retro Recipe, Best Future Chef, and Best Chef Overall. Christina M. McNeil claimed the Most Innovative Recipe award with her S’more Babka, which infused fluff and graham crackers into a chocolate swirl.

“This is my third or fourth time [participating],” she explains as she shows me pictures of the prized bread on her phone. When I ask her what keeps bringing her back to the festival, her response is quick: “The contest! I have to defend my title.”

Although McNeil is a longtime resident of Somerville, the same enthusiasm extends to newer members of the community. Tess R. Ruderman, a newcomer to Union Square, enjoys the excitement the festival brings.

“It’s nice to bring a s’mores vibe to your everyday life,” she says. “You don’t have to be in the woods to eat a marshmallow.” 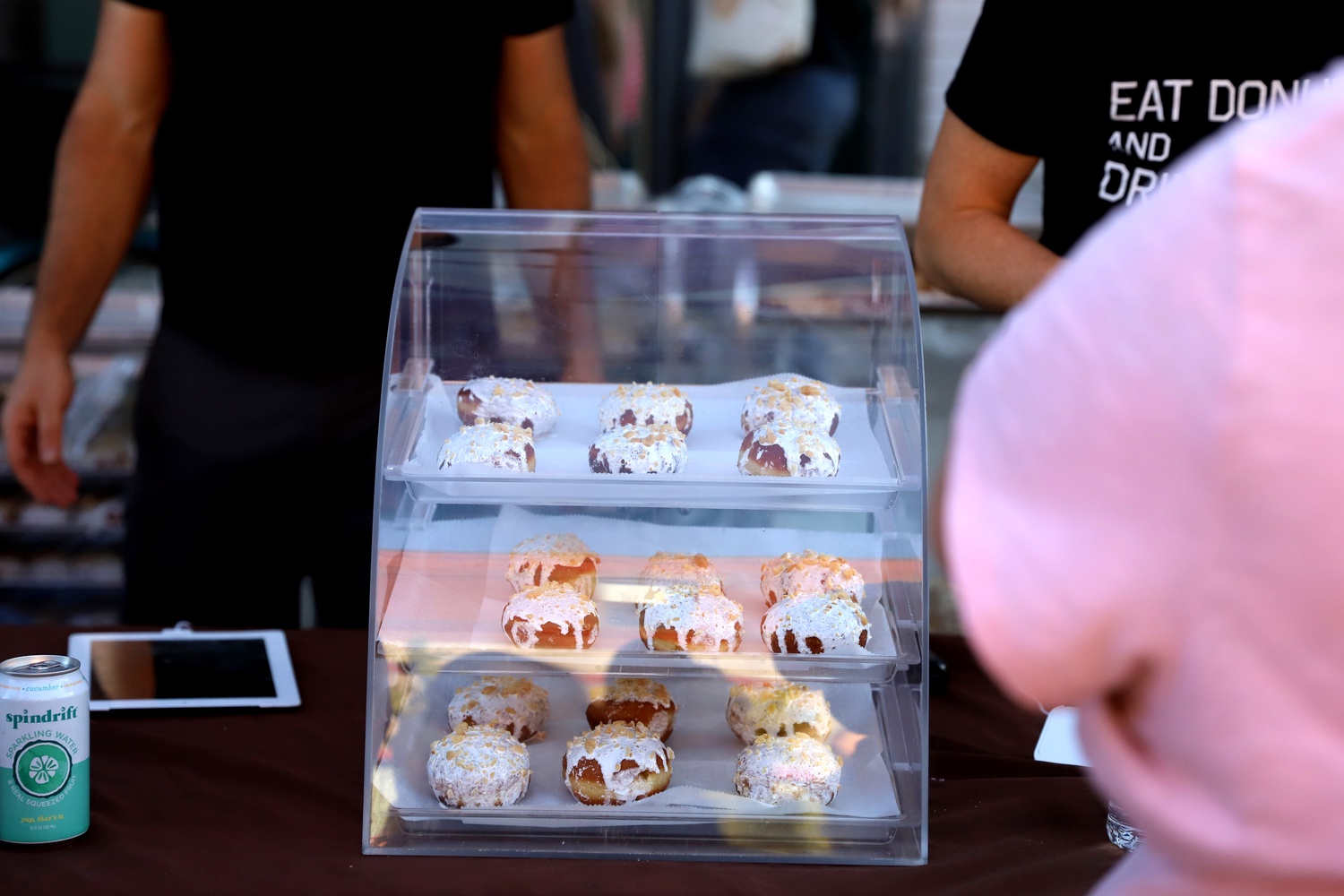 Union Square Donuts was one of the vendors offering Fluff-filled sweets at the street festival. By Kathryn S. Kuhar

Later that night, I unpack my backpack and realize that I have forgotten about the fluffernutter I purchased earlier. As I tear open the Ziploc bag, I realize how excited I am to finally experience the treat that’s such a source of pride for the people I met in Union Square. I take my first bite, and what I encounter is salty, sweet, and honestly, a little underwhelming. After all, it’s just white bread, peanut butter, and marshmallow fluff.

Under other circumstances, I might not have been so enthused. But maybe that’s all that needs to be said about the Fluff Festival’s charm.