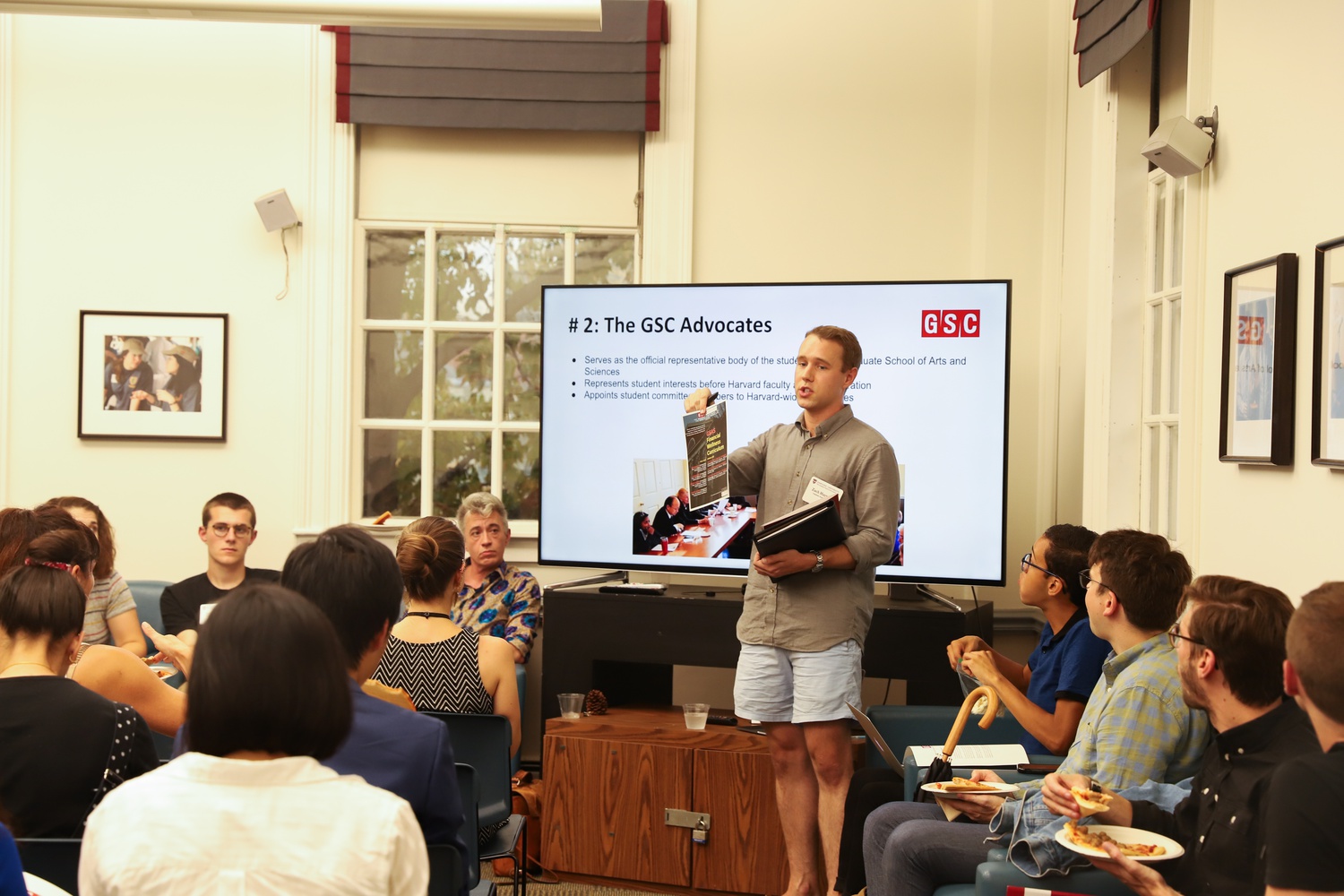 Zachary M. Hayworth, president of the Graduate Student Council, opens up the first GSC meeting of the semester. By Amanda Y. Su
By Luke A. Williams, Crimson Staff Writer

The Graduate School of Arts and Sciences’ Graduate Student Council announced its support for the Office of Student Services’ new online student group database at its first open meeting of the semester Wednesday night.

New this semester, the database — dubbed “Engage” — features all GSAS student group information on one website, hosting everything from club membership lists and events, to grant application forms and club renewal documents.

Office of Student Services Program Coordinator Janet Daniels spoke at Wednesday’s meeting, saying that her office hopes Engage will connect all student leaders in “one spot and one calendar.”

“Engage is a student leadership platform, a student engagement platform,” Daniels said. “No matter what campus you’re on, you can see what’s going on.”

Daniels touted the database’s back-end capability so that student group leaders can personalize their club’s profiles, news posts, and available information. Not all student groups are currently on the platform as the office hopes to stagger their integration throughout the semester.

“Right now the graduate student leaders and the GSAS Student Center Fellows are on Engage,” Daniels said. “We’re going to bring in residential life, then the Office of Minority Affairs and Diversity and Inclusion Fellows, then the departmental graduate student group organizations in October.”

Near the start of the meeting, GSC President Zachary M. Hayworth presented a graphic last used during the spring semester’s push for union-GSC cooperation. The graphic demonstrates the overlapping GSC and union constituencies, and Hayworth was quick to mention the two groups’ shared duties.

The GSC also elected four new members to its executive board Wednesday night.

Brian Park and Rebecca A. Stern were unanimously voted to serve as at-large representatives for masters students and for the School of Engineering and Applied Sciences, respectively. Elizabeth W. Tarbell was elected to serve as the GSC’s parliamentarian.

The GSC concluded its meeting by unanimously approving its budget for the 2020 fiscal year — $160,424 total. The council will allocate $48,000 to student research grants and $56,500 to student-group funding.