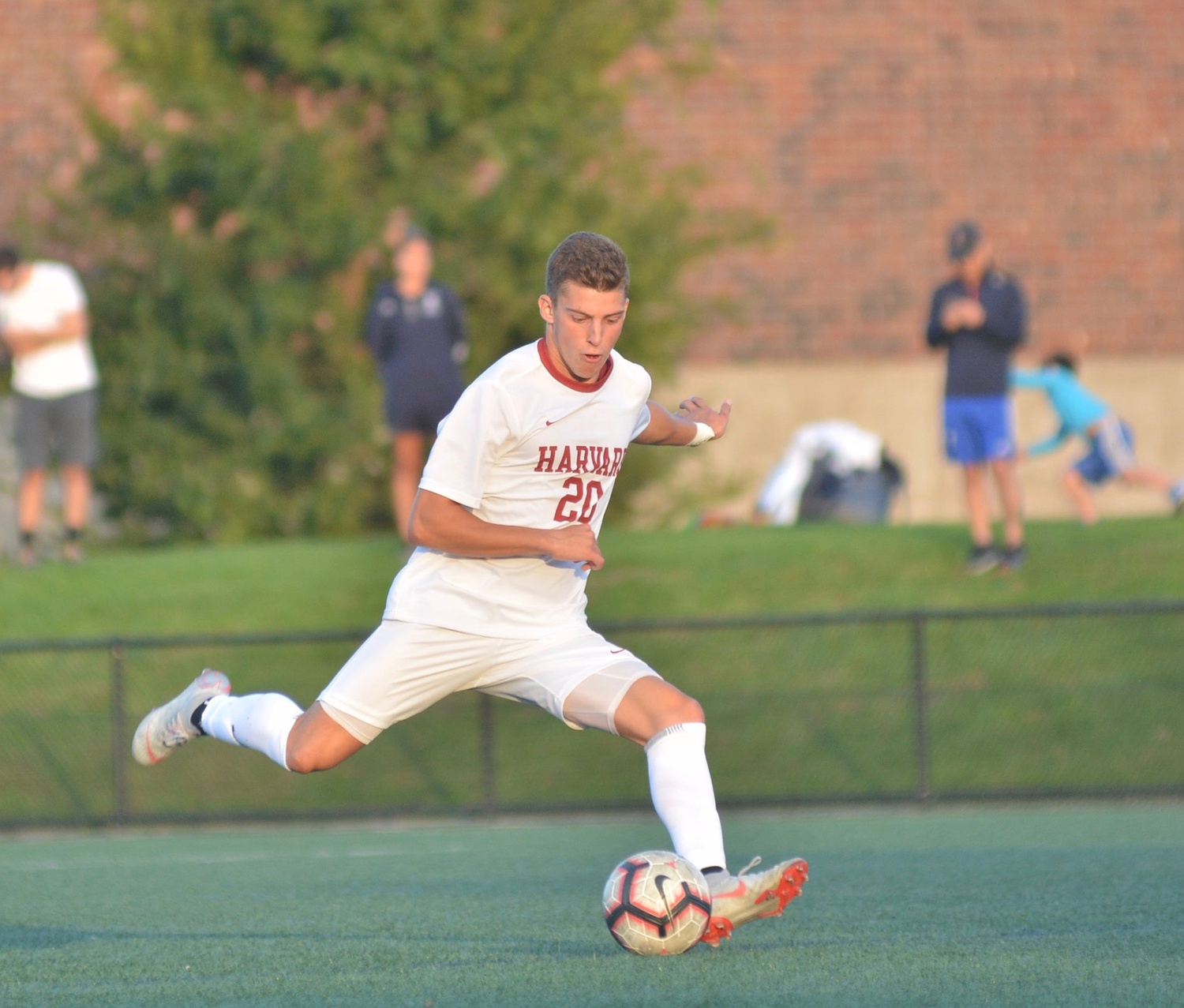 Men's Soccer during a game against Yale in 2018. By Henry Zhu
By Eamon J. McLoughlin, Crimson Staff Writer

Defending Ivy League champions Princeton remain the side to beat in the Ancient Eight heading into the 2019 season. With eight starters out of eleving returning, including seven All-Ivy Selections, it’s going to take some doing to dethrone the Tigers. Led by 2018 Ivy League Offensive Player of the Year Kevin O’Toole, Princeton boasts some real firepower up top. Despite these positive signs, the Tigers remain mortal. Last year, Princeton came within inches of choking away their Ivy League title on the last day, as it lost 1-0 to eventually fifth-placed Yale. Cornell’s defeat of Columbia in overtime allowed Princeton to clinch anyway, but the episode showed the extremely open nature of the Ivy League.
Prediction: 1st (Followed by a first round exit in NCAA Tournament)

Dartmouth finished third in the Ivy League last season, but its season was marked by stretches of hot and cold. Dartmouth took seven games to record their first victory, but made up for it by immediately going on a seven game win streak. With four All-Ivy selections returning, Dartmouth look good on paper, but are set to face three ranked opponents in their first four games, including opening day at No. 1 Wake Forest. If it can compete during this tough start, the Big Green might give Princeton a real run for its money later on in the season.
Prediction: 2nd

Cornell look strong coming into 2019, as four All-Ivy picks return to Ithaca for the upcoming season. While its eleven wins overall in 2018 was the most of any team in the Ivy League, it had its lapses, such as its 1-0 loss to Yale in October. While the Big Red has steadily improved for the last three seasons, it retains five seniors from the 2016 team that went 1-14-2. Although the program’s turnaround has been remarkable overall, this may be the season where continued improvement requires a real step up.
Prediction: 3rd

To the untrained eye, Harvard’s 2018 season was a pretty clear disappointment. Its 3-13, 1-6 Ivy League record was far from impressive. But sometimes the record doesn’t tell the whole story. Harvard went toe to toe with nationally ranked programs almost every time it matched up against them. The Crimson dominated the opening 20 minutes against No. 22 UMass in a 2-0 loss in September, while their 4-2 loss vs. No. 24 Cornell in October was a highly back and forth affair. A 3-minute lapse in concentration cost Harvard two goals, and the game, vs No. 5 Denver in a 3-1 loss. While its Ivy League performance was somewhat lackluster, the Crimson beat Yale, who was the only Ivy League team to beat champions Princeton. And despite losing thirteen games, only three of these losses were by more than two goals. Small improvements might make a huge impact for a team which seemed to come so close in almost every game last season.

Harvard enters the 2019 season with an almost entirely new look and feel from that of last season. With only 13 players returning to the 25 man roster, there is a lot of room for change for the Crimson. The team will undoubtedly suffer from the loss of midfielder Sam Brown, and goalkeeper Matt Freese, who are both trying their luck in the MLS, as well as midfielder Paolo Belloni-Urso, who is taking a year off. To offset these big losses, Harvard has brought in some exciting talent. First-year midfielder Willem Ebbinge of New Zealand may prove to be a huge boost to Harvard’s midfield in the long-term. The Queensland native is the youngest ever player to appear for the Wellington Phoenix, who play in the Australian First Division, and has represented his country at multiple youth levels, including at the U-20 World Cup. The middle of the park will be further bolstered through the return of midfielder Cornelius Bencsik, who also boasts top-division experience, his coming in the Norwegian First Division. Bencsik returns to Harvard for his second season after playing abroad in 2018, and will help to balance out the loss of Brown and Belloni-Urso. Harvard has also added a forward with international experience, as first year Martin Vician joins the front line for Harvard. The Bratislava, Slovakia native spent nine years in the youth academy of SK Slovan Bratislava, Slovakia’s most successful club, in his time before Harvard. He has also represented Slovakia at the U17 and U19 levels. Harvard has brought in eight other first-years, including three goalkeepers, and will have plenty of options to experiment with as the season moves forward. If Harvard can click, it will be able to cause problems for anyone in the Ivy League, and maybe anyone in the country.
Prediction: 4th

While Colombia had a strong season last year, coming within inches of stealing the Ivy League title from Princeton on the last day, there is reason to believe that this season will be a different story. Columbia enter 2019 without three-time All-Ivy League goalkeeper and 2018 Ivy League Defensive Player of the Year, Dylan Castanheira. Castanheira makes a case for the Ivy League’s best ever goalkeeper, holding the record for the best career goals against average, (0.513) as well as Columbia’s all-time shutout record (25.) Losing a superstar is always tough, but the loss of a goalkeeper who has led the program for four years might prove to be catastrophic for Columbia.
Prediction: 5th

Yale enters 2019 as a huge question mark. While it punched above its weight at times, handing Princeton its only conference loss and downing Cornell, its big wins were offset by big losses, namely to Harvard and Brown. Yale will suffer from the loss of first team All-Ivy midfielder Nicky Downs, although Second Team All-Ivy forward Paolo Carroll will continue to be a menace for opposing defences. Although the program has improved every year in recent memory, Yale’s 7-6-3 overall record was their best since 2011, which isn’t great. Though some signs are there, Yale seems too inconsistent to cause any real trouble.
Prediction: 6th

With only two All-Ivy’s returning, Penn look to be in about the same spot it was in last season. The Quakers did not win a conference game in 90 minutes last year, as both of its conference wins came in double overtime. While its strongest asset was its defense, Penn struggled to score when it mattered. Despite this strong defense being bolstered by the return of All-Ivy First Team Alex Touche, the offense doesn’t look like it has improved enough to carry Penn to any significant success in 2019.
Prediction: 7th

Coming in last is Brown, whos decent 8-8-1 overall record in 2018 was negated by its poor 2-5-0 Ivy League record. With two All-Ivy selections returning, the Bears might challenge for the middle of the table, but mid-low looks more likely. Their only conference wins in 2018 came against Harvard and Yale, the latter being when both teams were out of tournament contention. While Brown added some talent, it lost their rock in defense, Second Team All-Ivy Gabe Welp, and unless it can make up for this loss, there is a tough season ahead.
Prediction: 8th