A Dark Blot in Harvard Square: Black Ink to Close 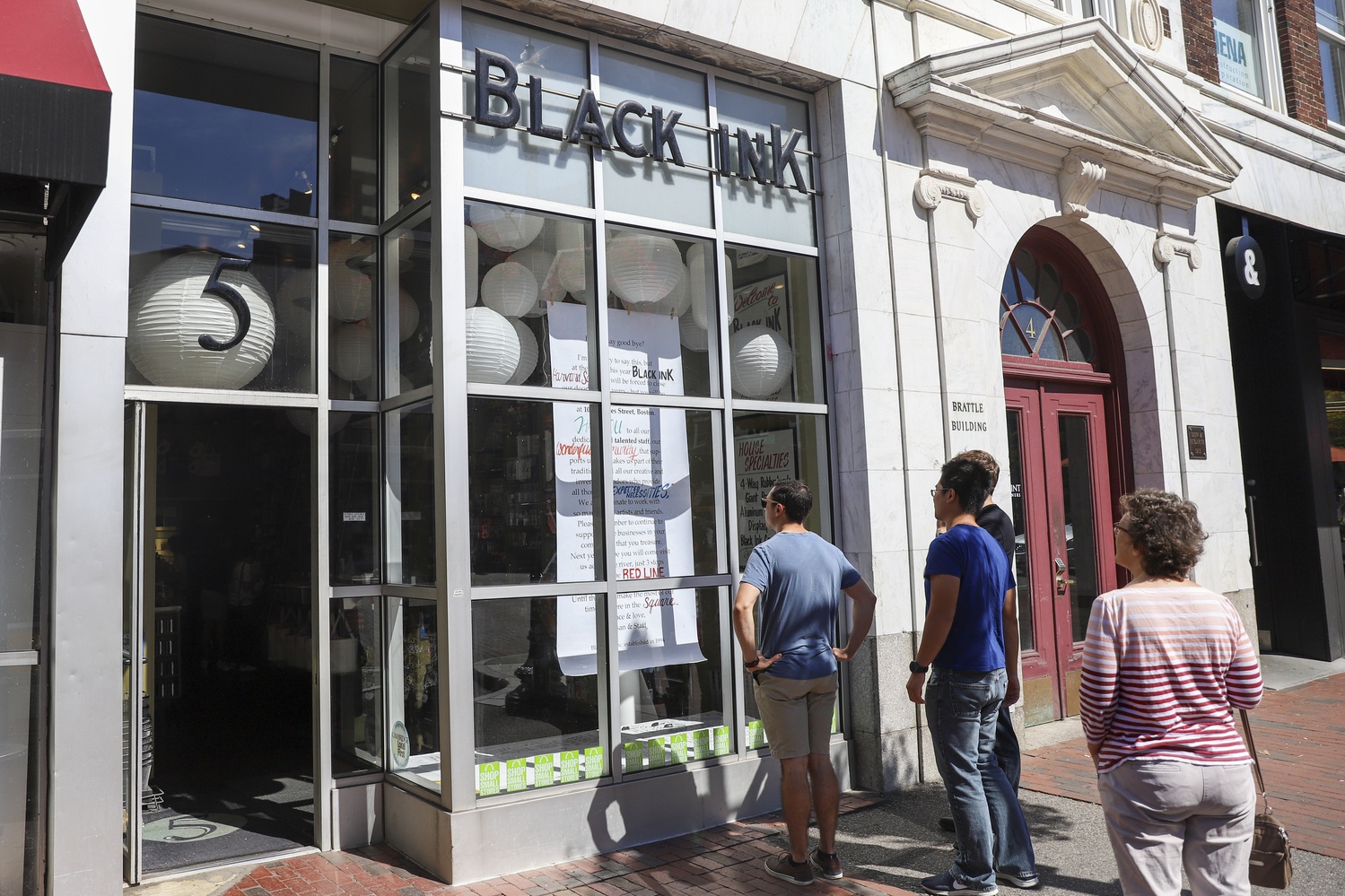 Harvard Square visitors stop to read the sign in front of Black Ink, which is shutting down amidst rising rent. By Sung Kwang Oh
By Ellen M. Burstein and Sydnie M. Cobb, Crimson Staff Writers

Black Ink, the stationery store that has furnished Cambridge residents with greeting cards, art supplies and decorations for almost two decades, is set to leave its Brattle Street location by the end of the year.

Black Ink’s impending departure —a result of rising rent prices — has set off a wave of criticism against the North Carolina-based development company Asana Partners, which owns the property. The closing comes at a time of extensive commercial turnover in the Square; Urban Outfitters, Crema Cafe, and Chipotle, among others, have all closed their doors in the past year.

Susan L. Corcoran, who founded Black Ink with her late husband in 1994, said she had difficulty negotiating rent prices with Asana Partners. She alleged that Asana representatives were difficult to contact throughout the negotiation process and that she had to hire a lawyer. Her lawyer eventually told her that Asana would only accept a rent price she believed was “unsustainable.”

Representatives of Asana could not be reached for comment.

Ahead of its closing, Black Ink has launched a feedback-based project called “Dear Asana Partners” which has garnered dozens of comments from local residents lamenting the loss of Black Ink and other former Square businesses. Store workers placed large sheets of paper in the shop and invited customers to share their thoughts on Asana and the commercial turnover in the Square.

“Harvard Square is now a ghost town,” reads one message.

Another charges that Asana Partners is responsible for “destroying the neighborhood.”

When Black Ink closes its doors in December, it will be one of more than 11 businesses to leave the Square this year.

Customers have also used the project as an opportunity to vent their frustration with Cambridge city officials. One message scrawled on the corner of the sheet of paper reads, the “Cambridge City Government has failed us.”

“I know that the Cambridge City Council and the city of Cambridge is very concerned about what’s happening to small businesses and local businesses — rents are through the roof and it’s pushing places like Black Ink out,” McGovern said.

The Cambridge City Council ultimately cannot intervene in property transactions as it cannot tell a property owner how much to charge for rent, according to McGovern. But McGovern criticized Asana’s approach to their real-estate decisions, stating that those decisions could impact the future relationship between Asana and the Cambridge City government.

“[Asana] gave a lot of lip service to what good neighbors they were going to be and how they were going to support local businesses. They haven’t done that, and it’s been frustrating — I’m very upset about that,” McGovern said. “I have no intention of supporting an organization or a company that doesn’t support the local community.”

Denise A. Jillson, executive director of the Harvard Square Business Association, said that more than 70 percent of businesses in the Square are independent businesses.

She added that HSBA is limited in its power to intervene with commercial turnover.

“We can’t tell [Asana] what to do, we can only strongly suggest that there are things that are important to us in Harvard Square and certainly maintaining a district that is unique is part of the draw and part of the experience,” Jillson said.

Corcoran said she plans to continue gathering community input via her feedback project. Several local residents have said they will miss the store once it closes, though its Beacon Hill location will remain open.

Lilly T. Grossman, a Boston resident and a pediatric neurologist, said the toys sold by Black Ink are helpful for her work.

“The quality of children’s toys here is superior in that they are simpler and made out of wood,” Grossman said. “That’s important for kids’ development.”

Corcoran said she will eventually present to Asana Partners the community grievances she gathered as part of her project. She said the project is an expression of “anger, disbelief” and a means of expression for people who “feel like they’ve lost control of their community.”

“The community did not feel heard or represented,” said Corcoran.