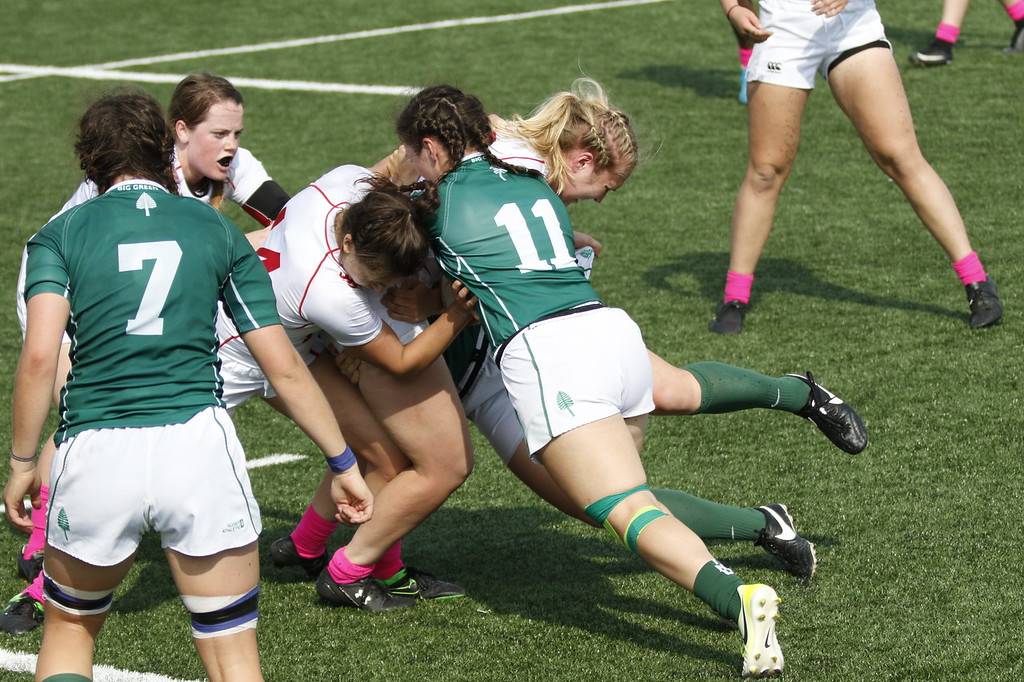 The Crimson will have to recover in time to play Dartmouth in its home opener next weekend. By Timothy R. O'Meara
By Lucy Connor, Crimson Staff Writer

After a dominating win against Quinnipiac in its season opener, the Harvard women’s rugby team suffered a decisive loss against Army West Point on Saturday, falling 34-10.

Though the Crimson (1-1) controlled the tempo for the first ten minutes with multiple opportunities for a try, Harvard came up short and the Black Knights (1-0) scored the first two tries of the game to make the score 10-0. Shortly after, Army scored two penalty picks to further extend its lead by six points.

“It was definitely a very physical game. We knew that going into it. We started out pretty strong in the first few minutes, but we just had a hard time simply playing our style of play,” said co-captain Emily Prentice. “Army is a very tough and physical team, and we ended up getting behind early on so we had to keep fighting to try to get back in it throughout the whole game.”

The Crimson eventually did respond with senior Virgina Miller’s first try of the season, which made the score 16-5. However, this hopeful Crimson momentum was short lived, halted by another Black Knights try, making the halftime score 21-5.

“We went into the game with the mindset that it was going to be a hard, physical game and that we would take some hard hits,” said co-captain Robyn Beese. “We expected the physicality but did not necessarily adapt.”

Though Harvard continued to fight to get back into the game, Army scored two tries in the beginning of the second half to push its lead to 31-5. Though hopes of a comeback were fairly far fetched at this point, the Crimson did not give up.

“We did a really great job of keeping up the positive chat throughout the game and encouraging one another,” said Beese. “We continued to display confident body language and we maintained positive attitudes even if the game wasn’t going particularly well for us.”

Harvard did maintain its composure after 25 points and eventually came up with a response. Freshman Brogan Mior scored her second try in two games to make the score 31-10. After the Black Knights scored a penalty kick in the final few minutes, the final score came out to be 34-10.

“We graduated eight of our seniors and got eight freshmen to replace them. You can imagine how this shifted the team dynamic. I think this game gave them the intense college rugby experience they’ve never really seen before,” said Beese. “So it was a good learning experience. We will come back stronger.”

Prentice also suggested the intensity of the game will be particularly helpful looking forward.

“I think this was a really valuable game to have early on in the season. It was really good to experience that pressure and have a big challenge of a game,” said Prentice. “It will be really beneficial to see how we are securing our own ball, how we are defending, and how to play under that kind of intense pressure.”

While this game was a tough loss early on in the season, the Crimson will use it to prepare for its first home opener this weekend against Dartmouth, a strong team Harvard has been going back-and-forth with over the past few years.

“We try not to focus on a rivalry with teams and just try to control what we can do. However, we are very good at coming back from a loss, and I think this game will actually really give us the fight we need to beat Dartmouth,” said Beese. “We just need to focus on what we can do and control the controllable.”