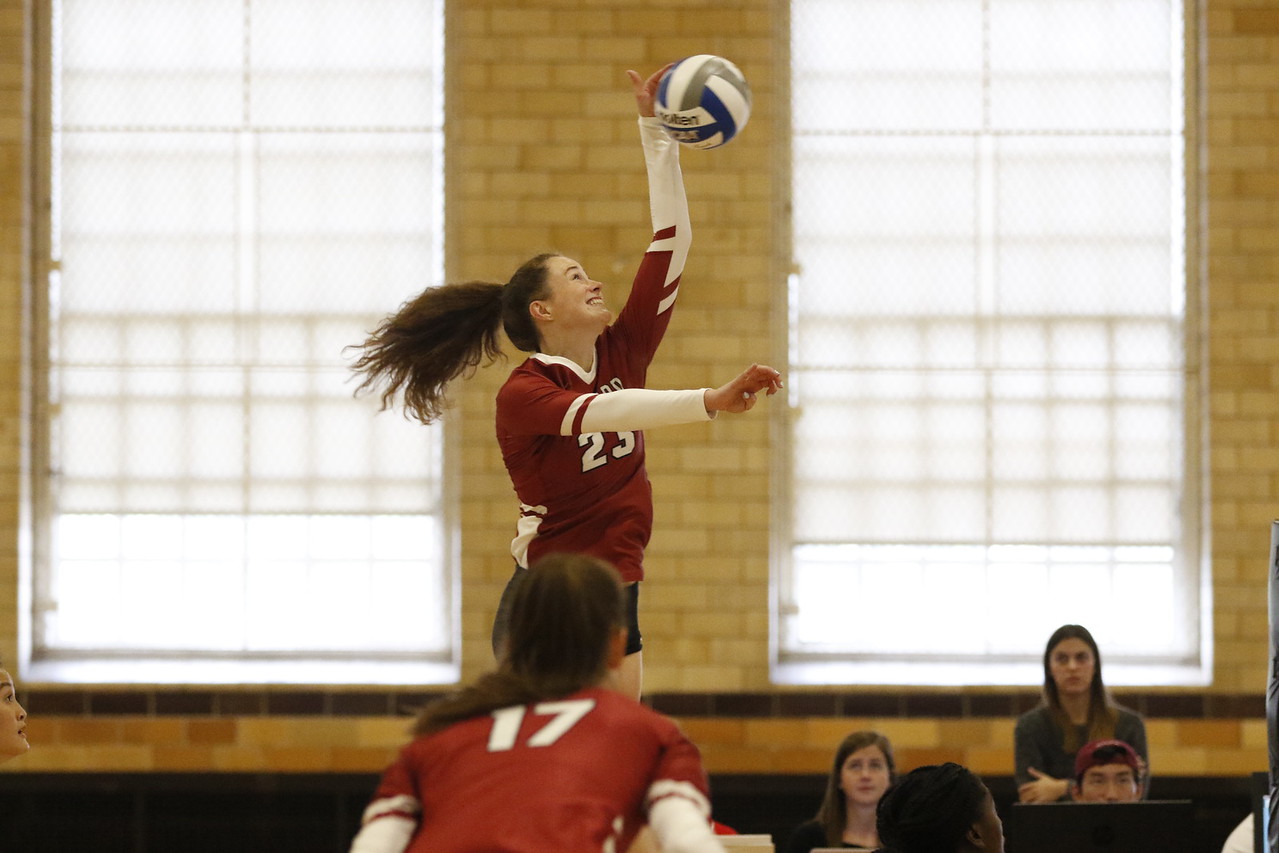 Women’s volleyball opened its season hosting the Harvard Invitational, as Colgate, Rhode Island, and Sacred Heart made their way to Cambridge for the weekend. The Crimson returned 11 letterwinners to the squad, looking to bring an experienced mentality to games and mentor the four freshmen joining the team. While the squad hit a stumbling block against Colgate, it bookended the season’s first loss with wins.

Looking to bounce back from its first loss of the season, Harvard faced off against Rhode Island (1-5), a team which had yet to find a win in the invitational.

A back-and-forth first set saw both teams hitting above .300 with the Crimson recording 18 kills and the Rams tallying 14. Coming down to a score of 23-23, Rhode Island edged out the set win, taking a 1-0 lead in the match.

Yet the story of the weekend for Harvard has been the response to a set loss. Once again, the squad rallied back to win not only the second set, but the next two as well to end the match in four. The Crimson recorded at least 14 kills and a .300 percentage in all four sets of the match, displaying its dominance over Rhode Island in the final game of the invitational.

Colgate (5-1) entered the match seeking to extend its three-game win streak against Harvard. Both teams came out strong, combining for 30 kills in the first set, which was separated by four points in Colgate’s favor. Both teams hit over .400, percentages not repeated for the error-plagued remainder of the game.

The Crimson found itself down two sets to none going into the third. With its back against the wall again, the squad was able to put on a dominant performance, holding Colgate to a .000 percentage and tallying 14 kills against the Patriots.

However, the third set’s surge was not enough, as Colgate bounced back to finish the job and win the fourth set. The Patriots’ .252 hitting percentage and 55 digs in the match propelled them past Harvard’s .183 percentage and 38 digs.

Despite the loss, several players put on good performances. Zeng led the team in digs again with 12. Gray recorded a career-high in kills with 14, and Adeleye tallied seven blocks, showing the same defensive impact as the day before.

The Crimson began its season facing off against Sacred Heart (2-4), which came into the Harvard Invitational following a 1-2 outing in the previous weekend, when the Pioneers travelled to the nation’s capital to play in the Georgetown Invitational.

Harvard came out hot against the Northeast Conference preseason favorites, securing a victory in the first set after hitting .282. Sacred Heart quickly responded, however, winning the next two sets while hitting .290 and .424, respectively. The Pioneers combined for 34 kills during the second and third sets, quickly slowing the Crimson’s roll.

Facing a loss in the match, Harvard quickly rallied back. Led by Adeleye’s 14-kill performance — both a team and career high — the Crimson won the next set to force a decisive fifth. Tallying 12 kills and hitting .455 while holding Sacred Heart to a whopping .000 hitting percentage, Harvard won the fourth 25-12. In the final set, the Pioneers were held to hitting .100, where they lost by two points to drop the match.

Alongside an impressive performance from Adeleye, freshman Ashley Wang added 22 helpers and Zeng led the way with 12 digs. The squad left the first night of the tournament victorious.

Looking forward to the next weekend, the Crimson will be travelling to the West Coast for the UC Santa Barbara Invitational, facing La Salle, San Diego, and the host, UCSB.