Women's Ice Hockey Mid-Season Update: The Postseason Push Is Ahead 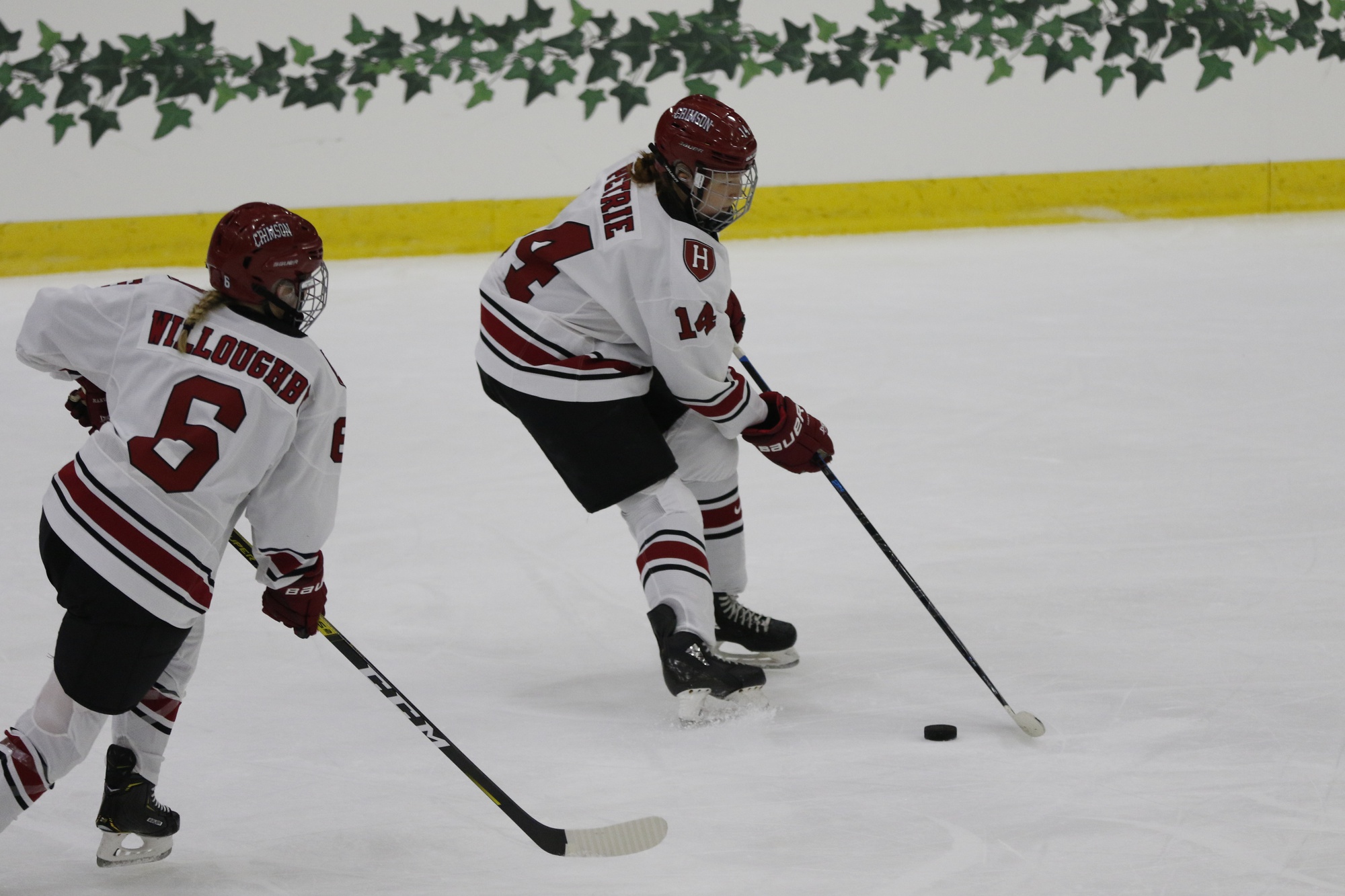 The 2019-20 season has been a roller coaster for Harvard women’s ice hockey. It is true that the season has primarily featured highs, such as a 5-0-0 undefeated start and another five-game win streak that spanned the winter break. That said, in between the two spotless runs, the Crimson experienced winless 0-4-0 and 0-3-1 stretches. Last weekend, the squad snapped the streak of going on streaks, splitting a weekend series between a win and a loss for the first time this season. The result now in the books and the ship steadied, the season stands at a pivotal moment.

With the split, while the Crimson only gained two of four points against its opponents, the 1-1 road stretch can be a building block for Harvard. Against St. Lawrence, the team fell behind 1-0 in the first yet managed to come from behind with two goals in the second. Knotting the game, first-year forward Cecilie Ehrhard earned an assist and her first career point for Harvard by firing a shot on net, which junior forward Brooke Jovanovich collected for a rebound goal. Breaking the tie, sophomore forward Kristin Della Rovere battled through a one-on-one for what would become the eventual game-winner. The tally put Della Rovere at 22 points for the season, second on the team only to sophomore forward Dominique Petrie, who has recorded 27 points thus far in the 2019-20 campaign. With the score locked at 2-1 and the game still up for grabs, the Crimson had to stave off 15 shots and a penalty kill in the third period alone to keep itself in a lead, aided by a 38-save performance from sophomore goalie Lindsay Reed.

Nonetheless, Harvard survived Canton, N.Y. Despite entering the game on a four-game winless streak and facing heavy final-stanza pressure, the team did hold on for a critical win. The next day, against the No. 7/7 Golden Knights of Clarkson, the scoreline ultimately read 4-0, but Clarkson did score three goals in quick succession in the final period to convert the 1-0 nail-biter into a comfortable 4-0 result. Beginnings and ends of periods set the tone for everything that comes in the middle, and by jumping out to a second goal just 35 seconds into the third, the Golden Knights facilitated its two next goals that would eventually ice the contest. While the final showed Clarkson dominating the game, Golden Knights scoring only really defined a period. So, while Harvard is not seeking moral victories when it laces up the skates, in tandem, the weekend results present a path forward.

Despite recent ups and downs, at 11-8-1 and 10-4-1 in the ECAC, the team remains among the best in Division I women’s ice hockey. In fact, in the major polls, the Crimson remains a top-ten team. In the ECAC, the team currently ranks tied for second in league points with 21. However, despite the points lead over all but the Cornell Big Red, who have 26, a trio of teams actually have better winning percentages. Princeton shares second place with 21 points as well, but in one less game. Meanwhile, both Clarkson and Yale sit at 20 points in the standings, and each of the two teams has played one less game than the Crimson, just like the Tigers. So, while Cornell has a decent cushion over its nearest competitors, spots two through five in the conference are largely up for grabs (with a sixth-place Colgate team within striking distance as well). To illustrate the parity among the teams jockeying for top spots, consider Harvard’s performance against them. Against the Bulldogs, the Crimson skated to two wins. With the Tigers, Harvard claimed three of four points but could not finish off Princeton at Bright-Landry. After three unanswered Crimson goals, the Tigers found the back of the net to force overtime in the last minute of the game. And, as mentioned, while a different game than the scoreline may indicate, the Crimson fell to Clarkson on the road. With the Golden Knights, however, Harvard will have a chance for revenge in late February as the upstate New Yorkers make the trip to Boston for a rematch.

With key positioning in flux, there is a lot to play for before the league table settles and sets an ECAC playoff bracket. So, in a series of winning and losing streaks, after splitting a weekend series on the road and ending one of its down stretches, Harvard finds itself at somewhat of an inflection point. While the Crimson only has one game on the books this weekend—against Dartmouth on Jan. 31—this weekend represents an opportunity to shift and stabilize momentum as Harvard prepares for a critical four-week stretch that will determine its postseason fate. The Big Green has only mustered a 5-13-3 record so far, and in the season-opener, Harvard managed to put seven goals past the Dartmouth defense. While the game is winnable—and critical—for Harvard, opponents up and down the ECAC standings have proven that they can hang tight in any game. For instance, against Quinnipiac, a middling team in the ECAC standings that also skated to a tie in one of its matchups against the Big Green, the Crimson barely won a road game in overtime and also dropped a 2-1 decision to the Bobcats. While it is cliche, it is also true—for the most part—that anyone can beat anyone in the league.

What’s more, immediately after the lone game against Dartmouth this weekend, Harvard will head directly into the Beanpot next weekend, facing off against its Boston foes and looking to claim a championship before the season even ends. In the tournament, the Crimson will start in the deep end of the pool, facing off against nationally third-ranked Northeastern. In the consolation or championship, Harvard will see another top-caliber opponent, with another top-ten team in Boston University and a formerly top-ten team in Boston College making up the rest of the field. Although the annual Boston fixture will not count towards conference play, Harvard will have the opportunity to prove it can defeat the nation’s best teams—not to mention the chance to avenge a heartbreaking overtime loss to the Boston Terriers in last year’s Beanpot championship and to claim the Crimson’s first crown in the February showcase since 2015.

Whether against Dartmouth, in the Beanpot, or beyond, the offense will have to reemerge in the near future for Harvard if it wants to play the kind of game that it did immediately before and after the winter break, which saw a road win over archrival Yale and two seven-goal barrages, including on the road against a then No. 9/9 team in Boston College. On the season, Harvard has averaged 3.05 goals per game, but in the last six games, the Crimson has only registered eight, for 1.33 goals per game on average. Even in the win against the Saints of St. Lawrence, Harvard only scored twice. In the preceding five-game win streak, the squad put up 24 goals (4.8 per game). And the goal-scoring extends beyond just generating chances but also necessitates finishing them. In the last game, for example, Harvard and Clarkson completed the game effectively even in shots on goal, yet the Golden Knights walked away with the four-goal advantage.

Only eight teams—and only four automatic qualifiers—ultimately make the NCAA Tournament. Thus, setting up the highest seed possible in the ECAC tournament and building a non-conference resume that could earn an at-large selection set the stakes for the remainder of the season. Conference points are at a premium, and signature non-conference performances provide the icing on the cake to a tournament resume. Both pursuits will be on the table for the Crimson in the next week.

Friday’s game faces-off at 6:00 p.m. at Bright-Landry Hockey Center against Dartmouth, and then Harvard will travel to the Beanpot host venue, Walter Brown Arena of Boston University, on Feb. 4 for a neutral-site showdown against the aforementioned Northeastern Huskies in the tournament semi-finals.